Hi, i realise that new york buildings are very dark. There is any way to fix that?
Is the same at any time
The picture is from far, but flying over the buildings is also dark
Miguel

First of all, you’re looking against the sun. It’s obvious that this side of the buildings is dark. With the bright sky you get a harsh contrast and that results in the darker skyline.

Plus, photogrammetry buildings in many cities have that issue in the sim that they look rather gray-ish and darker than their real counterparts. I guess this is based on the quality of data that Bing has for these cities.

Here’s how it looks for me with the sun in another angle, so I can’t confirm it looks too dark “at any time”. 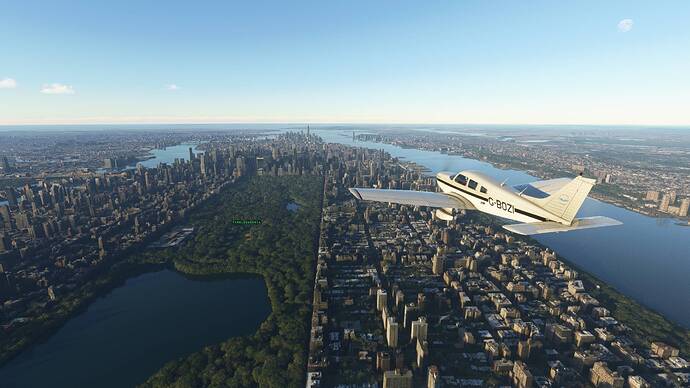 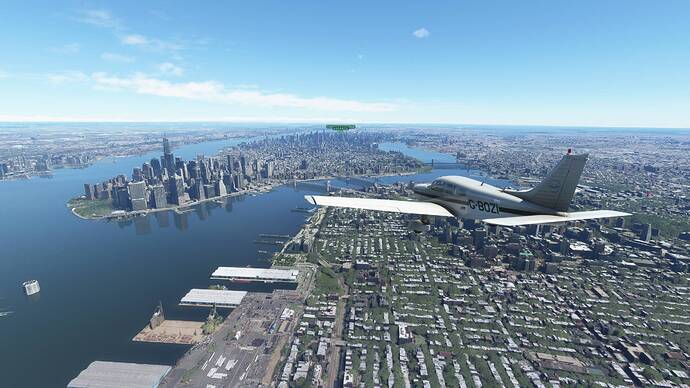 It makes me wonder…how amazing this sim would be, if it was made by google instead of MS (flag alert detected, I know)

I have noticed the darkish effect of the photogrammetry also. It seems shaded a bit too dark, maybe they can tweak the light effects placed on photogrammetry data on the server. A puzzling time for me is midday noon-ish hours 1000-1400. The sun is directly above, so there should be enough light to highlight tops and partial sides of buildings, just like natural. Processing of raw photogrammetry quality should rest on the server, with perhaps some adaptation at download time.
I also agree that the ANGLE of sun light in early and late hours in daylight, combined with the direction you are facing has everything to do with it. These secondary factors of location probably are best handled on the client side.

As every photographer knows that is usually the worst time of day to take photos.

Now you know why, too.

With regard to light angles, i find myself “setting up” my city approach angles, not to land, but merely to get the best photogrammetry view i would like to see. I try not to fly the dark side, just because it looks like the natural light has all been artificially turned off. I’m hoping they can tweak the photogrammetry lighting, or at least give us sliders in the options to vary how much light/dark to adjust the photogrammetry effects.

Of course is not as dark as my picture always,depends on the time, but in general the new york scenery is very dark. If you go for example to madrid, is much better.

Thats true, i’m not a photographer, but i have been in helicopters, and seen drone videos in New York at midday and the buildings and rooftops are vibrant. If i saw that from my plane, i would like it.

Having a few cities that are not photogrammetry but spuced up with a cityscape DLC can look great and be a nice change - Orbx Sydney comes to mind.

Photogrammetry has fantastic detail but it’s also rather static, colours can be dull, doesn’t show PBR materials and the photogrammetry doesn’t work well in a few places - overall though I’m glad it’s in the sim because when it works it looks incredible.

Hummm, I will look for this cityscape! Tks!

It makes me wonder…how amazing this sim would be, if it was made by google instead of MS (flag alert detected, I know)

There’s nothing wrong with your post that I can see. Expressing negative feedback is okay as long as it is done constructively.

That being said, on one of the past Developer Q&As, it was stated that one of the issues with photogrammetry is that they are simply 3D photos. They would need some kind of information about the building materials in order to edit their reflective properties. Maybe this will happen with AI in the future, but I’m guessing it won’t happen tomorrow.

Dont they have profiles already on which type of buildings (hence structural materials) are typically found in cities, and sections (CBD, resort, residential etc). Furthermore, don’t they have profiles of different cities in the world. Seems to me they have enough data to extrapolate the type of sunlight/ambient light one would expect based in what the Satellite data is telling them.
I dont want to fly over Miami or Honolulu with the same assumptions as New York or Las Vegas. The density and heights of buildings seem to be the critical factor to prescribe lighting adjustments as seen from a flyover.

Photogrammetry unfortunately has a few shortcomings. Looking very static (in terms of lighting) is one of them.
It may help to disable ground shadows for photogrammetry scenes and also maybe switch off contact shadows as they could add additional darkening. Make shure to set Time Of Day/Year (sun direction) according to baken shadows.

lready on which type of buildings (hence structural materials) are typically found in cities, and sections (CBD, resort, residential etc). Furthermore, don’t they have profiles of different cities in the world. Seems to me they have enough data to extrapolate the type of sunlight/ambient light one would expect based in what the Satellite data is telling them.
I dont want to fly over Miami or Honolulu with the same assumptions as New York or Las Vegas. The density and heights of buildings seem to be the critical factor to pre

My guess is rather that with all the data streaming needed to display photogrammetry (opposed to landmark addons like from Orbx which are installed locally), transferring material details for each building would require even more bandwidth - and they need to cut corners somewhere to make it work.

I for one would be happy if photogrammetry would be a bit brighter and more colorful. Downtown Manhatten has colorful buildings in real life, but in sim they look rather grey-ish.

Well, too dark or not too dark - I think basically much changes with DX12. Right now the sim does not take advantage of raytracing cores as DX11 simply does not support these.

On the other hand raytracing can provide indirect lighting which may make objects on ground brighter in such situations. So let’s wait for now

I think you guys expect a lot more from DX12 and RayTracing than it can ever deliver. You better expect to be disappointed.

I don’t see how RayTracing might affect the issue discussed here at all.

Where that really shows is Miami. Photogrammetry is just too dark.

I jump on every chance I get for Payware scenery cities, Samscene3D NYC is absolutely gorgeous. I much enjoyed the standard NYC before hand, that addon makes it wicked.

Great recommendation. Just picked up NYC and did a sunset Hudson River VFR. Absolutely beautiful. It looks awesome during the day as well. Makes the corridor flight much more fun. I’d purchase a part II of that going up to the Tappan Zee.