We need Force Feedback back!

I remember, a very long time ago, I had a force feedback Joystick, & it was incredible.

Imagine feeling the rumble as your wheels touch the runway on landing, or the flutter of your wing when you’re just about to enter a stall, or the thud of your landing gear retracting.
More importantly, Trimming the aircrafts pitch in real life is dependent on the forces feeding back. i.e… you trim until the yoke is no longer applying resistance to you.

So what happened to Force Feedback joysticks?

As far as I know, the rights for force feedback where purchased by some evil venture capitalists, & they held onto them tightly. No-one was able to afford the insane cost of buying the rights to use it, so never bothered developing the idea. There was a swiss company that offered force feedback joysticks, but you may as well have bought a private airplane for what they where asking.

It appears that the patent has finally expired though, so the door is open to develop Force Feedback peripherals, & there is no better time in history than now.

Could we all band together & put some sort of pressure on Microsoft to get them in development again?

We could Force them to give us some Feedback on whether they’re relooking at developing them again. Haha, sorry I had to throw that in.

What I meant I guess is to let them know that there is still an interest in Force Feedback functionality. They where the first to do it as far as I know, & they have the financial clout to get it going again.

Is it worth using the older Microsoft versions from back in the day?

Yes, if you can still find one. They’re highly sought after these days. I use mine in DCS mainly for helicopters, because the trimmer works so much better than with a spring based joystick. I also found it pretty good in WW1 and WW2 aircraft when the FFB effects have been implemented so that you can feel a stall developing before you lose control, and they don’t need lots of HOTAS inputs.

With no current “In production” affordable Force feedback devices for Aviation, why would any company spend money & resources to support a non-existant device ?

Respectfully to you, that post is contradictive & doesn’t make sense to me.

It sounds like you’re saying “If it doesn’t exist at the moment, why should anyone bother trying to make it?”
Integrating FF into joysticks is not rocket science, it just wasn’t a possibility in the past because the patenting costs where criminal.

Who is currently producing an Affordable FF Joystick/Yoke for the typical MSFS user ??

It may welll be a question of “Chickens and Eggs”

Who is developing one? that is the question. I wish there was, & I would like to discuss with my forum friends what they think about it.

I think we’re both talking at each other without listening at this point.

Agreed, if MSFS really simulates so many points on the wing then amazing feedback through the stick could be possible now. If the patent is really expired then I would also like to know who is working on this and what we can look forward to !

Although you seem to be getting a lot of negative feedback here I actually think that you have opened up a very interesting thread. Well done and all credit to you

I briefly looked at the patent situation 2 or 3 years ago and I thought that the company owning the patent was intending to renew it. Maybe this has changed I don’t know. I just presumed the patent was still ongoing and that was one of the reasons why the cheapest new FF joystick was over £1000.

) then yes I would be very interested in a version about £100 or so if that would be achievable. I think quite a few other simmers would be interested too (gut feeling only since I have no actual figures) given the amount of cash we all seem to spend on getting that bit extra immersion.

I actually gave up on waiting for a FF joystick and I use two bass shakers now instead with bass shaker software. Have you tried anything like this? They are quite immersive when they are tied to flaps, engines, turbulence, touch down, ground, canopy, take off etc.

I agree, Force Feedback needs to be a thing again. It’s an added dimension to feel the forces on your control surfaces and allows you to properly trim your aircraft.

I took a quick look on Amazon and I only saw ONE Force Feedback joystick available.
I did see ONE Microsoft FF Pro that was offered by one company, only 1 in stock.
That is a very old joystick and I do not see any mfg. making a ff joystick now.

I took a quick look on Amazon and I only saw ONE Force Feedback joystick available.

If it’s the one I saw then it looks like a kit which you put together yourself. Unfortunately there are no reviews on it so there is no customer feedback to say whether it is any good or not. Not a positive sign really, at least to me

Also it also doesn’t seem to mention any software either which may be required to drive it. Can’t see it just working by itself tbh so would want a bit of clarification before buying. No mention of any motors either to drive the stick

I read this and did a bit of ‘googling’ but I think that the patent copyright on FF could be a bit of a minefield.

I think that some of the patents relating to FF might have lapsed but that there is a possibility at least of some (tens or hundreds??) of other patents still active which could also cover FF and might restrict a licence free FF joystick.

I am not convinced that it is really as clearcut as some of the guys on that forum think.

I’m not a patent lawyer (thank goodness!) so I could easily be wrong. Anyway, I think this one is a bit beyond my knowledge to comment much further.

It is listed on Amazon. I have included a screen shot.
It is the VERY OLD MS FF Pro… Manufactured decades ago.
Doubt you would want that even if it was still in some dusty warehouse somewhere.
I used to have the Non-ForceFeedback version and it was a simple USB connection and worked with a variety of flight sims. I threw it away a few years ago because it was not built very well and gets unsteady and erratic after several years of use. 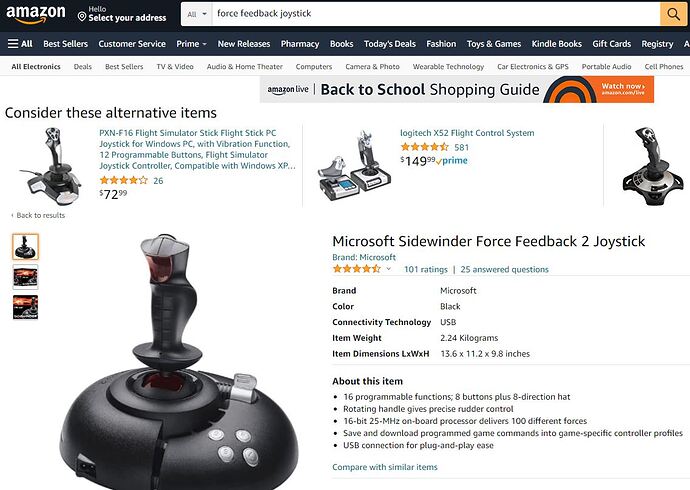 Ha … Thanks for the reply

I remember seeing these when they were new. In hindsight I should have bought a couple or so.

Might look at buying a Time Machine to make a few bucks. I’ll have a look on Amazon to see if they have one for sale

Austin Meyer made a video about force feedback a while back. One of his comments was on how it was implemented, and not the hardware, but rather how the software drives the hardware. I believe he was reviewing one of the Brunner yokes. He pointed out that the vibration felt from an idling engine bared little resemblance to the RPM. It seemed to be a case of garbage in, garbage out. 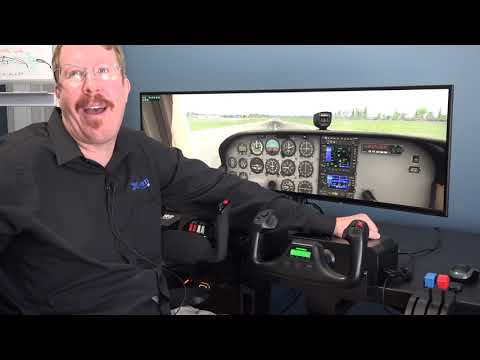 Quite honestly, for my Yoko, what I would like to see is variable resistance on the bungy cords. So when you are at low speeds, you would have moving arms that would reduce the tension on the cords, making the yoke move easier, then as your airspeed builds these arms would tighten the cords, and make you use more effort to move the yoke, rather than the static feeling we have now.

If you want to have a discussion about force feedback, no problem. Regarding Wishlist, though, there are already two topics:

Release new joysticks and yokes with force feedback. The old sidewinder was legendary, lets bring it back. Force feedback adds a whole other to immerison, combined with VR and the stunning scenery for FS2020, this would almost complete the immersion

So, this is being moved to General Discussion.

As I posted in another topic just a few days ago, force feedback is the thing I miss most since fsx. I agree it’s very immersive, and took me a while to get used to the tame non-ff joystick when I switched to XPlane. I’d love it to appear in fs2020.

Regarding which would come first, the hardware or the software, MS of course are in a position to do both, as they did before. If we can prove there is a market for it, they may take the hint. So vote for ff, and let’s try and get this to move up the wishlist.