I guess I’ll have to wait for the G3000 to come to the market place. I looked at the github page I don’t have a clue what I’m looking at.

It is a mod from Working Title for the glass cockpit for these planes.

It will not come to the Marketplace. You download the “Mod” and install it into your “Community Folder”. It replaces the existing cockpit.

This is a mod for MSFS2020 that aims to improve the in-game G3000. The goal is to bring functionality closer to the real-life G3000, with a focus on both features and layout/UI. Most of development and testing was done with the TBM 930, and the TBM 930 version of the G3000 pilot’s guide was used as the primary reference.

This mod was created with cross-compatibility in mind. It modifies the minimum number of base files possible to achieve its goals, so it should be compatible with most other mods, including all other WorkingTitle mods. However, because of the nature of the mod, it will conflict with other mods that make changes to the G3000.

NOTE: This version of the mod primarily makes changes to the TBM 930 for now. The Longitude, which also uses the G3000 codebase, will get some of the cosmetic improvements included in the mod (such as updated terrain colo

Exemplary! This is exactly how I would like the updates from the flight simulator to be documented.

The G1000 NXi is on the marketplace, I’m hoping the G3000 mod also comes to marketplace

Okay. Thanks for the correction.

I’ve never gotten my WT CJ4 Mods from the Marketplace
and didn’t know they were there.

Never noticed them there.

Edit: I checked the Marketplace.

Sorry, but:
The G10000 NXI is there as free and installed, and updated and owned
on my Marketplace but the G3000 is not.

I don’t even remember installing it. Probably the batch “all free uninstalled”.

It might be so they can be used on Xbox.

Fingers crossed that the other mods get released on there too

Added brightness settings page on the PFD. Where exactly is this because I don’t see an option for this. I’ve updated to version 2.0.

I was looking at the PDF opt key. Thanks

Please help me. Where is this “Menu” button?

No problem. It took me quite a while to figure out where to access the setting. I was also looking (at first) under PFD options!

Had thought that having the DA40 NGX and the NXi installed together was the reason I was getting CTDs. But it turns out that just having the NXi by itself installed will eventually give you a CTD on a G1000 aircraft. Just happens quicker if you also have the DA40 NGX installed. While it nice to try new stuff, something this unstable is probably not suitable for a marketplace release.

For what it’s worth, I didn’t encounter any CTDs during an hour-long flight in the SR-22 with the NXi installed earlier. How long do you find it usually takes?

Last night I flew for an hour with no CTDs with just the NXi installed. This morning was checking a new livery I was working on and got a CTD every time I tried to load the same flight. Then unistalled the NXi and the same flight that previously had CTDs this morning, loaded without issue. Definately something odd going on. The only CTDs I have had since SU5 have occured with the NXI installed. So far anyway.

Do the crashes occur with a specific plane? In a particular location? Do you have other third-party/community planes installed? (In the past I’ve had crash issues related to third-party planes when they appear as static traffic, which makes the occurrence pretty inconsistent and hard to track down.)

While it nice to try new stuff, something this unstable is probably not suitable for a marketplace release.

Since this is a JavaScript instrument, it should not be possible for it to crash the sim. JS that crashes simply stops running, just as in a browser, JS errors do not crash the browser instance.

That being said, we are keeping an eye out, as there may be an underlying simulator bug at play.

Thanks for your reponse. I always say that MSFS likes to feel your pain before it gives in. I’ll take your word that the NXi shouldn’t be able to cause CTDs. However the only CTDs I have had on MSFS since SU5 have been when I was using the NXi. The last CTDs were repeatable and only ceased when I uninstalled the NXi. But MSFS is a tricky beast so nothing is guaranteed. If I experience any further CTDs with the NXi not installed I will update with a new post.

I am experiecing CTD with the Baron G58 and the NXi mod. I will uninstall from content manager and see how it goes.

Departing VNKT (Kathmandu, Nepal) on the IGRI 1A departure using the WT G1000 NXi. Beautiful D4.0 DME arc and merging with the KTM 105 radial to IGRIS. 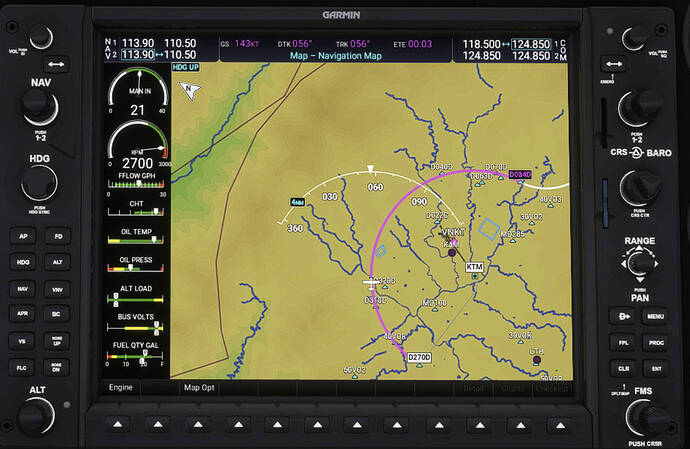 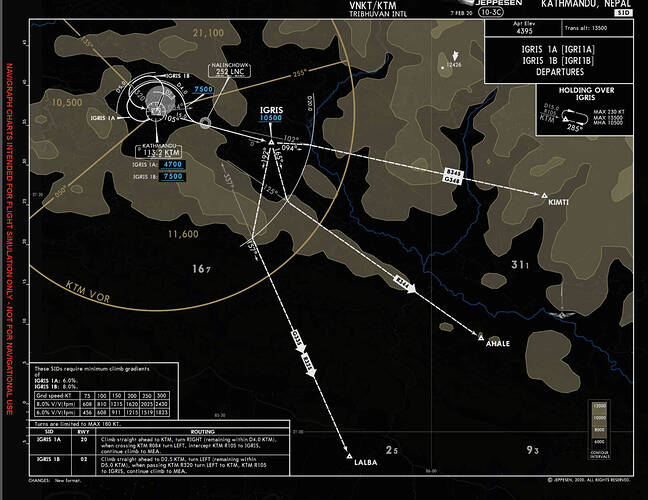