WU6 is awesome for me so far, anyone happy like me?

All in all, really happy.

If you have VR, try the Alps discovery flight - breathtaking

The scenery for Germany, Austria (tried out only these two)
is now incredibly accurate. Of course a few minor flaws exist.
I think I could not distinguish now between photos of a real flight at low altitude from screenshots. The scenery has become so crisp and lively, which gives me a considerably improved kind of spatial perception now. Contrast and brightness improved, and so on …!

Even with only a RTX 3060 I can fly (with only a low frame rate) with all settings at their maximum. A quarter ago all that was unthinkable for me to come soon.

I must say this update is a bit mixed feelings for me.
On one hand 5 ctds in the last couple of hrs testing the sim. I have only the fbw a320nx in the community store and Eindhoven airport. Last on probably caused a ctd and also loading a xbox controller which was off caused one. The rest were ctd or game freezes.

Graphics are great for me and even NYC gives me good framerates… Havent tried LA yet though.

Only thing that still really bugs me, and i know it was mostley a world update and not a sim update, is the ATC. Sometimes i hear the controller, most of the times i don’t and then my copilot tells me i should climb/decent or that there is a plane next to me. On the short hop from KLGA to Washington i was told to climb to 21.000ft then descent to 16.000 then climb again, then back down. Very annoying.
And the a320 cut the approach again. Also a problem not solved yet.
Furthermore the noise in the cockpit, and in some planes the opposite, the silence in the cockpit is strange. Some planes sound your outside next to the engines. And still all streets, especially in very big cities are manifested with large trees… way to many or to large… 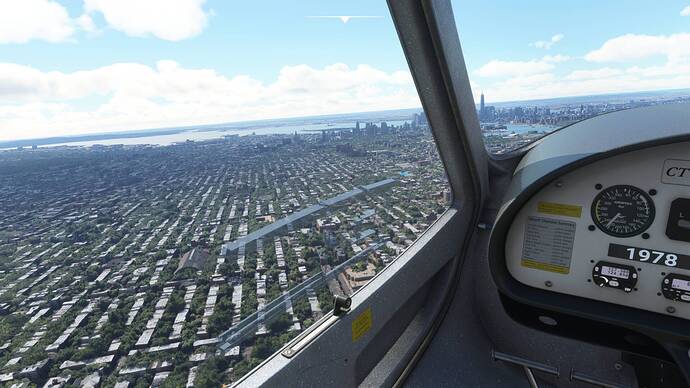 Yes! As per below there are still some issues but a huge improvement for me compared to where we were this morning

Initial thoughts I think this is a good update, and certainly when compared with SU5. I am very glad that the pop in on head turn is significantly reduced. I run VR only, compared to SU4 I can run higher LOD levels at a reasonable frame rate. The maximum photogrammetry draw distance is also improved which is very nice. I think the general image quality may also improved somewhat compared to SU5 but need further flights to be sure. Personally I have 32gb RAM and a 24gb 3090 so I would stil…

I just did a short flight with the FBW A320 all went well. Even the ATC Altimeter Bug in IFR flight has been fixed. So far so good.

Same here! Everything smooth at 2k 60fps with everything set to ultra!

I got three out of four of what I really needed coming out of this update. Not bad at all.

Terrain spike near one of my home fields removed

IFR flying is back and now I can really use the Cirrus.

Smooth sailing for me. No issues with the update. Put my settings to Ultra and carried on my world tour in the DC-6 with excellent graphics and performance. The altitude bug seems to be fixed. Only issue that I’m aware of is the night lighting bug, but that can be worked around on the PC by setting render scaling to 100 (which is where I run anyway). Given that this was a world update and not an SU, I wasn’t expecting too much drama and for the most part we didn’t get any. I do think they will have to hotfix the night lighting bug–especially since it sounds like there is no workaround for X-box. Anyway the world update came at an excellent time as I’m headed back in the Germany/Switzerland/Austria direction, and I adjusted my plans to take advantage of some of the new airports and scenery.

It has to be exactly 100, if you go below you will see no lights! It is an interesting bug lol

Has the bleached out whitewashed saturated look of the world been fixed?

Yep, we need to pressure the team to tackle the morphing now!

ATC still telling everyone in the sky to ‘please expedite climb’

I didn’t get to my altitude before quitting as I couldn’t stand the ATC.

How is this fixed for you guys? I was using AI traffic.

Agree with Cream but also otheres–ATC never shuts up, aggravating, but the sim is working beautifully for me.

Update worked well for me. No performance hits.

I don’t know, as I can’t install it. Windows Store has no update available. First time this has happened to me. Who knows why.
[Edit: after logging in and out of Xbox, and in and out of microsoft in general on my PC, after trying it a few more times, an update appeared in the Microsoft Store.]

It’s definitely getting there.

tell me…can you see the Schweberbahn?

I love the positive post, but it’s also kinda backhanded, like “nothing’s wrong!” People affected by WU6 bugs are night fliers who do not use 100% render scaling. That said, I’m sure the rest of the update is pretty solid, I look forward to exploring the new areas.

I agree , I have not tried night flying , I actually never do , but I understand there might be a bug on this and it is clearly an easy one to fix , we should all expect a hotfix for this in the upcoming days , but the rest for me is awesome and an improvement.

that’s so good to hear after it appears many have had insurmountable problems…I always wait a day or so before downloading a new update just to see what the initial responses are…must admit no problems with any updates as yet, so looking forward to updating tonight (Aussie time)!