Wow ! Since I’ve owned msfs2020 NEVER had a single CTD. Updated to 1.15.8.0, just had my first ever CTD 1 hour into flight at cruise altitude and had stutters to along the way.

Great - I was trying to respond to BufordTx but botched it, what a surprise

Glad you will stop by - anyone that doesn’t quite ‘get’ Multiplayer, I get it too, never really was interested/tried it, in the past but once MSFS came out - got on Discord with a headset, was able to chat and fly and interact, and before I knew it, I was puttering along with FlyCookie6508, doing Twitch and a couple guest spots on the Official Twitch on Fridays.
Would never have believed that, if someone said in less than a year you’ll go from flying totally solo all the time to this kind of interaction.

Replaced my 100mbps router today with a 1000mbps gaming router and my stutters have disappeared during prime time, between prime time I actually hit 50 fps pretty steady no pg no multi everything on ultra @ 1080p.

Nothing wrong with the old router, was getting 90 through it, the new router will now pull 120 on a 100 connection. Kind of wondering if they changed something with the way they transmit the data? I know watching resource meter, my ethernet would go MMM------M–MM-- (M being actual data received and — being idle) and now the ethernet is MMMMmmmmMMMMmmmmMMM—

Everytime I get this fixed it slows back down again, lets hope this is the final fix… I cant afford any more new equipment…

From experimenting, I can confirm that it is not just people flying with custom paint jobs but also 3rd party aircraft. Especially the free aircraft. My friend loaded in with the carbon cub from flightsim.to and my frame rate went to 2fps. When he quit my frame rate went back to 50fps. He loaded in with a default aircraft and there were no issues. There appears to be a serious problem with how flightsim is handling 3rd party addons. Micro stutters are always present on multilayer in general. Rolling back my driver to 466.11 (if I remember well) also helped improve performance.

I would suggest check your vram.If its still happening with low vram usage then the problem is with the game!

I followed your advice after experiencing huge stutters as people formed at our destination airport in last night’s event. It solved the problem and I was stutter free (in VR) for the remainder of the night.

The latest patch always gives some people stutters…before it was all smooth. Think about that

Ok, thanks. I’ll check. I tested this moring and had not much stutters.
Question: my vram was not fully used but I was limited by GPU at 40 FPS. Shouldn’t the GPU be fully used before being limited by it ? 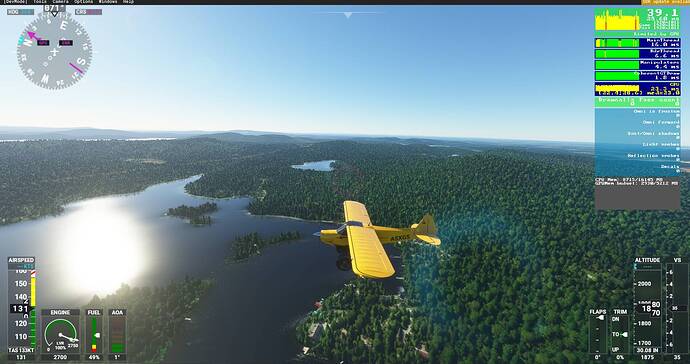 I have them to in KLAX landing area. RTX 3070 VIDEO CARD.

Today it suddenly went down to 10 FPS and limited by Coherentgtdraw, over the sea with no land in sight and clear skies in the C172. Memory usage went up to 27GB of 32GB and page file to 43GB. The stuttering and low FPS went on till the end of the flight.

Hardly get stuttering here on final with a 10700kf 2060super on final approach and that’s with the crj.What cpu do you have? Might me worth knocking some of these settings like traffic,terrain lod down.

Having started this thread, I have to say that the latest 1GB update has removed the stutters for me. Great news! Obviously one still has to be careful with the sliders…

then your computer is .

I experience no stutters after applying the update.

Can you not read English, my friend? I said that the stutters had stopped for me.

That is incorrect.
the sim is heavily under optimized.

what does it means for you Optimized?