Yes, Spring N, Fall South has Sakura.
Do not buy it from marketplace until it gets updated. The best deal is to get it from simmarket.

Lol ok, must be beautiful if it can animate the sakura petal fall & fly by the wind all over xD

Is in the future this mod can be able to automatically change season based on month all over world?

Right now that’s the only way to do manually. If you plan on flying in current season, you only need to copy the folder once every 3 months. You don’t need to do anything unless you want to change season on every flight.

I have a pretty cool idea. As you are adding so many interesting tree species to specific locations, how about creating flight plans as part of the package to tour some of the locations?

I am aware we could do this ourselves but some of the locations where you have added custom trees are not necessarily easy to find and it would be a great way of showcasing your fantastic work as you add more locations and more tree species/3D models.

For example, I know where Joshua Tree National Park is on a map but it was hard to find it using the nearest airport. Eventually I did by guess work after almost giving up.

Anyway, just an idea. Keep up the good work!!

Aw c’mon give the guy a break! He’s already working all his spare time to give us great scenery and now you want him to do flight plans as well?

The easiest thing to do is going on Google Maps, getting the latitude and longitude of the specific place you want to fly by clicking on that point on the map, pasting that in the World Map in the sim and choosing it as the departure point and you’re already there. No flight plan necessary. That’s what I do all the time and I’m already in the air, too. Bijan doesn’t need to make flight plans when he’s already going above and beyond for this project of his. That’s quite frankly asking for too much when we’re all capable of finding these places on our own, especially with Google Maps and Bijan also usually gives the latitude and longitude of the 3D trees he’s added in the notes of the mod.

That’s a great idea… but as others mentioned, maybe someone can create that for those who are interested.
I am planning to do a POI file for all the places I have enhanced but that’s a big task by itself.

New jungles/forests with different size and color variation trees. Flying over forests is much more diverse than before.

Maui, Hawaii: (All Hawaii is done) 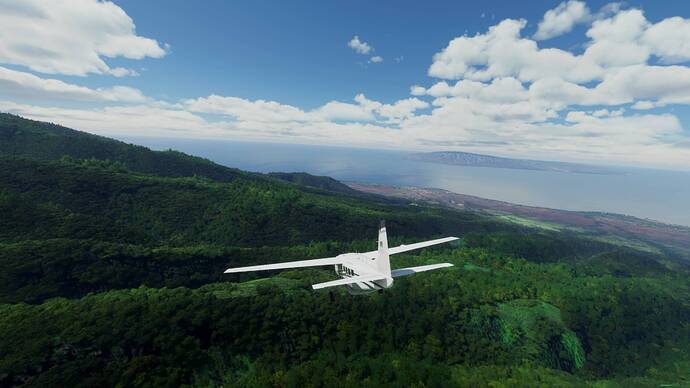 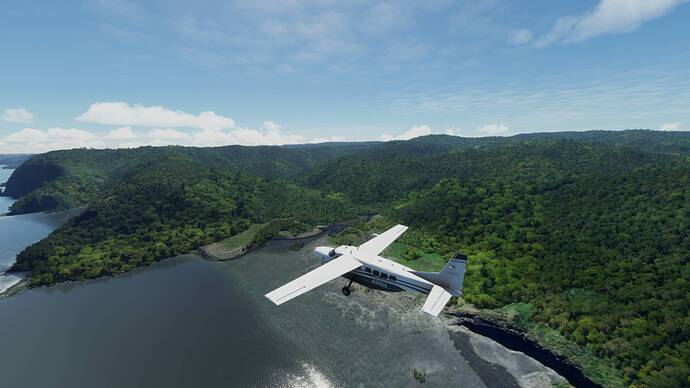 Did a flight over NZ yesterday and it was absolutely stunning going low over the forests. Exceptional work so far and it just keeps getting better!

Thank you. It will be much better with the the forest in next update.

I am planning to do a POI file for all the places I have enhanced but that’s a big task by itself.

Maybe just start off with the 10 or so which are the most impressive and build up the file over time and at your leisure and without any pressure? Could be a good advertising ‘thing’ perhaps for your product seeing some good POIs? No pressure though and I agree that populating the world with viable trees should definitely take precedence over this so it’s not as important as what you are already doing

In particular thank you for your oustanding response to the issue that I raied with you in my recent email.

I made the BIG MISTAKE of purchasing your prouducts in the Marketplace… I wont be making that error again.

EVERYBODY BE ADVISED… AVOID THE MARKETPLACE ALTOGETHER. in not updating products, even though developers have sent them updates weeks ago, they are treating their customers with complete contempt.

We need decent developers like Bijan… Please support him by purchasing his products and those of other developers from a reputable store like Simmarket.

I made the BIG MISTAKE of purchasing your prouducts in the Marketplace… I wont be making that error again.

We need decent developers like Bijan… Please support him by purchasing his products and those of other developers from a reputable store like Simmarket.

Ha … I bought it first in the Market Place (MP) too. I thought I would try it out first and then buy the rest of it piece meal on the MP. Big mistake! I ended up buying all 4 seasons on Simmarket. Well worth the extra expense (for me anyway) and a much better overall product.

I also agree with you regarding your comments on Bijan and similar developers who offer a lot of help and support. I am very very happy to support these guys. On the flip side I tend to avoid buying from the other type of devs. even if they have a good product! Goodwill is hard to come by but rightly it should have its rewards

Hi Bijan,
I noticed these white trees in the far disctance too. They look like small white houses or reflections and are really annoying.
It seems to me that there is the lowest LOD level missing for some sort of tree, as the white spots are replaced by greenish trees when you come closer. Maybe that these are the hitherto unused tree species that you use since one of your last updates?

If it’s the same thing I am seeing; I asked Bijan that too and was told they are eucalyptus trees. I thought it was odd for the NE USA but I’m not the expert.

I have trees with white trunk but not white leaves. Can you email me screenshots with location and season used directly? bijanstudiola@gmail.com They look great and are totally appropriate for Australia, a lot better than the stock generic stuff. However it’s weird to see them in MA, NY, CT etc. Even though I am not sure what I am seeing are eucalyptus trees, but perhaps some object artifact.

Australia is not the only place for eucalyptus trees.
There are many in USA, mostly west, Europe, specially south, Africa and Asia.
I will reduce it or remove it from certain places.