AMD has just announced their GPUOpen solution equivalent to DLSS, it is called FidelityFX Super Resolution (FSR).
Their solution does not depend on proprietary code, is open-source and therefore should be easy to implement on MSFS by Asobo.
Their solution also works on AMD GPUs since RX 500 and even NVIDIA 1000 series and above.

So, it would be really cool if Asobo could implement that in MSFS in the future to make sure even more people can make use of better performance with their already purchased GPUs. (Or independent of GPU Vendor)
_
EDIT: March 17, 2022
AMD has just recently announced FSR 2.0. It seems a lot more logical to implement it now as it gives a surprisingly good visual quality as demonstrated by AMD’s demos (especially in comparison to FSR 1.0). Like FSR 1.0, FSR 2.0 will be Open-Source but unlike DLSS, FSR 2.0 will run on a greater variety of cards not requiring dedicated Machine Learning hardware.

I assume Asobo’s graphical engine already has a lot of code ready to implement this (TAA, built-in upscaler)
_
EDIT: April 29, 2022
Asobo has just confirmed in their last Q&A Session that FSR 2.0 will be added to the Sim. This is amazing! Thanks Asobo!!

Really hoping Asobo & Microsoft implements this.
It’s like DLSS but it works on Nvidia & AMD GPUs!

Here is to hoping

Looking closely at the official comparison video, FSR quality is not going to be anywhere close to DLSS, but if it’s better than the in-game TAAU and works on a much wider range of GPUs than just RTX, then it’s an improvement. And it’s probably just the first iteration, we all remember how bad DLSS 1.0 was and how much of an improvement 2.0 brought.

I urge anyone to fill out that quick survey, any GPU model will do!

MSFS is already listed as a supported title by AMD. My poor RX570 is now counting the days to June 22nd.

As ASOBO and MSFS is listed and, i guess, DX12 is necessary for this, i would assume that it is part of the Xbox/DX12 features that will come also to PC very soon. So, it seems they already have it implemented.

MSFS is already listed as a supported title by AMD. My poor RX570 is now counting the days to June 22nd.

As ASOBO and MSFS is listed and, i guess, DX12 is necessary for this, i would assume that it is part of the Xbox/DX12 features that will come also to PC very soon. So, it seems they already have it implemented.

It’s been listed in there since FidelityFX CAS was added with the 1.10.11.0 patch, so it’s not an indication that FSR will be supported.

I think that it will be a similar situation with DLSS, where they’ll want to wait until the engine team are done optimising for the Xbox before doing anything. Of course, requesting support from both Asobo and AMD can only help!

I think the reason we haven’t seen DLSS is because it would put the coming Xbox version at a severe disadvantage since DLSS is Nvidia specific. FSR seems like a great alternative that is cross compatible.

I vote for this!
It is an absolute must that should greatly improve VR performance.

Curious to see how good FidelityFX will be. Good to know that MSFS is a supported game! As long as the avionics stay readable, I don’t mind the slightly downgraded graphics in exchange for some higher framerates.
And great news that it’s both for Windows and NVidia. I’m sure the knowledgeable folk can do something great with the open source part of this. Maybe help push it to the levels of DLSS as it is nowadays.

I’m sure the knowledgeable folk can do something great with the open source part of this. Maybe help push it to the levels of DLSS as it is nowadays.

Indeed, it is important to note that AMD are calling this “FSR 1.0”.

I’ve mixed feelings about what they are showing in terms of “super res” technology, and if this is any indication that 85% of PC simmers won’t probably get any DLSS support because of the Xbox, then this is not a clear indication to me how the Xbox version is any good for the simmers.

I’ve just seen the following video (posted in a topic which was immediately unlisted): [AMD FidelityFX Super Resolution: Supercharged Performance] They are not showing anything better in their video than the CAS Shader already implemented in FS2020. It doesn’t look like super-res to me (aggregating multiple frames to create details): compare the character with the orange cape on both sides in the first shot below. compare the green plant to the left of the white bar on the fi…

Xbox SeriesX confirmed to have support for FSR 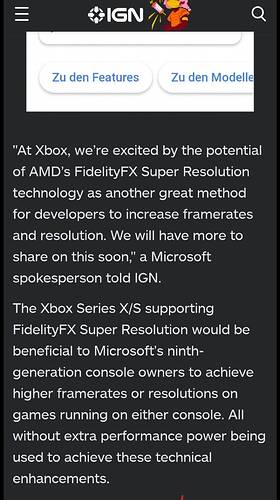 Here is a leaked list of upcoming games supporting FSR, as well as publishers/developers working with AMD to support FSR in the future.

AMD FidelityFX Super Resolution coming to 7 games at launch, 12 games coming soon Vegeta (@Broly_X1) revealed the first details on the upcoming FSR launch. As soon as we learned that there is already a list of FSR games, we have reached out to our...

Microsoft Flight Simulator is not on the list, and neither are Asobo or Microsoft/Xbox. Seems like we need to pressure them even more about this. 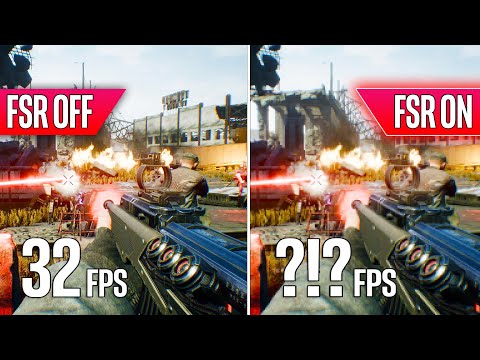 All looks good from these comparisons, hope the avionics stay readable when you would enable this.

Based on the previews we’ve got so far, it appears that Ultra Quality is great at 4K and 1440p (very close to native rendering), Quality is acceptable at 4K, while Balanced and Performance are not really worth using. At 1080p it’s best to stick with native.

It’s important to note that FSR does not have its own anti-aliasing solution like DLSS, it works along the game’s existing methods. It is simply a more advanced spatial upscaling method, and what it does exactly is shown in this slide:

As such, Asobo might be able to use it to complement their existing TAAU solution. It will be going open-source (via GPUOpen) in mid-July, which means there might be some room for improvement. Of course, we have to request for it!

Come on Asobo, having Nvidia as a partner showing RTX stickers everywhere in live streams but not adding DLSS at all?
Then give us FSR please! it benefits a broad range of users

@FinalLightNL I think that’s because the streams are sponsored by Nvidia, not the game itself, which is running FidelityFX already

The only real downside is using it with 1080p native, there’s not enough data to upscale it very well. On the other hand, if it still means a game becomes playable while looking better than regular resolution scaling I’d consider it acceptable. It might not be as good as DLSS in that regard, but it’s usable by almost 100% of the market (including Xbox) and not only the ~15% that owns an RTX card.

Combined with the (fingers crossed) CPU optimizations the next Sim Update might bring, there’s a lot of potential performance gains left for both the low and high end systems.
With the way the sim’s performance scales, I’d get double the framerate with FSR on 4K + Quality (1440p) - not even accounting for upcoming optimizations. I’m perfectly happy with it looking a bit softer than native with numbers like that

As a heads-up, a developer claimed that it took them about 2 hours to implement FSR in the game they were working for. A single developer, on their own.

Hopefully, unlike DLSS, Asobo will be more willing to adopt FSR. It’s basically a free improvement.