I mean wouldn’t they be given the task to do long flights so that they can at least try to reproduce this?? I imagine that’s how it works?? Lol

Yes i know what you mean, it’s bizarre. I have had this issue for a very long time and lot’s of people seem to experience it. Today i watched a Twitch stream with a guy who mentioned it on landing. Some other streams i have seen it happen too. They literally have a tool that shows them exactly what’s happening performance wise.

Is there a list of bugs that are meant to be fixed already, for Su8 ?

Like this FPS drop over time – isn’t that meant to have been fixed, ready for Su8

If so, then whats the point of any further discussion / complaints (unless of course, players still get this issue AFTER SU8 )

No they said they haven’t found the issue, still investigating. So if people have more info please report.

The problem is, what really can users report … some have it, some don;t think they do …

The clue maybe in – why can’t Asobo reproduce it ?

One assumes they have some machine set up to run the Release version, just like we have ?

The FPS meter only give a small amount of info.
Maybe what is needed is a better FPS / Performance profiler, that drills down into the system, and reports what part of the system is really slowing down - even if only in a beta version.

I am of the opinion that it is not clear wheter they can reproduce it or not. The way they worded it in the stream was a bit ambiguous imho. Also keep in mind that no one that spoke in the stream is a native english speaker.

They have a profiler in the engine so they can see everything in detail and which code takes so much time, but i don’t think this is possible in the compiled game.

They have a profiler in the engine so they can see everything in detail and which code takes so much time, but i don’t think this is possible in the compiled game.

Precisely – hence the suggestion that some more detailed profiling be incorporated into the Release version.

The release version is designed to stop outside “Snooping” ~!!!

Yes it would be nice to have some info so we can at least see which task is taking so much time.

But yeah it’s probably not happening.

I doubt this would be fixed for SU8, it’s only a month away so I’d imagine it’s pretty much done and in testing by now, if they just now started investigating and trying to repro this, it’s very unlikely that it would make SU8

It’s time this sim had some debug code which the user could enable and which would report back to Asobo on exactly which technical bits were likely to be the cause of issues like this.

But instead we have a few hundred/thousand people with a serious problem, and no real insight as to how it is coded or even any technical knowledge, trying to report symptoms, rather than causes, and just having to hope someone as Asobo manages to understand where things are going wrong.

I’ll add one finding into the equation.

What I tried is Reducing the RAM ( by making a Ram Disk of varying sizes, that I do not try to use)

Note: In all cases, the FPS counter in MSFS reported 32GB of CPU ram.

I have 64GB of ram and I do have degradation after 30minutes of flight, for me it has nothing to do with ram.

it’s only a month away

This would make sense if the issue was introduced around 2 weeks ago. But, this problem has been present for months, almost a full year. How many sim updates have there been between April 2021 and today? At some point, you’d expect them to finally fix it. But nothing much has been done by Asobo, sadly. How many more sim updates to address the issue? Sim update 16?

Personally, I have understood from Q&A (also not native English speaker) they have reproduced issue, but not always.

I would also not stick only to Q&A answers as they can be misleading. In past, they have denied multiple issues which were later fixed (Thunder Planet, FPS hit at previous Christmas, LoD issues (which were not fixed completely but nevermind)).

And just to add, if anybody still haven’t submitted issue to ZenDesk, let’s do it: https://flightsimulator.zendesk.com/hc/en-us/requests/new

If I had money I would bet a million dollars that this won’t be fixed in SU8, hell even SU9.

I am going to try a fresh reinstall of FS2020. I’ll let you know if that solves the issue.

Just an update to say this decreasing fps problem isn’t fixed in WU8. What I do notice is something with my CPU cores. At the start of this 3 hour flight all 12 cores had nicely balanced workload.

However, now the fps is dropping off, the last core is almost at 100% cpu utilisation, and the other cores have dropped off in utilisation. I thought this historic (FSX) busy last core problem was supposed to have been coded out of the sim last year in one of the SU releases (5?), but it still seems to be appearing in long flights.

Interestingly, this particular flight is currenlty way over the ocean at night, so you would think there was less work for the sim to do with no landscapes to draw… 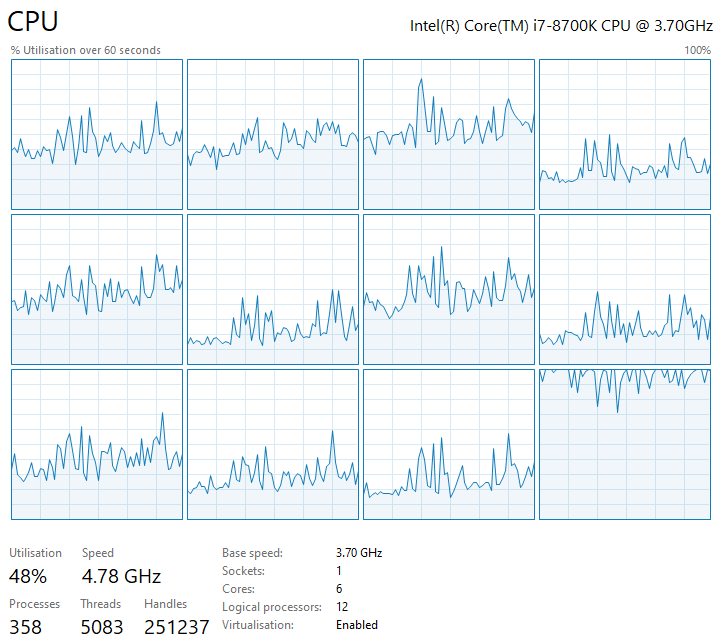 The main thread is running on that core, so the workload on that thread increases with time. For some reason. Probably a task is never killed but new ones keep on loading in.

It doesn’t seem to matter if you’re over the ocean or over cities.