Strangely, the fps on this flight went back to 30fps for a while after this, and then dropped right back again later in the flight.

I wish they could get this sorted. Complete immersion killer, and a regular occurance as I fly mostly longer flights.

That’s strange. Did you limit to 30fps? And what did the fps meter say limited by main thread or GPU when you got back to 30fps?

I am now in a session which has been running for 14.5 hours. In that session I have already completed 3 flights and I’m not on a fourth. London to Dundee. Dundee to Iceland and back (one flight chasing an amazing jetstream). Dundee to Inssbruck. And now I’m in the middle of Innsbruck to Crete.

At times during all of these flights I have had solid Vsync 30fps, and at other times, it been 5-14fps and not at all smooth.

And I’m really getting fed up with it after all these months.

Here it is currently at 13fps 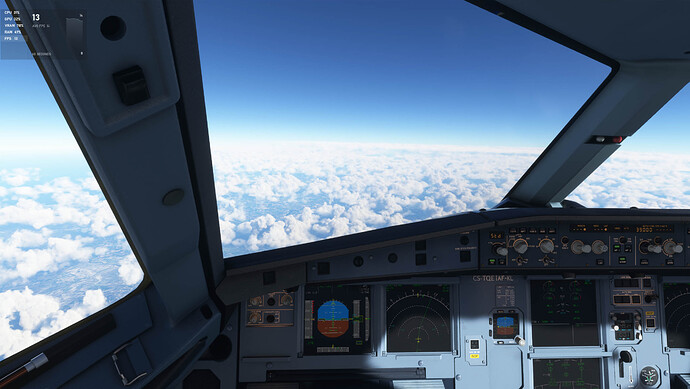 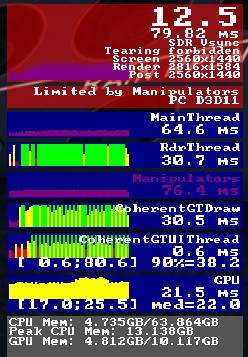 So what does ‘Limited by manipulators mean’, and why isn’t it limited by them all the time?

And seconds later it’s down to 7fps… 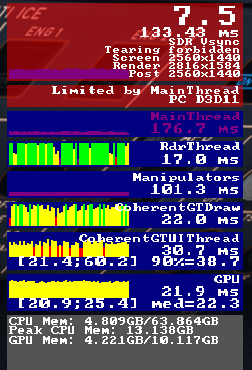 Now limited by Main Thread, which is obvious from the TaskMan where the last cpu core is too busy. But none of this was a problem after SU5(?) when they moved a lot of the graphics scheduling away from that core, and this same hardware was then running the sim at 50+fps.

This flight was at a smoooooth reliable Vsync’d 30fps when I departed. 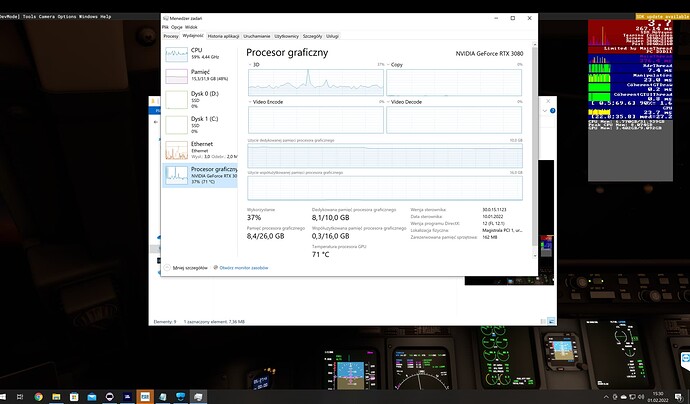 Yeah! Happy to fly with Microsoft!
After 2h fps drop to about 5. Yeah!

I really dont understand - can anyone explain this?

I left only crj in community folder. Everything else move out folder. And im during long flight and after 3h everything is cool - fps doesnt drop.

Maybe some content drops fps down?
In next step im going to put to community folder some content, but not as much as earlier. Only departure and ariival airports.
I will report the results.

I assume you only changed available RAM and nothing else. It might be interesting but very time consuming is to try each RAM size with each general graphics settings of low, medium, high, and ultra.

Asobo must have had good reasons to create four separate, distinct graphics profiles. If they wanted everyone to use ultra, MSFS would only have the ultra setting. If they wanted to have one universal setting that would run on all modern hardware, there would only be a low setting. But MSFS has the four different settings. They must know that only certain hardware will perform well using ultra while other hardware would have terrible, unusable performance.

I still believe that most of these CTD could be avoided with better exception handling.

Also, the drop in FPS, while the Coherent thread takes longer & longer to complete should not be that difficult to debug, and the cause determined and eliminated.

If MSFS can run Initially at a given Frame rate, it should be able to tale care of itself, and maintain that rate, or close to it under varying conditions, of which TIME should not be one that cause a slow down.

I’ve noticed in the couple of videos from sufferers that I’ve seen not just their vram use changes (normal) but also the vram size which actually baffles me as I haven’t ever seen it happen on my system… Maybe some kind of so called optimiser is being used or a 3rd party mod isn’t all it says it is. Riva tuner is another suspect.

25 Likes
Poor performance on the ground
New PC Component. What would it be?
Xbox/PC screens go black then CTD
Sim Performance Terrible when Limited by Coherent GTDraw
CptEvillian February 1, 2022, 10:12pm #1591

Hopefully this is one and the same issue.

Thanks for reaching out to them let’s hope they can fix it.

Here’s for hoping, this was reported fixed a long time ago

But then again, is it a memory leak? My memory usage never really goes really high, looks like old tasks pilling up on the mainthread and not getting killed when they should

Exactly – a lot of my “run sim for long time” eventual CTD seem to be caused by something like this. 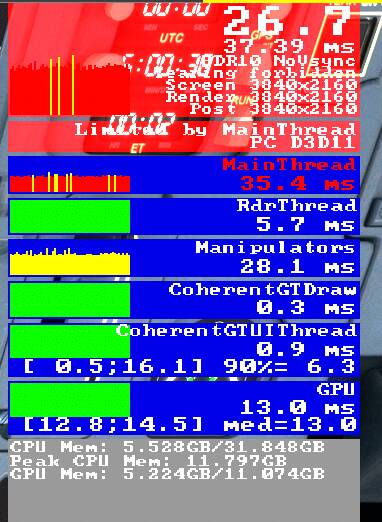