I saw a video about the Aviatek G1000 and it looked pretty good. If anyone owns it, I’m wondering how they feel about it. Are you happy with your purchase?

I ordered one yesterday, I also saw that video when searching for alternatives for the one that was in my list (realsimgear) but when I decided to buy from Aerosoft (Europe), a few days a go, it was sold out and with this new semi conductor crisis I started looking for alternatives. I called the Aviatek and was very happy with their customer support . So in 5 or 6 weeks time I’m supposed to receive mine. I will give you so feedback in case you don’t have already one.

and is compatible with msfs? I see there XP11 what can I understand it has implemented connection via XP11 driver. Then also question comes that XP11 G1000 is different to MSFS, also with complexity of existing features.

It’s compatible you just need a plug in that you download and everything is easy, I spoke with the owner and he told me that if I have any issue installing it he would help me. I have the Virpil rudder pedals and had to do exactly the same and they work fine.

Hello, they did that last year, the pic is from their Facebook

for this info I asked so they prepared different platforms probably and use maybe some user selected driver due sim used. Ok, thnx for infos. Sry (don’t want bother with web) what price of both devices?

Thanks! I ordered mine in March but haven’t received it yet. They also fell victim to the semiconductor crisis and had to revamp their system to use a different chip.
Just a heads up that it does not use HDMI, as stated in the video. It uses DVI. Fortunately, the three power adapters mentioned in the video have been brought down to one since John’s video aired.

Hello, I only bought one device, reference ending in B and I’m going to use it as PFD (but it’s the MFD one with the AP buttons), they have a sale right now on their website less 500 hundred euros but with the VAT (and DHL) the total um paying is 1966€.

Well, a long wait for you

Let’s hope the semiconductors arrive soon, they were positive and 5/6 weeks is the time I’m supposed to wait since my order, but for someone who waited around 7 months for the Honeycomb Bravo, around 2 months is fine. I don’t need the DVI I still have got one spare HDMI and a couple of DisplaysPorts but hope if it doesn’t you have the adapters to fix the problem​:slightly_smiling_face:

Thanks! Actually, I ordered it in March, but my intention to buy it went back a few months before that. They told me that they were switching from three power blocks to one with a daisy-chain system, so I waited for that to be complete before ordering. Nevertheless, the wait was still not as long as for your Honeycomb, though!

I’m a little confused by this sentence, though:

I’m fine for myself. I have an HDMI-to-DVI adapter. Since the signal is the same (it’s only the form factor that’s different), it’s a very skinny adapter. But I’m confused about what you said for yourself because you said, “I don’t need the DVI”. The input port on the back is going to be a DVI port, so I’m not sure what you meant about not needing it.

Just a heads up that it does not use HDMI, as stated in the video. It uses DVI.

Hello, when I read your sentence “
Just a heads up that it does not use HDMI, as stated in the video. It uses DVI.” I perceived who wanted the DVI, and what I meant to say was I don’t need the DVI as I don’t have that port on my PC, but I assumed you need it and were afraid that they could replace it. 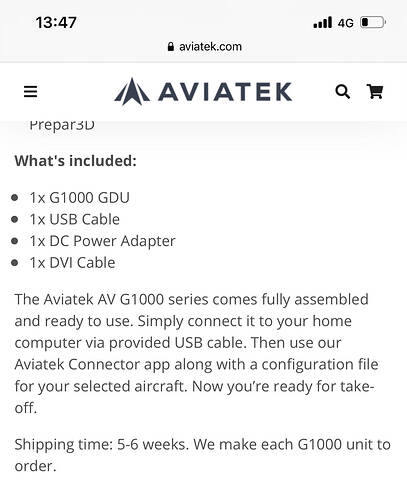 You are right!! When it arrives I will have to see if it’s me who needs to use the adapters (I have got I few already)

Ahh, yes, I see what you’re saying. I have HDMI ports like you, so it’ll be adapter time for both of us!

Hi there, have you received your G1000 from Aviatek by now? I’m hoping that your answer is affirmative

I’m already on the 10th week​:frowning:, by now I already purchased a GCU from realsimgear, just to be able to control the Avionics without having to deal with the nightmare mouse when flying in strong winds…

Heh, the nightmare mouse issue inspired me to create a Wishlist topic for it.
I actually have not received it yet because I am still waiting on the version with daisy-chained power, which suffered some delays. I’m sure I would’ve received mine by now if I hadn’t asked them to hold off on the order!
Fingers crossed for you!

Just voted🙂 I see, bad luck indeed☹️ I’m going to send them an email to ask for developments , if I didn’t have a space problem I would buy the realsimgear G1000 that is available again and use it as a MFP but two of those big screens is too much!!!

Actually, you can buy a single RealSimGear PFD/MFD if you wanted to: Yes, and they are available at Aerosoft now, but I already ordered and paid (debit on my credit card was done when I made the order) the one from Aviatek, so two would be too much on my set up (I don’t like to have them mounted on the honeycomb- too high-> less screen and I like sightseeing

(I’m not a pilot or I wasn’t a simmer before the pandemic, I was a traveller​:blush:).

Hello, great news for me, just received an email from Aviatek saying it will be collected by UPS today🙂 so probably Monday I will be receiving the G1000. Have you been in touch with them concerning your order? Anyway, hope yours arrive soon as well🙂

Awesome! I have not heard from them, but I will wait a few days before pestering them, as I have pestered them a lot!