Blackshark.ai - Too many trees, in too many wrong places

They give the impression that it’s a lot more advanced than just color matching.

Of course it’s a lot more advanced than that. But that being said it’s still far from perfect. It’s good enough, I give them that. But it’s not perfect as some buildings are inaccurate. Due to the (understandable) limitations that it has.

I’m not expecting anything much, to be honest and frankly, what they’ve given us is more than what I expected. I work in the IT industry so I’m pretty much aware of the complexity of building an AI like this and actually improving them to be better at what they’re designed to do.

It’s just amusing that there are a couple of quirks here and there that I find it really funny to see. Such as the national monument in Jakarta, Indonesia is completely missing as if Gru and his minions just stole an entire huge complex of monument, leaving a square shaped flat park. I’m not complaining of course. I do understand the limitations that it has. It’s just amusing and funny, that’s all.

yes, we are all just Joking around … its really amazing … but the joking does help a little with the other frustrations of the current state of the sim, and its significant issues .

A tree, a tree, my simulator for a tree eh!

If we’re going to get Shakespearan (Richard III)… 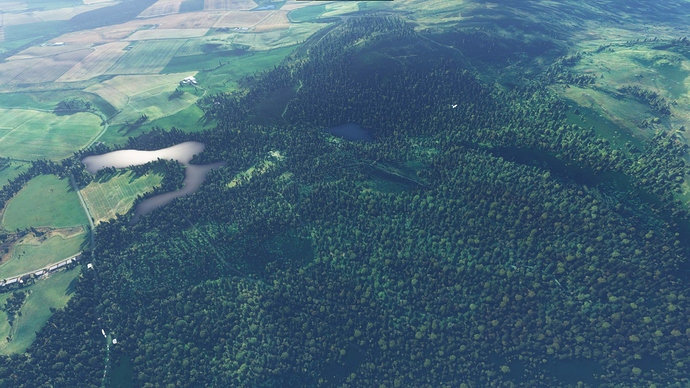 I’m not sure why folks are saying “bring back wonderful tree LOD…” As far as I can tell, trees are still running wild vs. The superb tree density/LOD in the early days was possibly one of the greatest things about this sim. Vote Here to bring it back

You cab go into the MSFS vegetation config file, and lower the density & sizes of tree types.

Do search for exact details … I think I saw it on one of the FS forums, Avsim ?

Haha. I do hope this tree thing isn’t going to haunt me.

Just make a BACKUP 1st … you don’t want to have download the whole Sim again !!!

You cab go into the MSFS vegetation config file, and lower the density & sizes of tree types

That’s true but if the revival of MSFS was originally conceived as a hyperrealistic virtual tour of the world with Hololens or whatever, why should the everyday user have to dive down into the guts of the sim to tune up or tune down the level of trees and other detail in any area of the world. There are probably more important things to improve in MSFS first but eventually I hope Asobo & Co. can make everything look as close to reality out of the box as possible. It’s not good to promise the world in unparalleled detail and then have the user find out that the world is a bit screwed up in multitudinous ways and have to fix it himself or herself. Overall I think MSFS 2020 is great - super happy with it, allowing for future improvements and fixes - but I want the real developers to be the ones to take care of business.

Agreed – but some get a kick out of diving in and tweaking things themselves.

Good for them – If that’s what they enjoy doing, its time better spent than messing with Tic-Toc !!

Yes. And that is a very important point you make.
I certainly do not want to go back to the bad old days of having to spend hours making pesky ‘tweak’s’ just to make P3d flyable.

For the same reason I think there is a case for making all scenery mods integral to the update process or we will all end up dancing the ORBX shuffle all over again.

Take a look at Atlanta area outside the city parameter. The king of trees!

I’m not sure why folks are saying “bring back wonderful tree LOD…” As far as I can tell, trees are still running wild vs

For a more detailed breakdown of the trees rendering bug:

This is my second post about the LOD questions: Facts and illustrated comparison between previous versions and v1.9.3 Hi, This is a follow up to: LOD problems - Trees, water. @SlidHydra647449 attracted my attention to Trees specifically and I’ve been doing some experiments I’d like to share. As reminder, Trees fixes are about reducing the size of trees in the simulator because they generally look taller than reality. I’ve adapted his fix into a set of different community folder fixes so tha…

NB: I’ve posted 3 articles in the discussion, each one completing the other. Make sure to read them all.

PS: LOD problem is not about density, it is about draw distance mostly.

PS: LOD problem is not about density, it is about draw distance mostly

The post that I was referencing and others that I’ve seen in the past specifically mentioned “density,” as in The superb tree density/LOD in the early days was possibly one of the greatest things about this sim. Vote Here to bring it back This thread is also entitled “Too many trees, in too many wrong places” as well. So whatever underlying parameter is the actual cause, a commonly recurring symptom is too many trees (often too big trees, too) in too many wrong places as soon as one gets close. I think a lot of the commentary is not much help because it references BEFORE and AFTER views within the sim, not real life.

The most useful commentary would compare views in the sim to what actually exists in real life. In my experience, Google Maps 3D is usually much closer to reality than any MSFS sim 3D and Google Maps and Google Earth have user-posted pictures available and also Street View for Google Maps that’s actual camera ground-level footage of real life.

As I mentioned above, Asobo/Blackshark.ai need to improve their tree-generation algorithm and maybe the quality of input data and context fed the algorithm. We shouldn’t have to fiddle with it to get an out-of-box average user experience hopefully at least as good as Google Maps 3D someday.

Asobo/Blackshark.ai need to improve their tree-generation algorithm and maybe the quality of input data and context fed the algorithm.

I agree in the long run this will certainly be something they shall consider. My remark is for the short ter and is about how density is directly affected by distance because of a bug I’ve documented and Zendesk. For this reason I believe the most pressing issue is displaying trees sufficiently far away and solving the bug, so that once this is fixed, they could properly address density.

Military ships MAY have been removed Intentionally, for some strange Political or International diplomacy reason – or whatever is Politically correct these days.

The USS Midway museum ship is present in the San Diego scenery, including all of the static aircraft displays parked on the deck. The Harbor Drive Naval Station is fully populated with ships - probably 20 in all - though almost all have trees growing on them -

I thought I read somewhere that there was an intention in MSFS not to depict Military objects.
Maybe this objects got missed by the AI, especially a they have Trees growing on them !!

MY local airport KMTN, has a National Guard facility on the airport, with building, hangers etc.
The Sim hanger even has “Maryland National Guard” on it, I assume somehow captured by the AI, but the A10’s that are typically parked there, are not shown, either as 3D or 2D,

I agree with OPS. Southeast Asia is the worse. City, town have abundant jungle trees and not in the correct geographically setting. There’s a huge hump like mountain or ground depression in the middle of the city like Kuala Lumpur.

‘IF Green=True THEN Generate Trees’

In some forums, there are facepalm emotes for stuff like this.

Fortunately, it’s not quite that simplified as there are literally millions of square miles of green areas in the sim that don’t have any trees at all.

I was going to post this in the Q&A … MSFS in a few years, after all the gamers move on to the next BIG game, and the cash inflow stops … but decided it was better to post it here, where it might get appreciated more.