I don’t use add-ons.

As you can see on the screenshot below, the airliners, as soon as they would reach the STAR / beginning of the approach phase, lose the remainder of the flight plan and turn directly towards the destination runway. In case of the A320neo the waypoints stay there but the flight path disappears completely. In case of the Boeings, the whole flight plan gets deleted with all remaining waypoints and IFR navigation becomes impossible. This always happens when the next waypoint switches to the STAR.

On my screenshot, the next waypoint should be KOVAN, however the autopilot skipped the whole approach phase and designated RW25 as the next waypoint. This arrival was at EDDS (Suttgart) Airport, but it happens at many, if not most airports.

As far as I experience, this only applies to the airliners. Aircraft with Garmin navigation systems are unaffected. 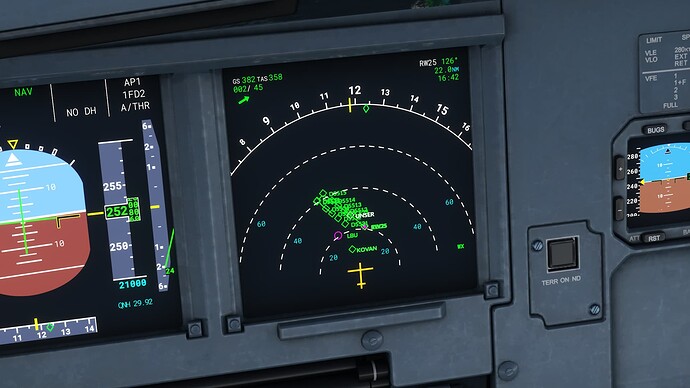 Thank you using the Bug section, using templates provided will greatly help the team reproducing the issue and ease the process of fixing it.
the update 1.27.21.0 release sep22/2022 it is a disaster, lot of issues. B787 in ifr before go correctly, now with this updated autopilot can’t ffollow the flight plan in star patern to approach. lot issues with my thrustmaster throttle quadrant. I flight b787 with lufthansa and mt log wrote mexicana???
Are you using Developer Mode or made changes in it?

no
Have you disabled/removed all your mods and addons?

no they work good before

the update 1.27.21.0 release sep22/2022 it is a disaster, lot of issues. B787 in ifr before go correctly, now with this updated autopilot can’t ffollow the flight plan in star patern to approach. lot issues with my thrustmaster throttle quadrant. I flight b787 with lufthansa and mt log wrote mexicana???

It is absolutely back in full swing with this final SU10 build. I experienced the exact same issue as the topic author.

This must be fixed asap, because it’s such an elementary thing of a flight simulator. When it’s not working, it ruins the whole experience!!

I suffer from this issue as well. Impossible to perform an ILS flight in the A320. Of all the bugs, I find this even more frustrating than CTDs.

Obviously, it’s not happening to everyone, or there would be a huge stink over it. My concern is why is it only happening to a relative few of us and what do we have in common?

Ironically, the past 3 or 4 flights I did with the stock A320 and the 3rd party LVFR A319 didn’t suffer from this bug… I really have no clue what has changed…

For my mental health, I just need to walk away from the airliners for the time being. GA, here I come! Had the HJet out for a spin last night and it’s a terrific little jet. Best DLC jet for Xbox at present IMHO. Not an airliner, but it will do for now. The only problem with it is it doesn’t really shine until you’re up at FL 400! You can skip along at a decent speed then!!!

As far as details and being able to access charts, etc. nothing else on Xbox comes close to it.

It looks to me that you have a disconnect in the flightplan. That needs to be removed before the aircraft gets there preferably before takeoff

Plausible, yes…but the flightplan is entirely crafted within the world map and is perfectly fine. Here’s the kicker…run the exact same flightplan in the HJet and there are no issues.

That may be, but have you looked through all the legs in the FMC? I think you might find the disco there that I can see in the screenshot above.

Interesting. This is a copy of one of my posts that is elsewhere on the same topic…

Okay…did a little testing of my own: CYQX to CYYT. Set up a flight to land on RWY29 via AVALN29 STAR.
A320…STAR dropped. Plane headed direct to airport and circled indefinitely. Same for the new A319.

Just for fun, went back to the A320…same results as before…STAR dropped again.

Now what do you make of this? Seems the issues are with the default A320 and derivatives thereof?

Are only a few of us having this issue on Xbox? Seems like it. Just wondering what we all have in common that the others don’t.

I had someone else fly the same route and they had the same issues I did. Perhaps if you have time, would you mind checking it out for me? It’s only a short route and is my go to “test flight”

OK. Update…
Entered my test flight entirely within the aircraft via the MCDU without using the world flight planner. Results…successful!

The msfs flight planner is obviously delivering bad data to the A320 (Garmin equipment is fine). The question is why are only a few of us (relatively speaking) plagued by this?

The question is why are only a few of us (relatively speaking) plagued by this?

Haven’t we both demonstrated that it is completely reproducible given a certain set of criterion?

Isn’t the transition from a STAR to an ILS approach the issue or is it not exclusive to ILS?

My KSBP to KSJC route worked when the approach was RNAV, but didn’t when ILS.

I think I hadn’t seen it, because the automatic route planning rarely assigned me a STAR, so I was probably avoiding it nearly always.

I fly mainly GA, so my probability for seeing the issue was lower by default, too.

I never use automatic flight planning, nor do I use ATC. ( ATC drives me out of my mind to be honest)

I’ll print off a plan in Simbrief and then use that to program the flight in the planner.

I’m thinking it’s time to put on my big boy pants and start programming within the aircraft the way God intended it!

Everyone is affected by this, only not enough people pay attention or come here to indicate this bug.

Here I am guys! I also post the problem in this post. Like the user above, I am also thinking about temporarily parking airliners because it is impossible to conduct a full flight without the flight plan loss bug! On the contrary, the A319 I bought is even worse than the standard A320. I also own a Hondajet and it is a good replacement for an airliner so I will go with that at the moment. The only thing I regret is that it does not have the autothruttle and therefore you have to be more careful to regulate the speed in each phase of the flight. But it’s a great plane.

Flying Asobo A320 you’ll face this problem on very few airports. and it’s a repeatable issue.On the majority of them there are no problems at all.At least this is my experience.Try others landings and see.

I’ve pretty much given up on airliners since SU9 when I noticed this bug. The HJet has been getting a lot more use these days for sure.

yesterday i flew with m20 ovation and the bug appeared. It started to turn and lost the gps. I had to deactivate the autopilot, put heading, get back on course and reactivate everything. so it becomes frustrating, also because during the cruise phase it happens to get away for a few minutes from the PC or TV, I think we all do it a bit.