I will try it. But I am not even moving, just pan left/right and you see a stutter. If it were a streaming problem it should appear once, when you download the content, terrain, autogen and all those toys. Once is downloaded you can easily access it from the vram, no need to stream it again. I have 11Gb of Vram that is hardly using 4GB with all ultra.

Not really true because there’s also instructions coming from the cpu that have to sync with the data.

I trust that you know what is happening but my point is… caching a scenery is not rocket science, specially if you are stationary, any game that uses a scenery does this well.

How many games stream scenery from the net? … endlessly! warts and all? - there is nothing remotely like MSFS anywhere.

no point in arguing, as I said, if you are parked at an airport and just pan around there is no much to stream again. Just open Fiddler and you will see that is not constantly streaming the scenery if you are stationary. But hey, I will try your suggestion.

Lol, this thread is literally 4 people having a chat in public. How is everyone doing today?

I just meant that it wasn’t “painted” white, which is nice. I’ve seen it where it looks like the runway has white paint all over it when it was snowing out which is pretty weird.

I am on XBox X with wireless mouse and thrustmaster hotas one and I have not had a CTD or screen “lock up” since this beta test. I flew 2-3 hours Friday night, 5-6 hours Saturday and about 4 hours today. Previously, I would have had some problems during one or more of those flying sessions. We’ll see…

I realy hope they manage to get the METAR transitions good.

I am not sure I like this new METAR integration (at least not when it comes to clouds), no matter how smooth the transitions are.

Transitions are vastly better from SU7. Not perfect, but the SU7 transitions were potentially game breaking. These are more than usable and actually work quite well from what I’ve seen so far.

KONT is reporting 6sm with haze in the LA Basin just northwest of there toward KVCV it’s greater than 10sm in the Mojave Desert. 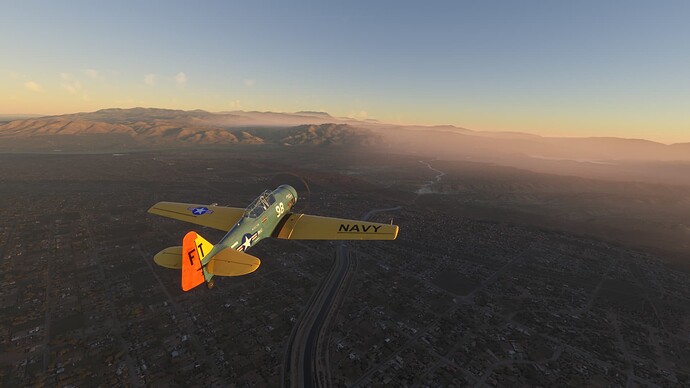 You can now see the haze that you’re flying toward, it doesn’t just suddenly appear around the plane like it did in SU7.

In METAR dense regions there’s some pop-in with the weather in the distance if you’re slewing or flying super fast over a METAR dense region. It kind of looks like how the scenery loads in when you slew or fly fast. Otherwise, it’s not noticeable at all at regular cruise over most areas from the test flights I did. (knock on wood) 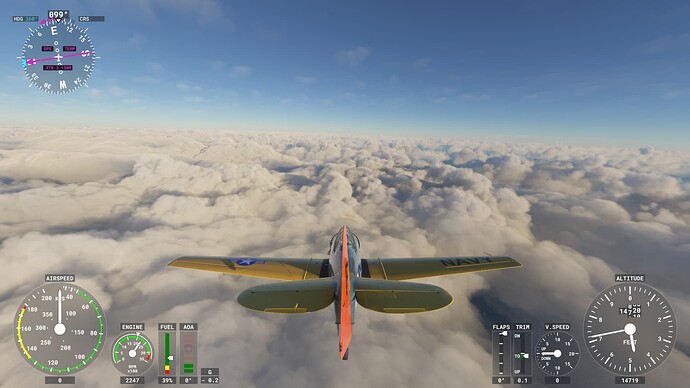 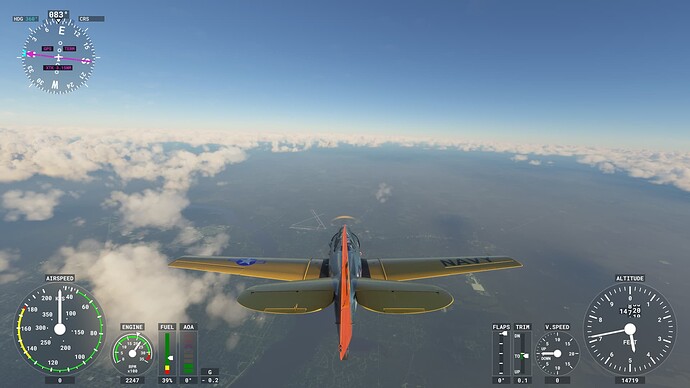 KSPI is reporting overcast at 6500 and KDEC, 45nm away, is clear. The transition was smooth between the two, as the the clouds gradually thinned out across the entire distance. Slewing between the two introduced an artifact where it appeared the clouds were continuously morphing. Not noticeable at normal speeds, and again not unlike the scenery loading in, but a distinct quirk that probably exposes how the METAR transitioning is done.

The only other thing I’d nitpick is that the clouds were actually broken in the sim, not overcast, and large cumulus types. I don’t think the sim really has distinct clouds types down though and it’s probably a limitation of that.

If clouds will appear like the ones we have now then I really hope Asobo will give us the option to use the previous version of weather. In my opinion it’s a huge downgrade in visual just to have the most accurate weather at departure and landing, really? For just two minutes of game? It doesn’t make sense, please revert or add options!!!

agree 100%. And we never needed to use the unrealistic word ”transition” before the implementation of METAR based weather. Weather does not transition into something else. It’s the weather and it flows naturally. Now that word is used everywhere about the weather. It will not be accurate with METAR everywhere now either and it also now has tansitions and bad generic clouds. I want options too!

Thank you for the information. I rather have the old weather sytem back or with options to turn METAR off. It doesn’t sound like blended to me if we need to use the word transition. I never needed to use that word in this sim before su7.

I’m afraid that there will always be a subset of players not satisfied with certain qualities and functions of the sim.
I don’t think Asobo is able to code the sim for players to be able to choose if they want a Meteoblue only or Meteoblue/METAR weather combo. That seems like a very hard, if not impossible task.
One group of players want to have the weather to be as most realistic as possible - by that I mean to match with weather IRL.
Others want a Meteoblue approach only.

There are several limitations to Meteoblue approach only:

There are things you can’t predict, or your prediction will have a ridiculously low probability of succeeding.

You are too hung up on that transition word

Still getting some crazy wind transitions at cruise. Doing a flight from KSDF-KDEN now and I’ve hit two so far. About 75% done with the trip.

I still don’t think it’s realistic that the weather changes suddenly to be some other type of weather. I understand that many wanted to have METAR in the sim but we didn’t have that from release. Those who wanted this are real happy now. We that don’t like it have no options to go back.

Let’s give them a chance to do it right. The upcoming patch is a good indication they care. It might even take a few years, but we could end up with the best weather engines across all sims, I think it’s certainly getting there.
I know Jorg was talking about using certain remote sensing tech to simulate storms. Who knows what else they have prepared for us.

Hence the word ‘transition’.
You like ‘blend’.
I fail to see the difference…

The wish was voted for a lot. Hence the change.
You could put up a vote for a toggle if you want? Then we will get a sense of who are the ‘we’ that don’t like it. To my view a lot of people wanted this and like to see some improvements. This patch is a first big step forward in that respect.