Our next couple Developer Streams are scheduled and we are excited to meet with you once again! If you have noticed, the past few streams have changed title slightly from “Dev Q&As” to “Developer Streams” as they usually contain more than just Q&A segments. We love celebrating releases, announcing future plans, and bringing on guests to discuss their development work with us. Of course, we also love answering your questions directly if we are able!

The next Developer Stream is scheduled for 2023-02-01T18:30:00Z on Twitch. This stream will focus on World Updates, upcoming planes, a very special guest, and the discussion of specific feedback items from you.

As a heads up, our next stream after that will be in early March, and will cover ALL things Sim Update 12. So while we know you may have several Sim Update 12 questions to ask, please hold those questions for the next round.

There are specific areas of the sim that we would love to gather your feedback and questions on:

We understand that you may have questions outside of these specific topics, but please save those for a future stream. There is a lot to talk about this year, and we’d like to cover it all throughout future dev streams.

This thread is not for discussion replies - please respond with your specific questions. Any other replies will be removed.

A lot of airports around the world are missing taxiway signs, and in other cases, the taxiways that are there are labeled incorrectly. That makes it difficult to accept taxi instructions from ATC and even more difficult when using a network like VATSIM. Is there something blocking this from being fixed?

start with major class B airports – there aren’t all that many. expand from there as you wish, class C, class D if possible. at least towered airports. editing default airports/paying 3rd parties to add correct taxiway designations / signs at major airports isn’t something the users should have to deal with in the year 2020. fsx was able to do it, p3d too. at least for the time they were reasonably accurate. the holy grail would be to keep them up with the official chart cycle. MODERATOR EDI…

Airport charts will tell you if runways have 2-light or 4-light PAPIs and whether they are on the right or left side and what kind of approach lighting they have. This is often wrong in the sim. Where does MSFS get this data from, and is anything being done to correct this globally?

(Note: Normally I would give a list of airports where I see this problem. Unfortunately, I am traveling and will not be able to to provide a list until after the dev stream. If requested, I would be happy to. But to be clear, my question is not about fixing individual airports but how to fix this problem holistically.)

I often see airports where there is a segmented circle baked into the ground texture, and a windsock placed 50 or 100 m away.
A human doing the airport manually would know that the windsock would go inside the circle, but there doesn’t seem to be any intelligence built into this when it comes to the AI placement of windsocks.
Is there any chance that the AI system might one day get trained to recognize these ground cues and get a little smarter about windsock placement?

In the US and I believe in Europe (unfortunately, I am not qualified to speak for the rest of the world) VFR charts have reporting points. These are prominent landmarks that ATC is required to know, so you could report your position with respect to the landmark.

Has any thought been put into a specific focus on these points of interest so that they could be used as reporting points some day when ATC gets a little more sophisticated?

In a previous developer stream, the team addressed a bug report about airports being too dark. It was stated that it would be difficult to create an algorithm to accurately place floodlights at default airports. Have we made any progress with this?

What is planned to ensure ai traffic integrity and guidance will work on custom made airports, especially with the new “scenery gateway” being in place soon?

Right now we already see airports within the sim on which aircraft pile up on the runway (KATL) because of some broken nodes. With more airports coming in to the sim I can imagine that this will get worse if there are no proper checks in place. The same goes to overlapping gates which avoid them to get properly populated by traffic aircraft as one gate is blocked whenever the one overlapping is populated.

Will there be more (maybe automatically generated) helipads coming?

Currently there is just a hand full of helipads on certain places. It would be nice to see even more in the sim around the globe. They don’t need to be pretty detailed like a heliport imho but there should be some variety

also it would be nice to see helipads with their correct icao codes - this could also enable usage for traffic.

Has the airports team thought about adding wig-wag lights to taxiway intersections? These are lights that flash back and forth where taxiways meet runways in order to remind you to think twice before crossing them. They are a safety feature and they also add to the “life” of the airport.

A GIF I found on the Internet that illustrates what they look like:

There is a Wishlist topic for this:

I would really like to see animated runway guard lights. Thank you

Most (or maybe all?) handcrafted points of interest appear to be stored on your local machine. I’m wondering why they can’t be streamed like other data.

(Asking as someone whose hard drive has completely filled since August 2020!)

Will there be dynamically placed/moving starting points in future?

Thinking about both airports and heliports make me asking for the possibility of starting points on ships. Traffic like aircraft carriers can offer basically parking spots, launch spots and a “runway” for landings and helicopter takeoffs. Ships may have helipads to land on or to takeoff from.

Some posts deleted. Please stay within the scope of this developer stream.

There are specific areas of the sim that we would love to gather your feedback and questions on:

This thread is not for discussion replies - please respond with your specific questions. Any other replies will be removed.

There are two 100+ vote missing airport reports: MPTO Tocumen and LTFM Istanbul. When can we expect these airports to be in the sim?

I was wondering if there’s been any update for this topic ? It’s gonna be almost one year that the games was released.

PTY/MPTO is an enormous omission from the sim, ranked on 2019 #9 on the busiest airports in the sub-continent. UPDATE: Today I was doing VFR around Bahia de Panamá and noticed in the distance the Tocumen runway as lighted… I tuned ILS 03 R and to my surprise I got a live localizer, here is me landing on the otherwise bare runway: [Microsoft Flight Simulator 2020 - MPTO ILS Runway 03R] I also noticed that I can plan from/to the airport… may be due to the updated Navigraph package? I…

In a previous Dev Q&A, Jörg stated that it was surprising that Stuttgart airport was [then] missing from the sim, considering its size. Istanbul is one of the largest airports in the world, with about 18 times more annual passenger volume than Stuttgart.

MPTO Tocumen is, by far, the largest airport in Central America. It was missed at launch because Bing aerial imagery had the airport covered in clouds. Bing later got better aerial coverage, and now the “airport” that exists in MSFS is a runway and two buildings, with no runway lights, approach lighting, gates, parking, or a ramp.

Will more handcrafted airports be added over time to regions of the world for which “World Updates” have already occurred? There are many Class Bravo and Charlie commercial airports around the US alone for which there is no good quality representation in the sim from third-party developers or Asobo.

Any thoughts about themed global points of interest such as UNESCO World Heritage sites or wonders of the world?

Has the team figured out a way to ensure that scenery tears don’t happen at airports (specifically on runways and taxiways)?

People in the forums use the word “tear” to describe rips in the scenery where gaps exist. (I don’t know what causes these, but I would love to hear the team’s explanation as to why they’re there.) When you hit one when landing, it is not uncommon for you to flip over and crash. 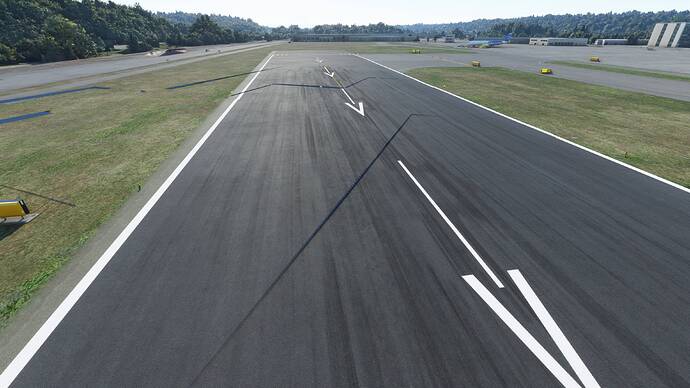 One example of this is at ESSA:

Please only post bugs that are new in this build, and tag your post with #pc and/or #xbox. Are you on Xbox, Steam or Microsoft Store version? Steam Are you using Developer Mode or made changes in it? No Brief description of the issue: Runnway 26 is broken at ESSA Provide Screenshot(s)/video(s) of the issue encountered: Detailed steps to reproduce the issue encountered: PC specs and/or peripheral set up if relevant:

Note: My question isn’t about the specific tear at ESSA, but about tears in general.

More examples are available in this bug report:

This bug report is to address the runway tearing issue, and is intended to consolidate what was originally thought to be several separate issues into the single overarching issue that it is. The primary issue here is that when landing a faster and/or more complex plane on a runway that is situated in a photogrammetry area, cracks (uneven terrain tears) often appear on the runway, causing a crash. I have included the Runway Tears Awareness thread link below, which attempts to consolidate the va…

Many of us who own the ORBX NZ mesh have discovered that it was likely responsible for consistent ‘connection lost’ messages when in flight. Removal of the mesh has been completely effective in addressing the issue. Can you confirm that any ORBX mesh that forms part of this world update has been checked to ensure it doesn’t trigger the same issue?

There are a lot of autogen airports where blue taxiway lights cover taxiway centerlines or otherwise obstruct taxiways, causing you to have to run over them.
Is there any way to tweak the AI system to avoid placing taxiway lights where an aircraft might taxi?

Third-party airport designers will sometimes place static aircraft on the field and at gates in order to give life to the airport. Unfortunately, this has the downside of taking up valuable gate and parking real estate. Some people love static aircraft. Others consider them a dealbreaker that would prevent them from making an airport purchase.

This came up in a recent thread for Drzewiecki Design’s KEWR, which has static aircraft. In their offering outside the Marketplace, their installer has an option to remove them. Could we ever expect something similar for airports offered in the Marketplace?

(A similar question could be asked about enabling and disabling airport interiors for systems with lower performance.)