1.9 (the latest version) has the new sounds. Happy Flying!

This mod may interest you. There also others that clean the exterior and they are spectacular as well.

✓ Flysimware 414AW luxury interior is a Microsoft Flight Simulator 2020 mod created by Raller. Download for free to enhance your experience in MSFS 2020.

Yes this mod looks really cool! The German 414A on Flightsim.to uses this as standard interior. 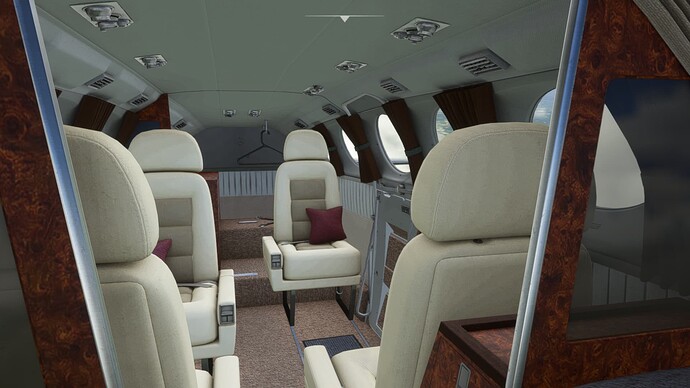 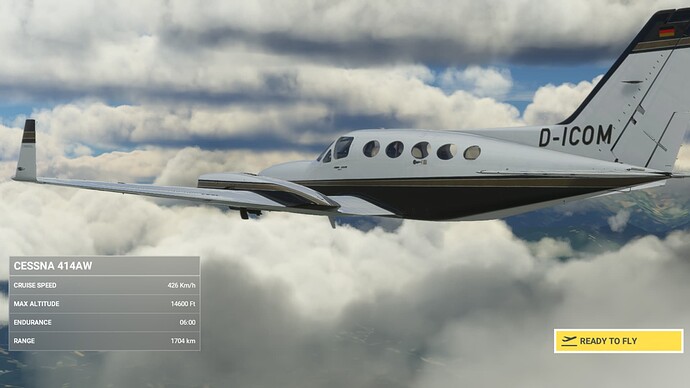 But the pilot and copilot seat must be exchanged to the original white-beige original texture to get a better visual match with the passenger seats, and maybe the panel should be coloured to middle-grey.
I have installed IntelTextureWorks1.0.4 an hour ago as Photoshop 2020 plugin to begin texture editing on this new operating system

What you are seeing is a consequence of the auto mixture being forced on in this aircraft to get around sim issues related to turbo charged engine modelling.

Hmmm… maybe not a perfect solution, but at least the Cessna behaves realistic and the immersion is not getting broken by starting to pull the mixture lever back beginning at 5000ft or so to keeps these props spinning *ggg

That seems to be the case…

Thank you! Not even close to RL!!!

Regarding the behavior of the turbochargers, you may be interested in this mod. Mixture Behavior Mod for Turbo Arrow, Seneca V, and Turbo Bonanza

It uses code to fudge the mixture behavior so that if you use a hardware lever you can treat that realistically (i.e.: full rich to critical altitude) and the software lever compensates to achieve that.

Earlier efforts seemed better to me.

It’s my understanding, from what I have seen the developer write, that automixture is coded into the 414 itself, which means it doesn’t matter if you have automixture set on or off the the game settings.

That is indeed the case, which is why this mod author provides instructions for disabling that feature yourself when installing this mod.

OK. Thanks for that.

it doesn’t matter if you have automixture set on or off the the game settings.

That is 100% correct. That was actually a community inspired change to a .cfg file that was discussed over on Discord, and then implemented in one of the updates.

For those of us who enjoy this aircraft, I highly suggest heading over to the Discord server for Flysimware. Mark (aka Momo) is on the server every single day and responds to just about everything. In fact, I believe the entire dev team is part of the regular group.

This is truly a community-based beta release. Mark looks at all the feedback and responds very quickly. The new sound set is a direct result of community involvement. It’s really great to see this model evolve and improve with each update.

That is pretty much what having auto mixture enabled does. All the mixture lever basically becomes is a fuel on/off control.

It’s not the same thing. Auto mixture does what you describe, fuel on/off. This mod still allows adjustment of mixture settings in flight as normal, which is the main attraction of using it. If you don’t care about that then it’s probably not worthwhile to install.

Right so it’s a bit different. So I think what you are saying is it behaves the same up until the critical altitude and then comes into its own above that.

A placeholder, in their own words. I’m not sure entirely what that means.

That it’s a work in progress, with further work to be done would be my interpretation.

Well, sort of but not really. You’re probably familiar with how default turbocharged engines behave, which require to be leaned during ascent as if they were normally aspirated. The purpose of such a process is to obtain the mixture setting that makes the engines produce “best power.” Automixture achieves this by enforcing a “best power” mixture regardless of the position of the mixture levers.

For a turbo/supercharged engine, full rich is supposed to be best power mixture up until the critical altitude, at which point the turbos are working at maximum capacity but the air is too thin to maintain the same airflow as before, leading to a reduction in manifold pressure and the necessity to lean the engine to continue producing best power.

At any altitude, even below the critical altitude, the mixture can also be leaned in cruise, similar to how you would in a normally aspirated engine. You may want to lean for “best economy,” for example, or simply want to reduce engine temperature by enriching or leaning. Automixture doesn’t allow this because again, it enforces “best power” mixture at all times.

Basically, the mod allows you to experience fairly realistic turbocharged engine mixture management, without overly restricting your freedom to use the mixture control like automixture does.

Yeah I understand why what you called the default turbos are not working and also understand how this mod comes into its own above critical altitude as I said. The part I had perhaps overlooked was the other potential uses. I might give this a go. Thx for the heads up.

Just a quick summary to add to what @Synoxys787 said: the mod will set the core sim mixture setting to an appropriate level based on your hardware mixture lever. Whether you are below or above critical altitude, this allows you to set mixture in a realistic way. If you are cruising at low altitude, you can still lean the mixture.

Before making any changes to textures, it might be prudent to wait until the default textures have been updated- there are quite a few interior changes coming soon, including to seats, instrument panel, glare-shield, etc. The changes look really nice and are very high res.

I also like the idea of colouring the metal panel to mid-grey, something about the blueish tint of the default metal looks a bit off to me. But any changes now will probably be lost with the update.