Im done with this sim on XBOX

Will we soon hear info about the upcoming SU10 testing? Yes I’m impatient can’t wait for us to test it

The funny (or sad) thing is… when the sim was released my very first reaction in this forum was: „this community folder will cause trouble“… wieder mal Recht gehabt

we hope to improve the stability here soon

Being that we’re getting close to the SU10 beta release, is there still an opportunity to check-in those stability improvements to SU10? (In other words, is SU10 still in active development?)

LOL. Dude says it "should never have released for console because “it’s a PC game” ". Yeah, sounds like gatekeeping to me.

And I have literally ZERO problems playing on Series X.

Just because it doesn’t run well for some, doesn’t mean others should be dragged down. I see that alot on this forum.

Hello, I can understand the frustration. this is exactly why i sold my xbox and bought a pc with it. I9 and RTX 3090 and everything is going great now. 4K and everything on Ultra, a dream and the Fenix ​​A320. It’s so much fun.

Regardless, the sim was released for PC and console. People can use it however they see fit on whatever platform likewise. The seething rage from people on this forum because of it is childish.

Let me give you an example of gatekeeping.

That’s gatekeeping. Stating an opinion about the technical facts is not gatekeeping. Please don’t make things up along the way, ok? Thanks

I haven’t done very much myself with my Xbox Series X except to buzz around the Hawaiian Islands in the F18. I haven’t had any problems but then I didn’t ask much of the sim, just doing VFR with MP, live weather, ATC, etc., all turned off.

But as to the value of having the sim run on an Xbox, I am not going to tear down my PC rig, drive 100 miles to visit the grandkids, rebuild my PC setup there, tear it down at the end of the day, rebuild it again at home, etc… It’s much easier just to throw the Xbox in the car along with my HOTAS ONE controller and Thrustmaster TFRP pedals. And it turns out the grandkids seem to have a fear of flying and aren’t very enthusiastic about MSFS (they’re 5.5 and 9 years old) but they go bananas over Forza Horizon. So I can just toss my Logitech G923 wheel and pedals plus an old Black & Decker Workmate bench to mount the stuff into the car along with the Xbox with relatively little wires and connections to deal with, unlike my PC. Hurray for the Xbox for having fun with the grandchildren! Perhaps if their parents let them see Top Gun: Maverick, they’ll be more enthused in the future about giving MSFS a whirl on the Xbox.

I moved from Xbox to pc mainly because I needed a new machine for work purposes.

When I initially bought the premium on Xbox the game ran for the most part, fine and was very impressive.

The only real issue was the night bug when all the lights were broken that time, then I moved on to pc.

There’s no doubt, regardless of how it runs for you, that the constant updates have effected performance because it’s been a rollercoaster these last 6-7 months of fluctuated experience.

It has nothing to do with add-ons, yes sometimes they cause crashes but if you buy them from the marketplace they should be fully tested and working especially in a closed system.

That’s where the problem lies. Let’s see if the easing of updates helps.

I’m thinking of doing this but my knowledge of the PCs and putting together a good one is pretty limited. Any pointers

X-Box has a community folder?

It’s a nonsensical rant and nothing more. It is not an attempt to be constructive.

Actually Microsoft revived the sim to make it available on their own hardware platform and use it as a showcase. Console gaming is huge business and Microsoft is competitive in it.

Microsoft has plenty of cash cows in the PC world and games are not it. Most modern games require very expensive PCs that most consumers can’t afford. This sim flops in the Xbox and Microsoft will pull the plug again. That can happen anytime.

There is definitely room for improvement, to say the least… In particular on the addon side and the performance/CTD. I can’t talk for the Series S, as I own a Series X, but even with all the issues (and the addon ones are unacceptable on a marketplace in my opinion) I’m still enjoying the sim a lot. I could never dreamt of Flight Sim coming on console and they made it.

Yes far from perfect to fly with peace of mind. Looks like the Series X is barely holding up with the sim so I guess the Series S is struggling even more. Their main fault is to have push it on a hardware that is too limited.

Because we need to remember that for 300 or 500, we can’t just have the same level of performance compared to a 2000/3000 PC, that’s a fact. We can complain and ask for better optimisations but no one a magician.

No, but it doesn‘t have the addon linker either ^^

But having something like this can make live much more easier.
I moved EVERY optional Addon from the installation folder to my “OFFICIAL” folder and can now select which AddOn I want to use. With the click of the mouse. And no extra Downloading! 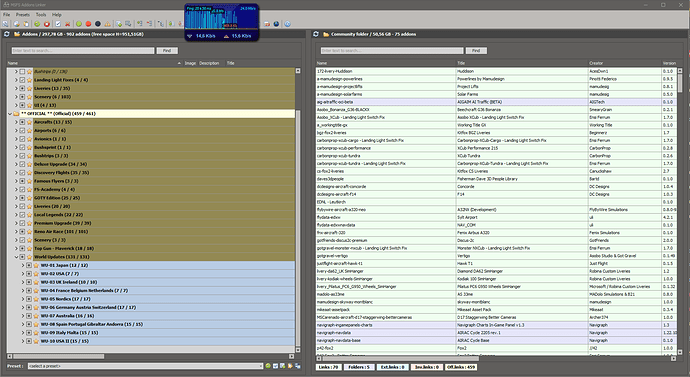 Something like this, built into the sim, and a lot of people (X-Box and PC) would be much more happy.

Didn’t even know that this was possible. Brilliant man, thanks!
Just drag’ndrop?

Get used to that feature first!
You can easily destroy your install.
Therefore I will give no manual how to do it.