The water that we had at the start of the sim is gone. What we have now is far from it, perhaps the uggliest water of all the sims I play, and I do play sims from 2009.

Just some observations. Everything set on ultra. 200mb stable connection.

It was far better then this before & at release. Give those with decent computers the option.

Is it just me , or are the clouds even worse then before after update #5 ? 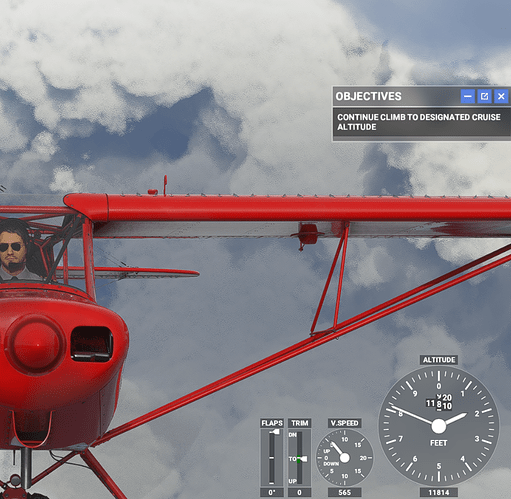 The rendering is happening right before me , as in the beginning (first install) this happened far in the distance. All for improving fps ?

Clouds has a huge hit in performance. I imagine they are feeling the DX11 pressure, the RTX 3000 series release pressure and are watering down everything to look a bit better in benchmarks. Yes, we do have now a simulator being part of every major benchmark out there. At least for GPU. Let’s see if Zen 3 will include MSFS in their reviews.

It is unfortunate. I have a GTX 1060 6GB and was flying with most thigs in low and clouds in ultra to have that special treat in my flights. Now it is gone. The ultra clouds looks more like the old high.

Honestly, I never saw a studio screw things so much at every update, and we don’t even have six months of release.

Its not just you its the sharpening filter which is overdone in this build is also affecting the clouds.

thats looks more like film grain filter to me
which is overdone
Trees, clouds , fuselage
hate this effect so much

It has to be which is very similar to the Nvidia driver version.Only way to turn it off is turning the sharpen off in the usercfg.opt I mention in a few other threads but the fallback with that the sim appears fuzzy with it off.
We may have to start a thread to vote it out.

It was perfect in the release version
Perfect
LOD trees clouds at least were better
Now too much sharpening too much film grain
everything is grainy kinda
but yea i agree
UPDATE : Seems like this hotfix fixed more than CTD im seeing better image quality 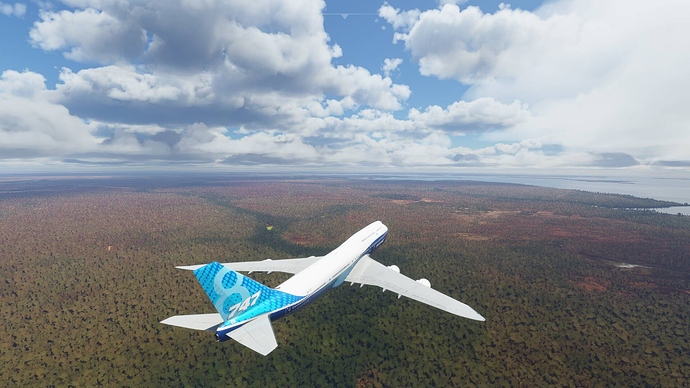 True , the graphics where at its best on the initial installation , my fps ( you would almost think that’s the most important …

Water is slowly becoming a real bummer in this sim ! I thought it kinda improved with the latest 1.10.7 update, however as I fly more and more I changed my mind about it now.

Without going into a very long rundown of FS HISTORY (though the explanation will be long, sorry)
I will say that FSX was literally unplayable at Ultra, for years, because the commercially available hardware didn’t exist at release, to permit the sim to be played at that setting. It’s like they future-proofed the sim (perhaps because they expected the closure of the studio?).

MSFS, in the trailers and other videos, shows a sim that I do think exists but I think this time MS decided they wouldn’t just drop that ‘unplayable’ sim to the public, coming back from a long absence (and a rather troubling exit from the community), and risking the literal years of complaining that ‘it won’t run on my system and it’s a good one’.

With all this said I think the sim is what it appears to be in the trailers and the videos but they cannot release that ‘whole version’ because it won’t run on currently available hardware, at those levels. Even with the latest flurry of CPU and GPU news, it’s probably still a few years out before the hardware we can get our hands on will run the sim to that degree.

So now we have a lot of people angry MSFS won’t run at Ultra on their current systems. Some probably know there is no way it was EVER going to run on their system, despite protestations to the contrary or perhaps ‘fudged’ publicly declared specs. I think this is where the ‘alterations’ to the sim may be coming in.

Asobo and MS maybe be trying to accommodate as many systems as possible, while trying to tamp down people who are balking at the performance they see in the sim. I am not so sure the right approach is to reduce certain elements in the sim on a macro level and would rather have it customizable on a micro level - this way we can all work with the settings on an intimate basis, to get the most out of what we each want, without imposing our priorities for graphics upon everyone. There may be a reason why they have to do it on a macro level that we don’t understand at this point.

It will be awhile, as they also work to get the Xbox version and DX12 out, before I think we can expect a more directed rebalance of what we are seeing. There will be improvements and resets along the way, but I think we will get that Trailer/Discovery/World video version, or it’s close cousin, sooner rather than later.

Even with the latest flurry of CPU and GPU news, it’s probably still a few years out before the hardware we can get our hands on will run the sim to that degree.

Either they rewrite the code or in ten years we will be playing the same. There is no future hardware to adress DX11.

I guess the dilemma is: are they going to make it truly multithreaded or not. Because for years now we have some impressive hardware to be used. A 5950X has 32 threads and it is way ahead Intel in IPC. In other words, a little monster.

This myth of the hardware for simulators was true back in the early 2010s. Not now.

This myth of the hardware for simulators was true back in the early 2010s. Not now.

This may, or may not be true. But what is true is often people’s incorrect assumption of how multi-threaded software works, one of which being that if all their cores aren’t running at close to 100% then the software is somehow faulty, or unoptimised to some gross degree.

But what is true is often people’s incorrect assumption of how multi-threaded software works,

But you can’t dispute that MSFS has only one core to draw most of the calls. So from all the reviews, a good six core (no hyper threading) is all it takes to run the game. Then we might assume the upcoming Ryzen 5 5500X (six core / six threads) is the cheap option for everyone, being the Ryzen 5 5600X the king of cost benefit.

That’s not too far from the old qua-core / eight threads of the ancient past of single threaded games.

So in this regard yes, we are still in ancient times playing MSFS. We could say it is a Sandy Bridge type of title. Ryzen 5000 gave it a good boost because of what? IPC. Exactly what everyone talked about during the i5-2500K era.

Hardware Unboxed said it was bizarre, and I quote “bizarre” that MSFS is DX11. So all this talk of “NASA hardware” for flight simulations is just a myth that has been thrown around for a decade. And then people settle down thinking: “I need to get a R9 5950X”. Bad wish. You won’t get a frame. Perhaps a couple, since the max turbo is a bit higher, which bring us back to IPC and clock.

I knew it from the time I heard they saying that the code was made on top of the MFX 2006. This back in 2019. I foresaw all the problems we are having now, with is a pity. I thought the ‘Sandy Bridge era’ for flight simulators was over. Rude awakening.

Perhaps MSFS 2030 will get it right, because I doubt that they will rewrite the code to DX12. With the bug fest we are having now, if they try to rewrite it for DX12, we will continue in this pace until 2025. DX12 might bring Ray Tracing and a few other blings, but I’m not sure they will tackle the core usage as it should.

Different people want very different things out of the sim. What I don’t get is, why downgrade it for all to upgrade performance.

Some people want stutter free 60fps or higher, personally I’m fine flying as low as 15 fps with the occasional stutters. Even lower when AP is doing the flying (which is 90% of the time) So give me the option to increase the LOD ranges (above 2.0) on the fly instead of having to edit cfg files. (Or turn it back to the way it was before so you don’t have to increase beyond ‘max’) Then I can dial back detail for hands on landing / take off, and turn it up for the eye candy along the way.

They included the option to limit fps to 20 (which I have enabled) yet leave all this ‘headroom’ to not utilize currently existing hardware at 20 fps. I’m ‘angry’ Ultra does run on my 16GB 1060 laptop. It should not have any business running anything on Ultra.

I would love a hi-detail screenshot option like Elite Dangerous where you can take 8K screenshots. Got to have something to look forward to for upgrading.

I think the first version was too bad. I know that most general aviation simmers pan the view with the mouse and everything, but they can’t release a game for the open market, Xbox and all with that kind of performance. I’m not sure the reason for the recent downgrades, perhaps Xbox (they might have access to Xbox samples), but they will have a lot of work ahead to compromise things.

Which is a pity. The release version was a treat to the eyes, but for me it was unplayable.

Well said - and I agree - I would much rather have a wider range of options in the graphics to fine tune what is important to me, to have higher fidelity in certain aspects, at the price of perhaps some performance - this way the sim can adapt to each person’s wishes as closely as their system will permit. And as tech advances and optimization improves, that fidelity will expand across more areas of the sim, for more people. Let us decide what ‘price’ to pay for certain aspects we feel are necessary to enjoy the experience.

But you can’t dispute that MSFS has only one core to draw most of the calls. So from all the reviews, a good six core (no hyper threading) is all it takes to run the game. Then we might assume the upcoming Ryzen 5 5500X (six core / six threads) is the cheap option for everyone, being the Ryzen 5 5600X the king of cost benefit.

During my tests, I’ve tried to see whether cutting in half the number of cores FS2020 is running with would allow freeing some of them for background Win10 tasks, so that if there is such background task popping in it wouldn’t affect FS2020 multi-tasking scheduler.

Results (non scientific whatsoever): when running only on 4 cores on this CPU there was no difference at all performance wise, no additional stutters either. Given the average load on all cores but 1, I even wonder if it wouldn’t run the same on 2 cores only.

Of course once they implement DX12 they will be able to take better advantage of multi-core for rendering.

Another patch is out and we got another downgrade of LOD quality… Sim now looks good only about 1mile around plane.

Today’s downgrade is even mentioned in patch notes: " * Optimization on photogrammetry loading"

So tell me this Is not intentional…

And the worst part is it didn’t help with performance.