Has anyone advice for the setup for this or how to make it work?

UPDATE SINCE ORIGINAL POST WITH LEARNINGS AND FIXES:
For those who wants some key information from below…
How to ensure a clean updated installation for native support:

Clash with the Freetrack plugin in Opentrack (feedback from donka73
Opentrack under the Output options ensure Freetrack is selected then click the hammer icon next to it for settings. Under Select Interface, select Use Freetrack, hide TrackIR and ok this. Now start head tracking in Opentrack then stop it again. Now exit Opentrack, fire up MSFS and see if Tobii is working in sim.

Depending on the version of MSFS, the button to ON/OFF is in various placed.
I am using a Steam version and for me it was in the Camera settings, when loaded in to a flight.

(Above is just for native support.
There are other options to make this work with 3rd party tools noted in the comments)

I can not get it to work either. Looks like a no go. Maybe it just does not work with directX 12. Maybe i will switch back to 11 and see what happens.

I just went back to activating the FaceTrackNOIR and it works

I can not get it to work either. Looks like a no go. Maybe it just does not work with directX 12. Maybe i will switch back to 11 and see what happens

How do you choose DX version?

Why I am not surprised? I am sure someone said that the feature was implemented but no one checked it was working. I can confirm I cannot make it work on my end either.

where is that option?

It just worked for me, I didn’t do anything. It’s way too sensitive however but at least it’s in now. Hopefully they will let us tweak settings. DX11 btw, not tried 12 yet.

Are you using FaceTrackNoir or any other plug in?

No. Just vanilla tobii 5. I literally did nothing and it works.

If you used Face track noir before you have to uninstall with all the plugins and restart pc, then it should work. compared to facetracknoir i find it super smooth, sensitivity just right and eye tracking very helpful. I agree though 6dof is a must in the future, same as tweakable settings, everyone wants different sensitivity.

thanks Tobii and Asobo

have never used facetrack noir. so that is not it. Tobii works in every game i have that supports it. just doesnt do anything in mfs

You DO NOT need to uninstall facetracknoir to get it working!

I have both TrackIR and Tobii 5 installed on my PC. I also use Facetracknoir for several other apps (IL2, DCS FS2020) when I don’t feel like using trackIR with the hat. They have worked independently without issue for a long time.

Enter SU7 MSFS2020. Poor implementation from Asobo/Microsoft. It uses the same TrackIR ON/Off switch in the camera pop-out in game options and is hard coded with zero adjustments/setting. Only 3 Dof support. Only game that has had worse tobii support IMO is X4 foundations.

Here is what I did to get the basic tobii working -

Note - Tobii is much smoother on the movement and tracking with the native tobii support in MSFS2020 vs facetracknoir with the tobii plugin for msfs2020… but only 3dof and NO settings as of yet… so back to facetracknoir for me… for now.

Come on Microsoft, Asobo and Tobii - you can do better than this!

Tobii and TrackIR get super confused if you happen to own both products.

This is not good implementation. Please give us independent on/off for tobii like TrackIR gets in game and the ability to change some options like “turn off the eye tracking” if we just want head tracking, and allow us to set curves and sensitivities.

I would call this a beta implementation as it is.

P.s. I also updated to the latest driver like @MortThe2nd below posted. This was actually step 1 - always update to new drivers on new product launches IMO

I had the same issue, but after downloading the latest driver from this page (as per the instructions, apparently Windows doesn’t pick up on these automatically), everything just worked out of the box.

Once your eye tracker has been plugged in, you should automatically get the driver via Windows Update and the Tobii Experience app from Microsoft Store. But, if you are not getting the driver or the app, please download the driver below.

Please note that the version displayed in-app is the app version, not the driver version. This version is not yet available on Windows Update so download now to get the latest driver and potential app updates.

Here’s the link to the latest drivers; https://files.update.tech.tobii.com/Tobii.EyeTracker5.Offline.Installer_4.124.0.15937.msi

Maybe this is a stupid question, but where can I fint the settings for tracking?

legitimate question , although atm there are no settings to be tweaked sadly

I got it to work doing a clean installation of drivers and software:

My Tobii Eyetracker 5 is working out of the box with MSFS update SU7 even with DirectX 12.
The preset is usable but i am seeing forward for more tweaking options in future updates.
For example when moving only the eyes in the corners of the screen, the camera doesn’t stop moving. 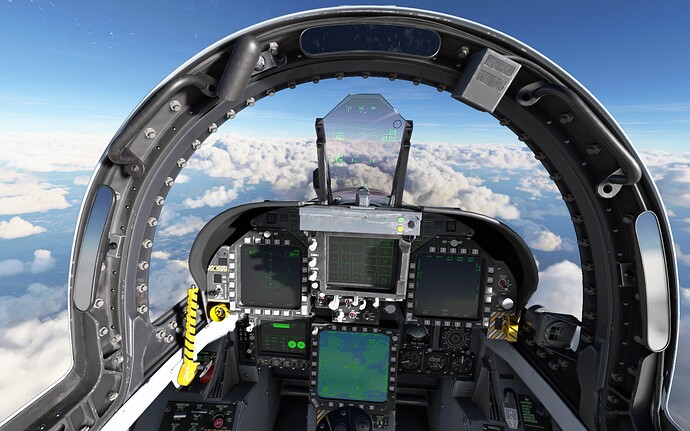 Thanks for all the great feedback everyone! <3
Summarising what I’ve seen around the forums.

Thanks for all the great feedback everyone! <3

I am very happy to have this work now! VFR is soo much better and I enjoy it so much more.

I do have a question/request : Could it be possible to disable the eye tracking, so only head tracking is used? I often have to look down at my keyboard and it would be great if the screen didn’t move while I did it