The new Nvidia driver 517.40 has arrived. Hurry up and grab it be the 1st on the block! Bwhahahah

no update for me in the NVidia GEForce Experience

Its the studio driver Im installing it as we speak.

No Updates on my end According to Ge-force Experience still 516.94 perhaps their rolling in slowly, also looked via Nvidia Website Nothing.

Only the Studio driver is showing.
Rather, what we’re interested in the “Game Ready” driver which should specifically mention FS2020.
But this hasn’t been released yet according to the GeForce Experience.

Can Confirm as of now it is only the Studio Driver 517.40 that has been updated

I’m guessing the Game Ready driver is just around the Corner. 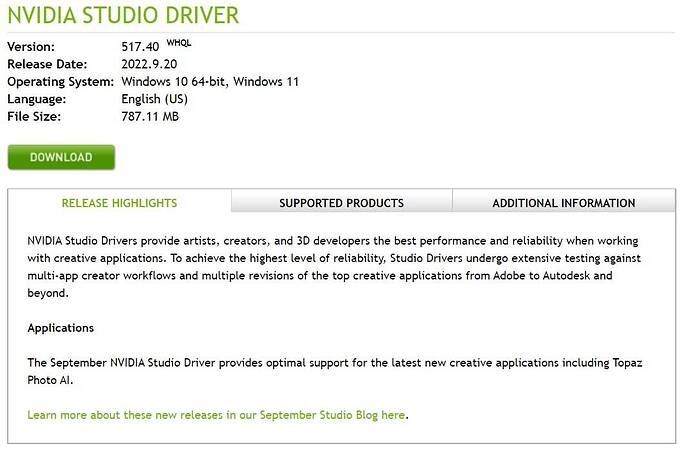 It will be very disappointing if the game ready driver only has the image corruption fix (presumably the trees) and not any improvement on VRAM, using DX12 for me and many others is impossible because it just exceeds the available VRAM and brings the sim to a standstill in a way that DX11 doesn’t.

Just fired the sim in dx12, still horrible fps, looks better though, booting now to 11 and see if that brings anything to the table.

The VRAM improvement part is on Asobos side. NVIDIA driver is supposed to fix the graphical glitches that were occurring. If I’m not mistaken.

The VRAM optimization was causing the artifacts and they needed Nvidia to tweak the driver. Once that is done, the will unlock the VRAM optimizer again

Thanks for clarification, and that will come in the live build tomorrow?

It’s been so long now I can’t really remember but I thjno I also had VRAM problems in the first beta build. It would just shot over my available VRAM and go down to single digit FPS, if that build had VRAM optimisation then it looks like DX12 will still be impossible for me sadly.

Just ran it in dx11 same as 12 looks great but runs like ‘insert 4 letter word here’. I hope this isnt what tomorows goin to bring…

I’m pretty worried. I don’t think I will be able to use DX12 as only have 8GB VRAM on my 3070 which is fine in DX11 but brought my sim to a standstill in 12. Really hope that all will be well tomorrow…

If Nvidia releases the game ready driver, then Asobo should release the “Kraken” DX12 with VRAM optimizer.

At least, that’s what the plan was!

Yes they wanted to give us one more beta after the driver dropped, guess they got tires of all the whining in the forums over how long its taking them to release this one…

Someone said today they were working on a race car game, wonder if thats going to be in the cloud as well?

Hmm it’s hard to tell man. I really don’t want to be the one with bad news, but when I was using it on the first beta build, it was pushing 10GB at least out of my 3090 Ti.

But remember that even though that’s the case, DX12 is still far from fully being optimized. I mean, it would be crazy for any game to use that much VRAM in my opinion.

Yeah, it’s tricky. I will be just sad if suddenly all my settings have to go down, because of DX12 which is being billed as being an improvement, for me it definitely won’t be an improvement if it means lowering settings.