If that speculation is true, I’d agree with you. I guess we’ll see! 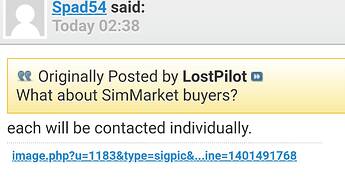 It appears you will all be contacted

It’s kind of a shame he’s having to do it, I actually love so many aspects of the plane (particularly the flight model, buffeting and wing stalls are done really well for instance) but it’s just such an eyesore. I wouldn’t even ask for a refund if I knew he was about to update the textures and visual model or hire someone to do it.

Your apology is appreciated and accepted. Let’s move on, and hopefully your future releases will not suffer from this. This is a learning experience. Cheers. Thanks for bringing the aircraft into the sim, despite its faults.

As for me, you can keep the money from my purchase, no refund of any kind is needed or warranted.

Definitely put a place to donate on your freeware page!

Darn it. I was just about to buy it, realized it was no longer avail
I don’t think planes necessarily need to look “asobo” visually if it looks decent, sounds and flies well

The L-19 is no beauty queen but its one of the best birds available afaic.

Hope this thing is re-released, soon

I second the donation idea

It is available for free now:

Oh! Ok thanks for the heads up i thought itd be on the GAS site

Found it with the link @CrypticLab posted.

See, this is EXACTLY why it’s important to have these discussions in the community. I raised an issue, a few others did, the developer (whom I have now been in contact with) is a great guy and he heard the grievances. This won’t happen again with their products, I am confident of that. And in the meantime, people will have a free aircraft to enjoy. I applaud him for handling the situation the way he did and setting things right. I have ZERO issues with Golden Age now. They have something else in the works right now, it should turn out great!

This is so true. You had two extremes in one day. This guy apologizes, refunds and gives the aircraft for free. The other guy tells a story about indians.

In my opinion the plane is still worth the price as it is, after the period for free purchase is over.

Hahaha! Yup, that’s pretty on point… But hey! 3 new aircraft in one day… Well 2 and an empty matchbox in “collaboration” with Indians.

SimMarket is being totally unhelpful in assisting with refunds. Please contact me directly to our support email address should desire a refund.

Since you’re making it freeware I HIGHLY suggest uploading it to https://flightsim.to/. There it will get a lot more traffic and get your dev group name known for a future payware release.

This is a good suggestion. It would be a good way to convert lots of folks who would never know about your planes into potential buyers of your Stearman

SimMarket is NEVER helpful with refunds. I had two situations now with 2 products on SimMarket. In both cases I requested a refund. First case was false advertisement against Perfect Flight. I had to jump through hoops to get that back. Second was just yesterday with an aircraft that was released containing work of another payware developer. I requested a refund because I wanted nothing to do with supporting copyright infringement and their response was always to defer to the developer - who promptly refused to issue a refund, so I will be disputing that through PayPal instead. F*** SimMarket. They won’t even pretend to protect the consumer from a product that was scam.

That being said, regarding the Sportwing what I said before stands. I don’t want or need a refund on your aircraft.

I’ll investigate that option tomorrow. Thanks for the suggestion.

Just sent an Email, I wish simmarket was better about handling these sorts of things but they arent and as others said, they really don’t care about the customer. Id would like to add, you did make a mistake with the plane, but owning up to it like you have has made me think much higher of you. Thanks.