In addition, Xbox Live Gold is required on both Xbox and PC for this type of multiplayer mode.

Does this mean even if you buy the Reno pack, you can’t actually play it multiplayer on PC unless you pay some kind of subscription? That would be dissapointing!

Edit: I’ll have Jorg confirm for sure in the Dev Q&A tomorrow!

That would be odd because Xbox Live Gold is not really a thing for PC. Games like Forza Horizon, Sea of Thieves etc do not require Xbox Live membership for multiplayer on PC even though they do on console.

@Jummivana Can I fly the planes that come with RENO RACES in the regular world or only in the races?

Ok, so this is the shape of the “10 years of development” I guess.

Quick question. I guess this fixes the multiplayer experience and logbook/profile/achievement progress wipe issues? Do regular users benefit from that also or do we need to pay for the DLC to get the bug fixes?

I hope this will be a huge success and they make a Red Bull Air Racing DLC next.

Adding an infographic to the article: 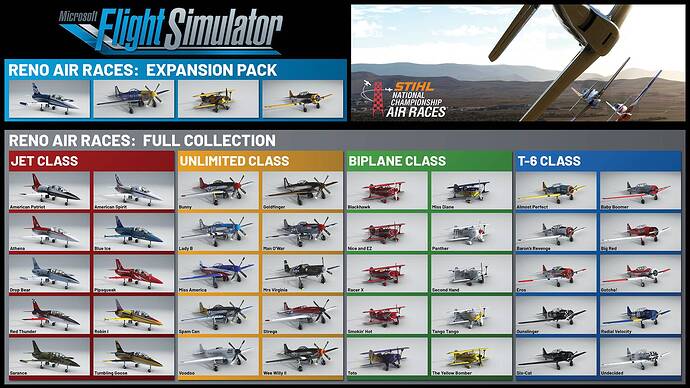 So it looks like four planes. With different liveries and from posts above different cockpits.

Do each different named plane under the class have different performance characteristics or are thei differences limited only to liveries and cockpits?

Having to get Xbox Gold would be weird for PC users. Can PC users even get that?

Edited my comment above, I was mistaken. Pretty sure just Xbox needs Gold, but regardless I’ll have the team confirm 100%.

From the last few dev talks. It seems that any changes to the sim needded to support an expansion pack gets put into the base sim. What you pay for in the expansion pack is just the content needed for the pack.

So I would assuming that any part of the sim being fixed or changed for Reno will come to the base sim without needing to buy the expansion.

They said the same think about helicopters. All the needed changes to support helicopters will be added to the base sim. But whatever content they create (aircraft, training, missions, flights, etc) will be part of the expansion pack.

Yes that’s right. Any update made, like improving multiplayer, will be in the base sim, so those who don’t purchase Reno will still feel the effects of the update.

There’s quite a lot of difference between the models of P-51. The “A” model Mrs Virgina, in real life, has a different engine to the rest of them (Allison V17 against a Packard Merlin for the rest). And again in real life, some of the heavily modified P-51’s something like Voodoo depicted here, is over 100mph faster than the stock P-51D varrient. I don’t however know if they will have different flight models but in real life, the selection of P-51’s they have gone for have varying different top speeds.

You don’t need Xbox Gold to play multiplayer in any other PC game, including Microsoft games, like Forza Horizon, Sea of Thieves and Halo: MCC, etc. so it definitely won’t be required for MSFS on PC.

News sites always lie or speculate, just Microsoft or Asobo will announce when it will be available

How does the racing experience work?

Very good questions. Will there be a global league table etc?

@Jummivana can you shed any light on this? (About now the Reno Race DLC will actually work)

Question 1 ) In the Reno blog is states ‘All these amazing aircraft and the full online racing experience are included, all for $59.99.’ in the Full Collection.

Does this mean the $19.99 version doesn’t include the online game mode?

It’s a great time to be a part of the Microsoft Flight Simulator community! We announced and teased at gamescom that Reno Air Races, the world’s fastest motorsport, would be coming to Microsoft Flight…

Wait wait wait a minute. They said it will be free when they first announced… now it’s for money???