Planes pull hard to the right on take off

I’m not sure if this is a controller issue (haven’t found anyone else with this issue) or a sim issue.

When I fly single prop planes, like Cessna for example, when I go to take off all of a sudden the faster I go the hard the plane pulls to the right. I use the rudder to bring it back but it gets so bad the plane gets out of control.

Once it reaches the point it’s pulling so hard to the right I usually have just enough speed to to lift off.

Once in the air everything is fine.

I am using the Logitech flight yoke system and I have re calibrated it in settings but still have this issue.

Please if anyone has any idea on how to fix this I would greatly appreciate it. I do realize this single prop engines do have torque and will slightly pull but this is to the point the plane gets out of control just trying to correct the pull.

There’s nothing to fix, at least for us. You are probably correcting for crosswind, but because of the way Asobo have implemented this, you don’t experience that crosswind when standing still. It is literally turned off. As you accelerate the crosswind component comes in, and it can be abrupt, so you aren’t read for it. It’s silly that your own movement controls how the wind behaves. I don’t believe this is a bug but a deliberate design decision probably to cover something else up.

There’s an interesting thread that describes this.

First of all, AWESOME analysis! I think you are definitely onto something here. Would love to see Asobo address this in the upcoming Q&A’s or even on the forum directly. Being a physics guy, this stuff is interesting to me but I’ll admit that I don’t completely get all of the gory details. Having said that, the same physics guy in me sees a possible bit of inaccuracy in your description/interpretation. Just in the units of the values you are highlighting. You say they are radians but it lo…

Once you realise this is happening, it all clicks. Sadly this will also enforce some negative learning, as at some point Asobo will fix this, and we’ll need to unlearn this behaviour.

I have the same issue here. Once in the air, everything is fine

Both crosswind, and gust implementation seem to be thoroughly broken.

Thing is, I don’t remember it always being like this. I wonder if it crept in when they made the change to the weather UI.

Yup it appears they’ve forgotten some sort of friction coding for aircraft when wheels touch at landing. Any crosswind continues to push you off the runway even if you have your ailerons into wind and steering with rudder. If you switch on “take off rudder assistance” that fixes it but then you’re cheating

Thank you all for input. I feel better knowing I am not the only one and or not a problem with my yoke system

I’m glad it’s a part of realism but yes the fact it doesn’t kick until your taking off or when your wheels are on ground some friction should be implemented so it would less effective would be nice.

I’m assuming since I don’t have this issue in the Airbus- least no where near that much of an effect- it is because the weight and size of aircraft.

I also feel like this has crept on. When I got the sim in February I don’t really recall having to battle the plane on the runway to take it off. Hopefully something can get fixed one day.

Yep, all of the above - on the assumption, of course, that your yoke is properly installed and calibrated and that you don’t have other functions/keys assigned to your axes.

I double checked and confirmed it was calibrated and installed correctly. Just for the fun of it I will take a peak at my controller settings and make sure no other key is assigned to an axis. I’m sure it’s not though considering I spent a good while unbinding keys when I first got the yoke system

Good man/woman.
Clearly you are on top of this.
If it all checks out then, inputs opposite to that wind are the order of the day.

Addendum:
By the way, often the easier more conclusive way to un-assign all those pesky default key
assignments is to just create a new blank profile and then add your own.

For testing I suggest you delete all wind layers and takeoff again.
Now your prop driven aircraft should pull to the left.

hobanagerik is spot on. And there are many problems with winds and reading them in the sim. Like the windsock calibration doesn’t match real life even though the devs seem to be aware of it going by the windsock animation config.

But, it doesn’t take much to be able to counteract it on the runway and in real life it can be very ubrupt in a light airecraft. Real pilots run off the runway too sometimes.

If you know where the wind is coming from on the take off roll then just be ready for it. I only fly the GA aircraft and the CRJ on occasion and have no issues unless the crosswinds are so strong I shouldn’t have taken off in the first place. It is mostly a practice and being prepared thing.

I’d say its bit easier in a real plane given the wind simulation but even what we have is workable and most times reminds me of flying my J160 is terms of realism. How much that depends on where in the sim you are and your controls I’m not sure. I have Crosswind rudder pedals and a proper yoke/throttle setup. Anything less will make life a lot harder I expect but that isn’t a sim issue.

Once in the air, everything is fine

Because crosswind doesn’t exist from an aerodynamic/performance POV when you are on the air.

S**t! broken, you say!
Something else to add to the ‘it’s not my end’ list then.
Gonna need a bigger sheet of paper.

Even when I don’t have Live weather active and no wind configured? It’s like a 40mph cross wind

Completey broken.
A while ago I did a few xwnd (20-30kts no gusts) tests with the Longitude and the results were totally unpredictable.
Sometimes it was very easy to maintain the centerline with rather small rudder input and in the next test with an identical setup, the Longtitude was suddenly blown off the runway without any chance to correct.

Without live weather and the wind layers manually deleted?

If your aircraft are still turning to the right, then there’s something wrong with your setup.

There’s absolutely a bug here. I posted a thread about this several weeks ago. I haven’t noticed a rhyme or rhythm as to why but it’s really weird and if you’ve ever flown a Cessna immediately know somethings not right with the hard right pull requiring left rudder. It happens fairly often to me, and as you mentioned as soon as you’re airborne everything seems to be ok.

I haven’t noticed a rhyme or rhythm as to why but it’s really weird and if you’ve ever flown a Cessna immediately know somethings not right with the hard right pull requiring left rudder.

If the wind is coming from the right, the plane will pull in that direction. I think the two issues are that the crosswind component is introduced as you accelerate, and the degree to which the weather vane effect is modelled, with a possible third issue with rudder effectiveness.

I plan to shoot a video later with dev. mod on showing the crosswind readout. If you’ve ever sat on the runway with one of the Garmins showing you the current crosswind, know that it is lying to you until you get to about 40-50kts.

To keep it simple, I plan to show a takeoff with wind coming directly from left or right, so runway 90, wind from either 180 or 0, with wind set to 20kts to give me a 10kt crosswind with 0 gusts. I’ll then add a gust of even 0.1kts, then watch what happens.

I shot a few take-offs, both with and without the gusts, as minimal as I could make them. Even then take-off is arduous to say the least, and I think that attempt was about the best I could ever manage. When you customise wind, the default option is to have 2kts of gusts, so 20 times larger than this. 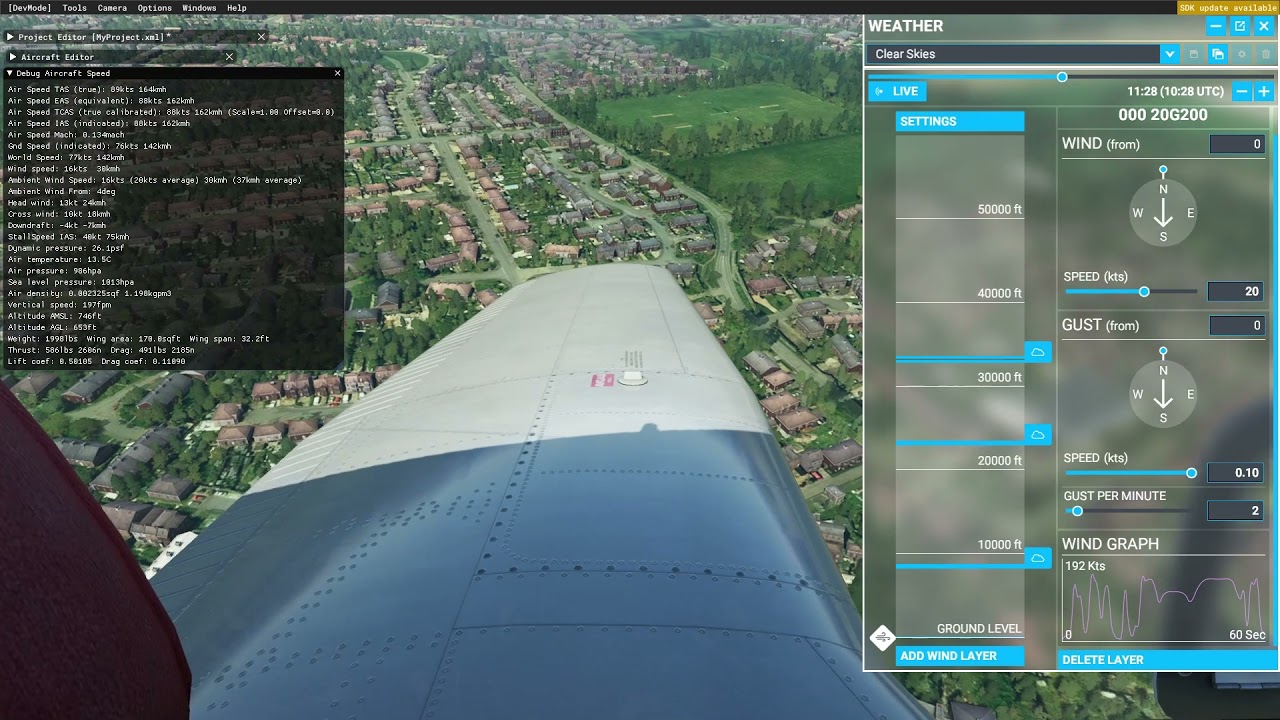 Keep an eye on the crosswind readout on the left, and watch as it creeps up as my speed increases. You’ll see as I roughly keep my heading the crosswind component creeps up to match the overall wind speed, which is listed a few values above.

It’s even more interesting to see what it does when the gusting is turned on. You’ll see at times it gusts double what the overall wind is configured to, and not that 0.1kt gust I would imagine it should do. The gusting is actually doubling the wind speed at times, which makes it next to impossible to maintain the runway heading as it is not consistent, with the wind speed changing by nearly 20kts at times. I’m actually really surprised at that particular take-off as they normally aren’t like that at all.

This is what usually happens! 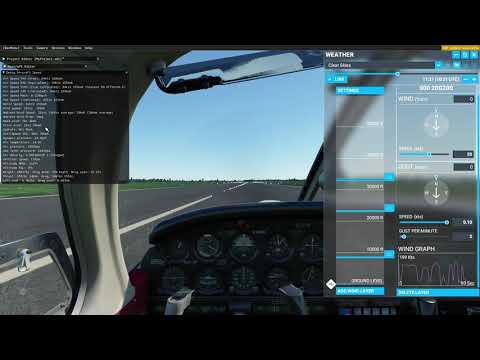 AFAIK yawing to the right at takeoff is partly generated by propeller torque (in one engine planes). The crosswind combines with that by pushing against the rudder. I started right now with crosswind from the left with a Cessna and had practically no need for correction because the crosswind equalled the torque as it seemed.