So, is there anybody out there that has any clue whether we can use, or whether we will need Working Title G3000 after update 3?

WT will need to update the G3000 after the update but I’m sure it will work.

Have to wait and find out just like every other update…

If Asobo has been working with WT as they said they have I’m sure they’ll be on top of it. Asobo is doing more work on the Garmin.

I hope they include all of the functionality of Working Title. I have come to love that mod.

You’re right, per the roadmap… somehow I let all the other posts hyping today get to me.

Well, I’m not so sure. The roadmap (the picture version) published in the 25th Feb dev blog had this: 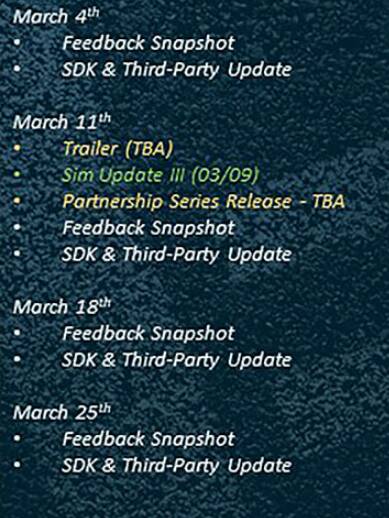 This was the same week they announced the hotfix and delay to Sim Update 3 - so this suggests it will be today. The confusing part is the March 11th heading - but I think that is just the date of the dev blog that week (i.e. the Thursday)

EDIT: More confusingly, in last week’s blog they didn’t include the picture, just the web friendly version which lists the same things under March 11th, but without the (03/09) in brackets:

Maybe especially given the dev Q&A is tomorrow (10th)

This is the update where Asobo have started releasing advance copies of the patch to their partners prior to a public launch. I would assume with their close relationship with the WT team, they’ve had said advanced copy. If so, that will mean the WT will have compatible updates for their mods posted shortly after launch of the update.

Unless, of course, everything in the current WT mod has been implemented in the base sim.
But maybe not very likely…

Originally, the WT team were very forthcoming with their future plans for the Garmins on their Discord. They shared the state of their re-written FMS / nav system they incorporated into the CJ4, and were quite adamant that this system would soon find its way into the G1000/3000 and G3X.

That’s somewhat changed since about December. In the past couple of months, there’s been a lot of “there are big changes coming, but we can’t talk about it” (I’m completely paraphrasing here) when people ask about the future of their Gamin mods. They’ve been somewhat open about the G3000 which has had several feature updates over the past several months, but they’re saying nothing about the G1000. When asking about the state of the G10000, the standard answer is the single dev working on it is “tied up with other commitments”.

I’m REALLY hoping Asobo contracted out the Garmin work to the WT team - particularly their complete re-write of the nav system. It’s pure speculation on my part, of course, but seeing their close relationship with Asobo, I would certainly consider this to be in the realm of possibility. And it would explain the absence of their G1000 guy since December, as well as their NDA-style replies to questions about their mod.

One can hope, right?

I’m hoping so, although not counting on it.

However, I’m still convinced that the WT team will have updated versions of their mods compatible with the new release at launch or shortly thereafter for the reason I stated above.

Some weeks ago I asked to the WT (on this forum itself) what the plans were about this and they replied that there is no collaboration between Asobo and them, and they were just working on their Garmin.

And it looks like I was wrong in my hunch. Seems like they only have minor updates to the Garmins this time around. At least from the patch notes. We’ll see how it is when I get home from work and can actually try it out myself.

Been looking forward to this update for some time. I’m going to uninstall the WT mod at first and see fi anything was actually done on the default G3000. I’m
prepared to be disappointed.

You will be. All the old problems are still there.

The Mod does NOT work with this update

Yes it no longer works

Unrelated, but did your install have the wrong release notes…

Had to remove all my TBM and G3000 mods just to a TBM I could see and a poor G3000. One of the TBM mods did get updated, but I still have lost most of the functions on the control panel.