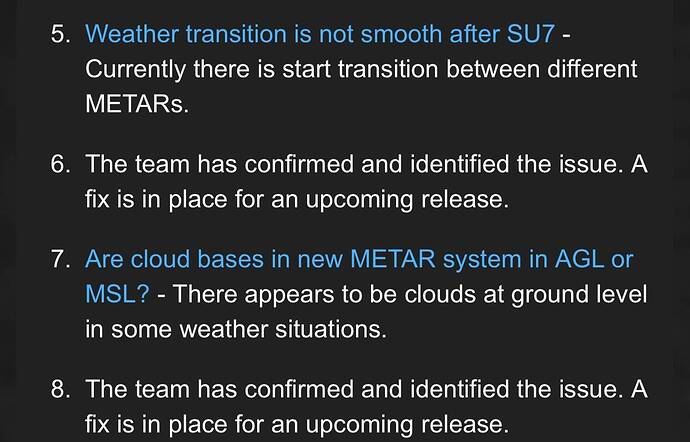 You beat me to it. Just reading it. Wonderful news for us all.
Too bad there’s no info about the borked temperatures and winds aloft. But I guess that can be solved by a server side fix.
Now we wait.

And I see there’s chance to opt into a beta soon - this mentions fixes to VR along with several others, I wonder if weather is included in this

I believe so, certainly thinking about joining in.
Oh, I can’t… I own the Steam version. Well I’ll leave it to you guys on Windows Store and Xbox then

I just encountered the high temps at altitude

That was a wild ride!!!
It must be a data implementation issue or corrupt data making its way into the sim. OAT was going between -22C (normal) and +250C once every second or even less, bang bang bang bang.

Exactly. I had to divert to another aiport because my poor passengers were taking G loads of almost 3 Gs. Puke bags were necessary :).
It’s most definitely corrupted data like you say… we’ve encountered those issues in the past as well.

I’ve descended to FL240 as all is ok at the moment. I’m going to finish my flight, about 30 mins to go, then park it up and give MSFS a break until they can get this sorted.

I understand. I’ve switched to shorter flights so I don’t get higher than FL240.
Or bush flying.

Silly me for not keeping up with the latest issues. Climbing past FL300 in the FBW, wing view on, enjoying the scenery. Routed myself around last weekend specifically so I could take this flight.

All of a sudden, I start hearing flight attendant call sounds. Switch to the cockpit - dual engine failure, plane below FL250 and descending, fuel almost gone. Add more fuel, manage to get the engines started again, and continue on. Have a few more altitude swings the rest of the way.

Looked at the flight data after the fact, and my fuel quantity and altitude both plummeted as I was passing through FL350.

Thought it was the FBW dev version, but I’ve been around long enough that I should have immediately realized Asobo done broke the weather again…

Here is your chance to improve things.

Just experienced for the first time how the fog disappears in the simulator. It is not a flowing transition but it dissolves every second in individual steps.

I’m not a beta tester, I’m too busy to do that. I have a full time job and kids to feed. In my spare time I’d just like to have MSFS to use, and have all its main features and functions working.

Is it really that much to ask? For the weather to work?

The sim has been out for over a year!

The same in my flight from EDDL to LGIR. It was not possible to climb above FL240 because there are wind up to 270 kts. Last but not least the aircrafts crashed. Please open the SDK for third party software to avoid situations like this, because it seems that Asobo can´t fix the weatherproblems since over one year

is this a joke?

It would be really nice for them to revert weather back to update 6 and divert the current weather “enhancements” for the public beta branch.

I would like that too but i think not everyone wants that. Many wanted to have METAR based weather. And maybe are happy now. Would be nice to have the option to choose though. It feels like we are all forced now to need to use METAR based weather now. I have got used to the meteoblue weather now and know how to plan my flights with that type of weather. I think the weather we had was the most realistic weather we ever have had in a flightsim before. It never looked the same.

Yes, options would be nice. Otherwise we all have to use metar based weather whether we like it or not.

Exactly, i had the option before to choose METAR based weather using rex but i never liked it and never used it. I know it was custom weather in use but it’s the same thing i would say. METAR is local reports stretched out to be global reports of the weather. The only difference is how they choose to stretch it out.

I tried rex and I didn’t like it at all. The sky looked like I was playing fsx. I totally missed large weather systems and cloud bands.