Something wrong with Atlanta, GA?

Can anyone else reproduce this? If I fly in Cessna Citation Longitude from KATL and head north fly to over Atlanta - FPS keeps dropping really bad to single single digits and never improves even as you move away from Atalanta Downtown / PG area. I tried lowering all graphic settings and get the same issue with this combo. I also notice that when in Cessna Citation and flying closer to and over Atlanta Downtown area, my GPU % drops from 85% to 10-15% and never regains /improves even as I fly away from this area. There are other areas where I experience same ‘bug’ in Cessna Citation but Atlanta area seems to be reproducible to me each time I try it over the last week. My specs: CPU i7-6700K, GPU 5700XT, 32GB RAM. M.2 Drive. 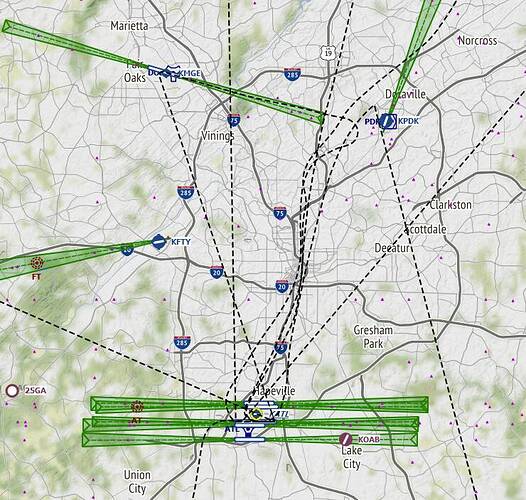 Yeah I had issues with KATL pre and post ‘performance hotfix’ regardless of what i’m flying.
So I’m pretty confident it’s something with the photogrammetry or other scenery there. Frames tank no matter what i’m flying.
Zendesk it , more likely they’ll look at it.

Found that KPDK is another fps black hole a while back. You can give it a try with any aircraft and see if you can reproduce.

I could see the volume of trees hurting performance around Atlanta on some systems.

There is something very strange about KATL I haven’t figured out. I have a flight plan IFR KORD to KATL that I’ve been using with the TBM 930 as a test flight. Prior to the last update, I found a memory leak when I arrived in KATL airspace driving down the frame rate to about 2 FPS. I opened a ticket with Zendesk giving them all the info. Unfortunately my ticket was classified as “Performance” and closed by Zendesk. A memory leak isn’t a performance problem. It is a code problem.

After the update I flew the same test flight. The performance was better before reaching KATL which is good. However, when I arrived in KATL airspace the FPS cratered just like before. The update didn’t fix my problem with KATL.

I saved a .flt file at this point where 2 FPS was occurring in order to recreate the problem. I exited the flight and MSFS. I returned the next day to continue testing. I loaded the .flt file starting the flight where I was having 2 FPS. When I resumed the flight, the FPS was normal, not at 2 FPS. The TBM 930 flew the remainder of the flight including the ILS approach into KATL. Okay…

I decided to re-fly the original test flight plan from KORD to KATL. When I arrived in KATL airspace, the FPS cratered again to 2 FPS. I was at the same exact place where I was about 3 hours earlier when the frame rate was “normal”.

This does not make sense. Two times flying the test flight had the same results, 2 FPS arriving near KATL. One test flight starting near KATL finishing the same flight from earlier and had no FPS problems. There were no MSFS changes made, no driver updates, and no add-ons added between these three flights. The ONLY difference is that one flight is resumed. Why does resuming the flight make a difference? But it does…

Since the last update, there have been posts stating that the “performance problem” hasn’t been fixed and other posts reporting performance improvements.

The challenge is showing Asobo that there still is a major problem that was not fixed in the last update.

Agree… just tested it with C152, all communications off. On approach 16 miles from the east I started out with a 14.8 Fps with very little or no scenery below… I’m used to about 18 with forest like that. Then after a while, Fps dropped very low, at ca 8 miles it reported the 10 Fps bottom. But it got worse. I had to use my old FS-3 skills to land safely. The SDK-meter still said 10.0 Fps, but I suspect it was around 5Fps. Worse than London City ! Agree memory could be an issue somehow. I see it eating about 4.8Gb of memory.

Maybe it tries to load too much scenery ? Maybe the minmax latitude-longitude range of handcrafted BGL-scenery in Atlanta is set too wide ? The airport is far from the city, but for me the frame rate felt like you fly directly over the city, at low altitude. I run low spec hardware here. Framerates usually around 18-20.

Btw this is the first international BIG airport above 1000 feet altitude I approached. Horizon…

I flew from KHXD to 2NC0. Horrible when over GA. Not very close to KATL. Fine on both ends of flight though.

ATL has been better for me since the patch than before- so I’m not complaining. But, something is definitely resource-intensive in the area.

I have the same issue in the Detroit and Boston metro areas - anyone else? London and Miami are fine for me.

The main problem is zendesk classifying the issue as closed. Once they start doing that, that is where the frustration starts building on the forums. How many times do people pop into threads like this and demand that a zendesk ticket be submitted? They feel all good about themselves. Then, Bang! Ticket closed as resolved.

No ticket should ever be closed until the originator acknowledges issue resolved or a lengthy time limit is met.

Yup.
It is spelled, Atlanta.

You can fix that by editing your title the same way you edited your post.

That wasa typo - I fixed it. Now can MS/Asobo fix Atlanta?

I could see the volume of trees hurting performance around Atlanta on some systems.

Don’t suggest that. They’ll just reduce the tree LOD and draw distance to try to fix it.

I got bad juju from ATL almost day one, in a Cub even. I steer clear of it

Shame too, beautiful skyline(s) and the Appalachians rising in the distance

No ticket should ever be closed until the originator acknowledges issue resolved or a lengthy time limit is met.

I’ve already had this discussion with Zendesk without success. Their user support processes are “different” and lack customer/user focus. Maybe this should be a “wishlist” item.

It’s still terrible.Its the type of trees they used that is causing the issue.Reducing isn’t going to really fix it.They need to change them to more performance friendlier trees.
My performance is good everywhere else.
Specs i7 10700k
2060super
32gb
Ah I forgot to update to the latest version it’s smoother now but the fps still dips over trees.
Update its still bad.Agreed avoid until its fixed!