Hi all, I was experiencing some noise on the rudder axis of my Thrustmaster Sidestick Airbus Edition. After a suggestion in this thread: Rudder has a mind of its own I opened up the stick (very easy to do), and found indeed that the wiring is pressing on the sensor. I just took the wires and pushed them to the other side of the screw hole (see circle in the picture). That fixed the issue entirely. Just wanted to share this as this might help others as well! 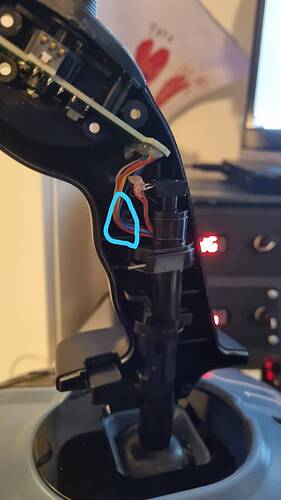 image899×1599 72.3 KB
12 Likes
TCA Airbus Joystick - rudder sensivity issue
Replacing the Jittery Potentiometers on my Thrustmaster Joystick
Your opinion on thrustmaster airbus side stick
THRUSTMASTER AIRBUS yoke
[BUG LOGGED] TCA Quadrant & AddOn problem with SU5
Rudder “Twitch” - All planes
Problem with Thrustmaster Airbus Joystick
A32nx Flight into Quito
Minor Ghost inputs
Your opinion on thrustmaster airbus side stick
Can anybody tell me, why its not possible for me to start engine 1 on the A320. Not by hardware and not by clicking
BashirDS9 July 5, 2021, 11:05pm #2

My rudder axis is so bad I have disabled it on the Thrustmaster and I use a Logitech joystick just for rudder, I will give this a try, thanks

Bookmarked!! I’ll give this a try too. Thanks.

So far I’ve been doing some shaking and do a full Rudder movement to get it stable, but if this is more permanent, then it’s worth doing.

Do you have an approximate size of how big the hex key is required to undo the two hex bolts that are holding the plate under the hat switch? I have tools to remove everything else but none of the multiple hex bolt sets I have come even close to those tiny ones. I believe I need to undo those in order to get at the interior of the stick as you’ve shown.

No hex screws. Only Phillips screwdrivers (and not even the smallest ones).
It took me less than 10min to reroute the cables.

The difficult part was to get the rod for the trigger pushed out.

When you are disassembling your T16000M it might be worth cutting the cable at the base as well which causes this stupid illumination each time you move the stick.

I used the screwdriver/bar that was used to lock the left-right throttle quadrant.

It’s a hex screw atop my Thrustmaster Airbus. 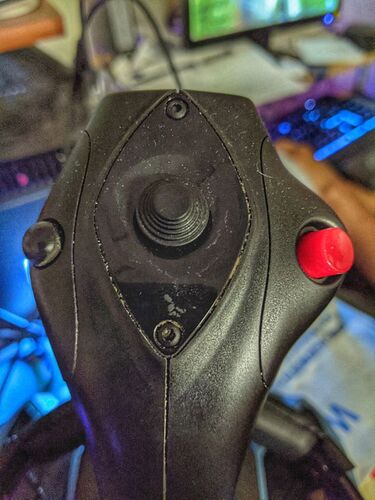 Sorry, my mistake. But I don’t think that you have to remove the top part.
At least I didn’t have to on my T16000M.

You unscrewed these 7 screws, and the side cover should come off. The top hex screws doesn’t need to be unscrewed.

Did it have a good result for you as well? Just asking out of curiosity and for others reading this thread.

No that one doesn’t need to be removed.

I have the impression that the cable routing has been changed with the later models.

I never had rudder problems with my old T16000M, but the newer one started with tiny uncommanded rudder deflections a few weeks ago.
The above fix fully cured the problem and my deadzone is back at 2% instead of 5%.

And 2 more screws inside the autopilot disengage button.

It was those last two that I missed during my previous disassembly attempts.

I re-routed my cables as per OP’s photo - much better. hardly any twinge now in the USB Controllers diagnostic check screen and happier flying.

Just a word of caution - gently pull on those wires - not sure if there’s really a lot of slack, and there might be assembly inconsistencies. I was a little anxious pulling on them to get it around the screw hole.

Thanks for the share, sorted out my problem. No more twitching rudder.

Just an update to this thread; since I moved the wires, things were great, but the last few flights this week were awful, things were squirrelly on taxi and T/O. On the external view, I noticed the rudder was again pointing left when I wasn’t even touching the stick.

Hopped into Options-Controls and sure enough, the white bar showing current rudder position was once again dancing on its own. It actually was stuck in the full left deflection. Every so often, if I cycled it full right, it freed itself but ended up unstable near center.

Popped the stick open and checked the wire movement. As I suspected, the wires on my build are probably not long enough to be stretched over that screw position for the long-term. I also saw some pinching marks on at least one of the wires in the bundle.

I moved it back behind the screw position and pushed it all the way past the other wire bundle that’s connected to the rudder potentiometer itself. I suspect over time since I made the first fix, that longer bundle is binding the potentiometer assembly from mechanically returning to center position. A quick check in the TM utilities before jumping back into the sim showed proper center response, although it still once in a while is stuck on full left but a quick twist returns to center properly.

Bottom-line: this fix may not work for everyone, so be prepared to pop open the stick and revert if you must. Overall, I would say if you’re thinking about a new joystick, look around and see who’s on the market that might have a Hall Effect sensor for the rudder axis as well. That might alleviate the problem that the TM Legacy design has.

I found myself as well that after a while, the wires started to push to the rotation sensor again, reintroducing the noise. I made a better fix now (I hope) by using a little tape around the wires going to the top part of the joystick (just were they originate from the central axis, and first pulling them a bit out of it to get them a bit longer), and using a piece of sponge to keep them pushed away from the sensor. Hopefully that will keep it working fine.

After still getting new noise issues, I found this thread. For me, removing a bit of the material that is pushing on top of the potentiometer is so far succesful (this is issue number one in this thread linked here): https://www.reddit.com/r/hotas/comments/am2otd/thrustmaster_t16000_potentiometer_issues_look/

Seems to be quite some issues with these joysticks!

Edit: in the end this also didn’t work…

Did anyone ever come to a reliable ongoing solution for this problem?

I returned my Thrustmaster to the shop today. I really liked it, however the rudder was hopeless, and re-routing the wires didn’t work for me.

Alternatively… are there some suggestions for another joystick?

I bought 2 Thrustmaster sidesticks, both had the same issue. Returned the last one to the shop and ordered the VKB Gladiator Nxt. You just feel the difference in quality. So much better!

Did anyone ever come to a reliable ongoing solution for this problem?