None of these are real solutions, but workarounds.

I wonder when Asobo will finally get rid of this terrible bug.
It’s almost 6 weeks …

I call it a solution because it’s a mod. I’m installing a modification to their program to suit my wishes. I wish for no toolbar handle and whether it’s an installed mod or an edited file, I get my wish.

Surprised how so few people seem to care about this bug. AFAIK it affects everyone. I see the toolbar arrow in almost every screenshot posted here and on the subreddit. I doubt it will be fixed in WU6 because it’s clearly not a priority for the devs. It might even be a feature that it doesn’t hide anymore…

Most of us fixed this the day the sim released this feature.

I still have this bug after the latest update. It drives me nutz

Just install the mod to remove it completely. It’s tiny, and you don’t have to worry about not moving your mouse for a few seconds before you take your screenshot. And you can still access the toolbar by moving your mouse to the top-center of the screen like always.

Really ruining my screenshots >:(
Not fixed?!? Really?
No options to disable?

Can’t remember who posted this but it works with SU5.

the procedure should work like that as before SU:5

The entire “Community” doesn’t want that, because I’m part of the community and I don’t want that. I don’t ever want the toolbar handle to show up because it spoils screenshots and I don’t want to wait for it to fade while my screenshot framing goes away. Just because one person wants something doesn’t mean that everyone wants it.

Confirmed, toolbar handle still won’t go away in 1.19.9. It’s been something expected tho, as was not listed on the list of bugs to be fixed with the latest hotfix.

We’ll be waiting for the next SU to fix it, hopefully and revert back to what it was like prior to the apocalyptic SU:5.

My hangar still fails to show user-controlled external view option for airliners, which was also introduced with SU:5 and has yet survived up until now.

Toolbar handle arrow is, in my opinion, something pretty chic for as long you intend to use the toolbar functions and you interact with them.

The thing is that it should definitely fade away and totally disappear while the toolbar is not in use, just like before the terrific SU:5.

The handle irritated me from day one. I’d frame my screenshot in flight, then slide the mouse off-screen and wait while my perfectly framed shot flew away before it would fade. When someone posted a Google Drive upload here that removed it, I installed that and haven’t looked back. I know that moving the mouse to the top of the screen activates the tools, so I don’t need a constant reminder - whether it fades in minutes or seconds.

Still not fixed. Come on Asobo, surely they notice this when play-testing? 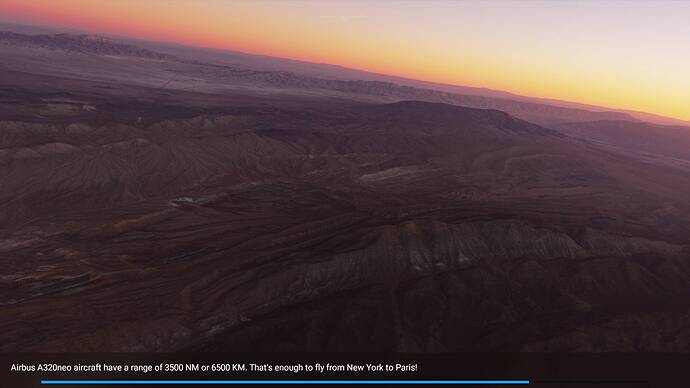 Wow. How does that even happen?!?

I watched the latest (frankly unbelievable given the LOD popping issues that I and many others see) trailer from Asobo, and I thought I saw it there even. Although that is possibly paranoia! Surely they must know the issue given the time it must take to very carefully put these trailers together? Has their marketing team seen this and fed back to the developers even if their QA team isn’t up to the job (by being overloaded?)