We have been having a blast doing cargo runs between CYTS and the James Bay coastal communities in the Kodiak. By far, the most “complete” aircraft I’ve flown in MSFS and the most fun.

Packed up the manuals and with the last flight down to CYAM to pick up the Twin Otter after some maintenance and a new paint job we hit the 53 hours. 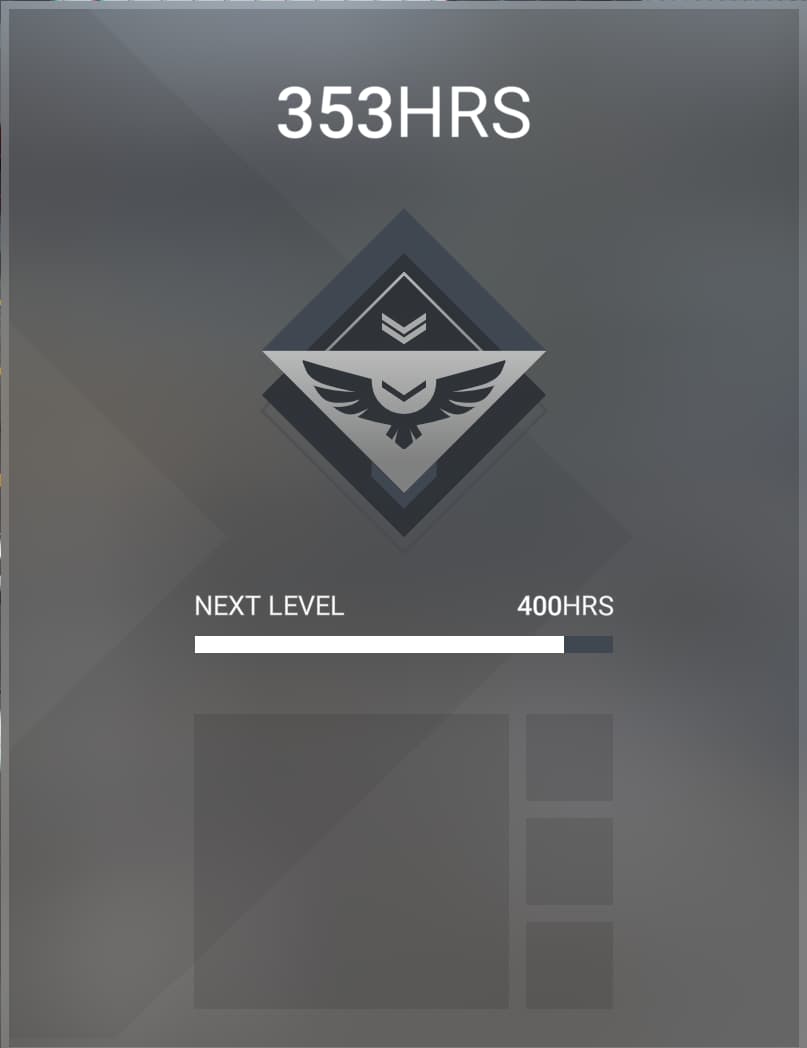 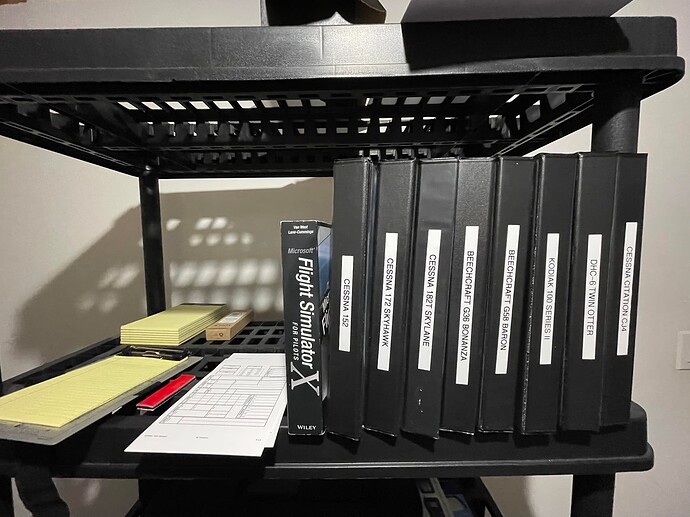 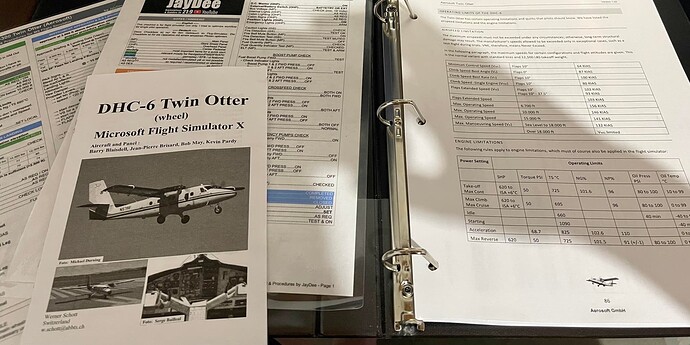 Parked the Kodiak, finished up some paperwork and a little while later the ground crew got the Twin Otter out of the hangar for us.

It’s been awhile since I’ve flown Steam gauges and the GNS530/430 but it didn’t take to long to get acquainted with the cockpit. Got our clearances and after a lengthy checklist everything was fired up and running as expected.

Departure and climb out went great as well as the cruise but things fell off the rails a little when it came to the approach.

ATC told me to expect vectors for an RNAV approach and while I was programming that into the GNS530 I could not find the vector option (like in the G1000 I’ve grown accustom to). I only had the transitions available, not the option to select vector. With already poor weather turning worse I worked with what I had and hand flew the vectors and approach.

The runway came into view before minimums and I was able to safely set it down.

Shutdown checklist complete, but just before turning off the power I went back through the 530 and found the option I was looking for. I had grown use to being able to select vectors when configuring the approach procedure in the G1000 and then just activating vectors to final.

I then remembered in the GNS530 you select your approach procedure, choose the approach and then back in the main procedure menu, activate vectors to final.

I’ll be all set for the next flight!

Nice writeup! I’ve got the Twin Otter, but (ashamed) I haven’t flown 'er yet.

I had purchased it awhile ago but tonight was the first flight.

Also own the CRJ, PMDG737, Fenix A320 but will be quite awhile before I work up to those

I’m so bad… I’m still waiting to find time to give love to the DC-6! (let alone the swarm of other planes I have that I don’t fly).

These days my MSFS time is pretty limited, so I usually just hop in the BN-2 Islander and do an hour, hour and a half flight. Weekend mornings if I get up before the Colonel I can usually squeeze in a round trip

It took a few flights to get the hang of the Twin Otter but now that I have pretty much everything sorted out I am having a blast flying it. Even more so, I’m having a blast starting it. Absolutely love the sounds of those Turbo Props firing up!

The range isn’t as good as the Kodiak and with these remote locations (many of which do not have fuel) combined with heavy cargo loads, it has been a logistical juggling act both with in fuel flight management as well as routing.

Have had to move fuel around and make use of the wing tip tanks on several occasions.

Lining up on 32 @ CYMO followed by departure.

Picked up a bit of icing coming through the clouds, love how it’s modeled.

The DeBeers Victor Diamond Mine, I’ll be flying into there shortly!

Beautiful clouds coming into CYMO, ignore the all the cation lights, the main tanks were drained and shut off, running on the wing tip tanks to get into CYMO for refueling before making the way back down to CYTS.

Approach back into CYTS.

The next adventure was up to CVM2, the DeBeers Victor Diamond Mine.

The Victor Mine was the first diamond mine in Ontario and the second in Canada officially opening July 26th of 2008.

Prior to opening, I spent most of 2007 onsite preparing the IT infrastructure for several of the main contractors. The runway was a single gravel strip and Air Creebec held the charter with it’s Dash 8’s.

The Aurora Borealis were some of the most spectacular I have ever seen and the food was always out of this world (as is with most remote camps, or people simply wont work there).

Since the mind is now closed, we headed up with an empty cargo hold and picked up a load for one of the contractors who still had gear onsite.

Once you land, there is no terminal, just an ATCO trailer to come in and out of before getting on the bus to head into camp.

The camp was dry (no alcohol or drugs) and when I first started going up as you got off the plane you had to take a marble out of a bucket. If it was a blue marble, you passed through, if it was red, you had to go into search.

Guys wised up to this pretty quickly and everyone would put a blue marble in their sleeve and let it drop down into their hand. Magically, everyone started drawing blue marbles.

Needless to say the screening process was quickly changed.

The living quarters were actually pretty comfy, they were rows and rows of ATCO trailers, each one had Air Conditioning and every room had a single bed, desk, dresser, closet and a TV (satellite).

There was a gym, volleyball courts, social areas, etc…

We got loaded up and started making our way back down through the sunset to CYTS but not without one last look into the pit!

Great story. How about a flight plan to find that spot?

The flight plan is pretty basic,

If you do want a fix inbetween

There is no fuel at CVM2 so plan accordingly (closest fuel is CYMO) if you can’t take enough on board to get back down to CYTS.

Lastly CVM2 is a gravel strip.

The cargo runs have been rolling steadily the past week between CYTS and the coast, getting the hours up before the next progression in our flight journey.

Storm rolling into CYMO after unloading.

Followed up by sunset showers into CYTS.

We had a bit of downtime, so took the 152 out of the hangar and did some flying with @RedBaronYYC

After a number of runs it was time to head back down to CYAM for general maintenance on our old DHC6.

Landed in CYAM that night and spent the next day touring around while the plane was in the shop.

The next evening she was ready to go and we headed for home, but first a quick stop in CYYB to meet up with @RedBaronYYC

Ships in the St. Mary’s river.

After the constant rainy / cloudy days, we finally had a clear night of flying.

In this photo you can see two smoke stacks, one shorter one and one that looks incredibly tall, because it is.

The Superstack is 381 meters (1,250 ft) and is the tallest chimney in Canada, as well as the Western hemisphere. It is the second tallest freestanding chimney in the world next to GRES-2 Power Station in Kazakhstan.

In short, the idea behind the stack was to get the waste gasses higher into the air to be blown out of the city as they were causing severe ecological damage.

The stack has since been decommissioned.

For more information, check out the Wiki; The next few days were filled with cargo ops going into;

I love the powerlines add-on!

Nice approach over the Moose calm Moose river with the Hudson Bay in view.

Birds kicking up as we approach the taxiway.

That was the last run of the week, but not the last of the flying as we headed back down South for other future work related things.

CJ4 The Next Step World Discovery

As I get closer to finishing out my Cargo contracts for the spring; https://forums.flightsimulator.com/t/kodiak-cargo-ops/515216/12 https://forums.flightsimulator.com/t/twin-otter-cargo-ops/519547/11 I am finalizing my plans for the summer. I have been logging allot of hours, gaining experience and learning everything I can in preparation of the end goal which is to fly commercially with the Air Canada logo. At the end of a busy week I pulled the Baron out of the Hangar and headed to Souther…

I love your reports! The Twin Otter is such a cool little workhorse.

I appreciate your feedback.

Last week Timmins hosted the Annual Canadian Mining Expo (CME) and the Twin Otter was hired to move some gear from the expo back to Marathon (CYSP).

I forgot how hilly the region gets starting in Wawa and continuing through Marathon.

Haven’t landed at his airport (IRL) since I was a kid.

I spent a large portion of my early childhood in Marathon before moving away in grade 5 I believe (early 90’s). For a long period of my life into adulthood it was the longest I had ever lived in one spot (7 years).

The town slogan “built on paper, laced with gold” came from the Paper Mill that sat on the shores of Lake Superior, and the gold mines on the outer edges of town.

The mill has since been tore down and now serves as a stock yard for dill pipe. At least it did last year when I took a quick tour on my way back from Kekabeka Falls and the Sleeping Giant Provincial park.

This is the bay where the mill use to be (on the left hand side).

And from the Lake Superior side looking in.

The first homestead I remember, 52 Jackson, it was a trailer (first one middle of screen). Right across the street (removed from image) was a woman’s shelter.

The second house was much nicer and in a nicer area (again first house in middle of screen). My bedroom was on the backside (overlooking Lake Superior). I went to sleep and woke up every morning hearing the waves crash.

Probably explains why I had to pee so much.

This is it, the last of the contracted payload heading up to the Hudson Bay!

Following Porter out of CYTS

Straight in approach along the Moose River

Unloaded and ready for turn around!

Right turn out over the Moose River, headed south to CYTS

Final approach into CYTS for awhile

Parked in the hangar for now but have to keep these birds flying. A local freight company is renting both my Twin Otter and Kodiak to keep the cargo moving in the North!

Most of my things went down to Toronto last week by truck, and the last of my personal belonging are loaded in the Baron in the hangar. Ready to head down to Toronto and start flying the CJ4 for FlightExec.

One step closer to Airliners! 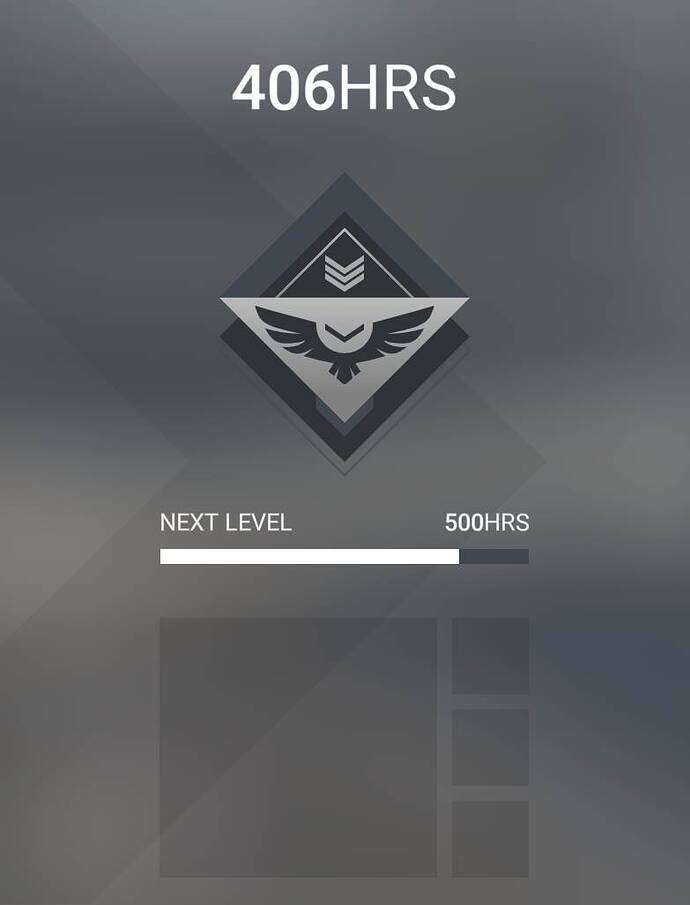