How can a company that big screw up something like that so big?

If an employee doesn’t care… and paste and copy the text of the e.g. (standalone) deluxe edition from MS Store…

I’m a current Game Pass user and I can’t even get the upgrades from the in-game Market Place. They’re visible, but if I try Buy or Buy and Download, I just get a message that it’s failed. No explanation as to why.

You may have your MS store purchases turned off or restricted. It still purchases through the store. I had mine disabled so kids wouldn’t buy a bunch of minecraft ■■■■. I had to re-enable to upgrade.

Ah, thanks - looks like that was off by default. Enabled and will try again later.

In case people were still confused about what they get when opening up their wallets for this game, with or without game pass:

I have gamepass (and no not just for this sim, always been with them since they launched it for PC - there’s some sort of bad stigma around gamepass and that’s people being smart about their finances too so idk what’s wrong with that). 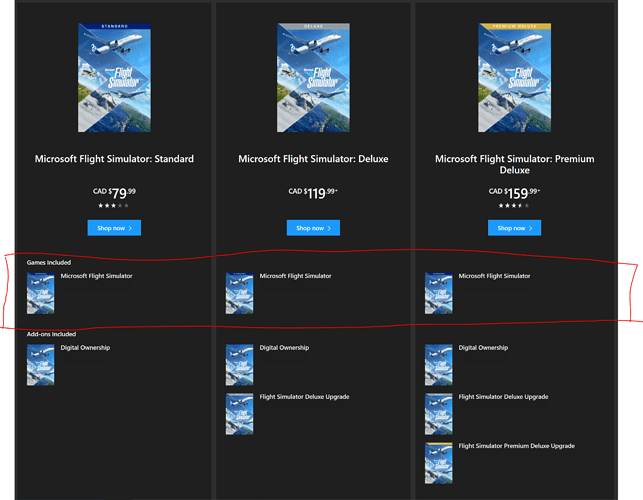 Hmm. It still shows an error when I try and purchase. My settings look okay. Unfortunately, there’s info on why it failed, just that it did.

Hmm not sure then. Zendesk ticket is probably advisable at this point or maybe try the upgrade though gamepass.

thanks for this DA now i know I’m screwed as well -_- bought the Premium Deluxe while i had the gamepass on thinking i get the full game i spend 84 euros on one DLC package Really microsoft?? and now i need to buy the base game too thas 60 euros thas in total 144 euros

got to love microsoft

If you had read the FAQs before you could have known…

„Q: Will I be able to upgrade editions?

A: Yes it is possible, but the most cost-efficient way to purchase Microsoft Flight Simulator is to buy the edition you are interested in.“

Platform and Retail Questions Q: What platforms will Microsoft Flight Simulator be released on? A: Our PC release is on August 18, 2020. We will share more information regarding the Xbox release i...

You could have read it even before release. 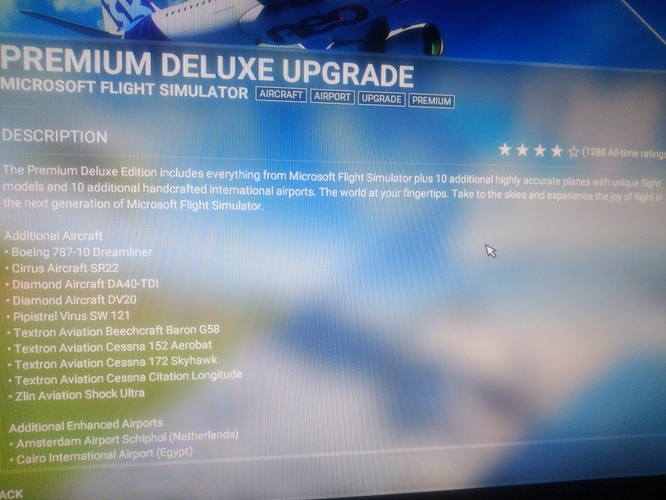 Clearly states you don’t get the base game with the upgrade . How could all the idiots ( including myself ) not have understood this ?

I agree, it’s confusing. But the text is the one copied from the Premium deluxe pack (not the upgrade) As it says: „ the premium deluxe EDITION includes…“
What you choosed ist the UPGRADE as the Name above the text say.
The text is not clear and you can think you get everything, but you can only upgrade something you own. The point is, if you don’t use Gamepass anymore, you don’t have the base game ownership.
You should get a refund from MS and buy the Premium Deluxe Version for 120€

Thank you all for the feedback! I too own XBGP (Xbox Game Pass) and wondered the same. I guess the biggest clue is if you go to the MarketPlace in MSFS, click on “Owned” and nothing shows since I get the game (standard) through XBGP. I think that can confirm the ambiguity because it is ambiguous whether or not the “upgrade” versions include the base digital copy; I think this answers the question.

If you are in the store, it will not allow you to purchase the “Upgrades” and will say they are currently unavailable; I assume because I have the Standard version installed using XBGP.

If i look at mine, which is also a Gamepass version, all of the upgrade versions have a new desscription it seems. So to me, gamepass IS required to play the game if you only buy an upgrade.

“DOES NOT INCLUDE THE MICROSOFT FLIGHT SIMULATOR BASE GAME. This upgrade pack requires a separate purchase of Microsoft Flight Simulator.”

They added this it seems. It wasn’t there when I bought it. I have some pictures also.

When does the game pass discounts start applying to the game? Sep 17th?