Hello all. Like many of us, I was a bit confused upon MSFS’s release on why the weather I was flying through in-game was so different from the usual METAR sources I used during my FSX and (gasp!) X-Plane days. Live weather means REAL weather, right? Wrong. I’ve now learned that my expectations don’t necessarily have to be tempered, but recalibrated. Hopefully this post is illuminating to some, and if I’m wrong, I hope to learn more, too.

First, a disclaimer. I understand there was the wind problem, Live weather simply not loading properly or at all, the visibility problem, “LIVE WEATHER UNUSABLE ON VATSIM”, etc… Those issues have been rehashed so many times already and this thread is not about them. This also does not concern METARs, TAFs, winds aloft forecasts… This is how to use the Meteoblue site as a tool to get an OVERALL IDEA of what will be shown in the sim, and what you can expect.

Words and stuff
To begin, I think most are finally realizing “live” doesn’t mean “real.” At this point, everyone should understand that MSFS ingests MODEL data from Meteoblue and that’s what we see in-sim. It might be spot on, it might be completely wrong, it may be close enough. I think that one word choice by Asobo has caused more confusion than it should’ve, but I’m guilty of it myself. Maybe a better word is Dynamic? Modelled? Asobo-verse? Either way, it isn’t real.

Another word is “precipitation.” We see this word on the map when selecting our departure airport. Click it, and varying shades of blue and green are smeared everywhere. Load in and you expect to see a solid wall of precipitation based precisely on where it was painted on the map.

The Map
I’ve come to the conclusion, even though MSFS doesn’t seem to specify, that what is shown on the map is a precipitation RATE, not a REFLECTIVITY value. This is based upon what you find in the Meteoblue map. Let’s look at some pictures. 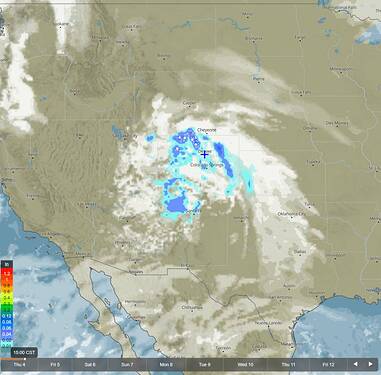 This is from the Meteoblue map of a system over Colorado today. Note the scale on the left hand side of the image. It is showing inches, as in inches per hour. NOT dBZ like radar. This is a forecast. Based on this, one could safely expect to see scattered light precipitation with some heavier snow to the north. Let’s look at the MSFS map. 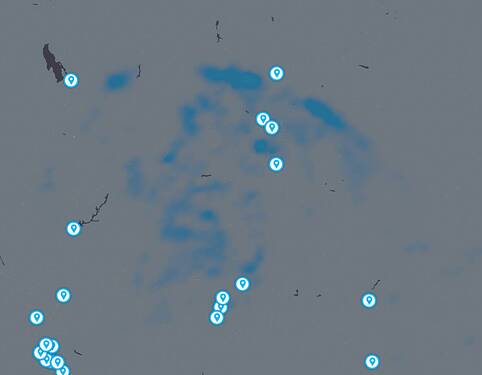 Here, we can see scattered amounts of light precipitation with heavier regions to the north. It certainly looks very similar too, even on such a small scale. I think MSFS smooths out the graphics to make it look nicer. How about clouds?

The cloud cover looks even more similar, in my opinion. Cool. Let’s look at another system on Meteoblue. 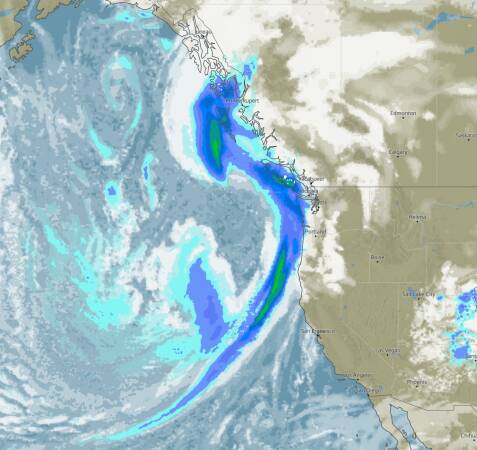 Again, these are precipitation RATES for a given spot over a period of one hour, not a NEXRAD forecast like you’d see on The Weather Channel. Now for MSFS… 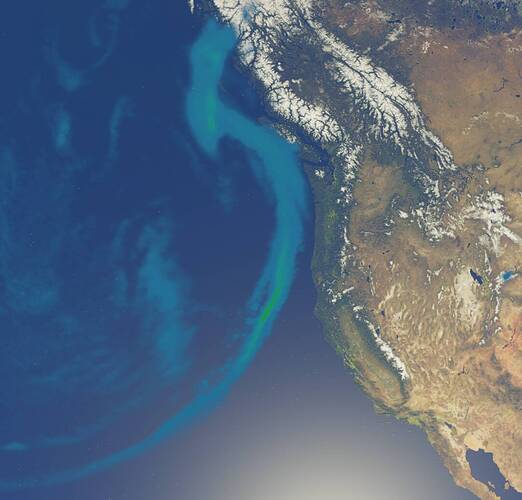 Something you might be noticing is MSFS is more conservative with the shading and it seems like it’s smoothed out much more heavily. However, it’s clearly nearly identical. I won’t upload another picture for the clouds, but it was nearly spot on with Meteoblue, just as the other was.

Let’s focus our attention on the Seattle area. Clicking on the Meteoblue map will give you what they call a Meteogram. Here’s one. 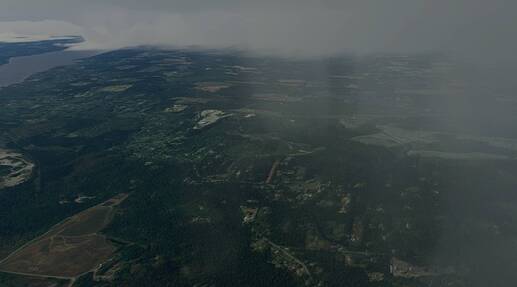 Higher overcast ceilings with some scattered clouds below. With this view looking west, we can even see those lower clouds moving into the area. Just like the Meteogram said.

In closing
Live weather in MSFS is dynamic. It is fluid. It is immersive. It changes, gets in your way, and makes for pretty screenshots. It’s also wrong sometimes. But, that’s okay. Once you can get over the hurdle of trying to figure out why your METAR isn’t matching up, things begin making much more sense.

REX and other METAR injection mods have their place for certain simmers, that’s true. But that isn’t to say the weather system in MSFS is totally broken, it just works differently. Things could be better, though. It’d be great to have a portal for METARs and TAFs as they are in-game. I’d love to have a CONUS Nexrad view of my flight route when planning.

The Meteoblue website can’t give you that for MSFS, but it will give you quite a lot more to work with if you understand what it has to offer.

Great write up, thanks.

I’m really happy with the Meteoblue implementation while also recognizing that it doesn’t accurately reflect all conditions at all times at all locations. The huge gaps and abrupt changes of the metar models are just not satisfying for me, and Meteoblue’s dynamic approximations are a MUCH better solution imho.

You’re absolutely right. It definitely makes for a world that feels more “alive,” which is what Asobo was going for more than “accurate” in this case, I think. If we can score some more in-depth tools in the sim to plan with, that’ll be a massive quality of life boost.

This is fantastic. Thank you for the information.

I wish MSFS would display a bit more information & be more interactive on homepage (like windy.tv).

Windy does have a really good-looking map. I’ve used it before. I think the Meteoblue map is a little bit “rawer” in its format and the way it displays things, but I haven’t sat down to compare the two.

I think the underlying data is probably similar or it’s just windy.tv has better visualization .

This is where MSFS/Asobo could step in to make it more visually appealing and potentially convincing.

But, that’s okay. Once you can get over the hurdle of trying to figure out why your METAR isn’t matching up

Thank you for the taking the time explaining and researching all this!

I’d tend to think if in-sim METAR is matching in-sim weather depiction, it is good at least isn’t it?

Very nice write up indeed! Honestly after getting used to Meteorblue weather and its immersive integration with MSFS, it is very hard to get back to METAR weather based. Sure some will complain that is not always spot on, but hey, this is a new form of technology that we have never seen and I am happy to accept it with its negatives.

But didn’t Seb in one Dev Q&A mentioned that the they use the METAR data on the ground and it blends with Meteorblue data?

I don’t remember reading that. I suppose it depends how heavily it blends that data, and at what point in time that information is taken into consideration when the model is generated. I’ll see if I can’t find that, let me know if you come across it. That’s interesting for sure.

Now that you’re saying this rings a bell indeed.

Yeah I am pretty sure he said, I think the second one or the third dev Q&A. The question is at least for me now, how it blends, this until is not clear though

The main issue that I have with weather, and it’s not related to Meteoblue is, I want to be able to practice cross-wind landings.

I think some, even default, airports have reversed wind socks.

I’d like to know how to know what the winds are in MSFS at any given location to check this.

We need better tools in-sim to get specific information like that. That’s a bit further than what you’ll get from the Meteoblue site, especially since MSFS is doing its own simulation for wind interacting with the terrain. You can always make a custom weather preset and tailor the winds for whatever you’d like.

I think some, even default, airports have reversed wind socks.

Yep, I know. You’d think, however, that Asobo would have at least gotten their airports correct. Not too hard to do a simple find and replace on all windsock objects and recompile.

It’s one thing for community airports to have this, but default?

It’s not across the board, but, I’ve landed at default airports, and been blown into the windsock. Very confusing.

Not too hard to do a simple find and replace on all windsock objects and recompile.

Or even just at runtime!

When the weather works, it works great as far as I’m concerned. If I want to be a real stickler about it and compare it to MeteoBlue or METARs, typically temperatures, wind and pressure are correct. Cloud cover and precipitation can lag behind the real world anywhere from a few minutes to a couple of hours. That’s the biggest inaccuracy with the weather IMHO.

Now, the weather reports we get from ATIS are “screen door on a submarine” levels of useless. Outside of pressure and winds, the rest of the ATIS report is out to lunch. If they could at least fix that to make it match actual conditions and make ATIS useful, I’d be happy with the weather.