During today’s live developer Q&A, Sebastian mentioned they are interested in feedback on what you would like to see in an ideal replay system for MSFS (which they are currently working on). As there are other topics that discuss 3rd party replay add-ons, please limit this topic to what your biggest requests are for the built-in version that is in the works.

For me, I would like to see a saved status of as many items as possible. Gear, flaps, speedbrakes / spoilers, thrust reversers, landing lights, etc. So these are reflected in the replay.

Also, when saving the aircraft state for re-flying, it is important to remember how the avionics were set up. Especially for replaying and practicing instrument approaches. Example, if you are in HDG mode with APR mode armed, 3,000’ set on the altitude pre-selector, ILS tuned in NAV1, it should all be set that way when you reload the flight.

And perhaps easier methods for setting up a tower / fly-by view.

In the last Q&A Seb asked about ideas about what you would like to do, or what possibilities you would like to see added when the complete state of the aircraft can be saved (and shared, to touch on the shared cockpit) and loaded at any time.

Maybe in an attempt to be a little bit constructive…

I was thinking about:

I just like the idea of getting in ‘my’ plane right where I left it, and in the same state that it was when I left it.
And to be able to fly somewhere together and that your planes are saved at that location to continue another day…

What are your ideas?

Just my opinion, but there’s no need to reinvent the wheel. FSX’s replay would be great for a 1.0 replay system. And the ability to save and load states would be great and fall inline with features FS has historically had in past versions.

Great topic to get started based on the Q & A.

ditto for me. That would be just another thing for them to clean up.

built in replay feature would be good but there are already 3rd party freeware programs that can give you that. The only thing MSFS lacks that it needs to have is the fly-by view.
Why it was released without that essential aspect I cannot fathom. Why is it that with all the camera views and drones and whatnot - you cannot have a simple fly-by with one touch of a button?
Especially - and not to belabor the point - when what MSFS is, if we’re being honest, is more eye candy than flight simulation. The biggest piece of that candy is watching the amazingly rendered aeroplane sail past a fixed camera position with all that beautiful landscaping, lighting and atmosphere in the background.
WHY is it missing STILL?

I think something like XP replay function is very good. Simple and intuitive that I think could go well with both Console and PC versions. To summarize it:

An example photo from X-Plane: 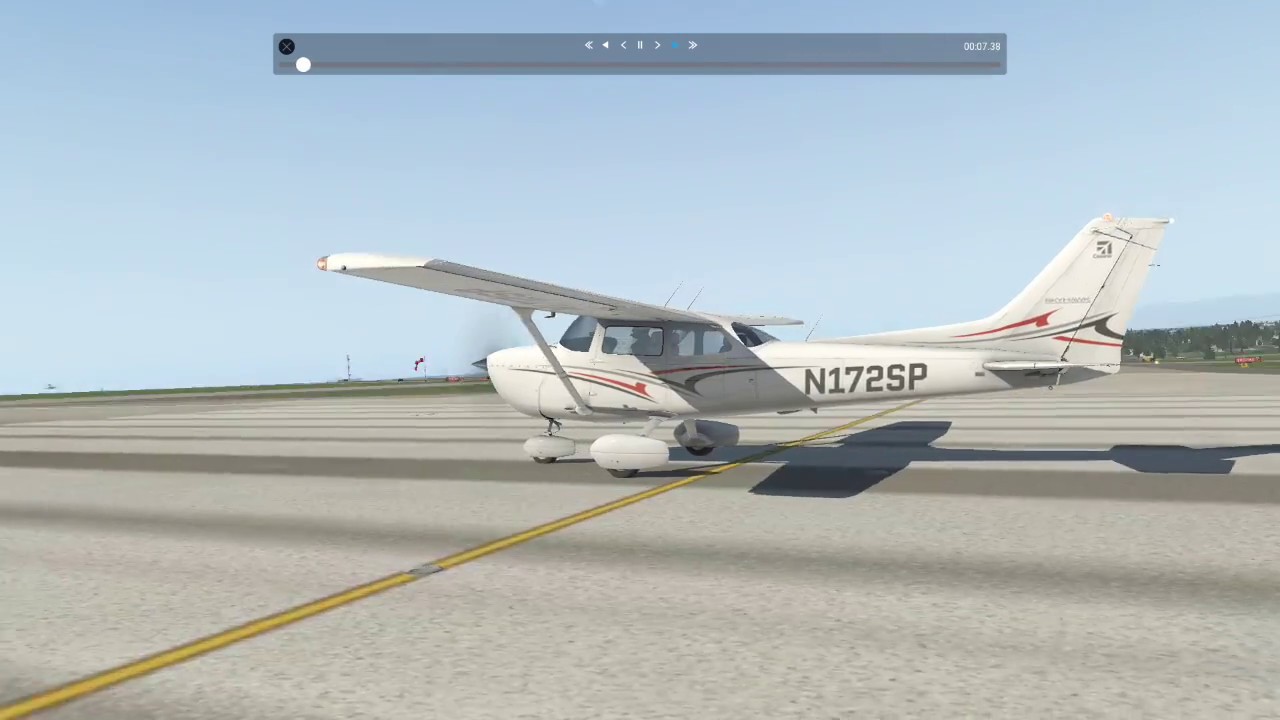 First and foremost, I hope Asobo can release a basic version of the replay first so we don’t have to wait forever foe the full version of it. I just want rewind, stop, fast forward, slow motion, pause. and play like any replay tool. I want to be able to view the plane from different positions such as window, etc.

Viewing the plane from the ATC tower would also be nice. And if possible, a view from the runway too.

Beyond that, for version 2 of the replay, saving the state of the plane so the player can jump in and practice a landing over and over again would be nice.

But version 1 first please. We want a basic replay first. I don’t want to install 3rd party replays, I want a proper basic replay from Asobo.

I think the biggest challenge here is the save state of the flight. Since we have a lot of different aircraft having multiple different instruments. How can we make sure that the save state format is compatible across all the current and future aircrafts that allows both to be saved, and loaded and make sure everything is exactly the same as when you left it. Does this include time of day, does this include weather, etc,

Saving a Cessna 152 flight with a simple instruments, is a lot different than saving an A320 with complex avionics. And then we have third party addons where even looking at A32NX mod they introduce a lot more features into the underlying aircraft codes, that these also need to be taken into account when saving the state of the flight.

I agree. Just keep it simple, and lose the fancy camera and distorted, fish-eye, effect.

It is going to most likely similar issues to P3D and FSX replay whereby the basic simvars being recorded but the custom ones won’t be. The disadvantage with that, it will show missing features for example like custom thorttle (in the case of FBW experimental).

I seem to remember Hy saying he basically wrote his replay system in about a day !!

It records, plays back, pauses, has a Time line scroll, saves the data and can reload saved data. Also has a Data Export. etc etc

Is it really that complex for Asobo to release at least something that has those basic features. ?

Well a basic replay system is not big deal, just record simvars and play them as most of these third party plugins. I think the challenge for them is the user experience, how the flow will happen … etc. My gut feeling is that, they are still debating this internally, I hope they will see this thread for more ideas.

Maybe – I use Hy’s record & Replay system, and find it more than adequate.

One really nice feature of Hy’s replay system, ( and all the things that he produces,) is that he is open to suggestions, and If you suggest something he likes, it’s not long before he has incorporated it.

The guy is amazing !!

Which one is Hy’s record & Replay system? 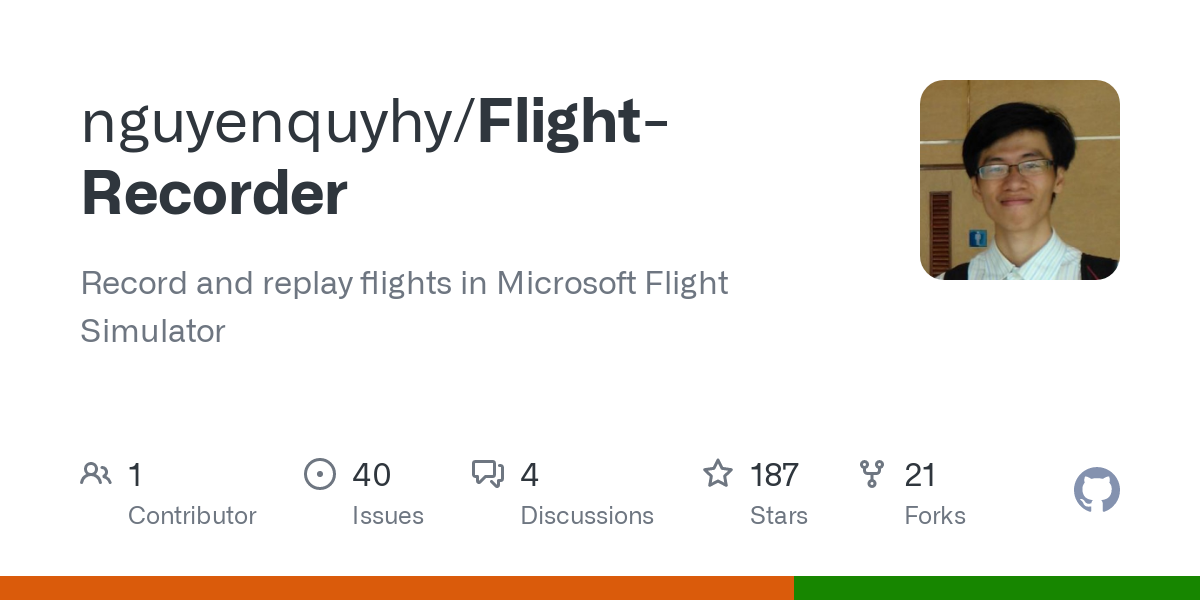 Record and replay flights in MSFS. Contribute to nguyenquyhy/Flight-Recorder development by creating an account on GitHub.

Oh that yeah I am using that as well

I seem to remember Hy saying he basically wrote his replay system in about a day !!

It records, plays back, pauses, has a Time line scroll, saves the data and can reload saved data. Also has a Data Export. etc etc

Is it really that complex for Asobo to release at least something that has those basic features. ?

Yes, we want a basic version first. Just get the basic version out as soon as possible. I understand Asobo needs to think of the design of the replay system and the features for a more complex replay system (ie. loading a flight from replay and flying it from that location).

So maybe take the next month to think of the design and features for version 2 of the more complex replay system. But we want version 1 of the replay system with the basic functionality first. So hopefully they can start work to finalize the basic version of it after they spend a month thinking of the design of it (the basic replay is already supposed to be in “Prototype” status so the basic features should be done already).

I agree a simple, basic ‘official’ replay system from Asobo would be ideal - at least to be getting on with. Further down the road, I’d like to hope for some more ‘fancy’ options; for cameras, for editing, etc. I have actually purchased FlightControlReplay (which seems to be the best replay system available right now), but I have to confess I’ve never actually used it - it seems very complicated and fussy. I need something basic I can work with and that won’t scare the bejesus out of me every time I fire it up.