I’m sorry, we have zero idea why you’ve never noticed it.

I only notice it mostly because it shows up in screenshots. I have a 55" in monitor, and it’s not really in my scan while flying. I have consistent 350 to 450 MB/sec internet, downloading updates is a matter of 10 minutes for me max for instance, usually much less, so, no, I don’t believe it’s related to internet speed.

YES, this is one of the biggest issues floating in many people’s boats. It bothers enough people as it is very high up on the wishlist. I get it that some people like it, but for the majority it is a nuisance. It seems this feature only benefits a minority. Probably a lot of people don’t care but definitely not a lot of people like this.

And they could solve it by having it pop up on exit, not when you turn off the battery or radios.

The Loading circle pops up at the bottom of the right corner. it seems like it shows when the sim is doing something in the background. But it should not show up. There is ABSOLUTELY no reason and COMPLETELY useless. I just can’t understand why Asobo would implement that in the sim.

Please give us a way/setting to be able to turn the logbook on and off or at least stop the logbook window from popping up in the middle of the engine shutdown procedure after each flight. EDIT: Just want to make it clear that the problem is not with the logbook itself but with any windows popping up and stopping the simulation. I and many others would not like anything interrupting the flying experience, not even during or after engine shutdown. Please let us choose if we want any popups. Than…

Does paypal work for you?

The thing is though, optimization is already coming on July 27th. World updates are already every few months but the Pop up ? No

Ok, thank you.
I do fly in VR nowadays & the display could be slightly different. I used to use three 43” screens though… still don’t recall seeing it (although if it’s in far right corner then I probably wouldn’t have seen it)

I’d love a screenshot of it though

Yes, but how hard is it to remove it?? This is not something that will cost the team more than 30 minutes to remove so It’s not like too many resources will be used on it.

It might be an issue for most of us, but it really wouldn’t a big deal for Asobo to give us the option. As said previously, there was a time when it didn’t automatically pop up.
I would vote for optimisations… but they could easily remove the logbook pop up too.

It’s only for a second and a half, but, it’s a pain.
I’d like to see that horizon line go away, too. But that’s a lot harder to get rid of. But, they’re working on that, too.
The circle is a standard windows facility asking you to wait, but, it serves no purpose here. 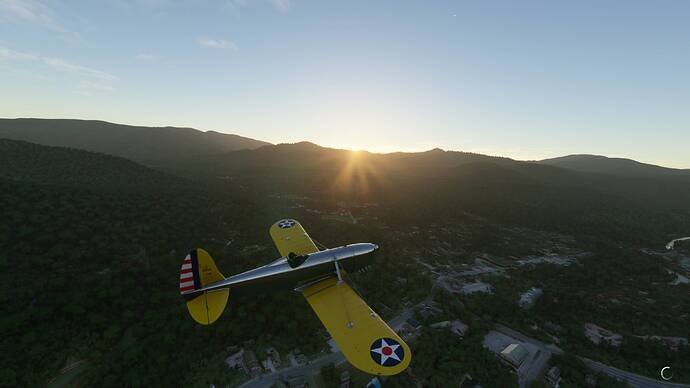 Actually, both items are probably quite hard to remove, because they’re likely deep within the structure of the code, and would need lots of touches to find all the instances that need to change, especially the circle. Sadly, even the circle is new. I have no idea why they felt they needed it. It’s probably a Microsoft standard that it has to be in there for XBox. Kind of like when Congress decided seatbelts should be attached to the door and automatically put on people. I’m just fine at putting on my own seatbelt thank you, and I like having it on. I don’t need stupid engineering decisions from Congress to help me. I’m glad that didn’t last long.

The logbook, too, they’ve discussed in the Q&A, and you’d be surprised at how hard some things are to do. Not as hard as graphics optimization, but, still takes probably a couple of days at least, and a plan.

When you land a passenger aircraft, would it be realistic to switch off the engine and 2 minutes later switch it on again and take off ?

Yes, this is realistic. I do this often. Fuel is expensive at one of the airports I fly out of. I can save $2/gallon by flying 10 minutes away. And, as another example, if I had a wife, I’m sure sometimes she’d want to stop along the way and…

Well I wasn’t referring to flying in a small aircraft, taking a break allowing your wife to… euuhm…

I always assumed this log book popup had to do with passenger and fuel procedures. I don’t know if it’s my settings, or the type of aircraft I prefer.

But I (really!) never see this logbook popup after switching off the engine with Control-Shift-E…

), or properly, on an apron… engine off… no issue. I go outside, take a drone picture, go inside and take off again. Without seeing any log popup.

Maybe it can be tweaked in the aircraft cfg ? Or it depends on the duration of your flight (?)

That’s why you don’t see it. You use control-shift-e to shut down. If you shut down the plane like you would for real, when you turn off the radio (or battery sometimes), it pops up, most of the time. Sometimes it doesn’t, but that’s a bug, not working as designed (even though that’s how we’d Like it designed

Thanks for the screenshot

Yep, can’t say I’ve ever seen it. Maybe it doesn’t come up in VR. I imagine though it only does it when it’s trying to load scenery etc. Maybe cpu… hard drive…or internet speeds make a difference.

That’s why you don’t see it. You use control-shift-e to shut down. If you shut down the plane like you would for real, when you turn off the radio (or battery sometimes), it pops up, most of the time. Sometimes it doesn’t, but that’s a bug, not working as designed (even though that’s how we’d Like it designed

Ok… then I missed that in the opening… For me, “engine shutdown” is shutting down the engine. I never touch the radio… and I was not aware you can separately shut off the battery anyway. Of course it should not proclaim “end of flight” and popup a logbook if you’re somewhere in your procedure… I agree of course.

Yes, it may not be implemented in VR (where do you put it?).
It’s basically exactly the same thing as the blue circle on Windows in PC. I even see it on the first loading screen, when I start the game, the Asobo explosion screen. It’s basically a sign of… almost anything. And, really, I don’t care that it’s there, it’s not telling me anything I don’t know, and it’s not asking me to wait for the game. The plane flies on regardless, no stutters, nothing. It’s just there.

Interesting how the logbook doesn’t pop up if you shut down they way. Personally I flick the switches on the Alpha yoke… then the logbook pops up

Because it’s programmed to show up when you turn off the radio (which sometimes means it’s associated with turning off the battery). It’s not related to engine shut down.

Just another example why you should never let programmers make UI implementation decisions on their own. Their heart is in the right place, I don’t blame them, but… you know… sometimes a little more thinking of the consequences of a decision will take you a long way.

Maybe it’s just because I’m a UI an-al-yst, so it actually hurts when I see things like this…