Well this is interesting. My flights are mostly short hops of around an hour or so. But today I had a long flight with a stop to refuel but not quiting the flight. Had diner while the sim was still running with the plane parked at the fuel pump.
After diner I took of for the next part of my flight. Approching my destination (LFBZ Biarritz) I noticed performance drops and stuttering in VR. I managed to land and thought it was caused by the freeware scenery of the airport which came with additional scenery for the city.

However, after reading this thread I loaded up the same airport again to test and it was smooth…

Exactly the same for me, after playing a few hours, FPS drops from 40 to 5FPS or even lower.

I had something similar to this. It was due to an overheating GPU but for me it didn’t take hours, maybe 10-15 minutes. I can see from a later post that your temps aren’t an issue so its most likely not that in your case.

Does the issue occur in even the simplest scenery, and you just leave the plane sat there? I realise you haven’t actually tested this, as why would anyone do that!? But if you have a few hours spare doing something else try finding somewhere with very little scenery detail like a bush strip in the middle of nowhere, spawn the plane, and just leave it there for a couple of hours to see what happens.

I have experience the same. Some kind of memory performance leak in flight that are longer than 90 minutes.

Never experienced this before.

But this happened to me when I was doing a 3hr flight today. Roughly an hour in the fps started to get worse and worse - until I landed with 5fps.

aircraft was the CRJ-700, and a flight from russia to alaska.

There are a lot of threads now about this issue, maybe the mods can merge them.

32gb of memory not enough! Hardware

Sometimes 32GB are really not enough. The RAM fills up more andd more until its full after an hour or so and the system start wild paging, game drop to 4-6 fps. With some luck you can quit to main menu but ram restores very very slow. [msfs RAM OVERFLOW] I am surprized to see that GPU-Z shows an RAM usage of up to 29GB while task manager only show up 8GB for msfs but there is not other ram consuming task. [msfs RAM OVERFLOW 2] Note that the VRAM is also maxed out. Happens today over fran…

It has been a while since I had MSFS perform so well, this update increased my fps a lot and I have managed to get over 55fps in Miami with everything on ultra. However, there seems to be a memory leak of some sort affecting the game. Yesterday I was on stream flying from Copenhaguen to Moscow. When I took off I was sitting around 45-50fps, but when I reached Moscow I had 5-8fps, I barely managed to land in what felt like a power point presentation. The issue did not stop when on the ground, s…

I’ve noticed a memory leak in the latest release that degrades my game play from about 30 frames per second to about 1 to 2 frames per second (at the end of a 4 hour flight). Plane: Daher TBM 930 Route: Tour of large cities of Middle East (Karachi, Islamabad, Kabul, Dushanbe, Tashkent) Settings: High Quality, 4k resolution, Live traffic, AI co-pilot on the radio, not developer mode Mods: None System: Intel i7, Asus 1080 Ti, 32 MB RAM With each city I check my 32 MB RAM usage. It starts the…

Can you please please pelase fix this annoying memory leak that is randomly happening with this sim. It randomly leaks memory and uses up all ram on your system. It is only this sim that does this and has happeend since the japan update.

I guess this is just one more to add to the list of all the previously reported “Memory leaks”, but this one is easily demonstrated, so here goes. It became very obvious on my current Trans Atlantic flight in the C172 at Mach 2.5 Hold on … bear with me !!! (got your interest though – Mach 2,5 in a C(oncord) 172 Set the sim to x16 and flew the C172 from USA to UK. Monitoring the memory use, now in x16 time, one could clearly see the memory use increasing, the CPU threa…

Is there a memory leak? Performance, Graphics & CTDs

There is no real kind way of putting this but after a while of playing it seems like MSFS2020 sh*ts the bed. I was rolling along getting a reasonable frame rate. Had some bad luck with a particular flight into London in a storm, the game crashed, so I restarted, set up the same flight again then I crashed (ATC had left me at 22k almost until final but having got almost this far in the previous attempt when it pulled a CTD I felt I might pull it off with a little aerobatics…I didn’t) Third attem…

Hi All, I have a high end PC with a RTX 3080 and all runs very smooth. But sometimes on major airports the FPS are decreasing the longer you are at he airport. Example: At EDDF the FPS are 35. During taxi to the gate it’s decreasing to 5 FPS. When saving the flight at that position and load the flight from that exact position it’s back to 35 FPS !!! I also saw this behaviour at PARIS CDG T1. Anyone seeing this before ?

It will become eventually more expedient.

I suspect the probelm is just the same as it was in FSX - after all, MSFS 2020 is based on FSX.

After some time of allocationg memory, using it, and then releasing it, memory becomes so fragmented, that there is no longer available in required contiguous block to meet allocation requests, and then the request has to be serviced by the Hard Drive.

Its not so much a question of not having enough TOTAL memory, its that none of that memory is now suitable for its required use.

Its something else – who knows – Clearly NOT Asobo (or me !!)

There is definitely something going on with the game when it comes to long flights. Constantly getting low FPS usually on descent phase. My guess is that after a certain amount of time the game utilizes the CPU instead of the GPU for rendering. 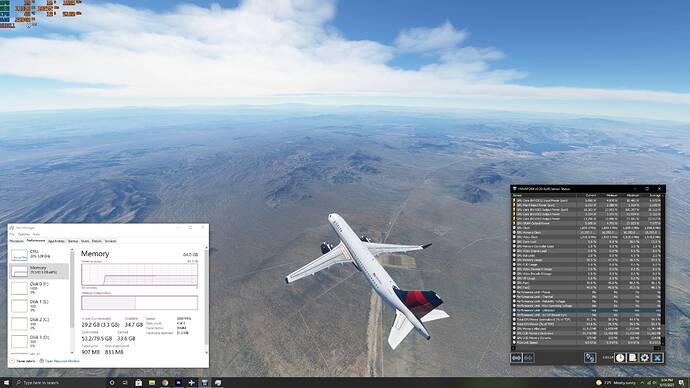 As you can see on outside view normally the game utilizes the GPU more than the CPU but at this point the GPU just remains on IDLE as seen on hwinfo. I have tried everything changing settings, disable game mode, gpu scheduling, latest drivers, increasing paging file etc. None works except restarting the game. And no my pc is not Overheating and is far from thermal throttling and is well above system requirements. 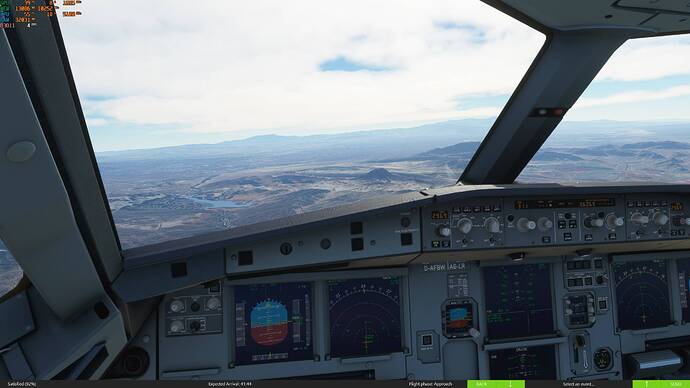 Cant even land with this FPS.

Issue still there, anyone have a workarround when this happens. Only way is to restart the sim by now? Using rtx3080 with avg of 45-60 fps and suddenly drops to 10 fps and cpu usage from 80% to 30% or less

I have the same problem here too…after 1 hour FPS starts dropping til i can´t fly or land…
I’ll try to disable photogrammetry and enable it back to see what happens.
And also i´ll try to install a free memory program.

Just chiming in to add that I am having the same problem. About 90 minutes into a flight today, FPS went from 55 to 15 to 2. Task manager showed CPU usage at about 15% and GPU usage at less than 5%. I tried dropping the settings all the way down to low with no improvement. I saved my flight, dropped out to the main menu, loaded back into the flight, and was able to continue with about 35 FPS. Didn’t feel like doing a whole restart. I’m running a 10900K and 3080 TI. Temps are fine.

Maybe the July patch will take care of this…

I’m getting the runaway ram usage problem again since I switched to Bush flights. I started with the Pyrenees and Alps. It went fine at the start but in leg 7 it just got slower and slower. 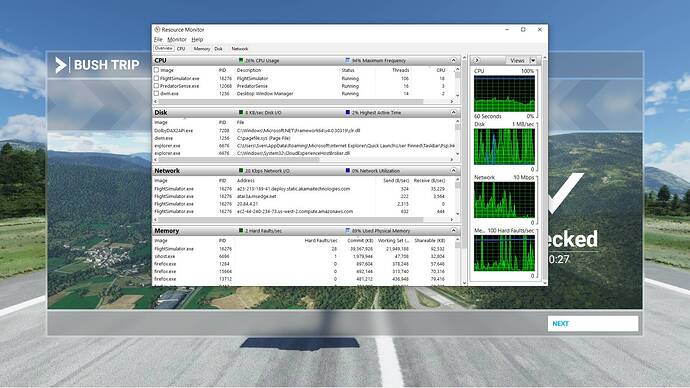 While exploring NY at low altitude committed was no more than 21GB, I haven’t seen the working set get that high since stress testing London after the UK update. (with double the terrain detail settings I’m using now)

Return to menu only freed up 4GB, still 35GB committed. Returning the menu and quitting the sim took several minutes. Ram use just steadily kept on going up during the flight.

After restarting the game, continuing the bush flight right from where the screenshot is, 16GB committed, 11GB working set, normal for my settings (high, terrain detail 100)

I also encountered the same problem after this update, I flew again yesterday
Use TBM930 to go from VHHH to RCKH. At the beginning, the FPS was about 45. After 40 minutes, the FPS dropped to 10 or lower.

Did SU5 solve the issue for you guys?

Unfortunately not. It worse.

How about deleting the Rolling Cache and creating a new one?

I’m on Xbox and just wanted to say that I have the very same problem. After around 1.5 hrs the fps decreases rapidly and the crackling audio intensifies. When it comes to the actual landing I have the “power point presentation” already mentioned by many users. Changing the photogrammetry setting or deleting the rolling cache doesn’t help. Only after a restart of the sim everything is back to normal, but again only for about 1 hour or so…
I’m sure Asobo is aware of this issue and they will fix it eventually. Fingers crossed

I am facing the exactly same issue guys! the FPS are so unstable in this release. In the same aiport, same conditions, same settings, same hour, etc I have sometimes 25 to 30fps or… 45-50…
I am saying this without moving the camera… maybe you press the restart button and you’ve got a fps increase… This is weird…
I have been playing a lot with the usercfg parameters and I can state I did’t find any root cause of this… even when I change everything to low the sim cannot increase the fps as well…

Facing the same issue. Cannot complete a long-haul flight (7 hrs +) without some serious FPS degradation. Start with 80-100, end up with 20 FPS.