We are hard at work on World Update 3 and it is looking great! This massive update contains new aerials, new DEM, over 70 POIs, 5 airports, two landing challenges, and will also introduce 5 brand-new photogrammetry cities for your enjoyment. Unfortunately, these new cities are causing a slight delay… it’s a new process and data source for us and the tools have to be updated for these cities to integrate seamlessly into the sim. The Bing Maps team is working hard to make this happen and the data provider, Bluesky, is helping as well. We believe that the remaining issues will be resolved within a few days so we are targeting the release one week later than originally planned. We apologize about the delay, but are convinced that it will be worth the wait … and that a full 3D London is a critical element of this release. Thank you for your patience. Here are a few images of what’s to come: 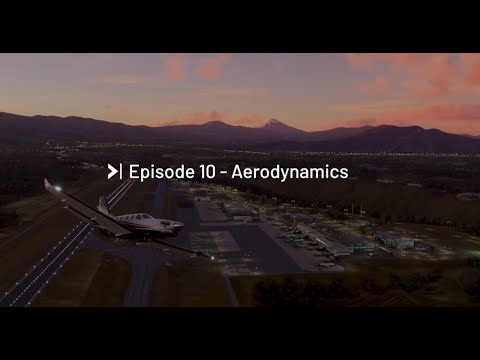 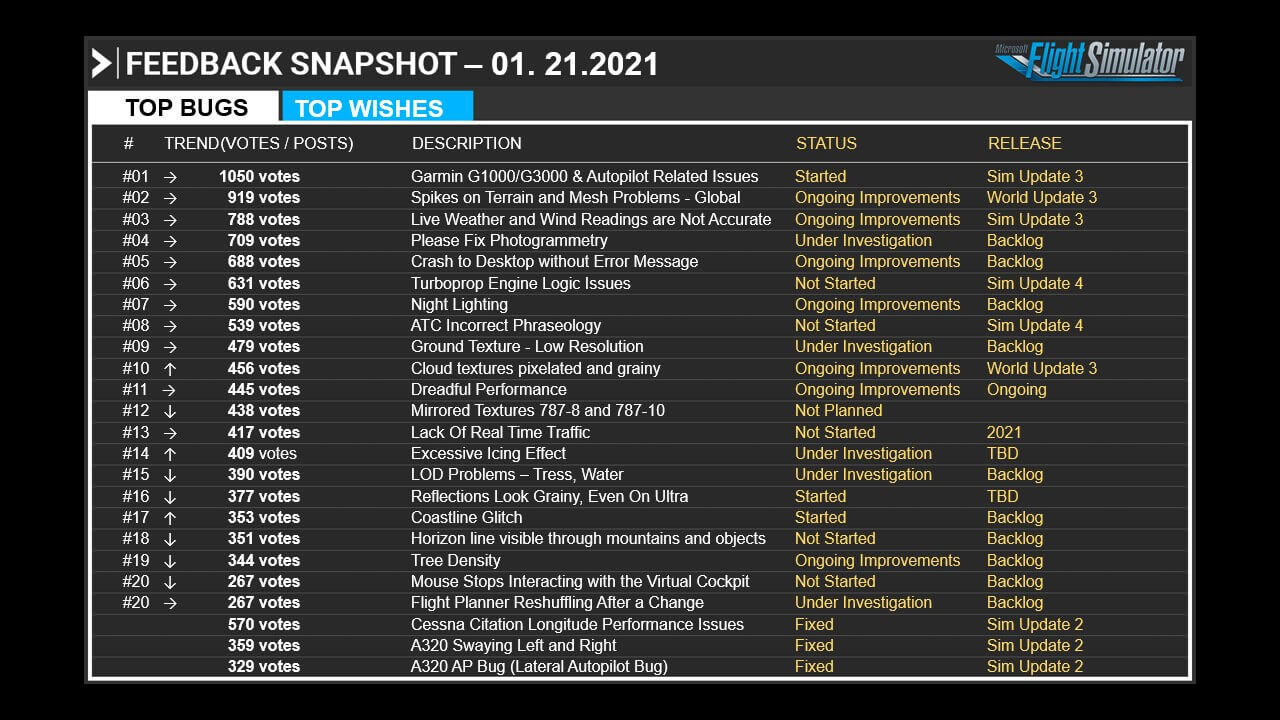 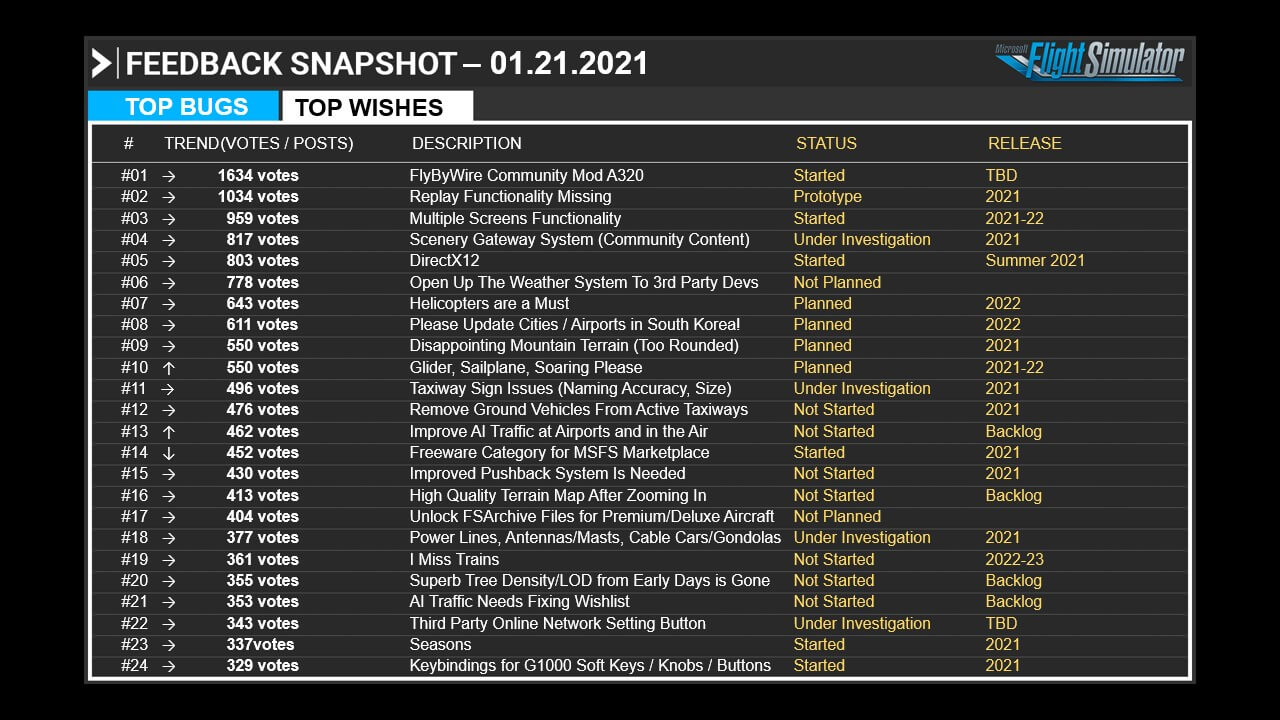 We continue to make progress with the teams at Working Title, Fly By Wire and others and are hopeful to present news about this soon – it is, after all, your #1 Top Wish.

This week we are introducing 15 new products to the Marketplace and have updated 6 products. 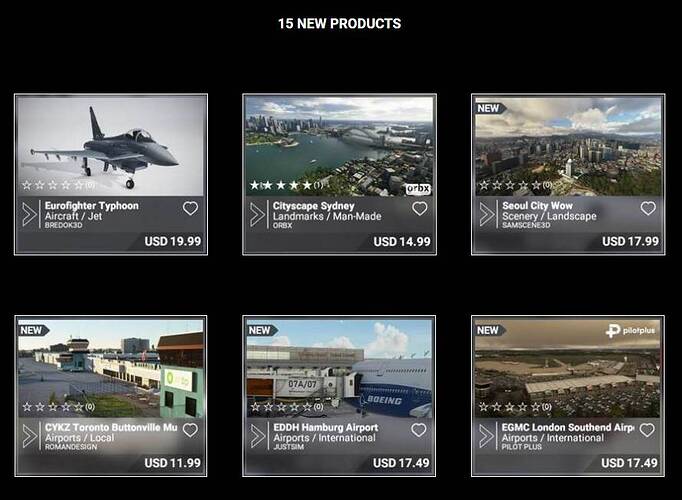 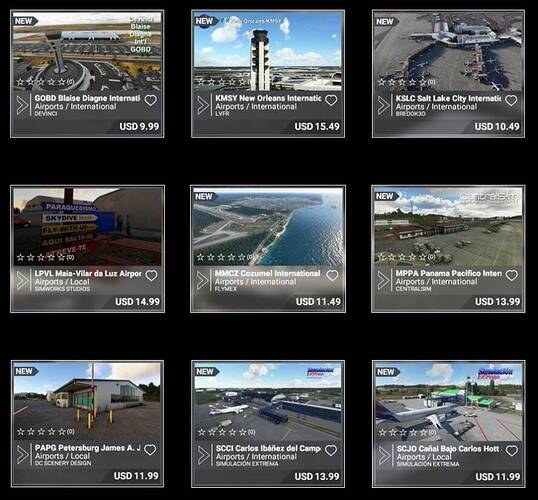 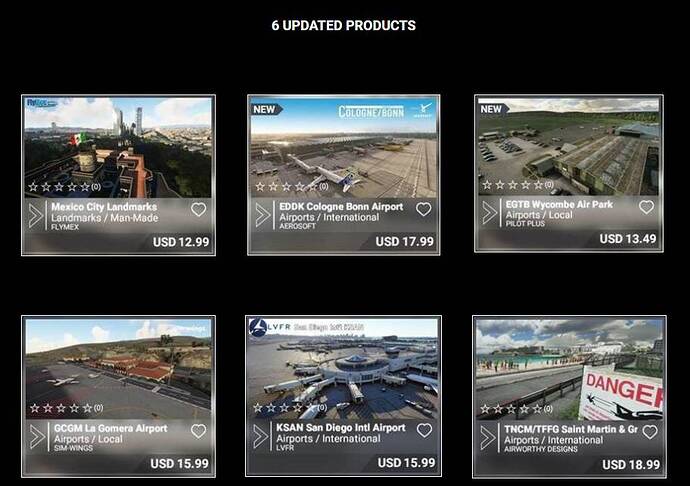 LAYOVER WITH THE DEVS 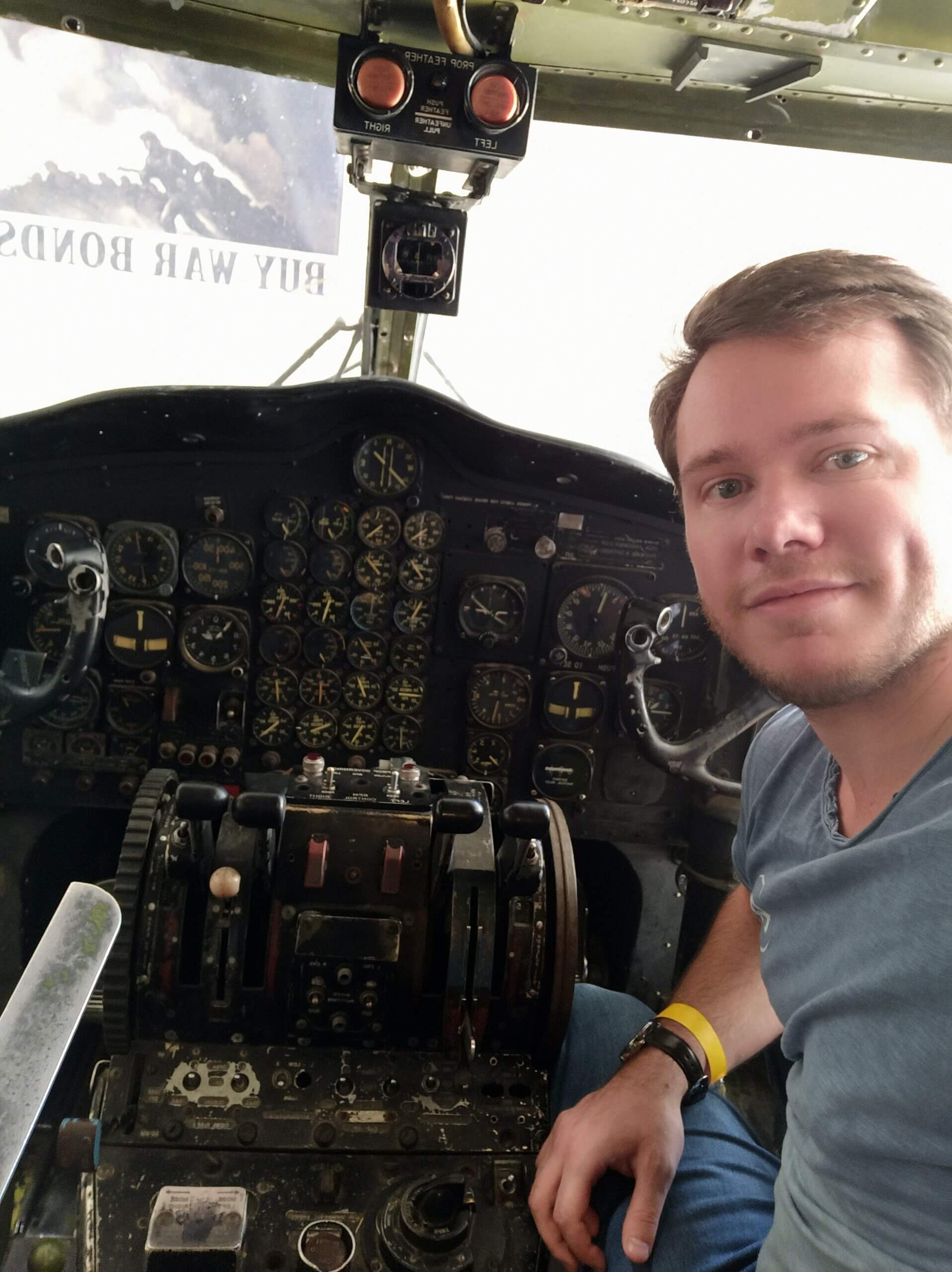 Tell us about yourself and your role within MSFS.

Hello! My name is Benjamin Rieubland but some people call me “The Plane Guy” at Asobo! I started learning 3D 15 years ago with my best friend. I have always been passionate about this for as long as I can remember. We had Flight Simulator at home back when I was a kid, and we were never able to take off with my father! I have been working at Asobo for three years now, and I will never forget how I landed there as a 3D Vehicle Artist. I moved to Bordeaux two days before I began my job, I knew nothing about the city, and I had no idea about the project either. I was picturing myself working on a space game. After a quick presentation of Microsoft Flight Simulator, Patrice (the lead artist) showed me the desk and told me, “When you are ready, you can start working on the Daher TBM 930.” Back then, I did not imagine how complex and challenging airplanes were.

As an artist I created a few airplanes on the project: Daher TBM 930, Robin Cap 10C, Diamond DA62, Cessna 172 SP, Diamond DA40 NG, Cessna Citation CJ4, and most of the cockpit of the Airbus A320 Neo. It is awesome to know that these airplanes are the most used in the Sim. Modeling, texturing, animating, and testing are just a part of what I have done. It is important to know that all the vehicle artists worked, at some point, on all the airplanes. We shared knowledge and improved everything we could. With all the experience that I gathered, I had the chance to evolve into the role of Art Outsourcing Manager. Now, I take care of all the art done externally, and I am proud to prepare and review the work on the airplanes that will appear sooner or later in Microsoft Flight Simulator.

Where does your passion of vehicles comes from? Does crafting other types of vehicles help in the process of creating aircraft?

My passion for vehicles has run in the family for generations. For instance, my grandfather had a truck company, and my father made his office in what used to be the trucks’ garage. Since we did not have a computer at home, every time I could, I would go to my father’s office to play on his. The trucks disappeared from the garage long before I was there, but the garage smell never left, and I think at some point it reached my ambitions.

Crafting other types of vehicles is different from creating aircraft. Before joining Asobo, I designed car parts and vehicles in 3D. At that time, I was far from imagining that an airplane would be difficult to create and understand. One cannot compare the complexity of any car interior to an airplane, especially an airliner. Apart from the number and depth of details needed, the technique is pretty much the same for all the vehicles. For example, you put a blueprint in the background and start the model following the main lines, and you add more and more details all along the process.

Which aircraft(s) would you love to re-create into MSFS and why?

I have three of them that I would love to see in MSFS someday. The first one is the Kyushu J7W1. The design of this airplane is just wonderful. There is nothing else that closely resembles it. This airplane’s shape was very futuristic for its era. I am curious about how the jet engine version of this airplane would have looked. The second one I would like to see in the sim is the Airbus Maveric, also because of its design. Its silhouette is uncommon in the sky and a lot of people will be surprised the first time they see it. Lastly, I would love to relax and explore the sim with a hot air balloon, moving with the wind as in real life.

We had a great lesson this week learning about stalling, slow flight, and landings. You can check out the latest videos here!

Check out the schedule below for shows through next Friday. Interested in joining us tomorrow for the Guided Hong Kong Tour? Click here for flight plan and details.

We are excited for the return of our monthly Live Developer Q&A this coming Wednesday, January 27th at 10:30am PST. We know you have a lot of questions, so we are extending the show by 30 minutes to have more time to chat with you. We are looking forward to it! 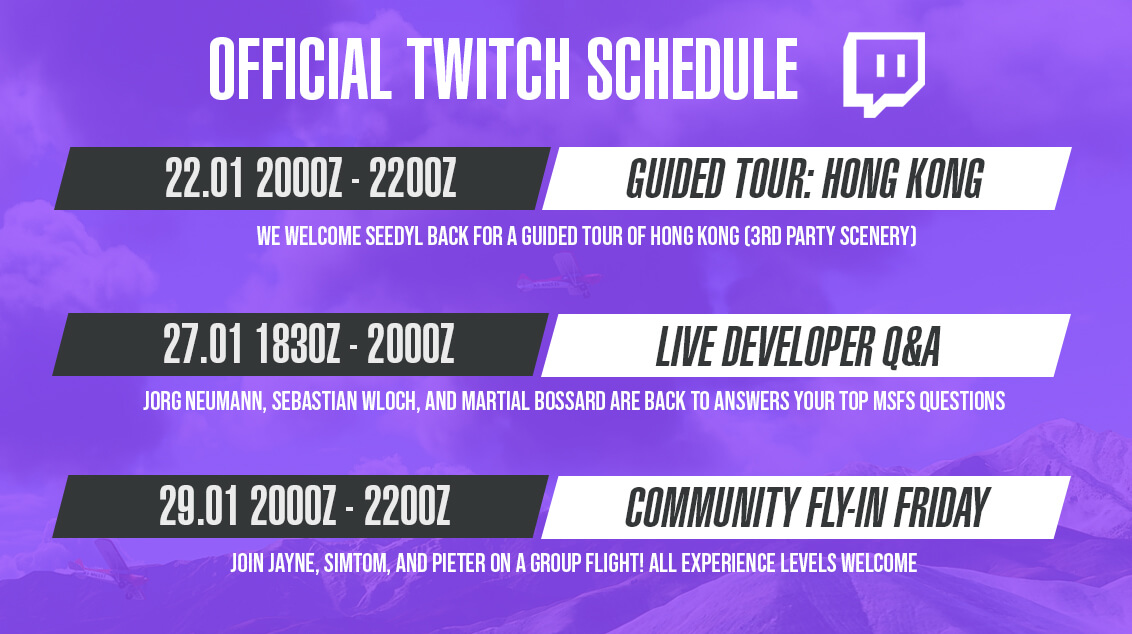 I Don’t Want To Fly Anymore from r/MicrosoftFlightSim

This past week we challenged you to take a screenshot in Snowy Canada. Thanks to all those who participated! See below for our top picks!

Our next challenge: Bustling Cityscape. 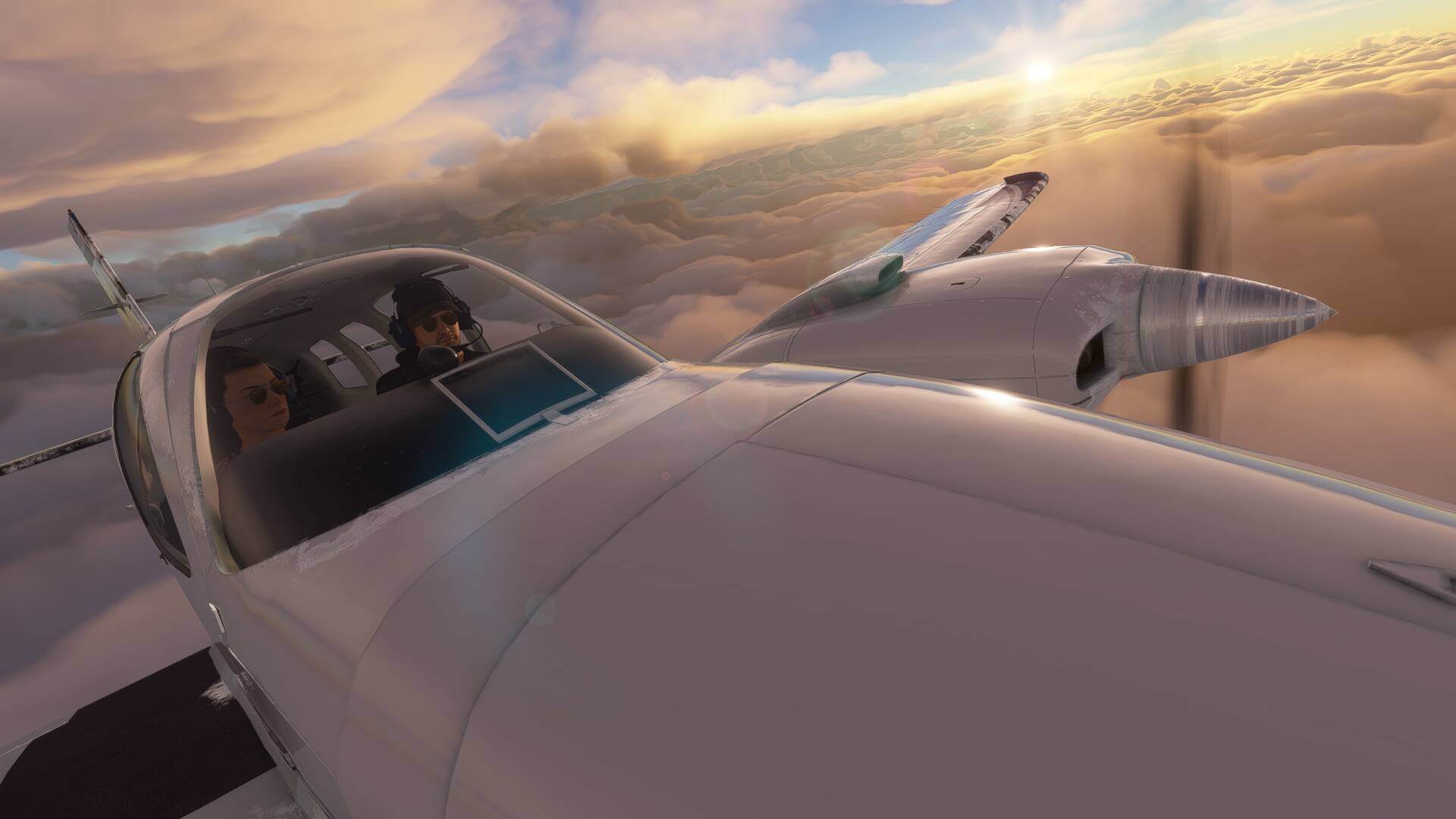 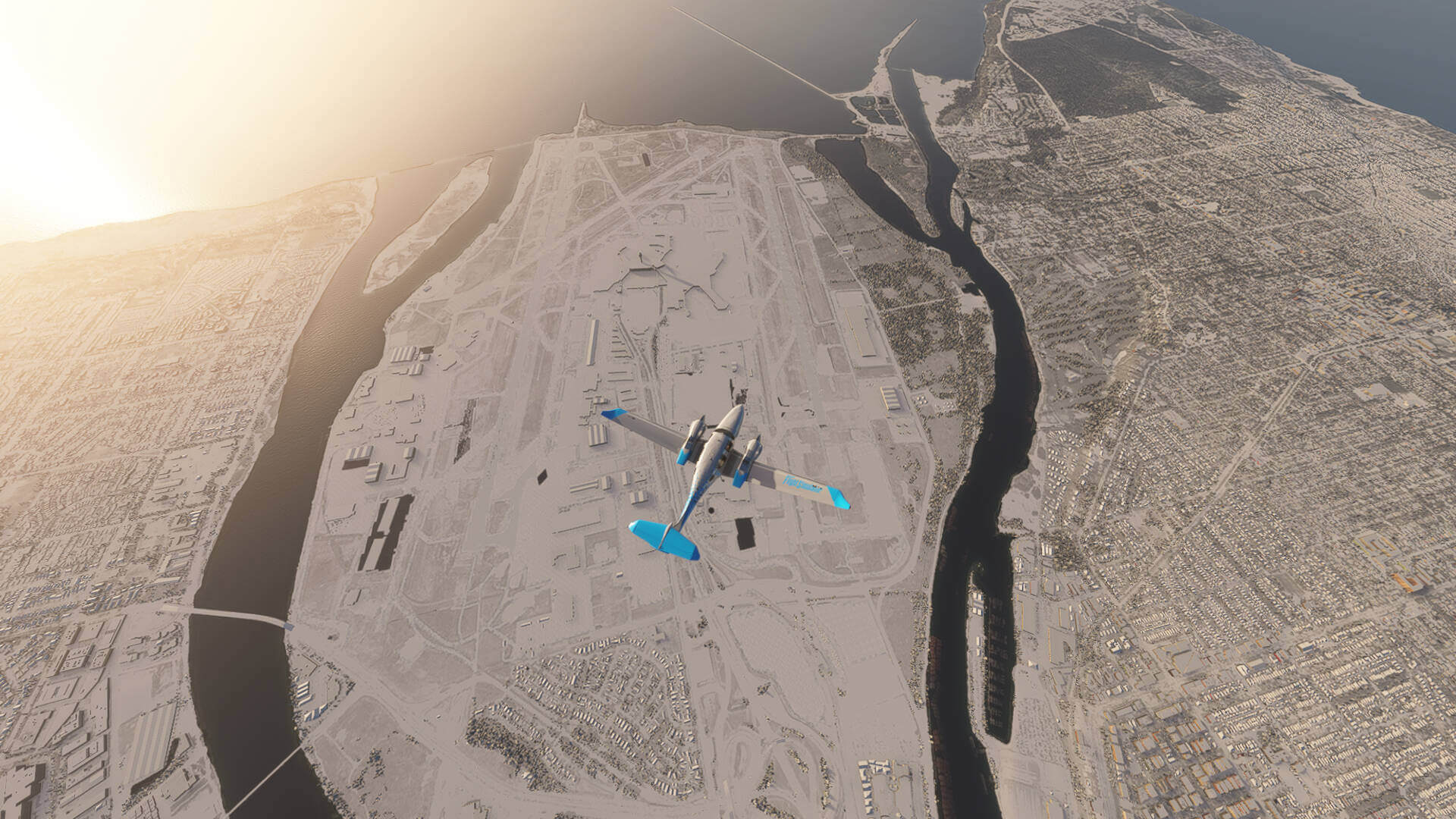 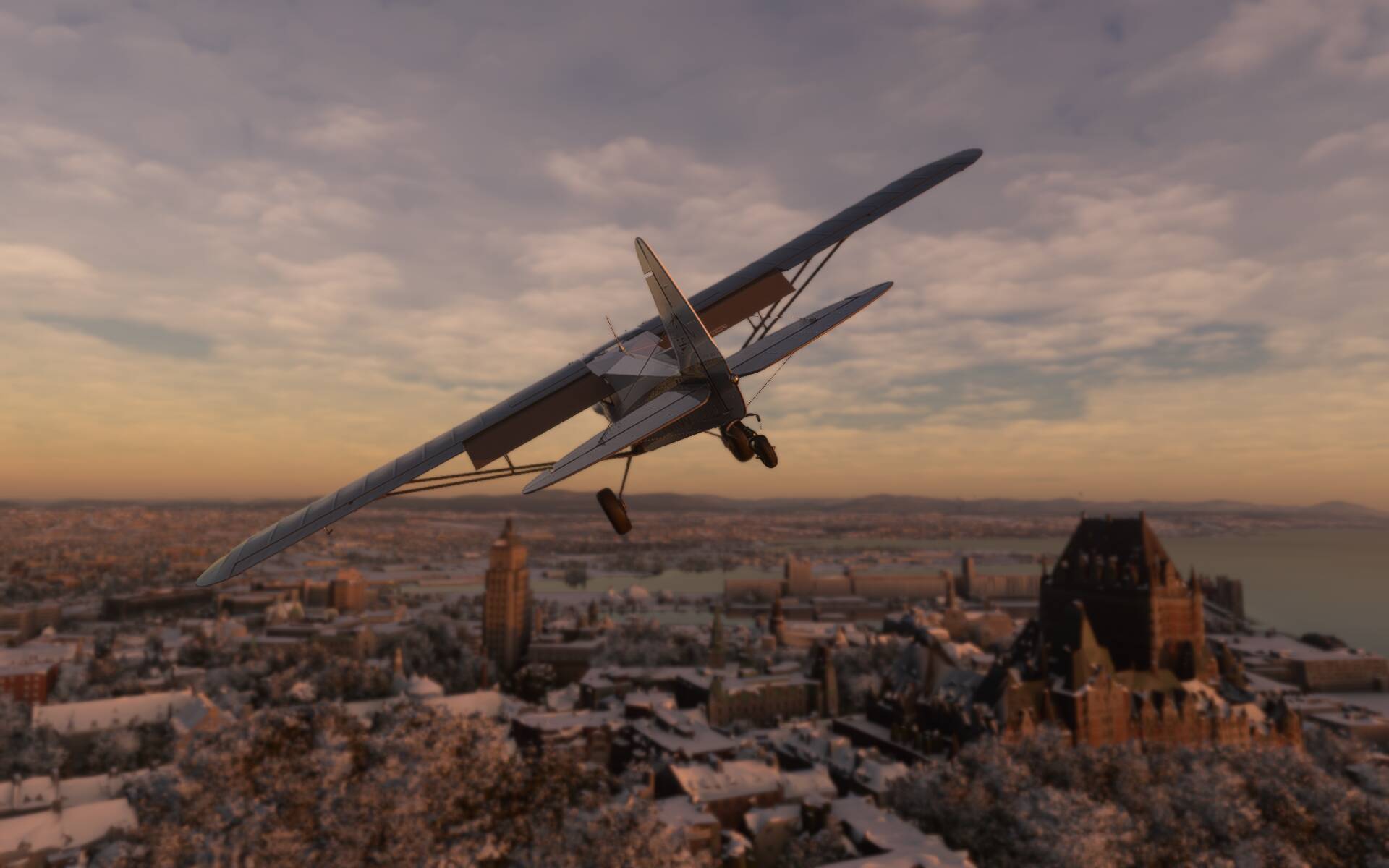 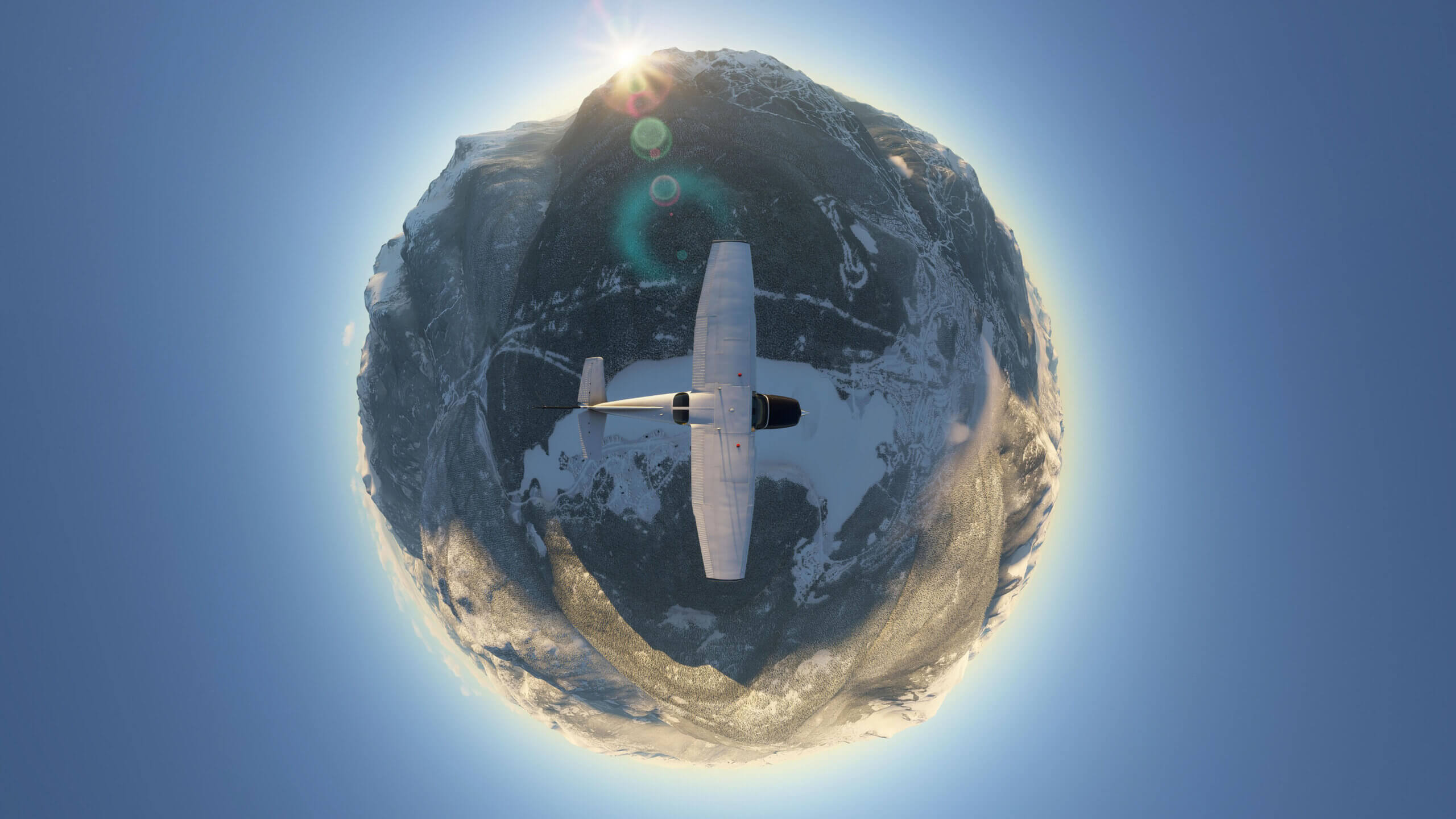 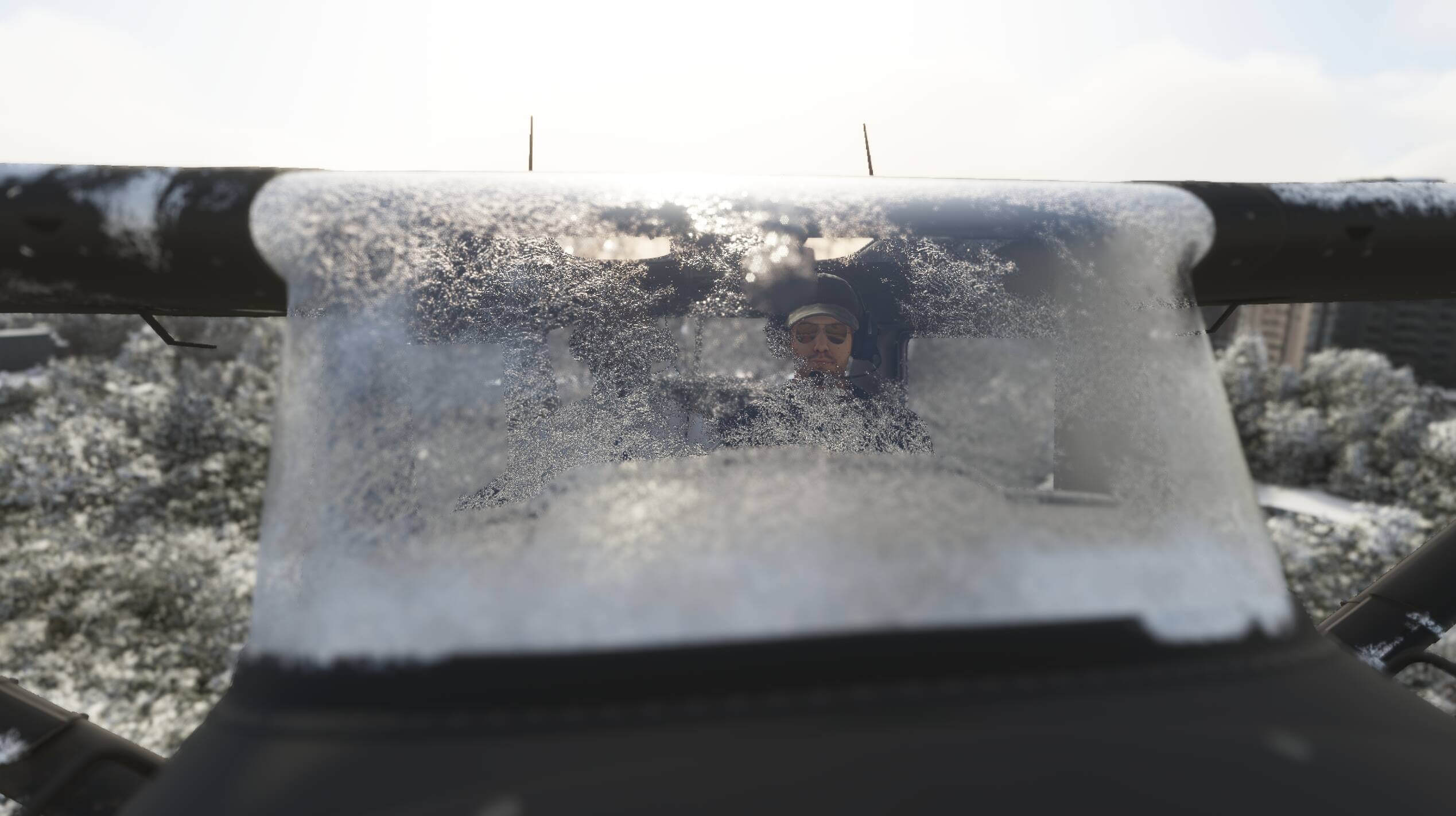 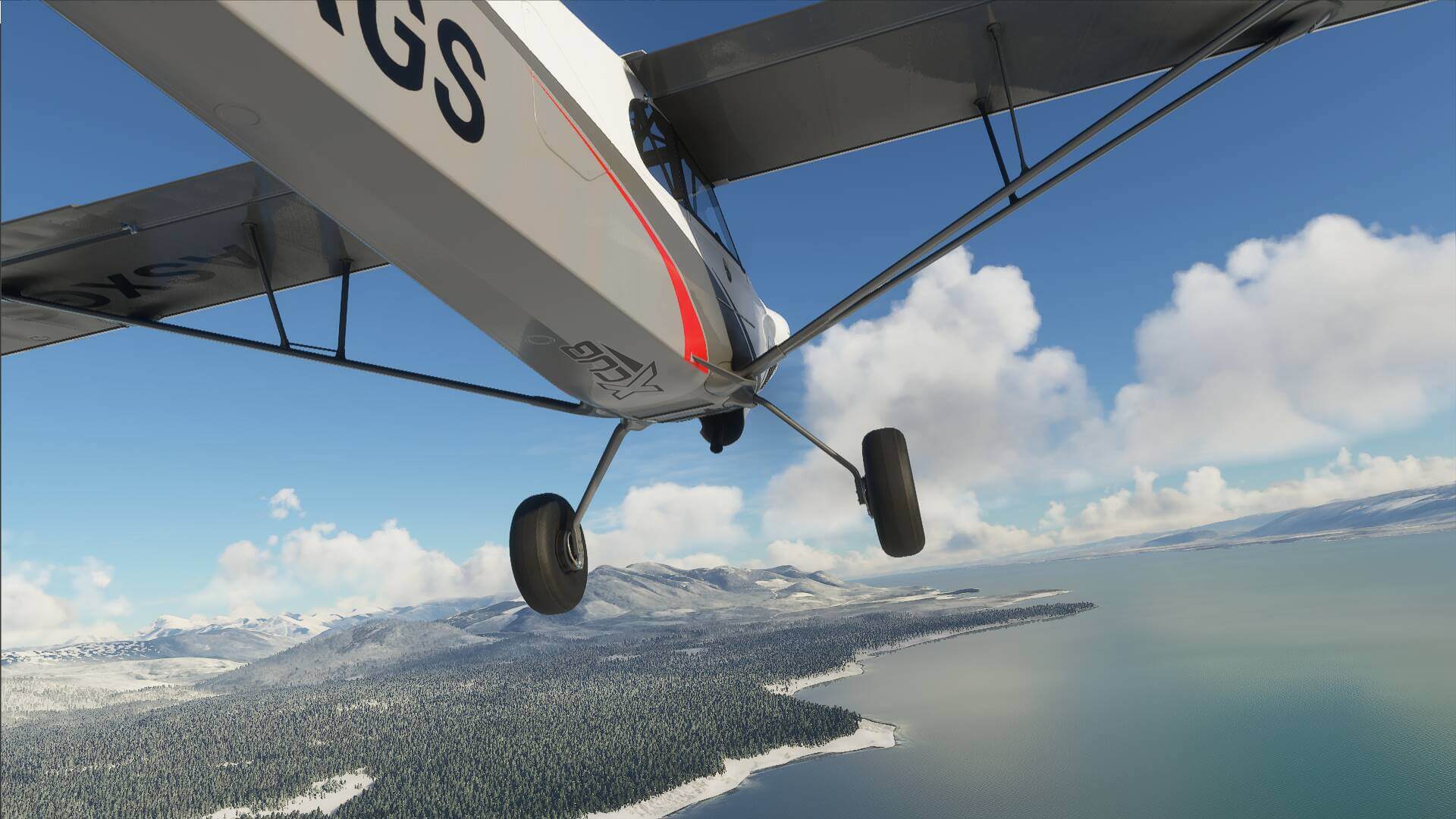 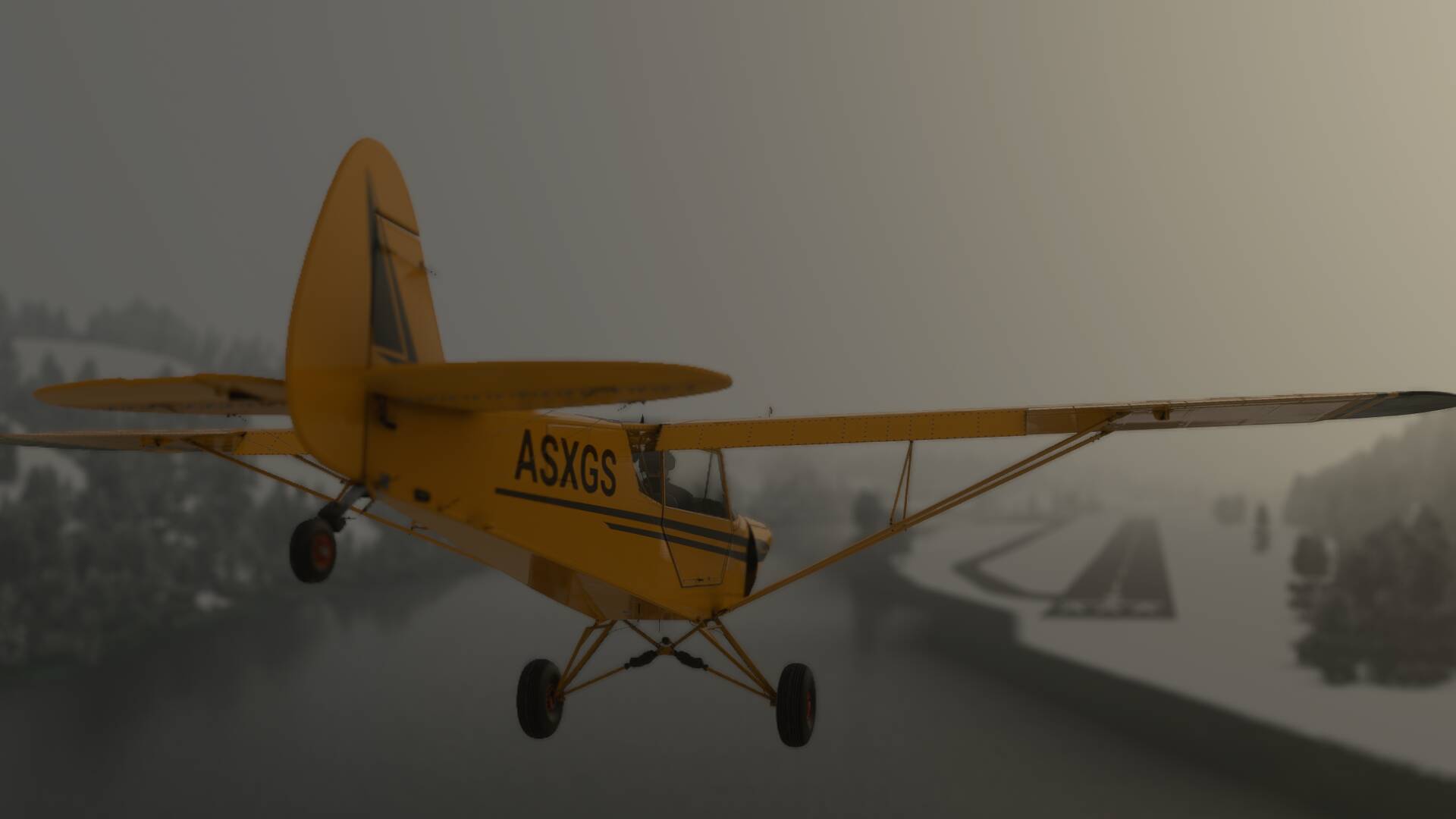 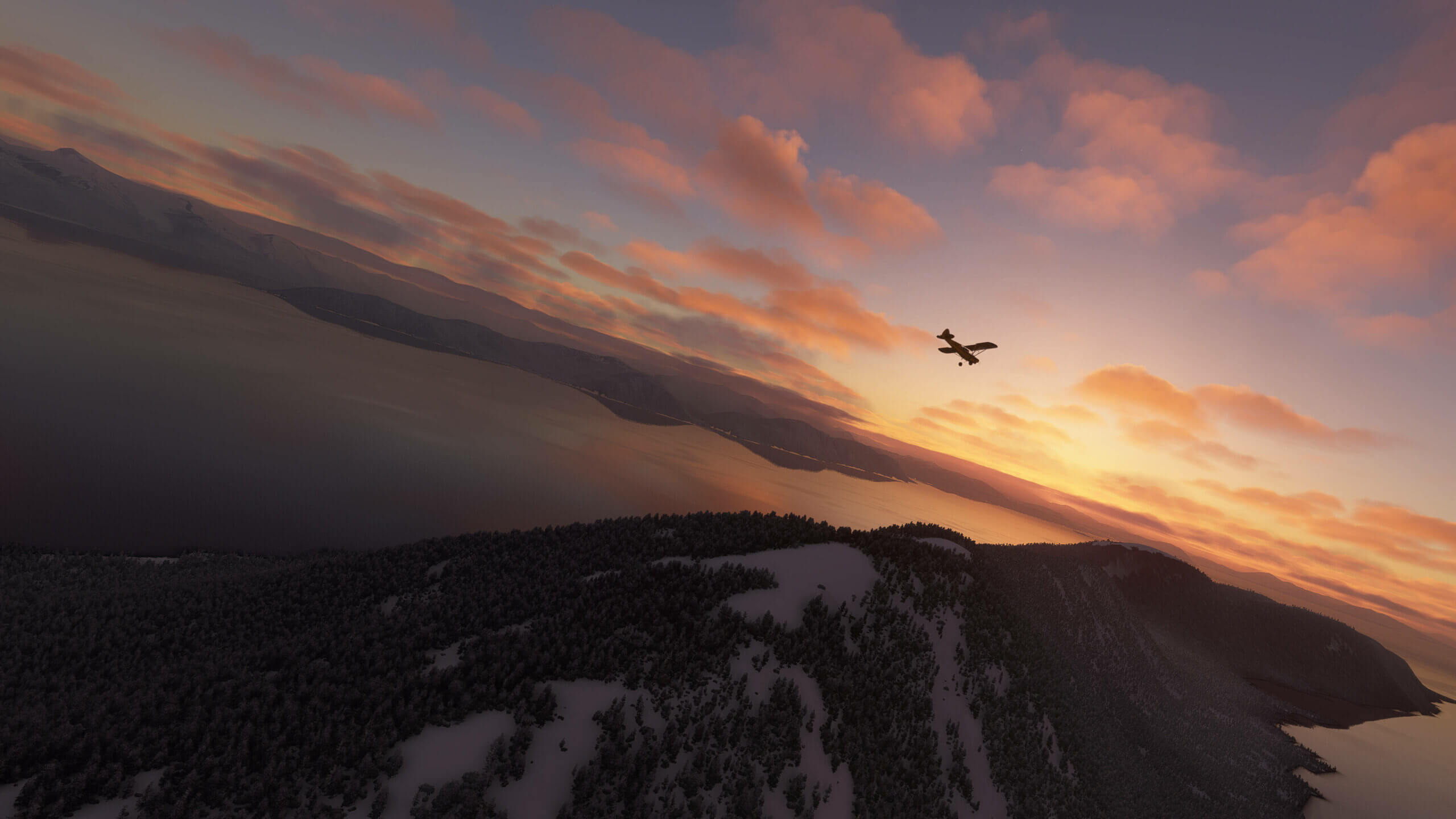 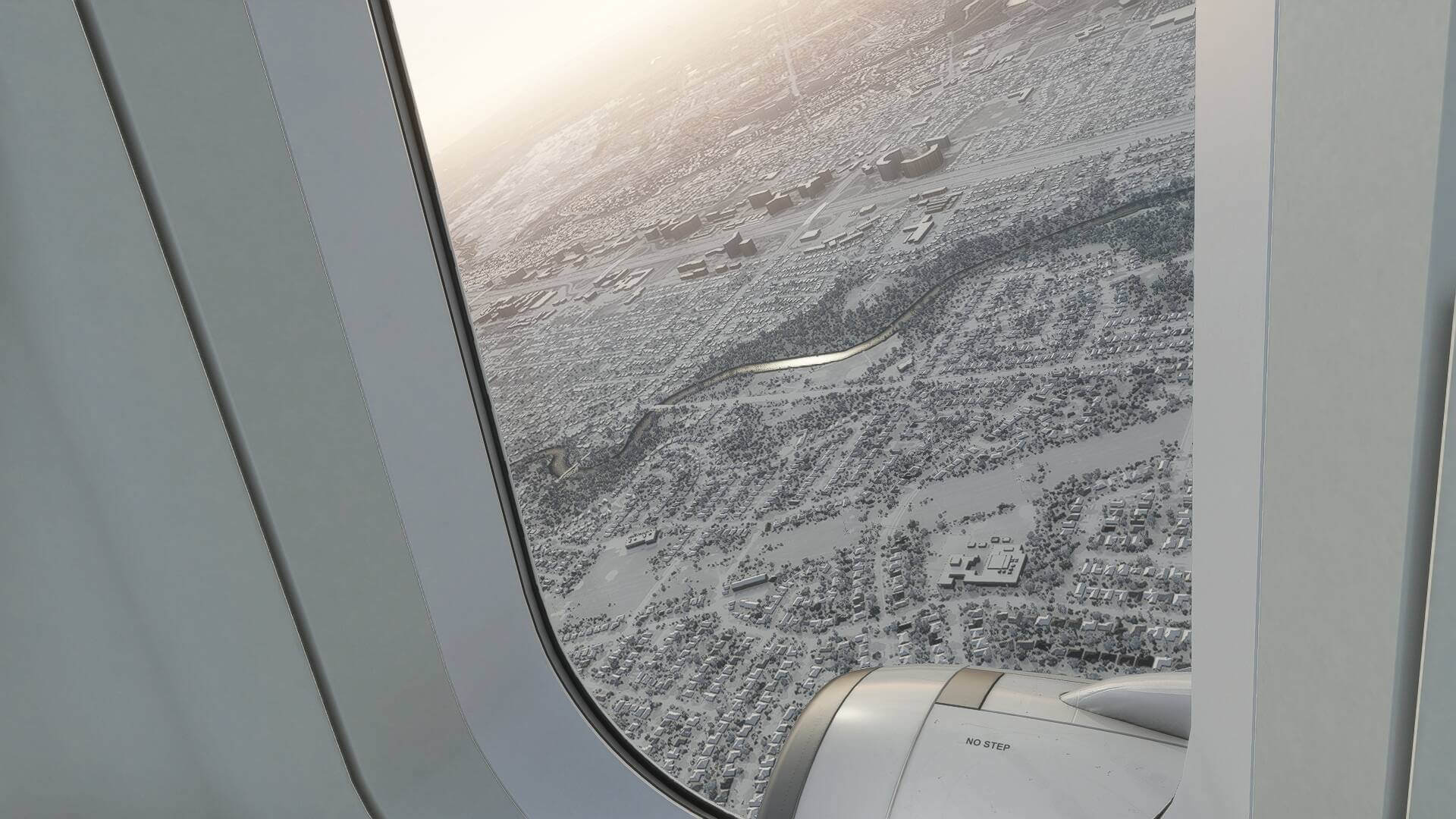