Color is off since Sim Update 5

I have experienced a strange problem since the last update. The colors just seem really off. It’s particularly noticeable with the clouds but it is everywhere. There seems to be purple and green where they shouldn’t be. It’s really throwing off the realism. I’ve tried adjusting settings with no luck. 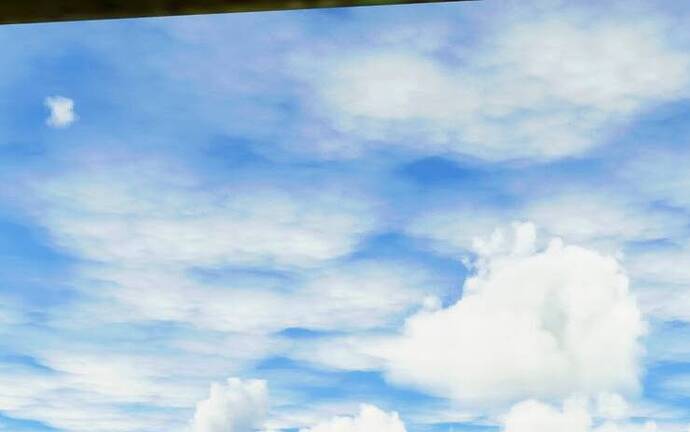 I agree with this. Colors do seem ‘off’. Washed out as well.

Certain scenes were stunning before and now they don’t look realistic at all. I wonder if it was something that was done for Xbox. I sure hope they switch it back.

To me it look like they pushed too far saturation of colors to make them pop more. In photography you do that when you have fade colors but also to give a «candy» effect, here in FS what we call sometime eye candy (appart from more objects). However, it often (when pushed too much) reduces realism.

You could be right. I mainly notice it with the clouds. I reminded me of the Simpsons intro.
Without HDR on the scenery looked brighter than I remembered from before. That was a common complaint from non-HDR users. The colors were too dull.

But clearly I think they pushed it too much which make it unrealistic.
I did the Isafjordur landing challenge again in this new version and it look like less realistic than the previous one : everything is too much. Too much colors (even at the sunset) and contrasts.
And I liked it seeing all the other players before.

Yeah, having another fly now. The issue I think is that the brightened up the scene but just brightening all textures doesn’t work. The roads that a covered in asphalt look light brown. The sim had that issue before but it seems worse now. I find it hard to say without a side by side comparison. When a graphics update happens we quite often get a little too picky because we simply got used it it but now we pay a lot more attention again.

But, the initial issues I had with draw distance are largely gone in Adelaide AU which is where I fly. It looks like an initial load thing. Right now, this build is looking really nice.

There are some regressions:
I think these aspects are worse:

These aspects seem fine even though they get a lot of complaints. Note that I did spend a few minutes retweaking my sim settings. Like I do most patches.

Different parts of the world are made up of different densities of trees, buildings, hills, etc. Comparing FPS is meaningless unless you say exactly where you are. My test flights are from YPAD to YADG. It is certainly less demanding that some places in the world. But it is home and extremely familiar to me between 1,500 and 3,500 feet.

Since the initial bad load, it has been great. I’m looking forward to some of my add-ons working!

Clouds have severely degraded visually - I fly with Ultra at 4k and the difference leaps out. Looking down on light clouds they are transparent - it’s so sad to see.

I think eye adaption is the biggest problem.

I have the same problem since the update:

The colors look like they’re not real! Washed out and, above all, very pale.
The first thing I thought was that my settings had been reset to the original, but I still had the same settings as before!
The overall impression no longer makes a nice picture and the worst thing I think is that everything is very bright in the area, hardly any shadows or surrounding obscuration, although these are on Ultra!
Very bad and I just don’t enjoy doing a real simulation anymore!

Which thread did you get the info from?

Don’t bother, disabling those settings only makes it worse. Asobo downgraded the lighting and shadows.

This is such a shame. I played MSFS since its launch and everytime I found myself immersed. Everything looked and felt so real but the new “Update” destroyed that feeling completely. Now it looks average at most.
Edit: I tried the suggested fixes but looks exactly the same. I also see a reduction of the reflection quality which makes the planes look very cartoonish

We really shouldn’t need to fiddle around in cfg files. Please revert the lighting settings back to what they were.

So what settings in cfg should we change to make colours look better?

It’s all there in my previous post. In my opinion eye adaption is the problem child. Set that to 0 instead of 1 and with that done it looks pretty realistic. Remember that there are two lots of settings in the usercfg file, one for normal play and one for VR. Unless you use the latter you don’t need to change that one.

It might surprise you to know just how bright an airliner cockpit at altitude can be. It’s often quite painful and what you don’t get to see as passengers are the myriad of things most pilots put up to block sunlight. That’s on top of the sunglasses.

I think the issue is that Asobo have given us the brightness (although they’ve overdone a bit IMHO) but then given us no way to combat it. The reality is that you wouldn’t sit looking at that level of brightness for a second longer than you needed to, so to introduce it as a defacto effect/level in the game is an odd call for me. Could virtual Oakley’s be a thing?

If this is here to stay they we need something!

ps I’m not seeing any downgrade in texture visuals at all. Quite the opposite in fact, with everything looking more detailed. I’m also sure the sound is better too, which must be down to the better memory usage.

ps I’m not seeing any downgrade in texture visuals at all. Quite the opposite in fact, with everything looking more detailed. I’m also sure the sound is better too, which must be down to the better memory usage.

Please look at @lukasrz1984’s image again, how can anyone honestly say it looks more detailed?

I’m not saying it doesn’t.

What I did say though was that on my setup, with my settings, things look just as they did before at the very least, and in many instances look better.

ps How do you know those images were taken under the exact same conditions? If the time of day, cloud cover etc was even slightly different then the image would be different.