I just had a few touch and go at my local airport (LECO) with the 152 that I know well (for having flewn it several hours taking PL classes). Apart for an exxaggerated flaps drag (that wasn’t there before, but is still closer to RL than no drag at all) I can land within specs (60-55 kts, gentle flare). I do not experience the increased ground effect that others reports, but that could depend on the high-wing config of the Cessna (low wing planes have indeed greater ground effect in RL).
All in all I do not complain too much, although the flight model still need some tweaking

yup Asobo stick to making scenery, leave the aircraft alone as they have no clue what they are doing
don’t forget to up-vote this maybe they get a point across they making it more and more into an advanced google earth or maybe Bing Earth…

which is fine and good but just stick to it making it Bing Earth… I love the nice scenery but leave aircraft alone Asobo ! Those who don’t care they will not notice crappy aircraft have them with the beauty scenery

Since there are various issues with Premium and Deluxe aircraft and the status for fixing these items are backlog we request that the .cfg files for these airplanes are unlocked from the .fsarchive structure. The community has a number of people who are very good at modifying airplanes for more realistic performance and are unable to touch the premium and deluxe content due to the DRM.

Yes, if you downloaded the development version then you should have the fix.

Same here! Can confirm that exactly the same happens to me several times since latest update.

Regarding steep approaches, apparently full flaps and gear down and power idle is insufficient in MSFS in the current state so there isn’t really anything left to do except slipping…

Or FIX it, by setting better parameters in the cfg files, and down the slippery path you go !!!

In last 2 days just after this update, I find my self trying to fix c172 flight_model.cfg to fit real aircraft flight dynamic as I know as flight instructor.

I know last update was change ground effect and flaps but I think there are another changes in aircraft stability and control response and stall behavior.

I thing flight dynamic before the changes was better.

What do you think ?

Well, my experience is as follows. I’ve only flown the Caravan since the update so can’t vouch for the other planes.

The more I fly the 172, the more I notice the small differences. It definitely doesn’t want to descend as quickly as it once did, even with full flaps. What I’ve taken to doing is coming it at 50kts rather than 60kts, and that feels more like it did before.

I hope Asobo can deal with this soon. It’s flyable, but doesn’t feel quite right any more.

On another note, I had that rare issue where after landing, and I have hit the breaks quite hard, I came to a dead stop, but could no longer move. I wasn’t paused, engine was running, parking brake was not set etc. Tapping the slew key didn’t do it, but slewing then moving up a bit allowed me to fly away, and land again. That’s only the second time I’ve seen that.

Are all aircraft affected? The TBM, Longitude, A320 cannot be landed in a realistic way. I can’t believe that they took their time to “polish” the update and they missed this??? WTF Asobo??? And this ain’t the first time this has happened…what a joke of a QA process.

Yep, the Caravan is totally nerfed at the moment, simply ridiculous. Here’s a shot of me floating along with full flaps down and the throttle at idle, it’s just very slowly descending with no stall warning at 43knots. In summary totally useless.

I was about to start FSEconomy today using the Caravan and now that’s ruined until a patch comes out.

I simply cannot understand how Asobo could be so incompetent as to release an update that does this to a so called flight simulator. Get your act together Asobo and use a volunteer beta team to test for this sort of stuff, because you lot are not up to it by yourselves. 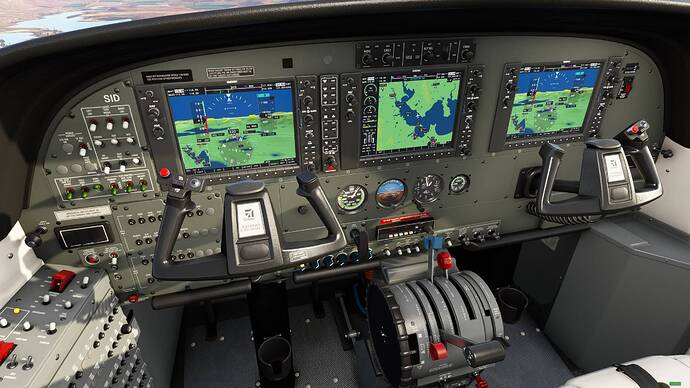 Yeah…Asobo is a mess…this is not the first time this has happened where flight mechanics are broken rendering the aircraft un-flyable…WTF.

Wow, retracting flaps on flare. Outrageous to have to do this.

Have asobo even accepted this is an issue? I didn’t seen anything on the known issues post on zendesk when I checked earlier.

If they simply missed this in testing then that is disappointing but if actually it was known pre release this is probably worse.

The community reps have acknowledged it in this thread if you scroll back up and have a look. The thread title has ”[REPORTED]" in it, I didn’t put that there. Presume the community reps did to flag that this has been escalated to the Devs.

A new feedback snapshot has just been released. This issue isn’t on the bugs list. A rep said they compile those lists earlier in the week so this just missed the cut. They also said that this issue is getting a lot of attention from the Devs and that they’d have some messaging on it very soon.

No doubt. Just tried the Baron at KDAB. Stall horn comes on at 58kias flaps full, gear down, throttles at idle. It’s supposed to be 85kias. Also, VMCA is a joke and the engine can’t be feathered. Reducing prop to feather and even just about stalling the aircraft to “reduce windmilling” does nothing to stop the prop. Just add in mixture again (mixture used to deaden the engine) and it starts right up again.

Holy god they have some work to do.

For the TBM930 (only) others not tested

this works for me

Look for the line:

Holy god they have some work to do.

They sure do, what a mess. I’m really fuming over this one.

They also said that this issue is getting a lot of attention from the Devs and that they’d have some messaging on it very soon.

That’s good to hear, hopefully they will release a hot fix ASAP. How they managed to mess this up is beyond me.