Since last update, MSFS dont let select any airport or gate or runway.
And challenges are CTD the sim…

I have the exact same problem! Uninstalled Navigraph but that didn’t help.

I think a lot of us are having this problem and oddly the update thread seems to have disappeared too. This must be the most embarrassing so called patch yet, its rendered the sim unusable.

Was in a flight about 2 hours ago in the FWBA320. Crashed, restarted and patched. After patching, I can not choose any airports. After some messing with it, I was able to get a flight plan, and fly lit up. Soon as I hit fly, I crashed to desktop. Uninstalled the plane, still same issue.

I thought it was a problem, but just zoom in a bit further and it will bring up the departure/arrival dialogue to click on.
They did state in the release notes that the zoom levels had been changed.

I’ve moved this into the bugs section to check how many people have this issue, and notified the team!

I was hoping I was the only one with this problem. Do they not test this stuff before release?

Exact same issue unable to select any airports to depart at. So therefore cannot select Fly button make the sim useless. here is what I get when trying to fly 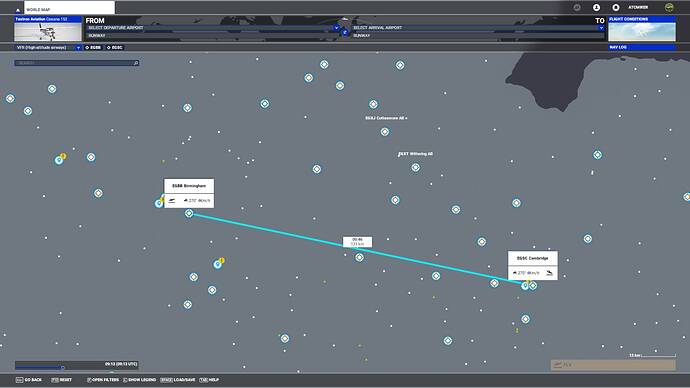 I had the same problem, restarted my pc and I had another update, around 4.6gb. After that I was able to play the new landing challenge…

Join the merry band of disgruntled Simmers here with the same issue. Hopefully they can get a fix out soon. I have faith at the moment.

I have restarted numerous times and zooming in does nothing either, nothing works.

Same here, but rebooted PC and on Sim restart I hve been directed to the MS Store where there is another 1.03 GB update, - currently downloading that, will post back the outcome.

Join the merry band of disgruntled Simmers here with the same issue. Hopefully they can get a fix out soon. I have faith at the moment.

It looks like we’re all going back to whatever sim we played before this one. Maybe it’s time to fire up War Thunder in VR again.

Reporting this now, please continue to leave feedback and anything specific about this issue. Thanks!

Opened MS Store and updated MSFS there. Started MSFS and got another 4.8GB update and now it’s working again!

After restarting the Sim there is another 4.84 GB update downloading now (a second large update today with the smaller 1.03 GB in between), I’ll report back.