Yes, moving the slider in the steam menu never had any impact for me in visuals or performance even if I put it outrageously high or low. I had thought this was a limitation of virtual desktop but I tried it through link and had the same. Maybe I just needed to restart the sim or something, I’ll have another experiment.

I am wary not to derail this thread which is about the Index, sometimes I am tempted to gift a quest 2 to Captain lucky just to get his input on that headset

I am wary not to derail this thread which is about the Index, sometimes I am tempted to gift a quest 2 to Captain lucky just to get his input on that headset

I’d be pleased but only if you also gift the computer that goes with it. I don’t want to have anything to do with the company backing this headset up on any of my electronic devices…

Yes, moving the slider in the steam menu never had any impact for me in visuals or performance even if I put it outrageously high or low.

Thank you, I was using the per application but maybe will experiment further, especially given the good quest results mentioned above.

I’d be pleased but only if you also gift the computer that goes with it.

I’m afraid I need the PC, but I’ll grant use of it via virtual desktop nightly between 2300 and 0700 hours UK time. No crypto mining and stay out of My Documents

Thanks. I’ll keep motion prediction off for now, as it’s unacceptably distracting to me.

I’ve done a few more tests yesterday about this. Motion smoothing is taking more resources and usually you can balance this out with fewer frames per sec (and artifacts of course).

What stroke me is how much FS2020 has a struggle when on ground, to the point I have to disable motion smoothing otherwise FS2020 is like rendering pairs of frames in reverse order (displaying frame 2 first, then frame 1 next, then frame 4, then frame 3 etc… this is what it looks like).

Yesterday I’ve tried the FBW A320 latest dev version but this time with motion smoothing off. I’ve been able to keep 30fps (SS 152% and all the rest unchanged) on the ground, and when up in the air 45fps, and this was not bad at all to me.

If you read this topic from the beginning and when VR was initially available, I was explaining how 30fps constant is still useable in practice with the A320 (not FBW back then) and after a while you get used to the juddering. It has been months though that I’m only using motion smoothing at 18fps so I go used to the artefacts instead! Switching back to motion smoothing off was slightly uncomfortable at first because of the juddering but at 45fps it was not so bad after a short while, especially if you develop the habit of rotating the head (reprojection kicking it) instead of translating it (juddering is unavoidable in this case).

PS: about “FS2020 on ground taking too many resources while on ground to the point I have to disable motion smoothing”: this one is puzzling me still because in 2D I can see there is still enough room on the CPU/GPU. I’ve been wondering whether FS2020 wouldn’t be using the GPU in a way which is interfering with the Turing silicon the NVidia Optical Flow lib is using for motion smoothing. What I mean by this is that it is has if both FS2020 and Optical Flow are fighting for the card silicon, which could be the case if for example FS2020 would be using compute shaders for example and if those would take a longer processing time when on the ground (handling much more things). This is one area I’d really like to figuring out, at least just by mere curiosity for these sort of things!

After further testing, Win10 updates, NVidia updates etc… this is what I’m starting to consider my best settings right now for the Index.

Of course, if your hardware is more powerful you will be able to raise a few settings there and there, but the following should be a solid base for most users to get started with.

NB: I’ve been adjusting these flying the FBW A320 which is a demanding aircraft.

Do you have any specific reasoning behind “threaded optimisation” being off in your drivers?

@BazzaLB
Is testing both a “reason” enough?

NB: I believe I’ve already commented on this in my different topics or at least somewhere on this forum.

There are technical reasons too, but too complex and in an ever changing driver/system/game environment. But suffice to say as long as the game is DX11 and with VR, Threaded Optimisation OFF should give better results for most in VR.

That’s interesting, I’m also a quest 2 user but never saw any impact at all from increasing the SteamVR super sampling… Is there anything special you need to do for it to kick in?

I found my issue, I had been launching steam along with some other apps via a batch file with admin permissions, while msfs was running as my standard user. This stopped the steam super sampling from working somehow.

I will be looking with quest 2 - Can I ask is there any mathematics to reach these numbers, or was it trial and error ? Thank you

I will be looking with quest 2 - Can I ask is there any mathematics to reach these numbers, or was it trial and error ? Thank you

These are for the Index only, based on perceptual measures first and foremost. This is highly dependent on the panel resolution, the lens deformation, the processing of the raw view pixels into the display view pixels etc… As far as logic goes, I rationalize this (and this is biased) that these are integer scale fractions + a little more in order to exploit aliasing at my advantage.

In practice though, between 126% and 140% there isn’t much visual change, the same between 150 and 200, this is why in the end and after having tested nearly all steps by 10 increments (see all my previous posts about this) I finally settle with these 4 for now, knowing 126% was what I used prior SU5 and 152% is what I can use now. The others will have to wait for a 30XX or a 40XX

I shall add than 126% and 152% are giving nearly the same legibility inside the cockpit (with EFIS) but the later is a little better for the outside. If I were using 126% instead of 152% with SU5 I might be able to push some other settings higher, or the fps higher.

NB: 152% and my settings above are a best-balance on this system for now though, well suited so that I don’t have to change settings in flight every time to adjust to the situation while keeping high levels of visuals overall. With these settings the only thing I change during a flight, depending on the situation, is in SteamVR only:

To be honest I am not sure even those cards will help! It is a different headset but I have been experimenting a bit now with additional Steam SS on Quest2, using my 3090. Starting with my standard 5408*2736 native resolution and 100 render scale, I see very little benefit from additional Steam super sampling, and certainly nowhere near enough to warrant the noticeable performance reduction. For my setup at least, my guess is any further legibility improvements on cockpit buttons or EFIS will need to come from fixes and improvements to the sharpening filter and TAA interaction (or even just removal of the sharpening filter at high res !? ) rather than additional super sampling on top.

Light shafts, ambient occlusion have similar impacts on the G2 as well.

As ever Captain, huge gratitude from me for your input on this effort to try to find the right balance for VR settings. I have an Index & 3080ti and a couple of questions if possible - sorry if you have already answered elsewhere, I looked but couldn’t find anything.

@Jonny5Alive6618
Thank you for you feedback and kind words!

@D4EF1n4tOR
I believe this would work then. My approach with SS, since I’m using the Index but also the G2 (well I haven’t for a long time but I used to, and will to at least to experiment and publish suggested settings), is. to have the global scaling fixed 100% (about 2.2 x 2.4 pixels IIRC) so that it is the “nominal” for each headset, and then adjust per-game depending. What matters in the end is the number render pixels.

As for motion smoothing, when I disable it, I however keep Fixed Rate setting (never auto) and set it to 30 or 45. I seem to get these 30 or 45 from my visual experience, but I didn’t launch any counter to counter-verify either. It seemed really 30 on the ground for sure, and 45 in the air higher up as well.

HAGS OFF, Game Mode OFF

Just a quick note: I’ve tried HAGS ON and Game Mode ON and here are my observations:

Having tested all variations of these I have come to the exact same conclusion.

Thanks, I have never found significant difference with HAGS so just left it on (3090). However maybe it is time for me to revisit - anything to reduce that pop in !

On another subject than configuration, I’ve finally decided to publish my mod for the taxi helpers:

This mod replaces the set of Taxi Helpers UI so that you can keep the Taxi Ribbon assistance always enabled. It consists in modifications making them unobtrusive and naturally blending with the ground.

Blending naturally with the taxi lines and displaying only a few meters away from the aircraft.

Displaying almost like ground painted lines as if they are normal features of the airport. 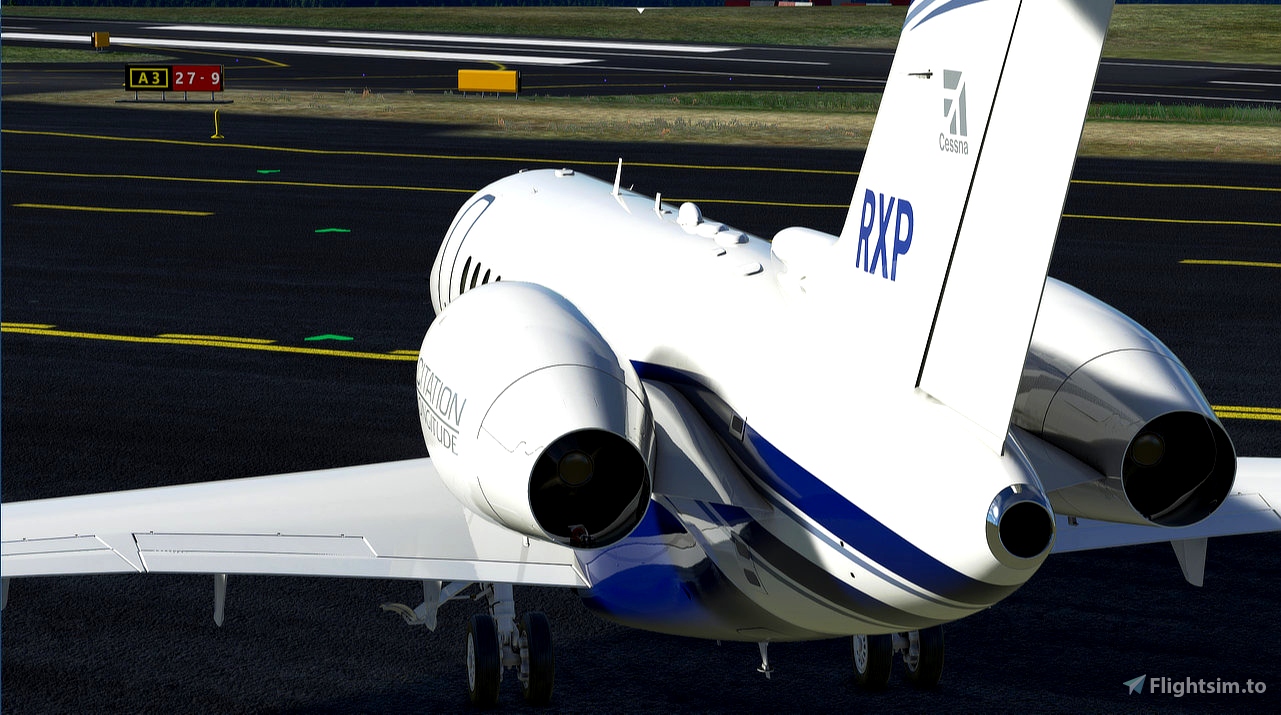 ✓ RXP Small Taxi Helpers (3D/VR) is a Microsoft Flight Simulator 2020 mod created by CptLucky. Download for free to enhance your experience in MSFS 2020.

PS: the screenshots are crops from quick VR captures, I’ll update them with much better ones later!

Very nice idea - the taxi assist is the one guide that I leave on but it is indeed very obtrusive. I look forward to trying this, thanks