Nvidia 456.38 has just become available. Will test shortly with MSFS 2020. I always uninstall my drivers using the DDU tool to make sure that there are no old display driver files or registry entries left on my system. Charles

Report back any improvements or losses with the simulator performance …

Thanks for the heads up, I’ll give it a go now.

if anyone test those drivers please share your thoughts

I downloaded the new driver from the Nvidia website. I have a corrupted display using a DVI cable. I have had to revert to a HDMI cable to get my monitor to work. I do not have a Nvidia Control Panel now! Guru3d have removed this driver from their website! I think there is something wrong with the driver. I am reverting back to the hot-fix driver. As I said, my driver came from the Nvidia website. I will try re-installing it again, (458.38) before rolling back. Charles

The driver is back-up on the Guru3d website, I am going to download the driver from Guru3d and see what happens … NO PUBLISHED FIXES OR ENHANCEMENTS FOR MSFS 2020

Does it say anything about FS2020?

This update is pushed out for everyone but it’s mainly for the 3000 series cards.

No updates for MSFS 2020. I am reverting back to the hot-fix driver because my monitor now has to be turned off and on to get into DVI mode. My monitor is having trouble selecting HDMI or DVI. I hope the roll-back to the hox-fix driver will fix this. I don’t think I saw any improvements in performance within the simulator. Charles

Thanks for explaining that. BRGDS. Charles

The old adage, ‘if it ain’t broke, don’t try to fix it’ comes to mind here. I have re-installed Nvidia driver 452.22 and I can confirm that both Nvidia driver 456.38 obtained from Guru3d and Nvidia stops my display from initialising into Windows using a DVI cable, it’s OK with an HDMI cable. This problem has now gone away. The driver is bad for my set-up. It may work better of for worse for you. Charles

As posted on another thread today, my i72600K, (overclocked to 4.2GHZ) and GTX 1070, 16GB RAM has been achieving amazing performance, see pictures below, taken using the 452.22 driver. Here are my display settings which are quite high for an old CPU. Charles 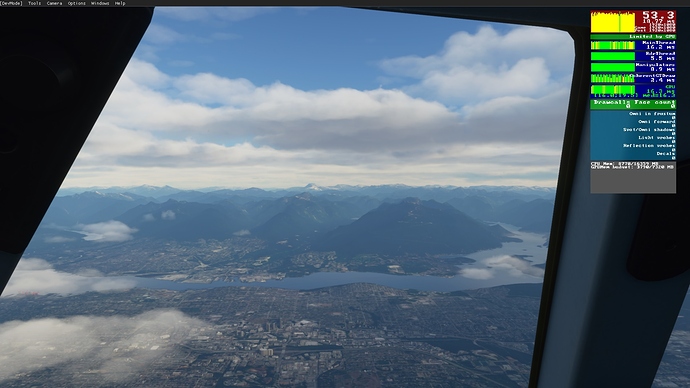 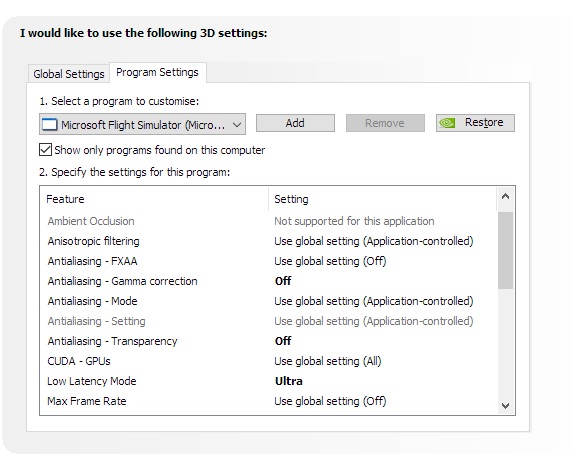 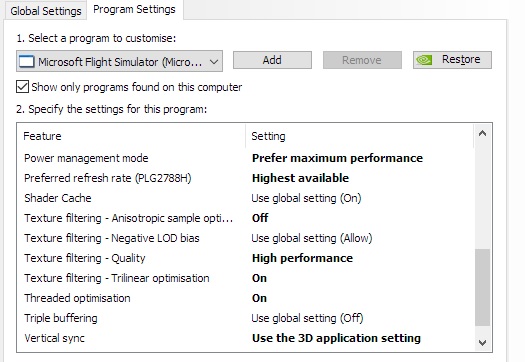 Huh… with lower than those settings I’m at 50 fps around vancouver on a 1080Ti and i9-9900K. Have you turned off live traffic and/or photogrammetry?

I have photogrammetry turned ON and have live traffic enabled. Latest MSFS patch.

HERE IS MY CONCLUSION with regard to the new WHQL driver from Nvidia, (458.38). On my system with an MSI 1070 over clocked and with an overclocked CPU using the same Windows and MSFS settings, THE NEW DRIVER UNEQUIVOCALLY KILLS MY PERFORMANCE. I have spent hours testing this afternoon. I can see a significant gain in FPS reverting back to the-hotfix driver and I can push my ‘Super Sampling’ to 6X which was not possible with the new driver. The biggest downfall for me with the new driver, I could not get my monitor to initialise with a DVI cable without turning the monitor off and then back on. This is a deal breaker for me. I had increased stuttering with the new driver too. This is the second time a new Nvidia driver has caused the same problem with my monitor display. Fortunately, it is rare. I am using the DDU tool remove all traces of my old driver along with the registry entries and then selecting custom install and ‘Clean Install’. Make sure Windows does not roll back to an old driver behind your, ‘back’ This has happened to me several times and the old driver never gets removed properly. Always make sure you don’t allow Windows to download what drivers it believes are best, it always rolls back to an older WHQL driver which is not always what you want. If your not using the DDU tool and are experiencing poorer than expected performance, you can try the driver uninstaller at your own risk. I have never had a problem caused by this little software program. I am sure it allows the best environment for installing a new driver and I think this could be part of the reason my performance is so good allowing a ‘squeaky clean install without older driver files causing problems’. Cheers! Charles

i think twice, or may be thrice windows reinstall nv drivers, i stop it, by one simple way, before uninstall driver i disable internet by firewall settings, then only after reinstall and restart i revolve settings back, from start this practice, windows auto update video drivers has been stopped till today, i guess is couple a years or months i don’t sure lol… i use ddu too, after uninstall in windows restart in safe mode and dduning whatever stay in system… well, i install new drivers too, but don’t play/flight/simulating yet lol

I just pull out the Ethernet cable now to stop Win 10 from ruining driver installs, l don’t use the firewall to achieve control. Although l have changed my Win 10 settings to allow me to have full control, l just don’t trust Windows anymore with automatically selecting a driver. Charles

I just pull out the Ethernet cable now to stop Win 10 from ruining driver installs, l don’t use the firewall to achieve control. Although l have changed my Win 10 settings to allow me to have full control, l just don’t trust Windows anymore with automatically selecting a driver. Charles

Normally Windows only updates its own stuff which either belongs to Windows or to Microsoft products. When you install NVidia drivers from a downloaded NVidia driver package (first deinstall old drivers with DDU) then you should not get automatic driver updates from Windows 10.

This is not true, at least in my case. If one uses DDU or Windows to uninstall a Nvidia driver, Windows always rolls back to an older WHQL driver, a driver certified by Microsoft unless you configure the update service otherwise. DDU has never prevented a forced driver update from Microsoft for me. BRGDS. Charles

Its logical that if you uninstall the driver with DDU, microsoft picks its own so you can actually use the computer (?). After you install Nvidia drivers from geforce.com or geforce experience I’ve never had issue with windows overwriting it. Why do you use guru3d? Do they modify the drivers?

The most recent driver has not boosted my performance more than 3FPS, but has made the sim a bit smoother than it was before after using the 452.22 hotfix and frames are not as jumpy so I’m happy with the results. I did a clean install of the driver.

Using DDU does not stop one from using their computer to the point that Microsoft has to install a driver. Guru3d provide genuine Nvidia drivers. It’s a known fact that Windows overwrites the display drivers when allowed too by itself!

I am pleased they worked for you. Charles