Hand-crafted POIs and bespoke airports consume HDD space that some players may not wish to use. For example, if a player never flies in Japan, they likely wouldn’t want to use disk space for World Update 1.

Generic / autogen graphics and custom, hand-crafted models are stored locally on your PC or console.

Photogrammetry data and ground textures are streamed from network. That’s not the same as the POIs and bespoke airports.

Could the POI be streamed as well though, I wonder. I can’t see why not.

I just think if the ultimate goal is to have a high-quality “earth” that everyone can fly around - “democratized” as Jorg Neumann describes - then it should be 1 simulated earth, constantly being improved, and just streamed as needed, instead of a static lump that gets a country update once every … decade? I get it, it’s a lot of data, streaming is variable, having local data is necessary, yes, yes. But it’s doable. On my phone, with cell data, I can fly around in 3D Earth (from another, ahem, company), with very high-quality photogrammetry with no issues and no local data, so it’s doable. I’m just trying to understand the strategy. Thanks for the replies.

That would be fine if streaming was a darn sight more reliable than it is now. Today I had Azure voices dropping out, Bing data dropping out, Bing images on the Bing search engine news feeds not showing on my phone, even via the 4G connection and this forum loading slow too. Now I am not suggesting it was the MS servers although all these MS things not working correctly is highly suspicious but I do know that it also wasn’t my connection to the WWW so something goes wrong in the pipe somewhere and I for one cant see streaming as the be all until things like this are eradicated.

They likely never will be completely eliminated as there are two many things outside of peoples control. No one entity is in charge of everything.

Exactly hence I cant see streaming being the all in one solution to simming. We need a mix like we have now so that when things online go wrong, we have a fall back option.

If you fly higher you will see what I’m talking about where the entire downtown doesn’t match the bing data that surrounds it. Downtown is a muddy grey while everything else looks normal.

Can you post a screenshot of Calgary from the altitude showing the contrast? I think at a certain altitude it’s just Bing satellite data, which is at best a composite of tracks taken at different times (seasons even) because of clouds or whatever, and stitched together. Even on Discovery Flights (which should be polished) there are locations with obvious and jarring transitions from one satellite band to another. I really do hope they update the base imagery at some point.

If you fly higher you will see what I’m talking about where the entire downtown doesn’t match the bing data that surrounds it. Downtown is a muddy grey while everything else looks normal. 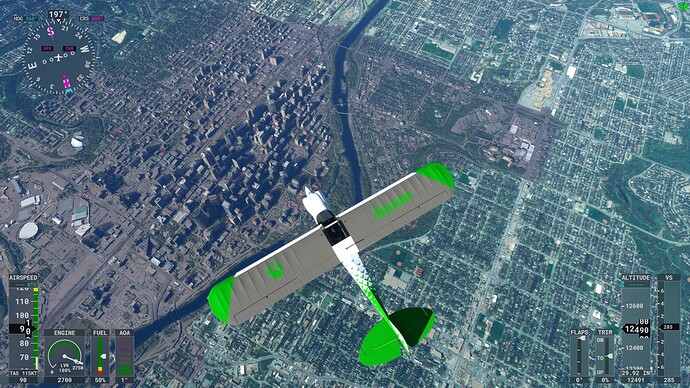 Yes, but I clearly see the brown downtown vs the green suburbs @Paco572 is talking about, with a clear line delineating between the green and brown. I mean it’s impossible not to see. It appears downtown is ‘stained’ brown in clear contrast to the rest. the pavement of the roads should be the same, but are not

The downtown photogrammetry is fine. It’s the rest of the city (non-photogrammetry autogen scenery) that has a green tint to it. This affects many cities (not just Calgary) and there are several existing topics about this (one linked below). The devs have even spoken about it in a previous Q&A livestream.

Roads and streets are green and low resolution Scenery and Airports

Hey fellow pilots, I noticed that german streets looks more like meadows. Since streets are good for orientation its a bit sad they look in this way. Do you got the same problems? [unknown (3)]

Which sort of validates the point - the whole globe has a greenish tint, while the photogrammetry of cities does not - hence the brown stain effect. Regardless of the reason, from a user perspective the result isn’t quite ‘fine’, it’s a mismatch that is widely noticed. It seems that the solution might be to tone down the green in the autogen world (a long-standing request), and add a bit in the photogrammetry, so that they blend together without such contrast.

The color matching problem happens in every photogrammetry city (that I know of) all over the sim world. It is a bit of a problem, yes.

These days I noticed a giant square around Sedona airport standing out from the rest of the city. This contrast thing is really really bad.

I hope this is true and look forward to seeing it. I hope the scenery is enhanced as much the cities/airports. Canada is a beautiful country.

Isn’t this just the same as parts of Google earth? All depends how clear it was and time of day when the satellites were overhead taking the images, they all have to be stitched together as best it can be. Would be no good having bang up to date images if there was cloud cover when they were took. There’s always going to be patches that are different colours like that Google earth or bing maps is no different.

There is already fantastic mesh for BC/Vancouver Island on Flightsim.to. Stutters on SU9 but is working perfectly again on SU10 beta.

I used to have it, but had to delete it do to the horrible stutters in SU9, I’m not running SU10 beta, so will have to see what happens when that drops and how it compares to WUXI…