had a first hotfix ready after only two days

They knew SU5 was full of bugs aboout 2 weeks before launch. The hotfix was in testing by various testers for about a week before it landed. THey didn’t whip up a hotfix in 2 days.

Yes, I think it got scaled down at some point, probably because some people were complaining about it making it hard to fly, but of course that’s the point!

Hopefully as with other things they can introduce a new option for it, so those of us who like realistic turbulence have the option of it. it’s always so disappointing to fly into a monster cumulonimbus painting red on the radar and…nothing.

Possibly related I find cross winds under-represented too, even in a strong cross wind it’s barely necessary to grab and you’ll fly way off course if you do. Cross wind landings should be one of the most fun and challenging parts of the sim!

Could you please fix the lod distance for series s, it is below par in some cities like new York and Paris, otherwise it’s all good

They knew SU5 was full of bugs aboout 2 weeks before launch. The hotfix was in testing by various testers for about a week before it landed. THey didn’t whip up a hotfix in 2 days.

interesting. Were you a beta tester or where did you get that information?
Well, if it happended that way I’m not entirely surprised. I guess, that’s the crux with a fixed launch date, with so much riding on the introduction of a new platform …

Please fix Thrustmaster Airbus TCA pack, some buttons like engine 1 and crank, normal, start are not working properly since SU5

The cloud shader changes introduced in SU5 to attempt to increase their realism under certain lighting conditions are being reverted. This will prevent excess light from transmitting through them, distorting the overall scene exposure level. This will also make them look like they did prior to SU5.

But, now that there has been time over the past week or two to observe these changes over a much wider range of machines than were even available during the beta flighting, it was agreed that the previous shader produces better results in more conditions.

I honestly think the new shader code is much better representing what you’d observe with a n.aked eye IRL, when the sun shinning through is making it nearly impossible to discerning details in the clouds because they are too bright for your eyes.

However the drawback in the implementation like you’re explaining is the global increase of what could be simply described as “ambiant” lighting, therefore reducing or eliminating some shadows, giving what some are also calling a “cartoon” look, etc… I’ve been also wondering whether another factor isn’t contributing to amplifying the differences (Rec.2020 vs BT.709 - see below).

I just hope personally this won’t be reverted to SU4 levels but this will be kept to SU5 rendering with a better balance of ambient/direct and MIE/Raleigh as well (there is another topic about this and haze since SU5…) in order to keep the much more realistic (to me at least) visuals of the clouds and their natural high reflectivity which is blinding IRL.

The main drawback of the increased luminosity to me is not much the clouds themselves, but the metering which is over exposing based on the total render average luma:

This is a problem in 2D and it is even more a problem in VR. This is why I’ve suggested the implementation of a spot metering or a weighted average system instead. Preliminary tests using the SteamVR FOV adjustment is showing me better results in averaging luma on the center quartile of the image (FOV 50%):

Having said this and to keep things in balance, keeping the higher reflectivity would also require implementing this feature in my opinion:

[FEATURE REQUEST] Can you please add a “Sun Glasses” mode

TL;DR: if you’ve already tried looking to the sun in game through a sun visor in an aircraft, the suggestion is to make is a standard option you can toggle with the same rendering principle as the sun visor but in front of the camera eye(s). This works great as-is with the game renderer, nothing complex to add than a follow-the-camera 3D glass material in front.

The difference to me with the exposition problem, before and after SU5, is that the game seems to be "tuned” for Xbox + HDR TV display. Not only many PC + monitor users don’t have HDR capable display devices, but the monitor and the TV might not be using the same gamma either. In addition, PC+monitors are calibrated for sRGB whereas HDR TV are calibrated for a wider color gamut.

“While the Rec. 2020 transfer function can be used for encoding, it is expected that most productions will use a reference monitor that has an appearance of using equivalent of gamma 2.4 transfer function”
Rec. 2020 - Wikipedia

I haven’t done the maths, but your experience in lowering Gamma level to 0.7 seems to reflect the inverse of the change from 2.2 (sRGB) to 2.4 (HDTV).

I hope log book, and world map bugs will be addressed in the future also.

I dont know if its been mentioned yet, but please take a look at the reflection effects on water in VR.
It is awful at the moment, and the only fix is to turn it off.
Can only be described as a moving shimmer along the edges of water areas.

I am not a developer, but my guess about adding/increasing more memory for PC usage will take longer than a couple of days to fix.

The main thing for me is that at least they are looking into these issues and intend to put them right. I just want them to concentrate more on these kind of things rather than bringing in new bug ridden features.

Sound is good, but i dont see any information about tree draw distance. Possible to extend range?

I am very pleased to see such an extensive list of issues being addressed in the next hotfix. Thanks to MS and Asobo for responding to the legitimate concerns of the sim community.

Thank you for the update and communication with our community - much appreciated.

Unbelievable: no mention about live traffic?

I would think that is a priority considering:’

That means nowhere in the whole sim are aircraft taking off. They are also missing nosewheels, hard to miss. Lights are missing, easy to recreate at night. You can’t see the aircraft. There atleast is a workaround for that(CRUNCHIE)

CTD: crashes should ALWAYS be a priority. Temperature, sure fix that. Fix that yo yo looking thingy. Fix the washed out Mona Lisa photo in Paris, but if people are crashing to desktop…THEY can’t play…simple as that.

This shouldn’t be fixed at SU6 which is 6 weeks + away. Crashes need to be fixed now, as well as live traffic taking off. Waiting a whole future Sim update to fix things messed up during the pervious sim update makes little sense. That just always keeps us moving 2 steps back for every step forward, which is how many seem to feel.

Speaking of crashes, putting on live traffic increases CTD’S, especially for those of us using FSX/LEGACY models. MDL files crash us. Please fix this issue, considering ASOBO has no alternative matching models and liveries.

Unreal weather, help their mod to work. Its a fan favorite and has not worked since SU5. ASOBO should support their developers.

I’m very glad Asobo has taken a stand here after almost 10 days filled with so many extremely negative and unfair posts, hate and destructive energy

Telling other people that their posts are negative is actually an example of a negative post. I honestly think many complains arent warranted about “wanting new things”, but when you mess up what was working you better be ready to work 24/7 to fix it. You think DICE is gonna wait 10 days in silence if their multiplayer doesn’t work when BF 2042 comes out?

Be real, most gaming companies know they have to achieve min performance to survive. EA made the mistake once before and their stock dropped and their own shareholders sued.

Great to see most of the issues being investigated and addressed. I’m hoping the UI gets fixed too as currently my mouse cursor disappears when panning using the joystick hatswitch after SU5.

I’ve seem similar UI/mouse issues mentioned on the forums so hoping that’s picked up under the ‘other issues’ section.

@Jummivana Can you please add to the list that the aircraft customization page does not remember settings, callsign, reg and flightnumber?

Could we see something that addresses the issues of the Landing Challenges or at least get some updated SDK information? All of them on the FlightSim.to are broken and they are a great resource for some fun ways to fly. 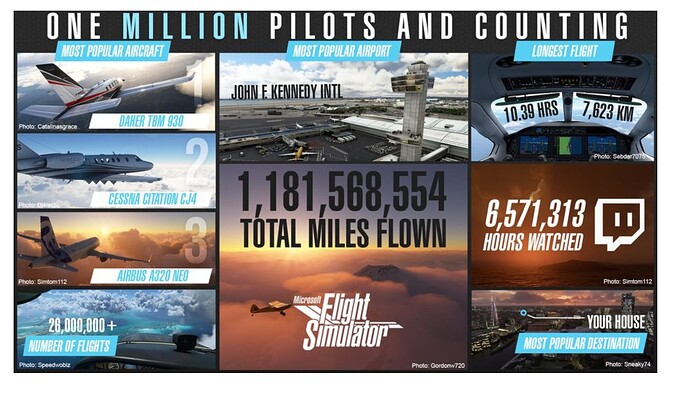 This 2nd hotfix and subsequent fixes as announced will take care of most shortcomings the sim has for me at the moment. Thanks for the detailed heads-up.

To me, your post is a well-received confirmation how serious you are about the FS2020 project…

I love this sim and I am very much looking forward to the improvements and fine-tuning that will come in the next couple of years.

What a journey that will be!
Count on me for continued support and feedback.

The funny thing is I think the vr was better the very first day I was in the vr beta then it is now.

I am very glad to see the effort of communicating and acknowledging the train wreck it had been for some players. Makes me have hope for the future of the simulator! A couple things I hope to see addressed is the bugged controls menu, the bugged customization menu, as well as the changes to the aircraft trim. i.e. patch notes on changes to how it works, seems way too sensitive now. I’m not sure if it’s a bug or was intended.