I already reported this to Zendesk (because that’s how they fill their bugtracker) but it is quite astonishing that the current snowcover in the most part of Europe is not shown in the game.
If I load up my local airport in the north of The Netherlands I do not see any snow. But the snow is there when I look out of my window and it also visible in Meteoblue.

I am getting the same issue for Toronto in February (snow covered everywhere, but sim is green). Has this been resolved and maybe I’m doing something wrong? I am selecting Live Weather and I have deleted and created a new cache.

Checking my own local town, Brantford. It’s been snowing for days Brantford Snow1920×1080 429 KB
It’s showing some snow, yet outside everything is white, except most of the roads… ploughed and salted. The trees are of course not green anymore and the snow is all on the ground around them. Fields are not green anymore either and covered in snow. There’s ice floating down the river with sections frozen, along the shores mostly.

Heading to Toronto it looks like PG areas are not affected by snow at all, Burlington 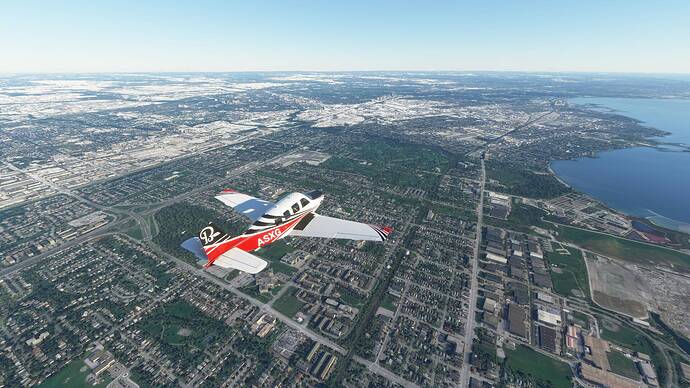 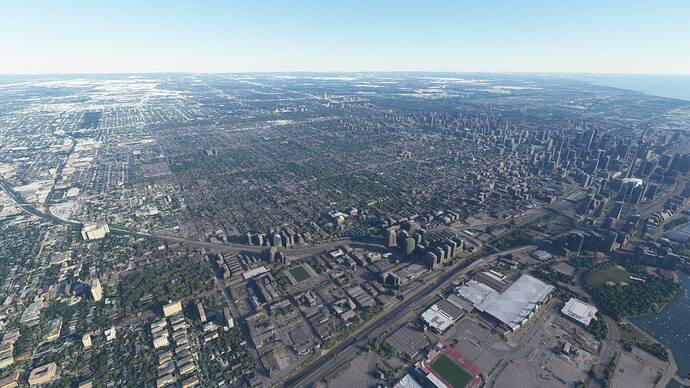 Trees and grass should not be summer green. Major roads and most city roads should be clear of snow. Fields and roofs should all be white. This is pretty much the opposite of what it should look like 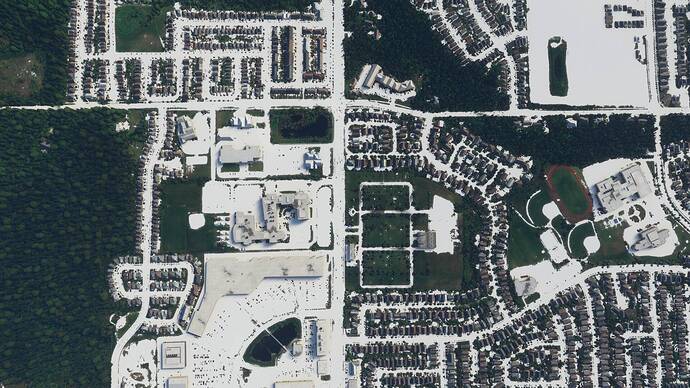 The only thing you can do for now is to to select Custom Live Weather, and then when in the Simulator, add the desired snow cover on the ground. Though a couple of times Ive had that not work either. But until the foliage on the ground changes colors and or drop off the trees I dont see snow ground cover getting better.

Sometimes Chicago is covered by snow, sometimes when snowstorm is ON, it’s cleared sky’s

There is an evolution : we had snow but no ice over lakes in january here in Quebec city (since end of november IRL) and now lakes are covered.

Planes are landing on ice with skis here and we are now able to reproduce it. Good news !

However, can’t find any plane with skis for MSFS, if anyone has a clue…

You could try the ICON floats and see if they might work as ski’s other then that no in-game option to equip ski’s. Might be some 3rd party out there but I havent seen it.

LOL me too bummer eh? After the update use live weather and then fly out of hopkins or burke and head east as you get further east you should start seeing snow appearing on the ground. I was flying yesterday and was seeing bands of lake effect snow here and there, and snow increased from cleve to Eire significantly.

Then next flight same flight diff plane…loaded…it was clear and sunny and snow go bye bye!

LOL Im retired, I need pontoons for my caravan I fly South! ;p

Seems completely broken right now. NY/NJ no snow cover showing. We’ve had about 3 feet over the last month or so, and there’s at least 8-12 compacted on the ground, but nothing in the sim (except some frost on some grass?) next to GIANT taxi signs.

This sim continues to be frustratingly unpredictable, and not just the weather. 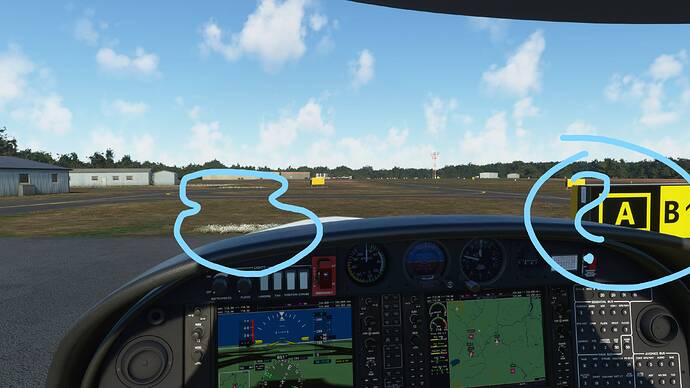 Is there any word on clearing snow off of runways at larger airports that would have snow clearing crews?

Is there any affect on wheel brakes if a runway is covered in snow? Ideally there would be, but until they get the snow off runways that wouldn’t be allowed to be snow covered, probably for the best if it didn’t effect braking distances.

And is there any talk of changes so snow acts at least semi accurately to altitude? There’s almost never snow on the ground here in Vancouver, but very close to the city there’s snow on the mountains all winter long. I have found NO way to have snow on the mountains and not here in the low altitudes around the coast and city. There really should be a “snowline altitude” setting in addition to the simple depth setting. Ideally, even finer controls than that, but at least those two settings, snowline and depth. Maybe two pairs of settings. A low altitude and depth and an upper altitude and depth to control the gradient from the first bits of snow up to a “full” snow altitude.

Between this and the snow covered runways I’ll probably almost never use snow. Which is very sad. I’d love a decent snow implementation!

Snow has desapeared here in Quebec city in the sim, one month before real time. Same for ice on our lakes which were melting one month and a half sooner than IRL. This is lake Sept-Iles CSP8 on March 14th, a feel that we have by the end of April in RL. 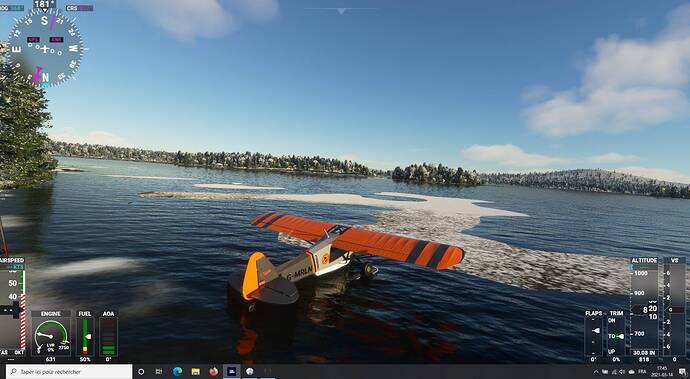 in european Alps we have a climatic problem with retreating glaciers, higher and higher temperatures, each year less snow than before, but it seems we have solved the issue.
end of April and as soon as you reach the mountains you enter in a frozen realm… 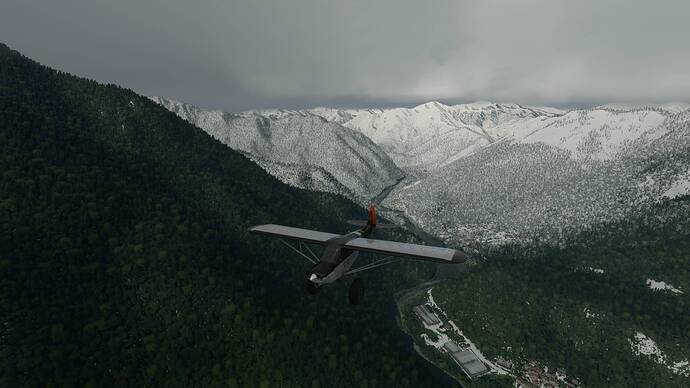 I confirm, we are nearly end of april and the simulator depicts still deepest winter in Switzerland (screenshot near Sion Airport). While there may be still some snow on top of the mountains, the valleys are green now… 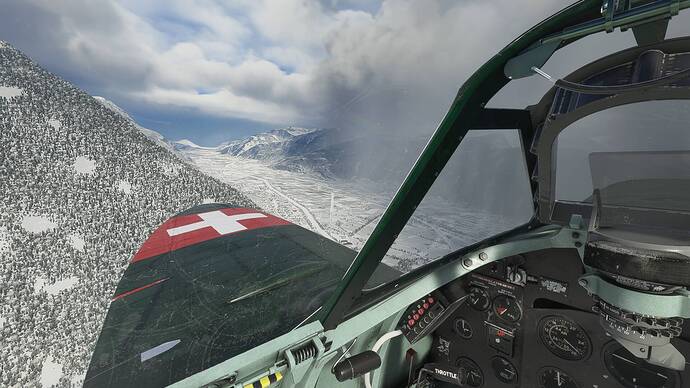 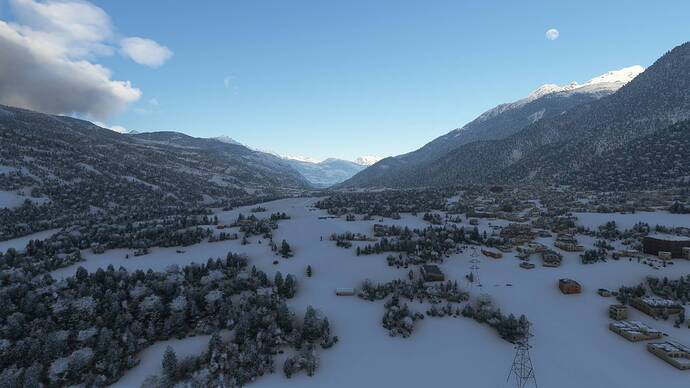 this is how it should be (using preset weather) 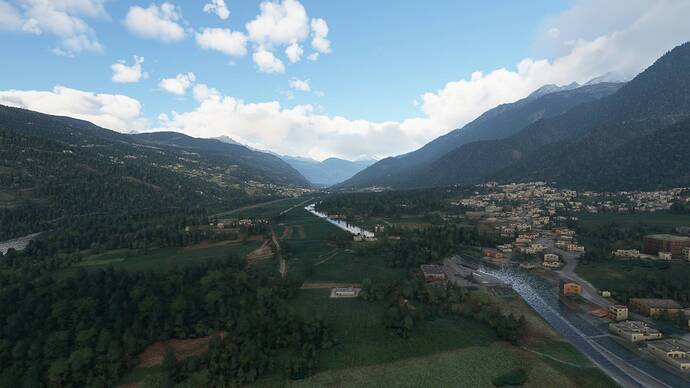