I feel sorry for people whose priorities with this sim lie so deep entrenched in this graphical degradation that they seem to spend most of their time thinking about it and hunting for examples of it. That particular example comes across as something that I would describe with a word that has 4 letter, starts with an a and ends with an l.

With all due respect, from your previous posts I don’t think you do feel sorry for those people. I think you just want to antagonize. I don’t get the attitude that says, “It works great for me, so screw everyone else.”

I am just tired of all the BS.

Can we please dispense with the string of personal attacks? Getting a bit off topic with some fun is one thing. This though… Not cool.

Then don’t go visit a support forum where people want help, vent their frustration etc. Take a break or focus on where you can really help people with your experience. I really mean it in a good way. It’s not making you happy seemingly and it creates further argumentation. But I want to “practice what I preach” and not tell you what to do or not. Just a thought. …

Whatever the reasons, Asobo code changes or NVidia drivers or even Windows updates, there is a very visible bug if not for all, at least for some (follow the link for videos) which you can try to repro like this

It is just that with SU5 it is more visible and most likely because of an overflow computation of some sort, or just this bug in the Shader code

NB: you can also see the same bug in a different way:

And i pointed to my co, thought i see something shimmering down there, and he looked and replied to me it was someone with a mirror.
As we flew on we reported to control the location the shimmer.
Later we got message that there where 5 hostages saved who where held at there huidig.

The reason for such complaints are probably people who bought this game because of the advertised incredibly photorealistic graphics, which were delivered at the beginning, but nowadays can’t keep up at that level anymore.
Such findings are, after all, only proof that their concerns are based on a kernel of truth. In my opinion, these are just perfectly legitimate objections from a group of disappointed people.

And in the end it only serves to improve the gaming experience for some again, but not to worsen it for anyone.

I would rather feel sorry for those who constantly try to protect a manufacturer and reject any approach of improvement suggestions and criticism while not gaining anything from it.

It’s the real simulated McCoy. I’ve never been to Watrous, Saskatchewan but I hear it’s lovely this time of year

. Here’s a couple more from different angles. Been taking a lot of “artsy” shots of places for a side project. Also, the radio masts come from the amazing We Love VFR free add-on. 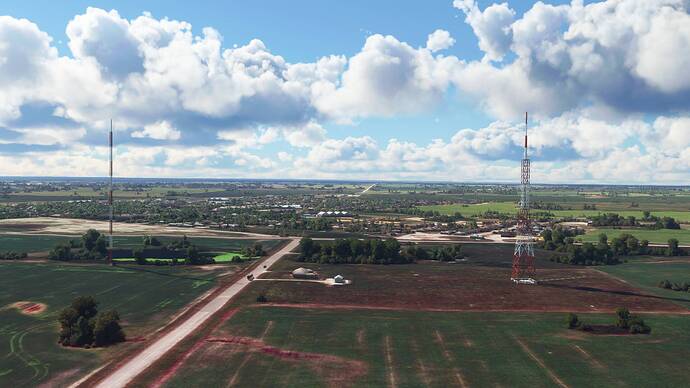 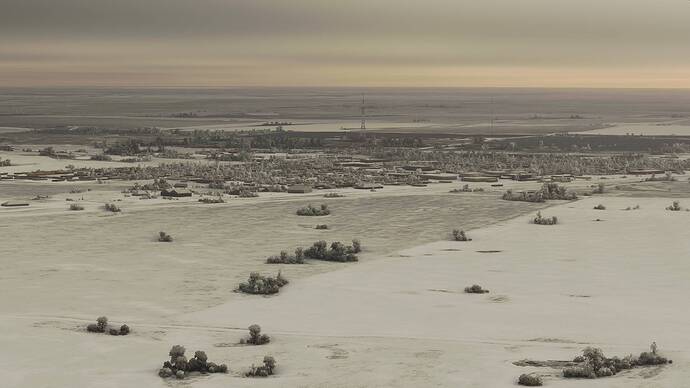 This is just one more example of the UP5 downgrade. I noticed it immediately after starting at a fuel pump. After almost a year of using the sim one can quickly tell when something is different.

People ask for before/after shots yet when we provide them we get told it’s no big deal and that we should simply shut up and be grateful.

Unfortunately my vision is not too good and need corrective lenses. (Think of the Mr. Magoo cartoon character.) Honestly, for me when it comes to looking at before and after photos I often find it difficult to quickly spot differences. I think that the differences would be much more noticeable while looking at a video stream.

This is a big deal and needs to be fixed!

Wait, so you took screenshots of those objects before…for what reason?

FWIW, nobody complained more or more loudly about SU5 than me. I’ve been on both sides of the “it works great for me” and “it’s god-awful” divide. I will now forevermore have empathy for those facing performance problems or visual deg issues. I was away (staying near TNCM watching planes, ironically) when WU5 came out so I first tried it this week. It seemed better to me, but not amazingly so. Then I did a few things - changed some NCP settings, and also set up Freesync on my monitor even though I have a 1080 - and it was like when Clarke Griswold plugged the house lights in again in Christmas Vacation: the sim is now just beyond gorgeous, again (“Dad, dad, you taught me everything I know about exterior illumination”).

I don’t know which of the things I did gave me this result. In retrospect, I was too hard on Asobo (not that they’re crying into their beers over what I say on here). They have earned my patience and trust. And I’m very happy with the sim now, but I will never discount the miserable time someone else might be having. I’ve been there, and it’s not a good place to be.

Even encountered light turbulence most of the trip.
Would have grabbed a video of the approach into CYDQ, but got busy. 40 knot winds and rain squalls, well after dark. Was just as expected as compared to real life flight. (I make this trip at least monthly in a Baron. The sim isn’t far off.) 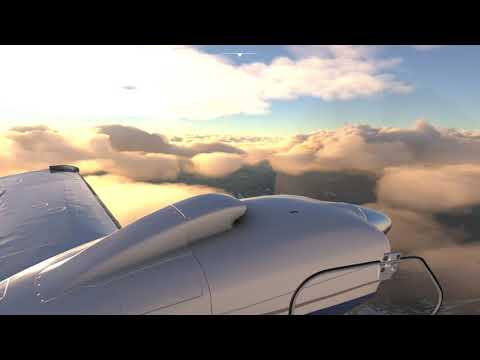 Some said it’s really depending on the time of day, clouds form etc
I did a flight yesterday, clouds were nice and suddenly, they turned into some ultra pixelated garbage. (kind of the same as when there’s a lightning strike).
I have no idea why this is happening.
They also look more flat and transparent than before and with some not so nice purple/pink banding (this one can be seen in your screenshots).

Long story short, they looked better before. Might be a simple bug that causes this since Asobo (or was it Jörg?) said that they haven’t changed the clouds a bit. 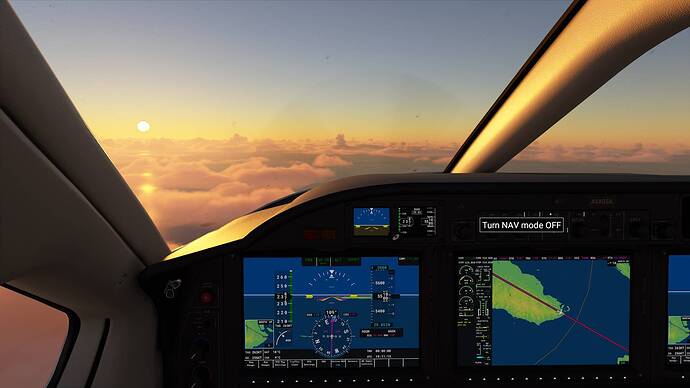 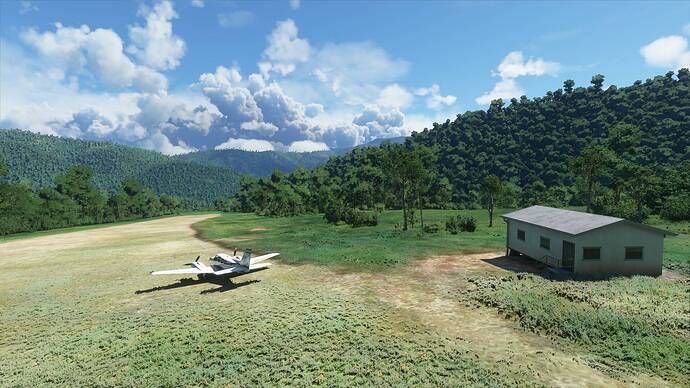 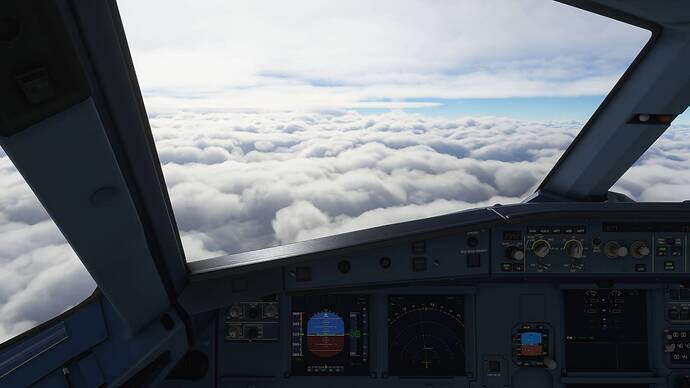 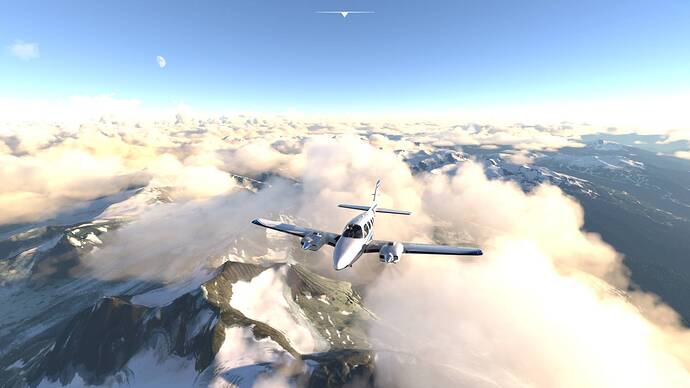 Sometimes I get amazing graphics including clouds, but most of the time, it looks like this…

Screenshot from just now, I am sorry but these clouds are just not ULTRA. They were way way better than this, it looks like LOW setting at best. It really lets down the rest of the sim, ruining immersion. 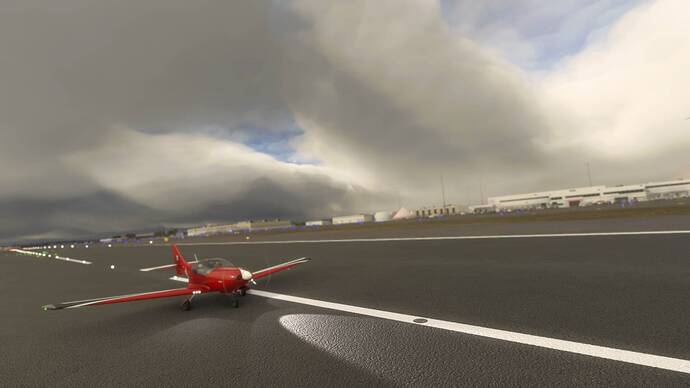 yep, broken record. just not the same. I wonder if they are contemplating fixing it?