This is a bug exists since the first version with VR.

There exist a number of bugs with the rendering which all seem unrelated but might have the same root cause (maybe):

Yesterday I’ve seen these bugs are still present but I came to realizing they might all be rooted to the Shader code handling and use of the viewdir vector (directly or indirectly) and I’m further documenting it here.

There exists visual bugs which are solely dependent on the view dir vector and nothing else, and they most often than not exhibit themselves on the right eye only in VR.

The same visual bug can also be dependent on the combination of view dir and sun dir, and this shows especially well when looking at thin bright features in VR, like windmill poles. When lit by the sun, there are different view dir angle which are revealing (light) or masking (shadow) the pole in such a way they sometimes disappear from view or they are too faint.

When circling around the aircraft

When just turning the head to the right 45 deg

The Shader code in VR has a bug which doesn’t show in 3D! 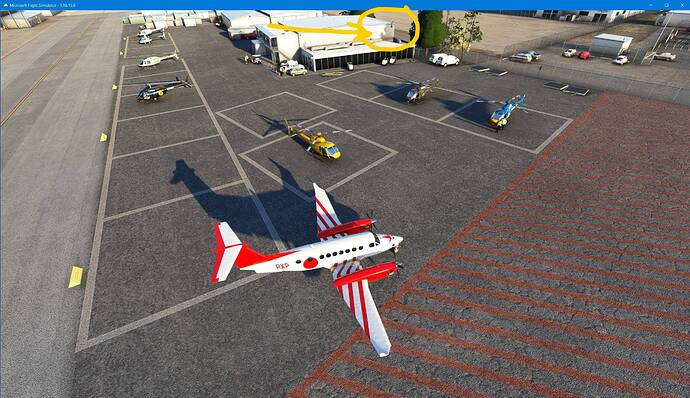 Opaque quads protruding from the cabin window depending on view angle

Light visibility and size unexpectedly cut with zoom and angle

Do you have any add-ons in your Community folder? If yes, please remove and retest before posting.
Are you using Developer Mode or made changes in it?
PC specs for those who want to assist (if not entered in your profile)
Are you on the Steam or Microsoft Store version?
Did you submit this to Zendesk? If so, what is your ticket #?
n/a

Yeah this is really anoying this needs fixed ASAP

To be honest, it also shows in the non vr view. It definitely is a bug imho, no doubt there. The difference i’m noticing it’s the effect is amplified in VR.

It definitely has to do with angle, as it looks like these shadows shaders are possibly getting the angle as an input var, as like you stated with other items (cloud, masts)?

It looks like to be an overall thing where there are possibly wrong (or intended) angle input parameters used because:

In the TBM when i zoom out in the cockpit like this: 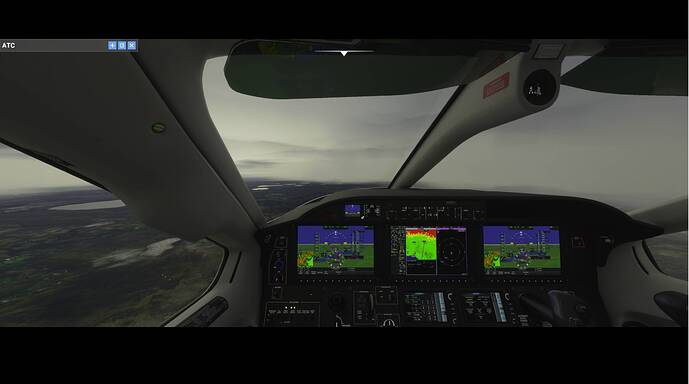 in which i normally fly, i notice that at certain angles activated buttons are not lit anymore (autopilot, but also parking break). I’ve also seen papi lights change color when panning up or down from an apron.

So it looks like a general input somewhere in the code hierarchy already been passed on before it reaches any light/shadow shaders.

Edit: Will try to reproduce my TBM case and add it to this post. Give me couple of minutes. 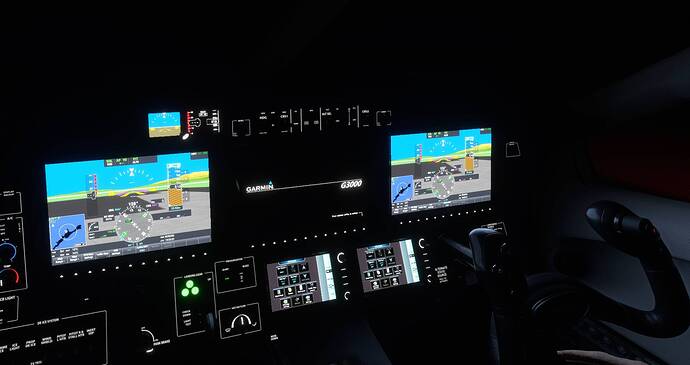 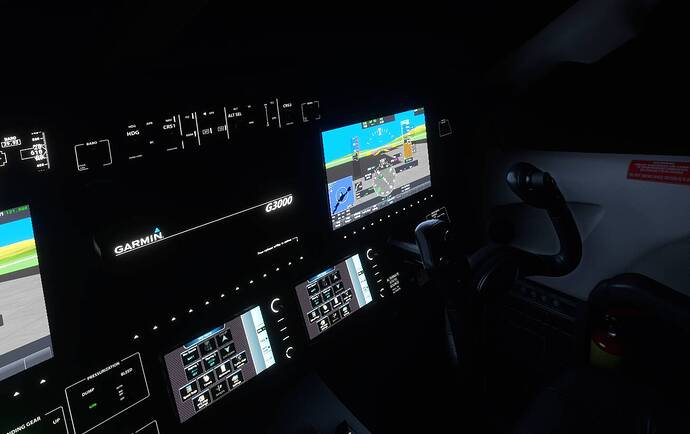 notice that at certain angles activated buttons are not lit anymore (autopilot, but also parking break). I’ve also seen papi lights change color when panning up or down from an apron.

This is another bug to me, that I’ve documented here:

I have a fairly good idea about what is happening with this bug though, and like I told Jayne, I’d be very glad to discuss this directly with Asobo because I’ll probably lack the words in English and this will be easier and faster than writing this down anyhow.

You are thinking of z-index fighting? (i know i do have these issues once in a while when calculated wrong

Cause that could also cause this if overlaying (possibly in this case a self emitting?) plane on top of an other object is not exactly placed.

This example is from my experience when working with objects and planes. So, i could be completely wrong as i do not know how asobo has modelled this.

Well, what i see happening while moving, is that the light gets removed partly from top to bottom from my “sitting” angle

Looking at this from the side.
Red = object
Green = Emitting plane (object whatever

This is really overdone (especially the emitting plane’s angle), but hence by example. The distance between object and plane is (let’s do it in pixels for fun and keep it easy) on the top is 0.009 pixels and bottom is 0.010 (yes, below a whole pixel)
Top to bottom view angles horizontally (aprox):

With every camera movement the position get’s a bit “adjusted” in this case it shifted let’s say 0.002 pixels, that’s with all objects. But if the spacing is so close, a small adjustment can make it appear/disappear. It needs to stay within the camera view, hence the camera is not ortho, so there are angles (sin/cosin with perspective camera, hence it comes back at bigger angles). This also happens when you zoom:

Do you notice the BC label disapeared? It “fell” back inside the BC button object.

But again. This is from my experience when layering planes on objects or having two objects placed exactly at the same spot (what do you show when they are exact placed?).

Now i think of it, z-index fighting feels like a plausible cause. because i did not notice before the BC label had dissapeared in previous views. It’s easily reproducible, just zoom out.

Edit:
When watched closely, you can see the plane/object when it’s emitting properties are turned off:

In below example i circled the self emitting plane/object

Zoomed in when lights present 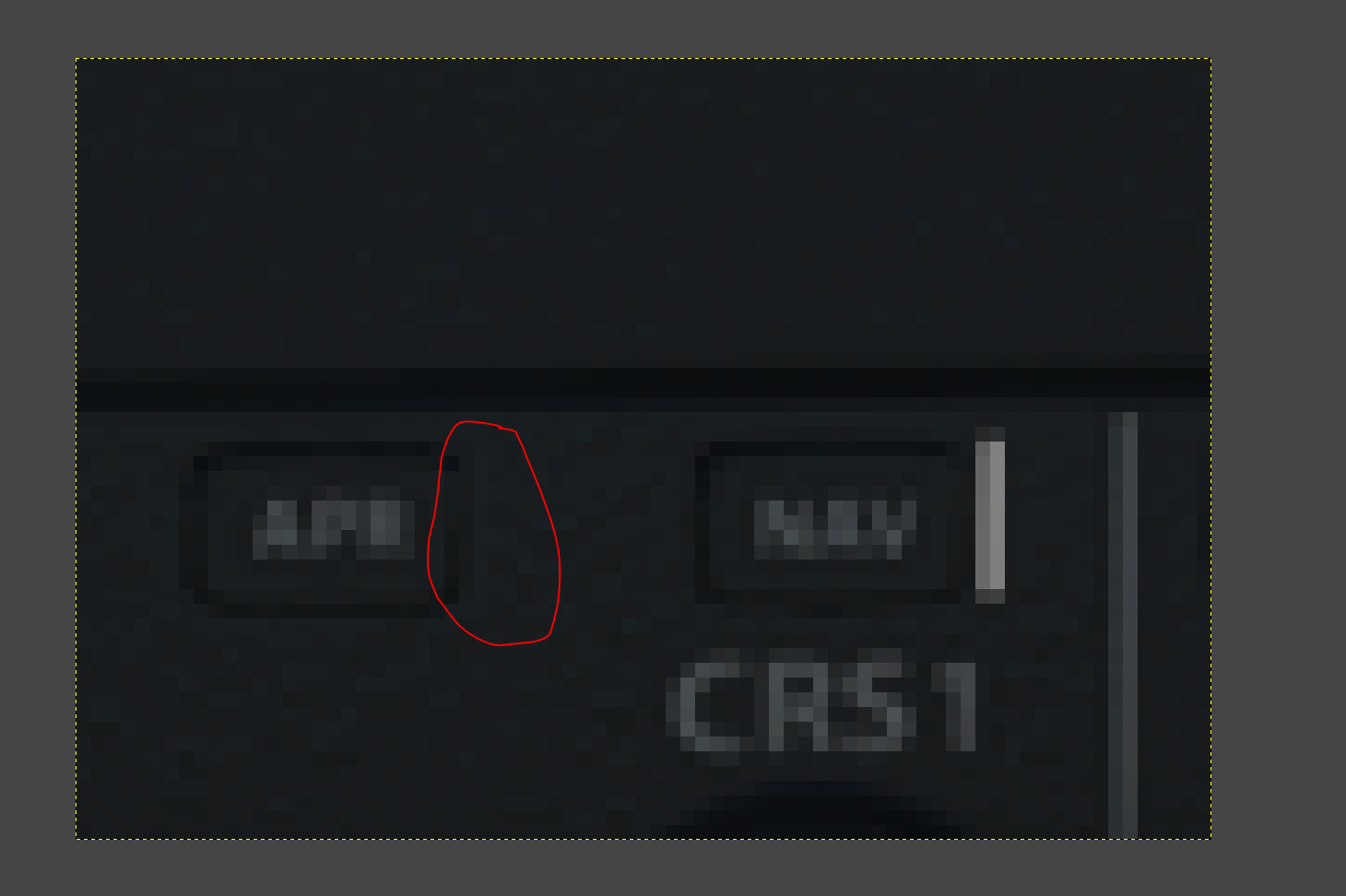 Zoomed in when lights gone: 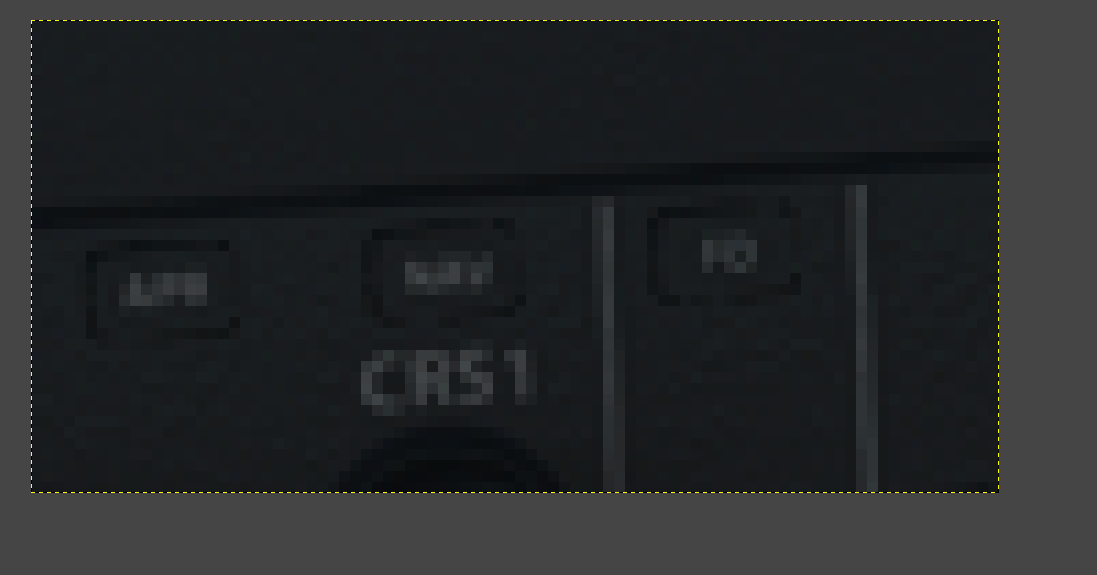 My appologies for hijacking because of my earlier brainfart.

I checked the other post and understand the logarithmic calculation.

There is one thing, all items bound to the logarithmic value are still in relation to eachother. Which means the relation between object sizes, distances and calculations all stay in equal relation as it’s al based on that one single factor.

If i have objects within a group, and i change the lod of that group, all objects inherrit the same lod properties. An airplane is a group of objects. Even when it’s all bigger, everything grows equal within that group. When scaled down to respect the viewport/distance from eye in relation to world placement (albeit with more detail because of higher LOD), everything is exactly the same size/distance etc as if it would had lod 1.

But again, it’s my experience when doing 3D views. So i can still be utterly wrong here

as i do not know asobo’s approach.

P.S. which part of the interview are you refering to?

Edit: I think we are talking about the same thing, z-index fighting is a result of object placement

If I have objects within a group, and i change the lod of that group […] When scaled down to respect the viewport/distance from eye in relation to world placement […] everything is exactly the same size/distance etc as if it would had lod 1.

But from what I can understand you’re pointing to something which is not working as you’d expect here. I believe I’d probably explain this better in French on the phone with Sebastian, than trying to write it down in the forum too.

Thank you for noticing this. This probably explains the AA downgrade people are claiming. TAA wasn’t touched in SU5, it was actually this other issue causing problems. I’ve also noticed the odd behaviors you describe in VR since it was first released. Perhaps it also explains why turning you head to look at a parked plane sitting next to you shows the windows of the parked plane changing appearance (as if you can partly see the plane interior and then you can’t) or seeing part of a tree disappear and reappear out of the corner of your eye while you turn your head. Would this also be responsible for landing gear not appearing on autogen parked airplanes until you’re almost on top of them? Or is that a separate issue with LOD distance switching? I don’t notice the phenomenon in 2D, only in VR. It’s things like these that ruin the suspension of disbelief in VR (photogrammetry popping in and out constantly under your plane is another one).

I’ve noticed that light pollution rendering is totally messed up in the right eye. Light pollution changes depending on the angle of your headset, maybe my post should be merged :

And I just came to realize these bugs in VR might just be due to this: