tldr; need pitch control on the water so we can realistically simulate takeoffs, landings, and idle/plow/step taxi.

I recently got my real-world seaplane rating in a Cub so I thought I’d try the seaplanes in-game - namely the Cub Crafters X Cub at Renton Municipal Airport (KRNT) and the adjacent Will Rogers Wiley Post Meml. Seaplane Base (W36). The water physics in-game is a bit unrealistic and needs improvement in takeoff, landing, and taxiing.

Starting with takeoff, in-game it feels like the seaplane skates across a flat slab of asphalt rather than being on the water - the surface seems impenetrable and the aircraft’s pitch attitude can’t be changed. In real life, takeoffs are started with the stick full-back and the nose immediately comes up to a high pitch upon application of power (think cowl on the horizon, if the cowl is normally well below it from the pilot’s perspective). A moment later, as the floats are ready to come up on step, the nose rises farther (the ‘second rise’). From here for a normal takeoff the pilot releases back pressure to keep a slightly nose-up attitude. There is no rotation like in a landplane, the seaplane flies itself off the water in this attitude. Long story short: managing the pitch is really important. In the sim, because pitch angle can’t really be changed, a real-world takeoff can’t be replicated. With some back pressure, the seaplane seems to rotate and jump off the water all at once, which is unrealistic.

For landing, I have to say I was pretty impressed with the sim’s glassy water effects - you absolutely cannot tell how high you are off the water, exactly as it is in real life. My main comments for landing are similar to takeoff - there’s no control of pitch once you get on the water and it feels like you hit a slab of asphalt. In real life, you touch down in a nose-high attitude similar to how you would in a landplane, but in a seaplane, you then keep the nose up after touchdown, maintaining a high pitch attitude and slowing yourself down. Because there’s little pitch control on the water in the sim, this felt unrealistic, like the airplane slammed down and forced itself to a level attitude.

Some of taxiing has already been mentioned in a previous post - lowering the water rudders doesn’t add extra steering authority when it would in real life. It also seems like after a couple moments of idle throttle, the seaplane comes to a complete stop in the water - in real life seaplanes are always moving on the water, with idle power enough to taxi at slow speeds, and even too much if you’re approaching a ramp, beach, or dock. Even with the engine off, the seaplane can be sailed using the wind (note: I have not tried sailing in-game). In-game, idle taxi is not possible without adding a bit of power. Plow taxi (high power/stick full aft) is not possible due to the lack of pitch control on the water. Step taxi is similar to a takeoff but executed by removing some power and staying on the water - it relies on similar cues to takeoff, so it can’t be replicated realistically.

I hope this doesn’t come across as nitpicky - I was really excited to see more seaplanes come to the sim, so I just wanted to offer my thoughts in the hope that the physics can be updated to offer a really realistic experience in an amazing segment of aviation. I have not submitted to Zendesk yet.

Have you been able to beach a seaplane in MSFS?

Please, take an effort to submit this to Zendesk, although I doubt it will have any effect.

My real-world experience is limited to straight floats, and from that perspective beaching was pretty realistic in the sim, the aircraft wedged itself up on the shore and stuck there just like it does in real life. I did find some strange behavior with the wheels on the amphib floats and trying to taxi up on land though.

I also did some wind effects and sailing testing on the water, and it doesn’t feel like there is much, if any effect in the sim (the airplane will weathervane in real life). I’ll go submit all of this to Zendesk.

So did they make it work? At least, somehow. I remember previously the sim just wouldn’t let you extend the gear while sitting in the water.

You can extend the wheel while still floating and roll onto dryland now, I did it many times.

it’s from first version, object on the water in the game highly “gyroscoped”, and that’s sad fact, and when i said objects, i mean anything, so i don’t get carrier addon, strange thing, because in fsx with this never was any problems, remembering fsx mission in south america, for archeologist lady

Great analysis. By all means send this in to Zendesk. Without great feedback like this, the dev team have a much tougher time improving the sim!

Dont know if this is the precise category to be in, but have discovered that since WU6 the landing gear on floatplanes don’t visually appear to retract after the gear up command. The cockpit view and indicators show the gears are retracted but if you look at the external view they don’t move. Tried with/without mods in community folder but still not working properly even in stock selection. I’m using G1000 NXI option if this has any influence, not sure. Despite the external appearance, water landings all work properly and the water rudders deploy normally. Just another sneaky bug after latest update?

Exactly what this feels like in game! Hope this can be improved.

Glad you bumped the topic up. It was almost forgotten (18 days since the last post), and I have missed it. Water landing realism is important, maybe not top priority but important especially now that many very interesting and popular floaters are coming to the sim (PC-6 porter, DHC2 beaver, Twin Otter). Voted.

I too dearly wish for the water physics to be brought up to par; For waves to be real and the water to not feel like wet asphalt. I put in my vote, and I’d strongly encourage you to put this to Zendesk as well if you haven’t already.

I will at least give them credit for fixing the Icon A5’s water rudder effectiveness. Now the plane can at least maneuver (in water) with wind without constantly weather-vaining. So there is that.

And there is now a visual wake while in water too.

Water physics are a mess. I bought the Bird Dog for the float model and taxying on water is so bad that I burst out laughing. Thank goodness for the above fix. It has made the Cub my favourite aircraft on floats.

if anything it feels like the floatplane / water physics got a little worse after ( SU5? )… before it was clearly placeholder and whatever… but now it feels pretty brutal & clunky, like you’re landing gear up on concrete…

Everyone is so turbo about getting helicopters and gliders in the game, but we’re getting a lot of floatplanes and amphib add-ons right now and none of them are fun to operate on water. And the VFX could be waaay better. I’d really like to see this on the regular roadmap, and get consistent updates to water / float planes.

I’ve got a commercial helicopter and seaplane rating ( in addition to land ), and seaplanes, IRL, are a very close 2nd to helicopters for being the most fun to fly overall.

Great comprehensive list. I hate to say it, but this is one of the areas that Grand Theft Auto V circa 2013 does better than Flight Simulator, which has:

I wish they had held onto floatplanes entirely until they were ready to knock it out of the park. Could have been a big splash with a major sim update or expansion pack.

Could have been a big splash with a major sim update or expansion pack.

I’m basically really happy with the way things are going with MSFS - generally in the right direction and my experiences are 95% positive. I think devs have been pretty good about transparency as well.
But.
I’ve been bummed with the implementation with some of the “long awaited” features… ie wait for 6-12 months for a feature that was announced, then it’s delayed a little bit, and when it comes into the game - it’s like 1/3 implemented. Then there’s no real acknowledgement for fixes that need to be made or a specific roadmap for improvements to that feature.

There was talk of a pass at improving the floatplane model when they added a bunch of float variants and the wake FX. I think all that really happened was - they fixed crash with ramping. If anything, it feels a bit worse IMO. And the long awaited wake VFX is mostly a let down. ( They should really dedicate a few artists to wake, snow, smoke, dust, rain, splashes, vortex trails, condensation etc and just nail it - they clearly have a bunch of talented people )

It worries me a bit if floatplanes are kinda in, but not really working - that the same will happen to helicopters and gliders… It will take longer than expected to come in, then be half-done and will need another year or 2 of updates to really get it to where it should be. Helicopters are very very hard to get right - it’s almost like 2 totally different flight models that blend together - both physics and flight controls.

I’d be much happier if they finished floatplanes to a 90% quality level and build up some confidence, before diving in on helicopters ( and trust me, I love helicopters ). I know gliders are being looked at by an external team, so fair enough.

The trouble I have with float planes is the bow wave is small on landing and take off. The wake left behind is somewhat realistic. Example screen shots below. 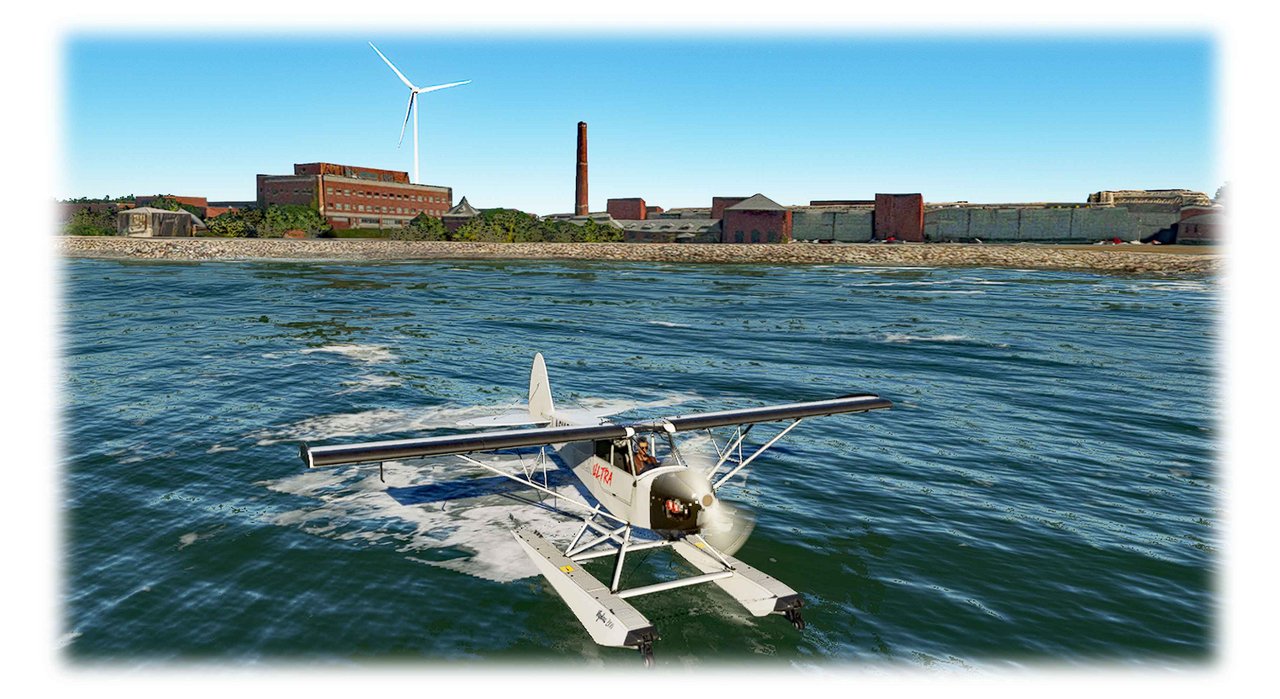 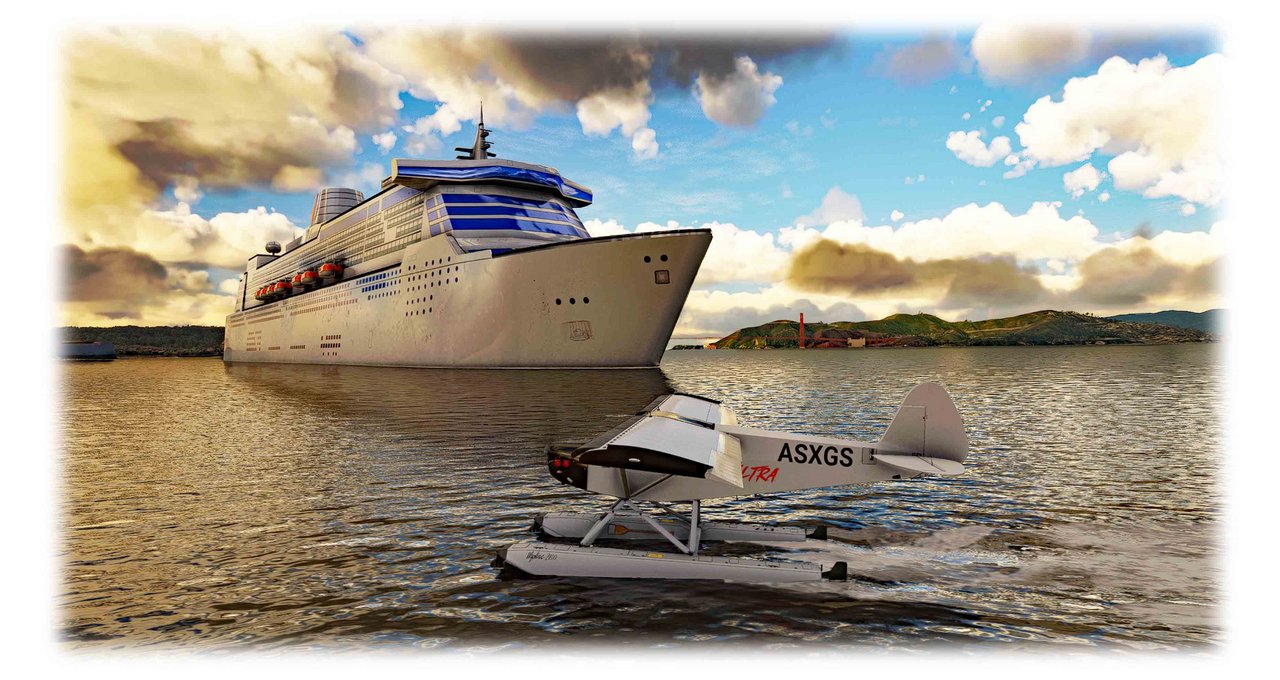 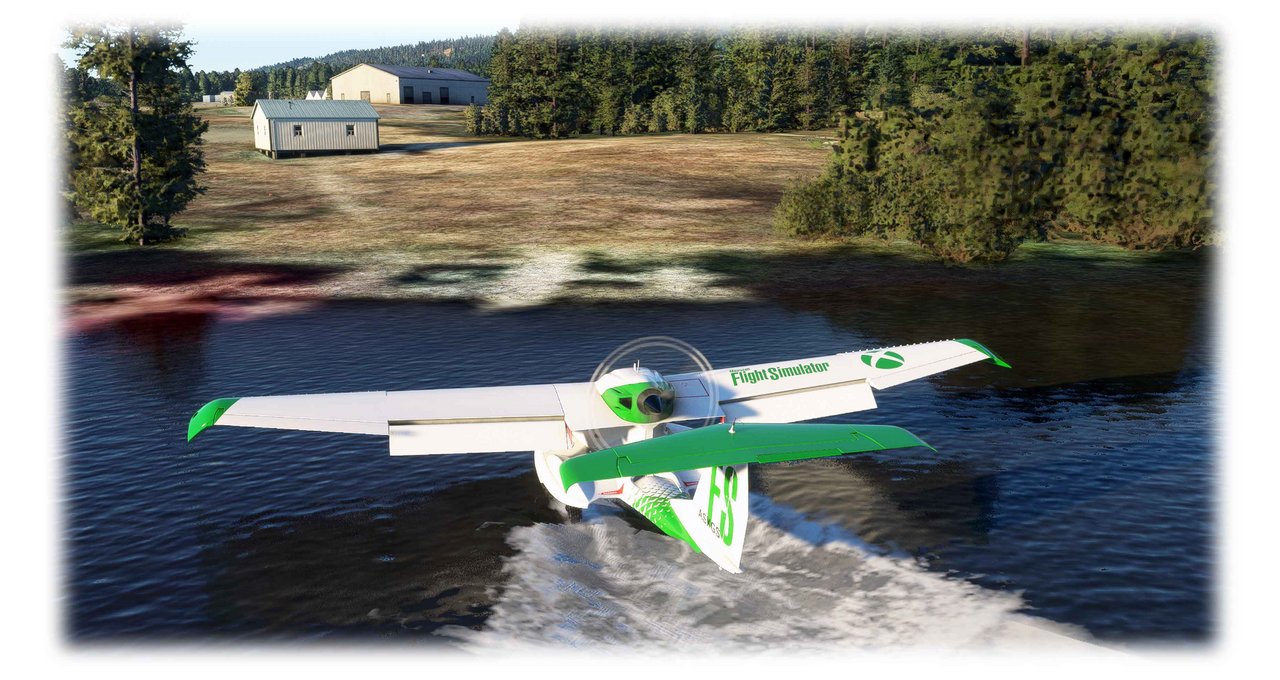 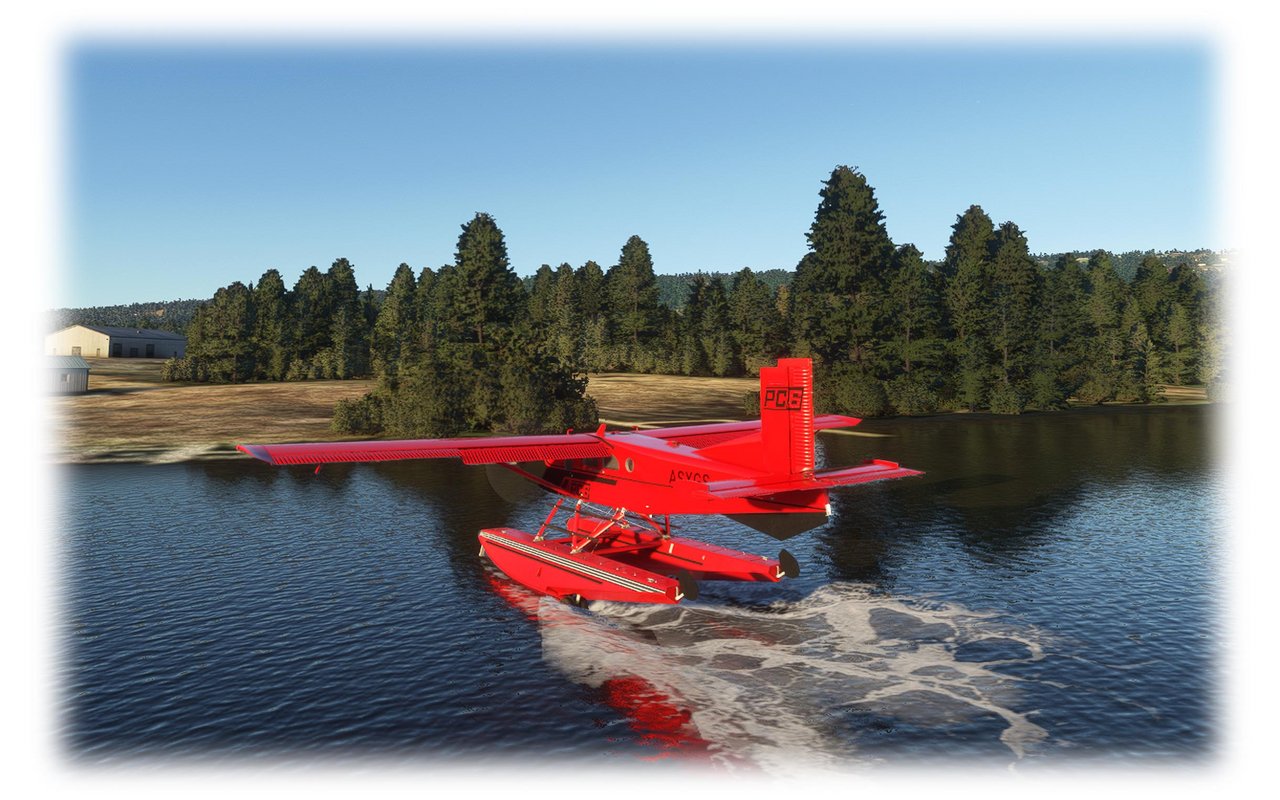 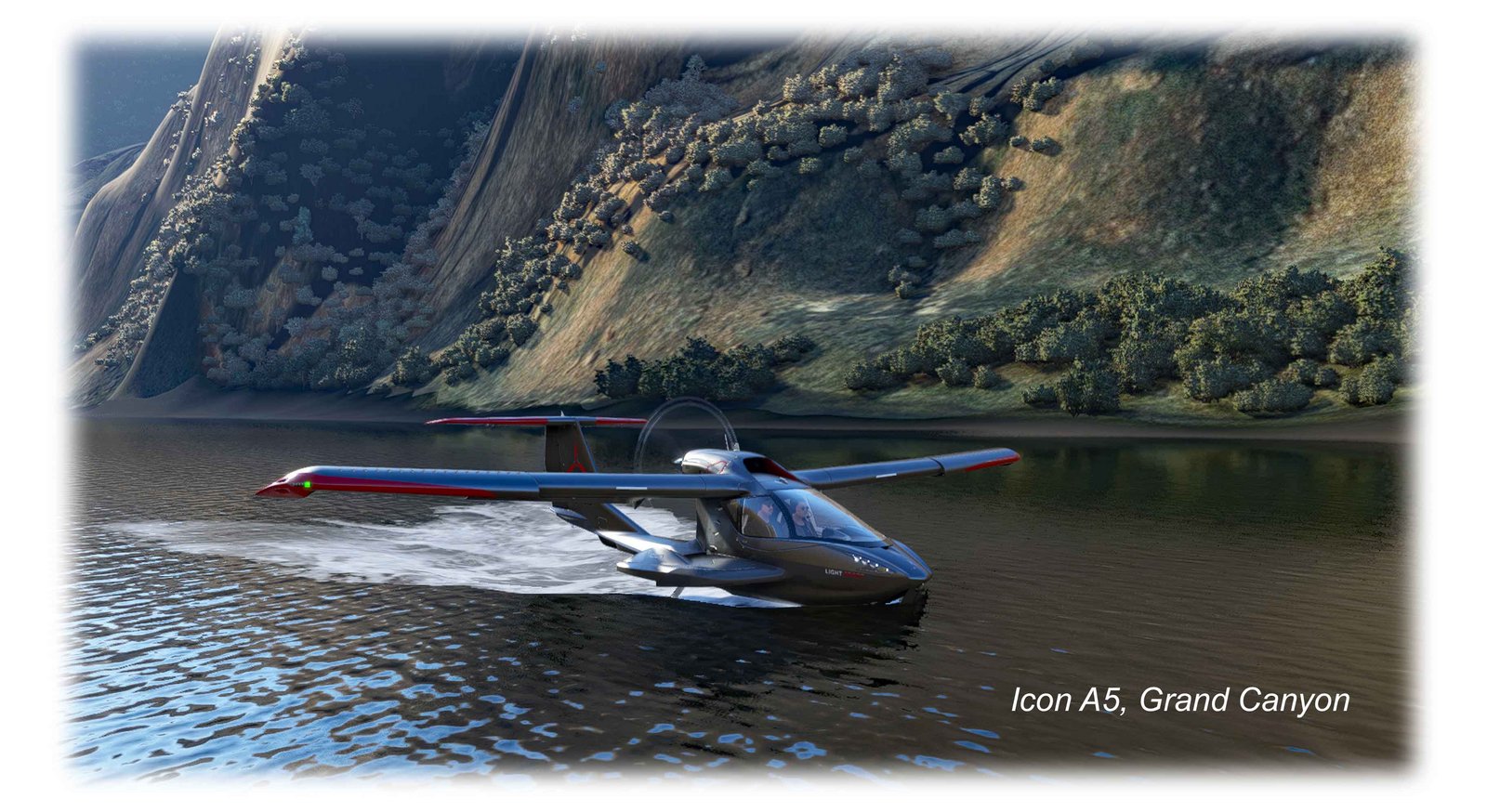 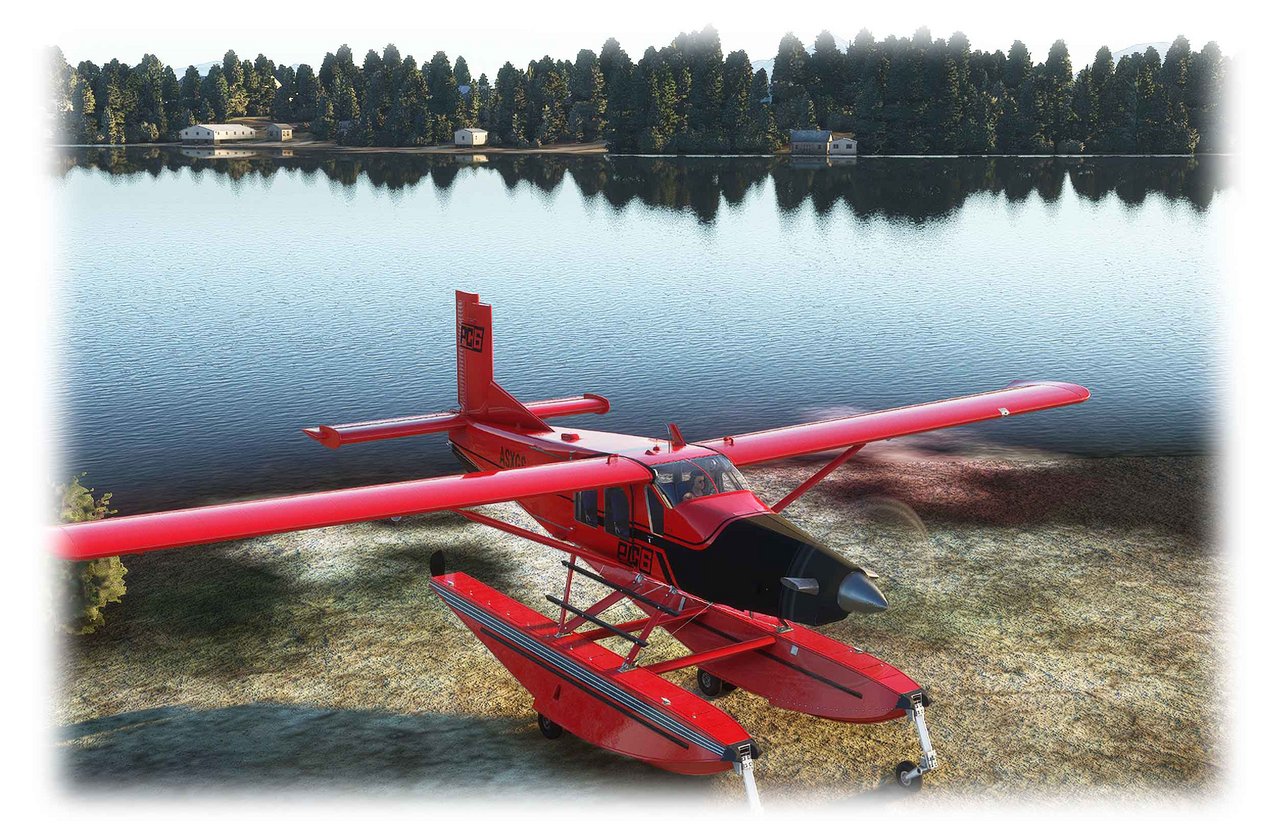 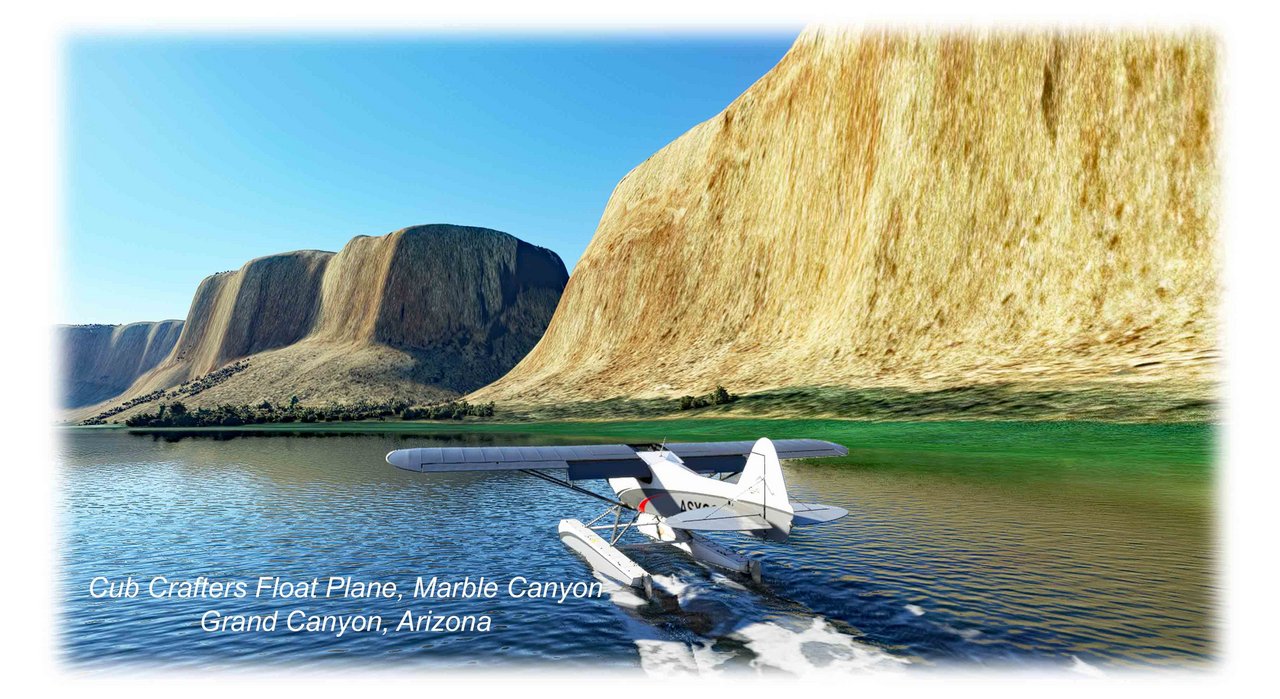 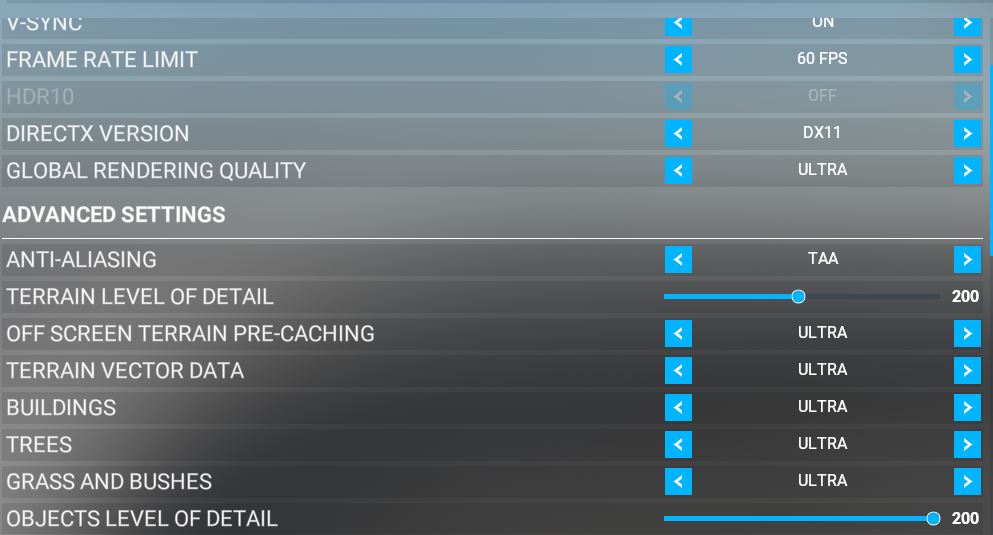 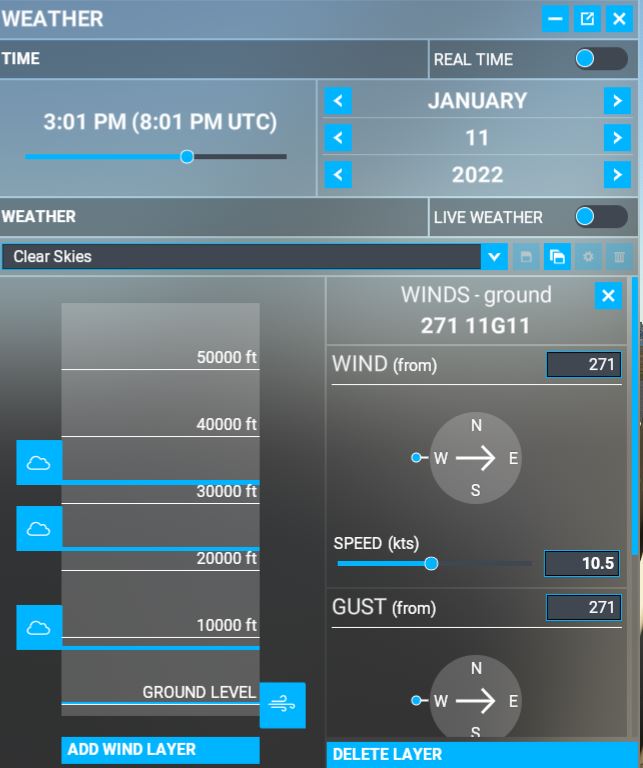