It’s time we had a dedicated ‘visibility in live weather mode’ thread!

I’m a IRL pilot. Live weather is excellent however ever since launch, visibility in live weather mode is always unlimited. Visibility never changes!

I’m fed up of flying in almost unlimited visibility.

Surely by now, visibility from the meteoblue model can be implemented in the SIM in live weather mode. Everything else (clouds, winds, temperatures) is!

Thats not true in all cases. Just yesterday flying from Barcelona to Mallorca there was quite a lot of haze in live weather, more than I have seen in some time. I could not make out the normal shade variations on the ocean at all, it was masked by the haze and the horizon was very hazy too.

What time were you flying? A late afternoon to evening flight when the sun is low in the sky there is a perception that visibility has reduced…however it’s just the way the light is reflected from the haze already present.
I’ve not noticed any proper reduction in visibility…ever.

I think your post is related to this one in the whishlist where people can vote for it. It should not only apply to weather manual setup but also be taken in account for Live weather:
Ability to change Meteorological Visibility / RVR

We’ve had two years and now we have SU11 beta release notes and so far no progress has been made in visibility representation for live weather.
I get the impression that they are trying to patch the METAR implementation - rather than using Meteoblue data - which in my opinion is not the best solution to the real problem.
The real problem: the representation of global visibility, not just within the METAR zone.
An intermediate solution could be (until they can do the Meteoblue data implementation) to have visibility transition between two METARs, although for METARs far apart this would not always be optimal - but it would certainly be better than suddenly pop-up METAR bubbles.
The best solution would be to combine the METAR data with the Meteoblue data and calculate the visibility from that.
As you approach METAR, you would gradually use the METAR data, outside the METAR zone the Meteoblue data would be used - of course without any abrupt changes.

Or, as many others have suggested: we need a switch to change between models using METAR and Meteoblue - after, of course, we have finally managed to use Meteoblue visibility data in the program.

In an earlier Q&A, the developers commented on the visibility issue that they are “working on the problem” and expect to implement visibility data in live weather by the end of 2022.

Yep still get “visibility discs” around METAR airports after SU11, unlimited visibility once away from the airfield. Annoying and unrealistic.

Looks awful. It’s a bug that has been very evidently there and 100% reproducible, about time they should atleast officially admit that they don’t have a solution. Why move in circles to give this or that edition when they can’t get the basics right? All airports reporting low METAR visibility have these fog circles without exception. 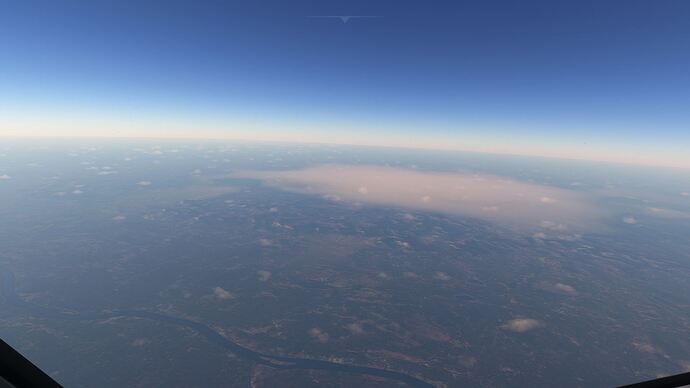 No hope that visibility will ever be simulated using meteoblue data

I too am beginning to lose all hope.
When I initially realized that we actually had an early access simulator, I was patient and gave the guys time.
But 2 years is 2 years.
I didn’t expect that they wouldn’t pay attention to key things in that time.
I still have a faint hope in SU12, maybe in 4 months we can make some minimal progress.
And I know it’s heresy, but I’ve been launching X-plane 12 more and more lately.
While graphically of course the two programs are not comparable, at least XP handles visibility, so it gives a much better representation of the atmosphere I’m flying in. In MSFS, I always get a “sterile” feeling when I take to the air.

The fact that Asobo is keeping mum about it indicates that they just don’t have any solutions for it, I’m not sure if it’s even worth expecting something in near-future updates. Maybe now they’re realizing that they goofed up when they committed to meteoblue which limits them on so many aspects (absence of true 3D weather radar api being another example).

FYI, there are a couple of open threads in the Bug weather forum related to visibility in Live weather:

Dear team, The visibility in the simulator ,even on surface is almost infinite despite local metar conditions of visibility hardly 2000M . I am surprised how feature like this is been missed?

It’s disappointing to see that after so many sim and world updates, there has been no work on the actual visibility simulation in the sim. Here are some screenshots to illustrate the actual vs simulated visibility at VABB airport Actual METAR decoded data [Actual] Sim data as read by Little NavMap [LNM] How it appears in the sim [Sim.PNG] Note: I load the live weather once the flight is loaded at live UTC time

Visibility from METAR not reflected and nor adjustable Weather & Live Weather

Reported numerously in several topics… visibility (not due clouds) is not implemented nor adjustable. Please implement this critical weather behavior. An example when looking up bad weather airports. Real METAR: VOCI 221430Z 28003KT 4500 HZ FEW080 29/22 Q1011 NOSIG SIM reported weather is not too off, 3KM visibility - see ATIS captured in the screenshot. However, horizontal visibility is unaffected. Please also vote for this very relevant wishlist topic, as it getting significant number …

I was checking visibility data in Meteoblue weather maps and found inconsistent readings as compared to actual METAR reports e.g. visibility according to Meteoblue in New Delhi right now is >20 km whereas METAR report for VIDP airport shows 3 km. The same thing gets replicated in the sim which is why visibility data is always way off the actual METAR. Meteoblue: [image] METAR: https://en.allmetsat.com/metar-taf/india-sri-lanka.php?icao=VIDP [image]

Otherwise, I’m not surprised that few people miss the representation of visibility.
A friend of mine, who flew the simulator from the beginning, was absolutely shocked after the introduction of METAR when he first encountered limited visibility inside the bubbles.
He said he didn’t even know it existed, he thought the way he had been flying was normal and should be.
My suspicion is that the majority of users are blissfully ignorant…

Meteoblue does provide visibility data. You can see it in the debug weather window. The sim won’t use it though and I suspect it has more to do with performance and graphical limitations like haze popping up abruptly.

FYI, all posts related to Live weather visibility in the Weather Bug forum have been merged into this one: Visibility from METAR not reflected and nor adjustable
So please contribute there and hopefully it will be tag as feedback-logged soon since it has now more votes.

But this topic is more about Meteoblue model visibility.

METAR visibility has already been added so that other bug topic should be closed.

Reminds me of the Live weather doesn’t match thread that got used as the reason to change the whole weather system into a METAR based one.

So maybe a new thread in the Weather/Bug forum should be created to report an issue with visibility not being applied outside of METAR zones (Meteoblue only zones) ?

Reminds me of the Live weather doesn’t match thread

Yes, that thread actually has a specific issue stated at the first post mention the 225@3kts bug that we had everywhere. That were an issue with data. Meteoblue does not predict 225@3kts all over the world. But that thread completely changed weather system/engine/model. So bad bug reporting in the forum. A bug report become a thing that changes the whole sim to be something else because the title is a subjective title. Match what? It should have matched Meteoblue. Nothing else.