When selecting aircraft for a flight we currently have filter categories for prop, turboprop, jets, and airliners.

I’d really like the ability to save specific aircraft to a favorites filter list to make them easier to locate. This would be even handier in future as we accumulate more and more planes in our collection.

Currently the list of available aircraft is separated into reasonable categories (“Prop”, “Turboprop”, “Airliner”, etc) but I spend the majority of my time in 2 or 3 aircraft. I suspect many people here do the same.

Hardly a big deal in the grand scheme of things but I feel this feature would be pretty handy - even more so once the 3rd party aircraft start arriving in large numbers.

I agree, this would be a great addition to the game. There’s an existing Wishlist thread about that over here that has a good number of votes already. I suggest you head there and click “Vote” at the top-left to raise that thread up on the Wishlist and show that it’s something many people want.

Hah, I swear I looked for a similar topic before I posted mine.

Remembering the last 3 Airports is handy, but not enough to keep my favorite airports at the top of the dropdown for easy access. It can also be difficult wading through the large number of aircraft (especially prop planes) to find the one you want. I imagine this will get worse as more aircraft are added to the game. In both cases it would be nice to have a heart or star for saving your favorite options and making them easier to access.

I agree this is needed.

The current “Large Image” method of displaying the aircraft is going to get cumbersome once we see more and more 3rd party aircraft being added.

Resurrecting this topic because we really need a favorites category on the aircraft select screen.

Beside being able to have favorite airplanes it would also be nice to have favorites on Liveries. I have a liveries Mega Pack installed and for some planes I only use a couple but have to scroll through a whole bunch before I get to the one I want. This is specially true with the Aviators Club Livery which is always the last one.

I would rather have the Aviators Club be the first right after the default. But would still be nice to be able fro have Liveries favorites.

Yes definitely. A favorites list is important.
Some of the aircraft cannot be uninstalled, and the “clutter” is frustrating.

Over time, there are more and more aircraft in the MSFS and you have to scroll a lot to get to your favorite aircraft. Wouldn’t it be possible to mark these fliers so that they can be seen in a separate tab? 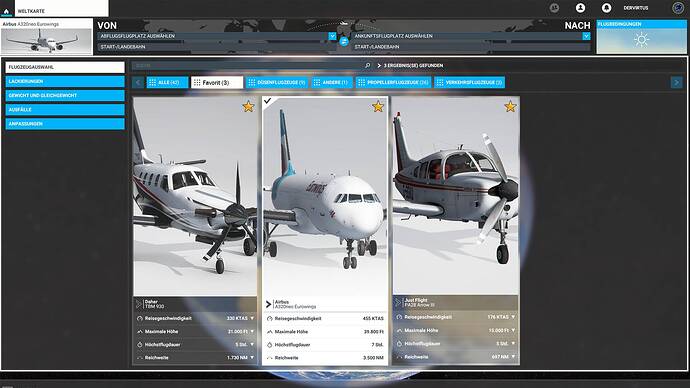 Funny exactly this setting I thought of last night! it would be great if you could mark the aircraft as a favorite and you could then only show the favorites!

Would it be possible to get a favorite functionality to box your favorite planes configured with the livery you want on top of all existing planes in the aircraft selection menu?

I can definitely see the current menu getting unwieldy as more aircraft become available. Something is going to have to be done to make it navigable.

I tried deleting the planes i never fly but on startup the sim automatically replaces the deleted aircraft. i cant seem to find the option to turn that off…

MODERATOR EDIT: This post was merged from another topic

In FSX and P3D you have the possibility to mark certain aircraft - even liveries - as favourite, and then a checkbox “show only favourites” in the list. I wish we had that in the new FS too.

MODERATOR EDIT: This post was merged from another topic

In the interim, you should be able to uninstall them so they don’t show up.

Not uninstall, just hide them from my aircraft gallery or hangar.

Although I’ve been using MSFS since December until I purchased the Top Rudder Solo I’ve only been flying the Cessna 152 with the blue livery.

Now I’m enjoying alternating between the two but the selection method of going to the hangar and scrolling through to find the plane I want is a real pain. They always default back to the original livery too so I need to change that each time as well.

Aside from uninstalling all the other planes is there way I can just favorite those two planes and my preferred livery options so I don’t need to scroll through and reselect them each time?