Hey everyone,
since I was so annoyed by the default nameplates in the game, I tweaked them a little and made a tiny package if you like to try it out yourself.

The target was to make the nameplates less obstructive but still contain all the data.
What I changed:

Feedback is welcome, hope you like it.
By the way, I’ve seen there are placeholders for aircraft speed in the sources, but I did not yet manage to get the speed to be displayed. That would be nice for multiplayer flights…

The download with instructions, preview screenshots for the variants and possibility to contribute can be found on github: 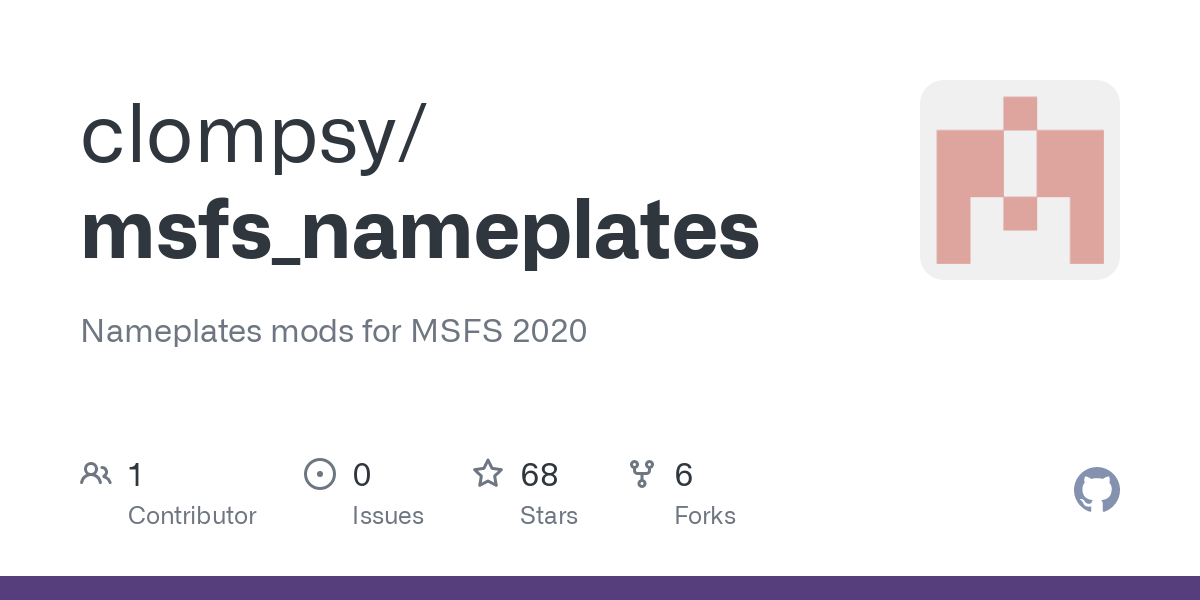 Nameplates mods for MSFS 2020. Contribute to clompsy/msfs_nameplates development by creating an account on GitHub.

NOTE: If after a MSFS patch has been installed you do not see this (or other) mod, try restarting MSFS since it seems only to pick up the Community folder with a delay.

Compatibility:
With version v2.1 this mod is compatible with the mod “uimod-mugz-hiddenui” which you can download here: [UIMOD] uimod-mugz-hiddenui
Note that you may not use “uimod-mugz-tinyplates” at the same time as this mod since they both change the appearance of the nameplates. Pick one of mine or the tinyplates one from UIMOD.

The mod still works standalone as well, so UIMOD is not required for it to work.

Also check out this post if you want to tweak the nameplates a bit further:

For those who want to tweak their nameplates further, here’s a HowTo which I don’t want to provide as a standalone mod: (Updated to be compatible with SU5) Hide numeric value from gamertags XBox appends a # with a number to every gamertag that is not unique. Since it is mostly useless and makes the nameplates even longer, here’s how to remove them: Find the file Official\OneStore\fs-base-ui-pages\html_ui\Pages\InGameMarkers\Templates\IGM_AirTraffic.js and add the following lines after li…

NICE! Looking forward to trying this out - thanks Coopersens! Now if someone could work on taxi ribbons

I dig it! My only wish is that it was a crisp/simple font and green in color. Then they would look like datablocks on an air traffic controllers radar screen.

Brighter green is hard to read on blue sky.
If you check out the extracted zip, you’ll find a css file in it and at the top there is a line for “color:”, you can try yourself if you find a better color.
There’s also a shadow line underneath containing the white shine (#ffffff), maybe having a black shine with green color would be what you’re looking for.

If you modify the color, you can see the effect if you return to main menu and back into the game. No need to restart the whole sim.

Thanks, I’ll take a look

Any chance you could whip this up with your sizing and margin fixes, but with the original background and font, color?

I’ve reworked them and added various colors including the original combination. See my original post

I’d need some feedback from people running 4K or 1440p if the font looks alright since the scaling is based on the vertical screen resolution, but should be proportional.

Since there will be some modification with the nameplates in the upcoming patch (performance), I’m not sure if this mod will work afterwards. I hope they don’t touch the stylesheet.

I checked the files but couldn’t find the taxi ribbon

So I can’t change it.
Most of the 2D stuff of the game is made from simple HTML, JavaScript and CSS. But the 3D models are harder to mod.
I hope that Asobo makes at least a toggle shortcut for them (and the nameplates).

What could be changed though are the POI/airport/gate markers, I’ll have a look to make them smaller and maybe more transparent as well.

Currently it seems like parts of the UI were created in a way that it works on a TV (for XBox) from further away, which is annoying for PC simmers…

1440p user here, I’m using the smaller but improved original nameplates and everything works very well. I might switch over to the darken green though, I can definitely see the appeal now.

Did you try a purple color?
Could be that if it were a brighter purple it might stand out well.

No, really, purple is the opposite of what I intended to to

Feel free to modify the .css file in the package, I left some comments so you can easier find the right settings at the top of the file.

Sincerely thank you for even trying! You THE MAN!

Do you know whether there is any scope for getting range inserted into the nameplates? This seems the most important omission when compared with P3D and earlier labels.

Well, there’s a script filling and updating the data of the nameplates, it gets a data array from the main code containing some values.
There are traces of the Speed being shown but seemingly they decided not to include it anymore (or yet).
The same way, they could provide more data, like distance, heading etc., but currently all data provided is already displayed.

I’m thinking of modifying it for me so that only altitude is displayed under the name, since the other stuff is distracting (on AI aircraft, the origin airport is shown, but what for??).

You might want to open a wishlist thread to include more data since that exceeds what I can do with the resources.

I’m digging the radar green. I don’t need anything more. Thanks so much!

Not sure what I am doing wrong: I unzipped the file to the community folder but still have the old name tags! Any ideas? probaly me doing spmething silly!

You should have the folder “cppr-nameplates-small-…” in your Community folder and that should be it.
Please check if it contains a folder and 2 files.
Also restart your MSFS of course.
Other than that I have no idea what could have gone wrong. I tested all the variations myself this way.
Do you have other mods/addons that work and are placed in the same Community folder?

Thanks for your help: yes its in the right place and contains the folder and two files. I have amodded Airbus in there which loads fine. One thing I do have is the main game installed on another drive and the community folder in the app location on the main drive. Perhaps that is a problem?

That shouldn’t matter, usually the “Official” and the “Community” folders are on the same drive at least and I’m just overriding one file that is in the “Official” folder.
Theoretically it could be that if another mod changes the same file, they are conflicting, but I don’t think an A320 mod would do this.

Which of the versions did you choose? Maybe try a different one to see if that helps.
Other than that I cannot really help.