Just so there is no ambiguity about the issue…this is the SPECIFIC thread for people having the 225/03 wind issue in North America and other places…please mods…delete this topic if you feel it merges with the other weather topic, but I feel this problem is individual enough to not be included with weather update issues. Please folks, upvote if this affects you too

Experienced this for the first time. Flying on the EU server and did a flight from KAUS to KHOU in the A320n.

tried to reproduce the bug at YSSY. IRL metars said wind was 19 knots gusting to 35 from Southeast. When I listened to the ATIS at the airport, it somewhat matched the live, real world metars. But it had absolutely no effect on the aircraft, and g1000’s wind pfd screen showed 3 knots.

The wind was 3 knots when I was on the ground doing nothing, or taxing, or taking off and climbing to 10,000 feet. No matter what altitude, it always stayed at 3 knots.

This is exactly what I experience! This is why I wanted to make a separate thread instead of all just “weather”.

Thank you for making this. The winds in the storm hitting Japan is 225@3. Ive reported to Meteoblue as well.

As stated in the other topic you linked, Meteoblue claims all data globally is being sent to Asobo. Asobo claims all data is being sent out via the game client (we can clearly see it works in Europe). However many regions, such as US, Asia (im sure many others I haven’t personally tested) have what seems to be an invisible wall around them where wind data is no longer being interpreted correctly by the same, and thus is reverting to what I believe to be the sim’s “default” calm wind if 225@3.

There have been many theories floating around regarding this, but I think a plausible theory is that there is some slight difference in data formats across different localities. It seems the sims software logic can make sense and reproduce european winds. However it struggles in other places, and just spits out this generic wind value.

I am working on mapping the live vs 225/03 line around the united states.

This is amazing! Ive thought of doing this as well but havent had the time. Seriously, Ive been in touch with someone at Meteoblue, if you could send this over to me when you have it, Ill share with him and perhaps it can help everyone figure this out!

No problem. On a side note. If anyone could point me to a setup tutorial for little nav map I would greatly appreciate it. I’m currently just hand marking positions on a vfr sectional when the wind changes. If I could get little nav map to track me it would be much easier.

Form the Author: Little Navmap is a free open source flight planner, navigation tool, moving map, airport search and airport information system for Flight Simulator X, Prepar3D and X-Plane and is available for Windows, Apple macOS and Linux . It provides a detailed realtime map with waypoints, airport information along with a suite of user tools such as the ability to bookmark/save points of interest during flight (great for VFR) etc… The tool is extremely configurable, sometimes to a fau…

I made a separate thread where I tested a bunch airports, focus was on the ground level wind inconsistencies.

Thanks. Not sure why but when I found that wiki on my own none of the drop downs would expand. Works fine with your link.

Yes, I can confirm. Funny detail: The sea is stormy at Naha, but the windsock hangs down. And, of course, I get 225/03

Counted at least 5 threads about this issue now. Would any if the @moderators please merge similar threads to one single thread, including adding the votes? 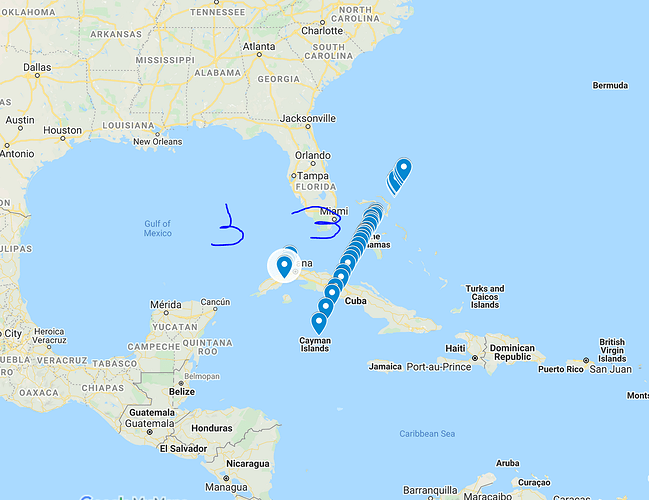 Here’s what the border is looking like south of florida. What’s interesting is that there appears to be a pocket around the north of cuba where weather works. Each marker is where the pfd clicked from a working weather (usually in the teens) over to 3

ETA: Theres a lot more than meets the eye going on here. I don’t think its just a single wall around the united states. I currently have working weather over the south of mainland Florida but I know most of the gulf doesnt work. 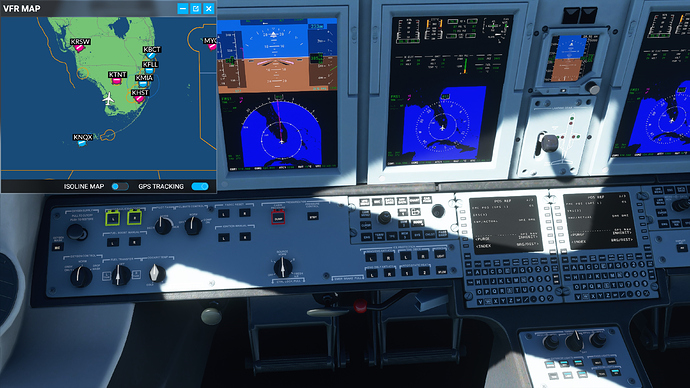 If you look at windy, you see that the metar stations only provide data around land bases. is it possible the metar data is being extrapolated in order to give more coverage? Why were they not using NOAA?

I’m not sure. Whenever I had wind values out over the sea and through cuba it correlated pretty well with the meteoblue numbers in both magnitude and direction. With the exception of the northern cuba oddity, I find it really fascinating how straight the cut off line is.

I was doing a flight KCLT - TLPL and picked up winds aloft somewhere near the Turks and Caicos (it rocked my A320 when they kicked in) and then lost them again not too long after and then they came back and were fine all the way to TLPL. Was very strange the way winds finally appeared only to go back to 225@3 and then back to live wind data.

Ive experienced a weird pocket as you’ve described when flying north from Key West. Good winds for a bit, but eventually the violent windshear to 225@3.

According to MB who’ve just messaged me back, they have just heard from someone higher up “who knows” from the development team and was told that the issue has already been fixed, and is just awaiting release in a patch. Whether or not thats this week’s patch or a future one, i dont know. But Asobo is telling MB that theyve fixed it already, and that its just waiting to be rolled out to us.

Sweet so I guess we can shut er down? @moderators