Weather transition is not smooth after SU7

Brief description of the issue:
The weather transition is not smooth after SU7. You can have clear weather and then suddenly a thick layer of clouds appears in front of you.

Detail steps to reproduce the issue encountered:
This will be difficult due to the nature of live weather. Here is my example of a flight on 19/11/2021 at 23:30 zulu. I took a flight from from LFMN to LIMF. The visibility at LIMF was reported to be 0. About 50 to 30 NM from the airport I could see clear weather around Torino. Then about 10 NM from LIMF a thick layer of fog appeared in front of me. The same happened when flying above the mountains north of Nice. Clear weather everywhere and then suddenly fog appeared in the mountain valleys below me. 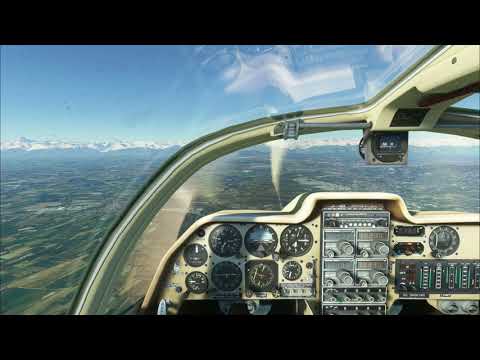 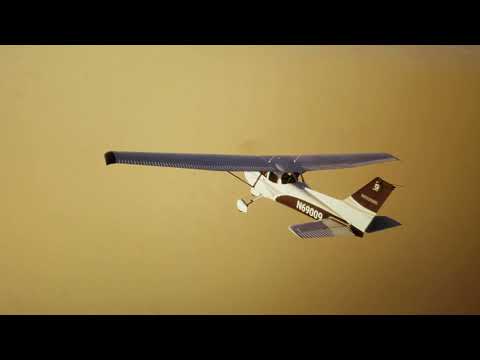 Build Version # when you first started experiencing this issue:
SU7

yes i made the same observation the fog layer transition is very hard and abrupt !

Really unhappy about this, the previous system whilst most often inaccurate compared to real world conditions, at least looked realistic. This new system with the abrupt changes is totally immersion killing and ruins the sim.

Please Asobo, flight simmers spend time in the skies, please sort the weather and make the clouds look better, rather than faffing around adding toy airplanes for silly races. Once the sim actually works start adding stuff like that but for now, please fix the sim!

wont happen, thats too much common sense. they want our money !!!

Can confirm. But, im not sure if its a one time thing or not.

I mean, i start at airport xy (ive tried at least 5). Then i have a bit of fog. I continue circling over the same area for 10 mins and now suddenly the fog is thick like a wall. If i continue another 5 or so min it changes back to the slight fog and stays like that. I wait for 30 mins now and it never changed again. Seems like its one time only, can someone confirm?

Here some pic. The visible change happened in a matter of a second.

Live weather servers seem to be back, and just had my first experience of the poor new system. Horrible transition as I moved into the next Metar area, totally different weather. Awful. Live weather was so realistic before, was so full of immersion as you could see all the different weather around you in the distance etc. All gone now. Immersion killed. Such a massive shame.

I really hope this is a bug… it would be the biggest downgrade of all times. Going back from what we had or what P3D even has with activesky, to what weve got now is a shocker, sorry.

I only hope that they at east open up the system for other devs, so maybe HifiSim or whoever can save the day again. Like they did in FSX/P3D…

@Senchay6131 Yep it is so disappointing. Just flew into Lukla.

Was totally clear, not the slightest bit of mist (BR) or low vis (4500), so the METARs aren’t even being injected in, and yet the nasty transitions are present. Pretty annoyed tbh.

The live weather is glitched pretty bad after SU7.

For some reason everywhere is cloudy and foggy even if it shouldn’t be.

something is fishy at least yes.

But im trying since an hour now to make the weather reload and somehow it doesnt seem to do it anymore.

Will see … but something is going on

its also looking really weird sometimes now, with the lighting etc. Not sure if thats from the fog or what but it looks weird. The colors are not the same anymore, my reshade profile doesnt do the same anymore too.

I wish they had the Rockstar Mentality when it comes to releasing a new feature (yes I realize rockstar screwed up recently).

That is if it’s not good, just don’t release, say hey look i know we said we were going to do this, but right now it’s not good and it doesn’t work or blend right, we are going to hold off until we figure out the best way to implement this.

IMO the only way we will get real-to-life weather is with a satellite of CONUS and other countries’ real-time via IR. IR can spot high clouds, low clouds, but until then, just use the model data and get better at what you already have going. Why take a step back?

I honestly think MS is bullying Asobo to release on schedule or they will have to pay a fine or something. I don’t think they’re a bad team, I think they’re just rushing things because they have to.

Well that was clear as the “Amen” in prayer when going back to metar based engine. I know there were various discussions regarding “inaccurate” weather and missing features - like the lack of visibility etc. - bothered me too BUT - it was clear that METAR wouldn’t work without abrubte change - at least not as fast.
It took Damian Clark (ActiveSky) decades to get this right (also because of a bugged FSX and P3D engine) and he knows what he is doing (which does not mean that the Asobo team does not know)!
I hope they get it right, that was always the reason to quit flying and turn off the PC. (some may not mind but for me it takes away all the immersion).
The problem is, getting that smooth is incredibly hard, especially when visibility layers are added and with METAR it’s not METAR: LOWW 190750Z 29019G29KT 9999(smoothing to xxx value) SCT033 (smoothing to clear) 10/03 Q1027 NOSIG - it’s just a hard transition and getting that smooth in a certain radius and changing METAR values at the same time, then a smooth transition to a 12 hour old forecast,hmmm, well I keep my fingers crossed !
Why not just add another option - METAR based Airport data with Live Weather and you can turn it on and off as you like.
We already have “unreal weather” tool and REX Weather Force 2020, both METAR based - why can’t you “just” (probably not as easy or they would do it) limit the forecast to e.g. 2 hours instead of using 12 hours data, would iron some things out.
Yes we will see, I am hopeful !!!

Confirmed. I was exploring the Roman countryside and the live weather matched the real one (clear skies and 12 °C OAT), when suddenly a thick fog appeared and reduced the visibility to zero.
I tried to switch live weather on / off and it was the culprit. 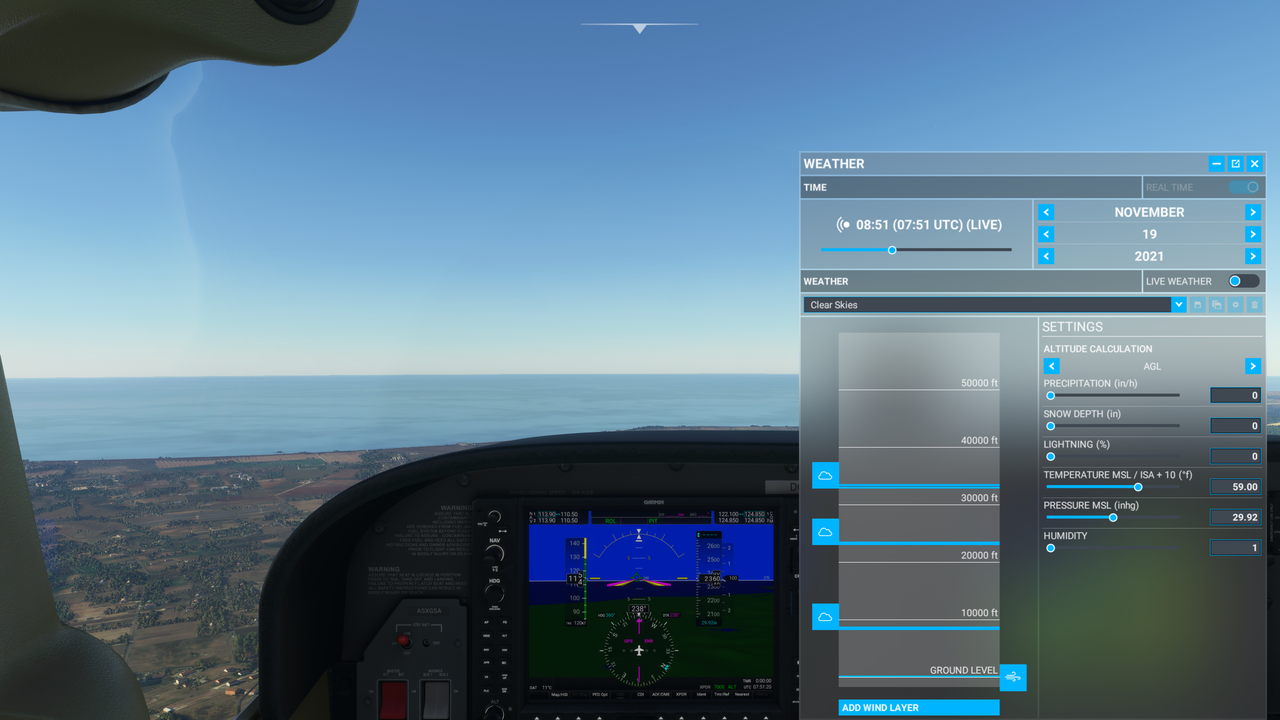 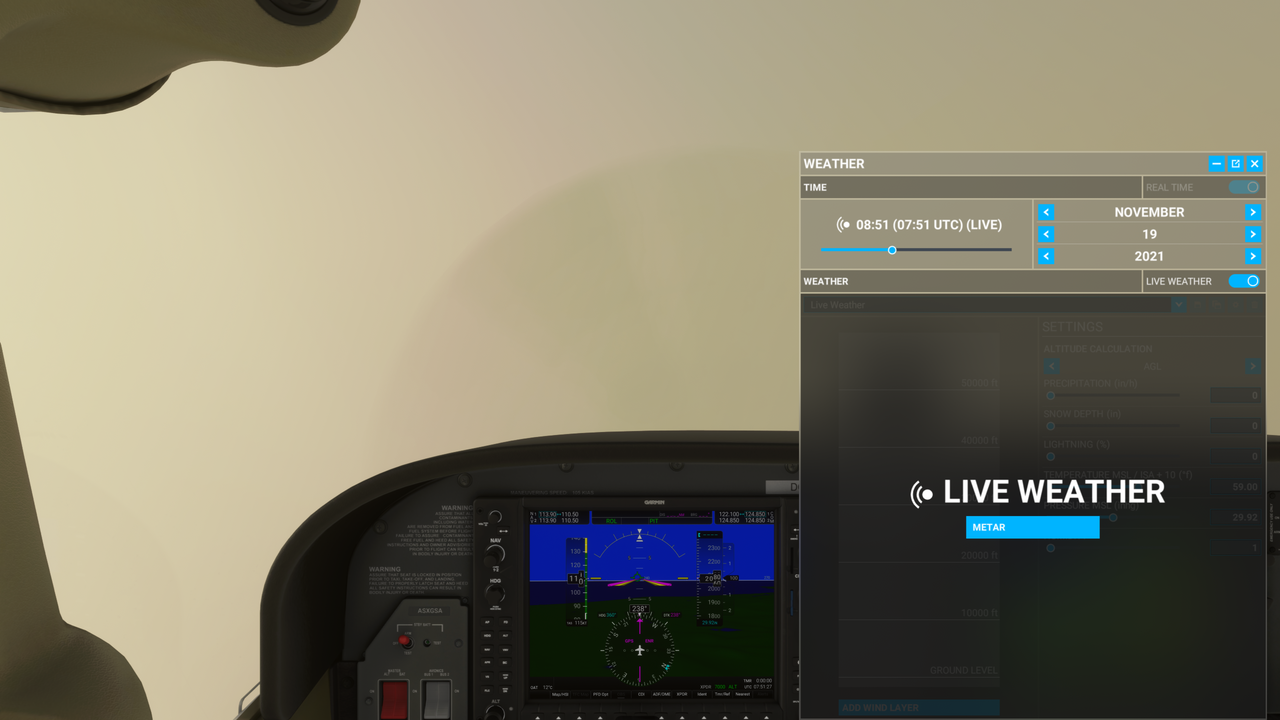 I’ve not experienced this yet. Although while doing some landing practices last night I think I saw clouds shift in my peripheral vision.

When I read about the injection of METAR into the weather system, that would lead to better bending of forecasted weather I thought that sounded good.

But if it ends up being like that in X-Plane, where the weather abruptly changes on approach, not so much.

Add to that the ■■■■■■ haze line as you approach the ground! (Facepalm) 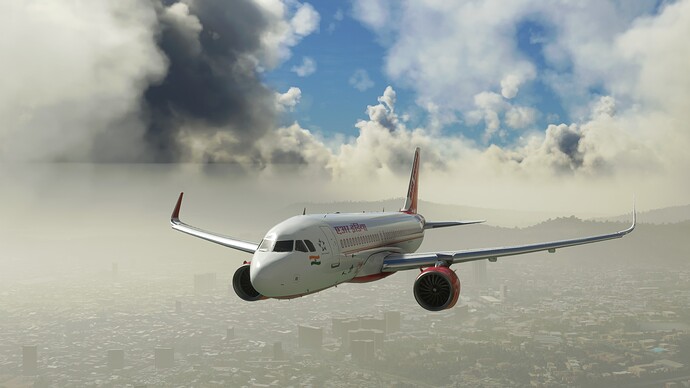 Something is for sure wrong with the weather, a massive drop in fps (live). Clouds are to close to the ground and a haze. Never had this issue from the beginning of msfs and was alway happy with msfs. After this update that went south. Hope for a fix.

Yes, I was flying yesterday at Miramar (I think the busiest place in the sim the first gay of SU7) and in one second the weather changed from clear sky to 6/8 clouds:) I expected some problems with the implementation of METARS, but not directly over the airport:)

It is also true for the wind. Variations are not smooth and you have overspeed with the FBW A320.

and here we are again FSX weather depiction 20 years ago !!!
why did I know it when I saw the announcement!
I can only confirm everything, test flight from LEIB to EDDS, it seems that only the data from METAR stations are interpolated and it is almost everywhere the same weather, everywhere the same cloud types, as I said FSX sends its regards and thus MSFS is not usable for me - please back to Forecast version !!!
Please make a beta option for this, is not usable anymore at this state !!!
all those beautiful smooth clouds are gone, windshifts all along the flight and everywhere the same clouds, really looks like FSX, please don’t, not again !!
Could it be that the weather servers are offline ?
screenshots: